Adventure In The Ice

As I said in an earlier post I've been reading a bit of Napoleonic naval fiction recently, specifically the early books in Richard Woodman's Nathaniel Drinkwater series. I rather like this series - the main character serves in an eclectic variety of ships, and adventures in some interesting locations, including the Red Sea and the North Pacific coat of the Americas. He even contrives to be at Trafalgar, but in a rather unexpected role. I'll leave that for you to discover, however.

Anyway, one of my favourites is the fifth book in the series, 'The Corvette' when, in the immediate aftermath of the end of teh Peace of Amiens, he is given his first post-captain command - a sloop - and sent to protest Britain's Greenland whale fisheries from possible French raiders. Again, I'll leave his various adventures for you to discover, but there's plenty of exciting ship-based action in the ice, so I felt inspired to play a game of some sort in such an environment.

Galleys & Galleons includes some rules for icebergs, and I'd played a game using them a few years ago. So I set it up again. I hadn't noted the ship designs in the previous game, so did them again.

I went for a 16th/17th century setting, since that's more suited to the ships I wanted to use. Here we have some French whalers/fur-traders, heading home full of the riches of the Arctic.

(There are four of them, but one somehow got cropped out of the picture) 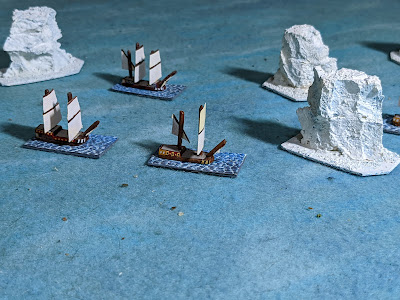 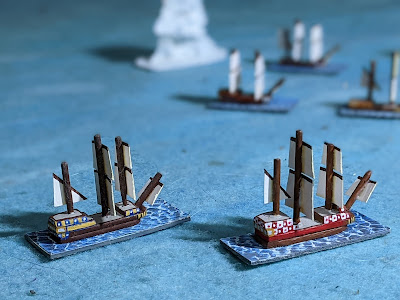 I randomly distributed four icebergs and a large island, then randomly rolled for wind-direction. The French could choose their corner of entry from that - they're trying to get to the opposite corner - and then the English could choose their entry point.
The wind was directly astern of the French. The icebergs would drift to the right; directly across the course the French ships would have to take. 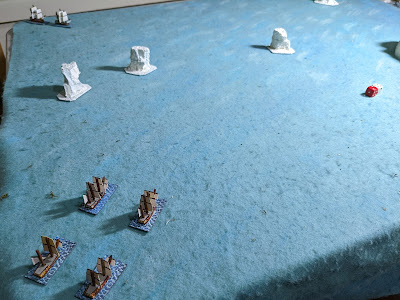 This time all four French ships are in the picture. Their gunnery isn't much to write home about, but they're tough. 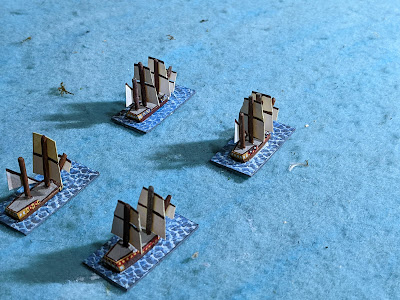 Most of the icebergs were in a line, and the French aimed for a large gap between them, hoping to slip through into the open water beyond. 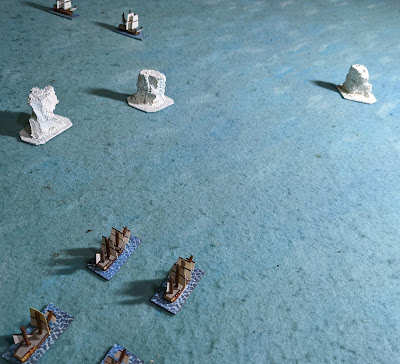 However the English moved rapidly and plugged the gap. The French ships turned away. Their better option was now to tack, head back the way they came and pass behind the ice as it drifted to the right of the picture. In fact this would have been a better option from the start, but I'm good at coming up with terrible plans. 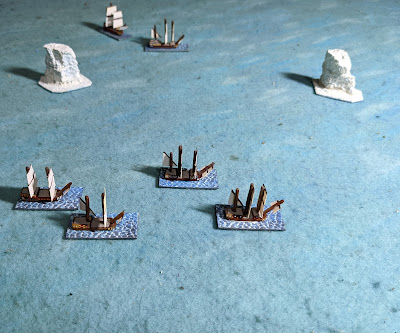 One French ship did try the gap, but the English had it well-covered. 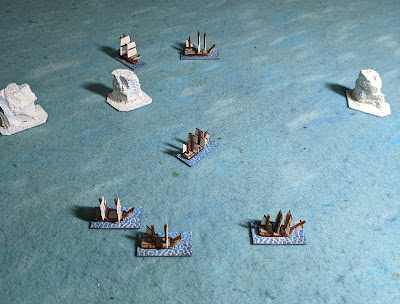 For their own part, the English decided to push their galleons through the gap and engage teh French. The first galleon to try this ripped a hole in its bottom passing too close to an iceberg. 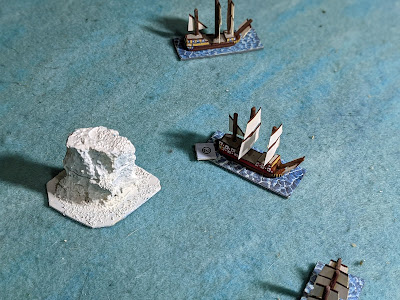 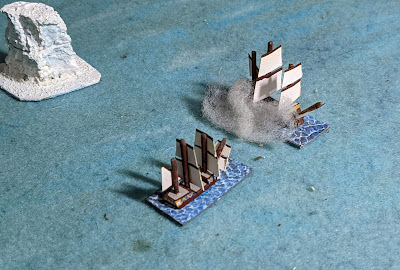 The French began to turn, but as they did so the wind veered, staying on their stern-quarter the whole way. 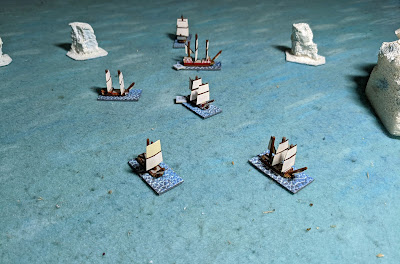 The second English galleon passed by the ice. 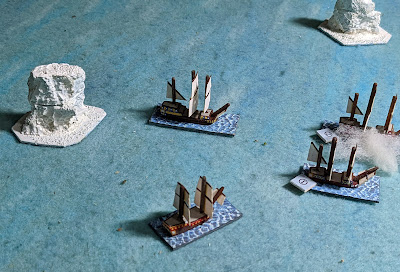 It cut things too fine though; an iceberg drifted into it and it was lost. 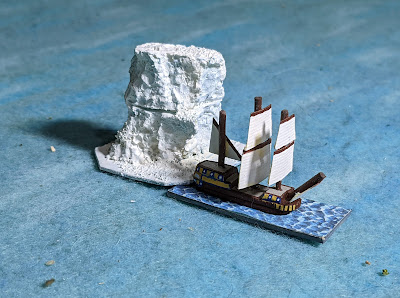 The English now had a single, badly damaged galleon, but kept up the fight, damaging the rigging of a French ship. 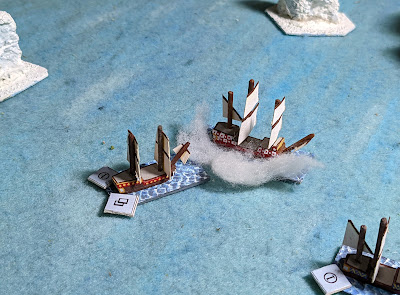 The French continued their slow turn. One of their ships strayed off course (bottom right) and eventually left the field of battle. 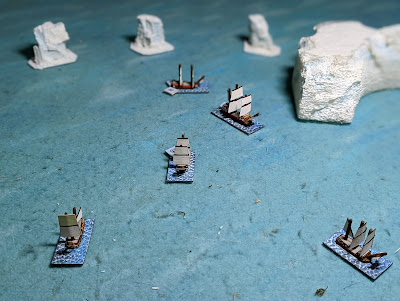 The English galleon harried them as they turned. Both sides actually engaged in little firing, as they were expending all of their actions to turn and shorten sail so as to avoid crashing into ice and each other.
This shot set one of the French ships on fire. 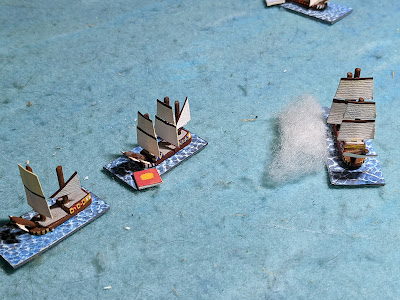 The big turn continued, as the crew of the French whaler battled to contain the fire. 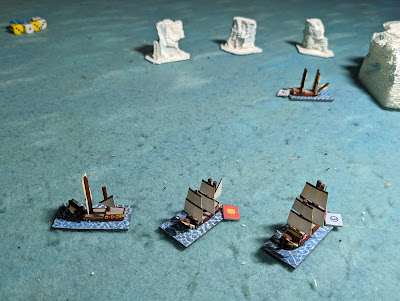 And they did it! Just in time for the galleon to collide with them. The sturdy French ship survived the collision. Not so the galleon; the collision was one step too far, and it started to sink. 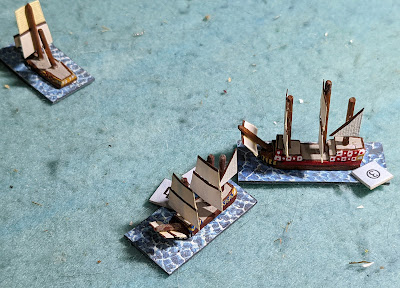 This really ended the fight, but I played for a few more turns. After all, the three surviving French ships still had to get past the ice and head for safety. Two of them slipped behind the main flow of the ice, as the wind veered to the opposite direction from which it had started. The final ship still floundered by the island. 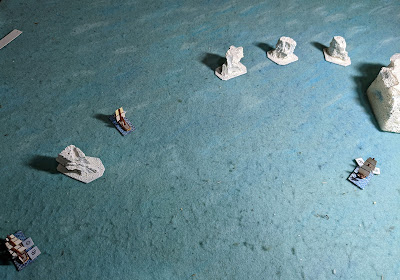 However eventually even the straggler made it through. 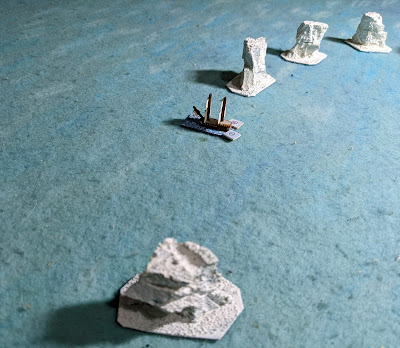 So the English lost both galleons whilst the French had one ship wander off the edge of the world. Maybe it will get home. Maybe not.
All three ships were damaged (one had engaged in some running repairs). But they'd get home. 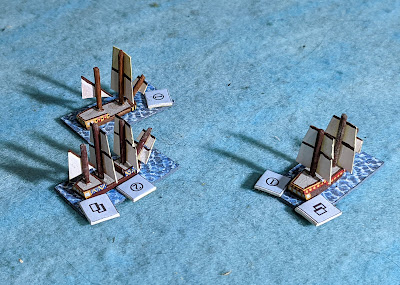 I think the next time I try this I will have fewer icebergs. But the tight and dangerous terrain made for an interesting game.