I played a blast from the past yesterday evening, when I dug out my copy of the 1982 game Illuminati (plus its two expansions) for our semi-regular Wednesday evening boardgame. It was inspired by a discussion on Twitter about old Steve Jackson games.

For anyone that doesn't know, in Illuminati each player takes on the role of a super-secret society trying to take over the world. They do this by taking control of various groups and organisations, which can themselves take control of groups, creating a power-structure of  control.

Each illuminatus has their own special ability and also, which was a bit innovative at the time, their own victory condition. So each one plays differently and is also aiming for a different target to the others.

Here's the early setup - I had The Bermuda Triangle, which has the ability of a fluid power-structure and is aiming to collect at least one of each of the possible group alignments available. Maya had The Bavarian Illuminati, which has raw power and secrecy as its ability, and is simply looking to accumulate power. Finally Catherine played The Society of Assassins, who are masters of neutralising the power-structure of other illuminati, and aim to collect violent group.

You can also see the big pile of money and in the middle of the table the first batch of groups we'd be fighting over. I'd captured one - the KKK - but we had Local Police Departments, The United Nations, New York, and Mad Scientists up for grabs as well. 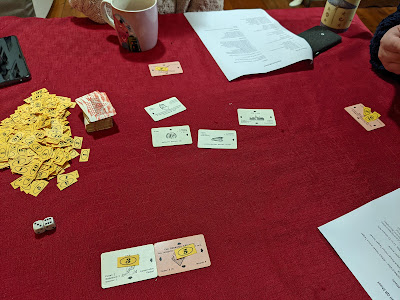 Here's the start of my power structure - my illuminati and the one group it controls. Each group has a Power (how well it makes attacks), Resistance (how easy it is to take over) and Income (how much money it generates each turn). They also have one of more Alignments, of which there are ten. As you can see that KKK is classed as Conservative and Violent. Most alignments have opposites - Conservative is the opposite of Liberal, and Violent the opposite of Peaceful, for example. It's easier to take over groups with the same alignments, and harder if there are opposite alignments. It's easier to destroy groups with an opposite alignment though. The arrows show where the group can attack subordinate groups - the KKK can control one group directly. 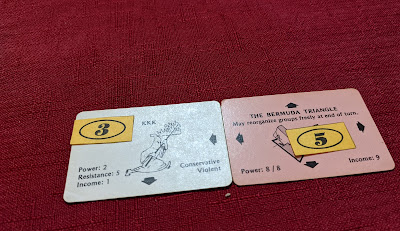 This is my structure a couple of turns in. The KKK allowed me to take over the Local Police Departments (both are Violent), but I also took over the Phone Company as well, and moved the Police under their control. 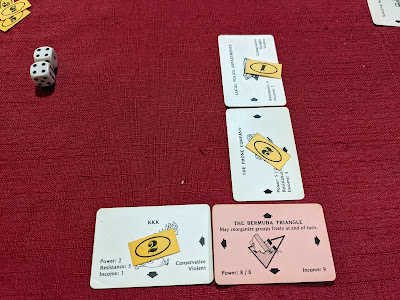 And a couple of turns later ...

As you can see I've reorganised a lot (my special ability). I'd picked up the Mad Scientists (which have useful power that can be added to the attacks of other groups), but also attacked Maya's structure and taken New York off her. Since New York controlled the United Nations I picked up that as well. 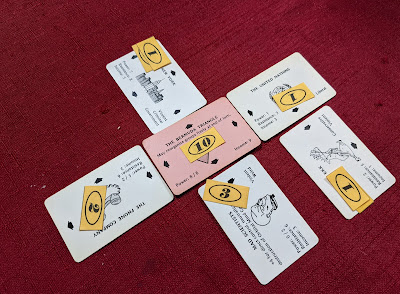 There are three types of attacks. You can attempt to control a group, whether uncontrolled or in another player's structure. This is the commonest type of attack. You can also neutralise a group in another's structure. This has the effect of returning it to the uncontrolled pile; not as directly useful as controlling it, but easier to do. The Assassins are particularly good at this, so you have to watch your structure when they're around. Finally you can simply destroy a group, which removes it from play - we did that just once in our game (destroying Comic Books, as it was a Violent group that the Assassins couple pick up), but one illuminati (the Servants of Cthulhu) actually wins by destroying a certain number of groups.
Anyway, here's the board later in the game. Despite losing New York, Maya was building up power with the CIA and Nuclear Power Companies. Catherine had collected a few Violent groups, partially by neutralising a couple from my structure and then using a second attack to take them over from the uncontrolled pile (groups in a structure are harder to attack, especially if they are close to the illuminati). 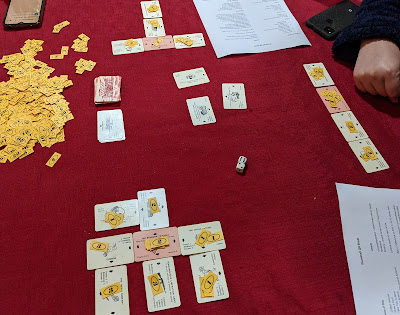 The Assassins. They had taken the Mad Scientists and Local Police off me. Her raw power came from controling the Pentagon and the International Communist Conspiracy. 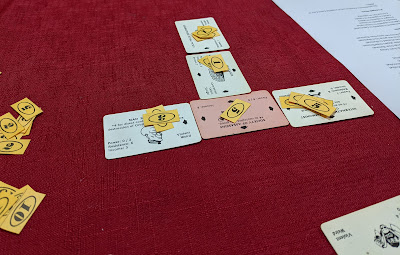 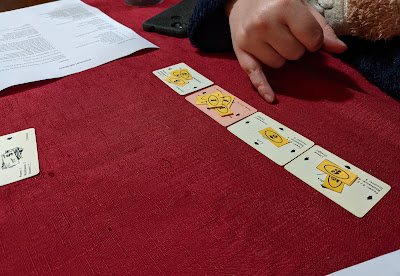 My structure was larger, but had less real power - New York and the Phone Company were my main weapons at this stage. I did have some decent incomes however, and kept money flowing from my lesser groups to teh heavy-hitters in order to boost their attacks. At this stage I'd also reached the point where I had nine of the ten alignments I needed for victory, and neither Maya nor Catherine had noticed. I'd managed to pick up some of the least common ones as well (Peaceful and Fanatic are both hard to get). 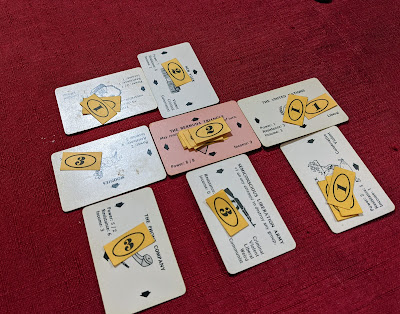 I just needed Straight (the opposite of Weird) to complete the set, and the only Straight group in play was Big Media in Maya's structure. Fortunately both she and Catherine had drained their treasuries in an earlier turn, so I did some careful money movements, and then struck, swiping Big Media with New York to win the game. 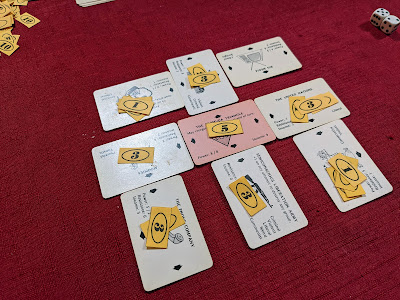 Sadly I don't think I'll get away with such an obvious win in the future.
In terms of gameplay this is very much a game of its time, as is the choice of groups available. It's a game that's dated badly in a few places but which is also still strangely relevant in others. However it was surprising how easy it was to get back into it after 35 years and we all had a good time.