After a long break we dragged Blucher out of the rules archives last night. Rather than use figures we simply used the cards from the 100 Days box, and played a scenario based on Quatre Bras. Ralph did a good job of setting up what was a mostly two-dimensional game. 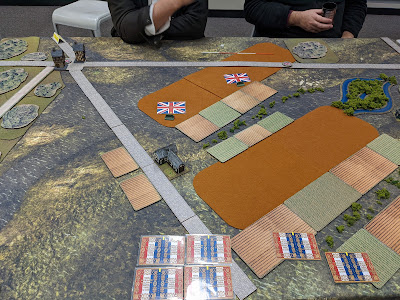 Here we are setting up. Dave and Theo on the left were deciding where to deploy the only two units they get at the start of the game. Meanwhile Caesar was organising the initial French attack. I also played French and Ralph refereed. 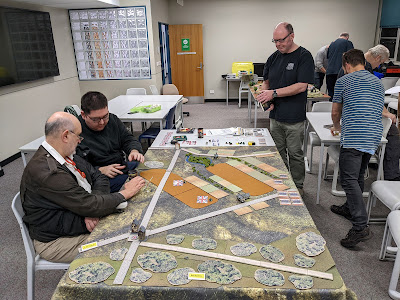 We were fairly rusty on the rules, but soon picked it up again; Blucher is not complicated. Here's the main French thrust. We also sent some cavalry on a wide sweep to the right in order to cut the road to Ligny, which was one of our victory conditions. 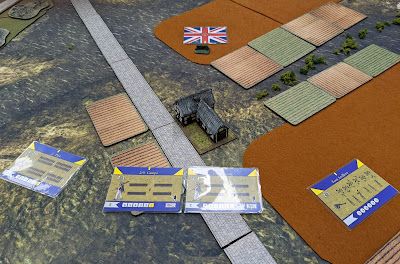 And a turn or so later this was the position, with the French mounting their first attacks, and Allied reinforcements coming up. We'd formed a gun-line along teh southern ridge, but needn't have bothered, since my dice rolling was terrible - I rolled over thirty dice for artillery during the course of the game and score precisely one hit (you need a six). 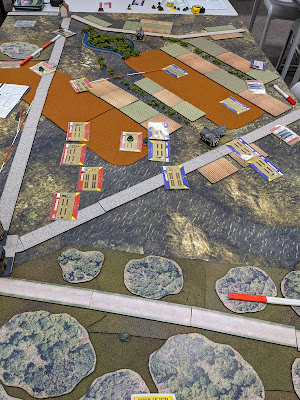 Two massed units of French went in against the advanced Dutch-Belgians. The French still lost. 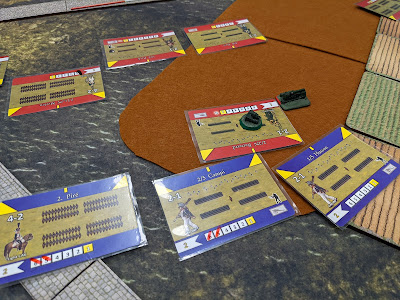 My first success of the evening; Allied cavalry attacked one of our artillery batteries, but the gunners saw them off. Apparently they could hit things if they were at point-blank range. 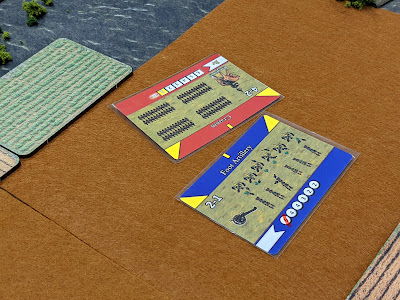 More French arrive and we were starting to create a viable threat to Quatre Bras. We even got lucky and brought D'Erlon's Corp on. But time was ticking away. 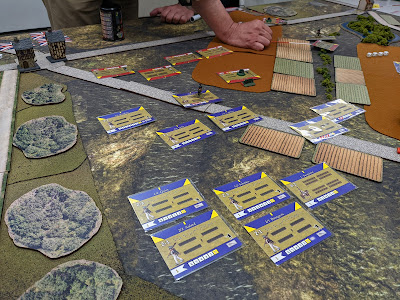 Final positions. The French never got to mount their main attack, so Quatre Bras stayed in allied hands. But the French held the road to Ligny, which was the other objective. So the battle was a draw. 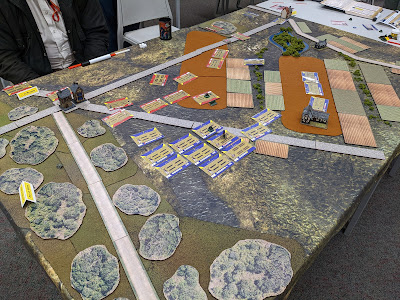 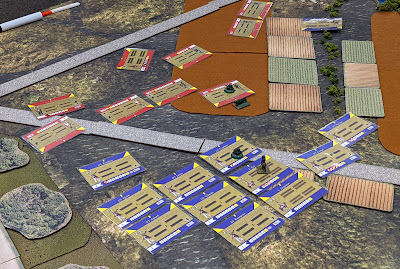 It was actually quite fun to get Blucher out again after what's been quite a few years. My die rolls for the evening were mostly awful, but this did translate into one advantage for teh French - we got to roll teh Allied PIPs each turn, and my low rolling didn't desert me there; with 3D6 they never got more than 10 points in a turn, and scored as low as 4 at one stage. Had the Allies needed to maneuver they would have been in a lot of trouble.
One small issue with the scenario is that arriving troops that are face-down can make a reserve move which can be over a considerable distance if it doesn't go close to a visible enemy. This makes the initial Allied setup quite tricky as it could leave the French able to slip through a gap and grab objectives on the first turn. We didn't really come up with an answer to this.
After we'd packed the game up, Caesar and I played a quick game of W1815. It was the closest game I've ever played, with both sides reaching their army breakpoint on the same turn, something I've never seen happen. Wellington had led a general advance hoping to break teh French, who held and counter-attacked with teh Guard led by Napoleon. This didn't quite defeat the British, who made a final push with Orange's troops. Both sides took a casualty and reached total army collapse, but it's the non-phasing player who checks morale first, so the French lost by a bee's dick. The Prussians were barely noticed.
52 Games - Game 46
Posted by Kaptain Kobold at 18:30