I've reported on various games of Lasalle being played at our club over the past couple of years - ours was one of the playtest groups - but yesterday I bit the bullet and actually played it for the first time.

It was a training game, with a few of us on each side and Ralph and Caesar keeping things moving.

Here's the setup. It was a Peninsular War game, with a strong French force on the left looking to force the stream across the middle of the table and capture two out of three objectives on the other side - two garrisoned villages, and a point just beyond the wood at the far end of the table. The defenders were a mix of British and Portuguese troops of variable quality. However they were expecting reinforcements, so the French had to get a move on. 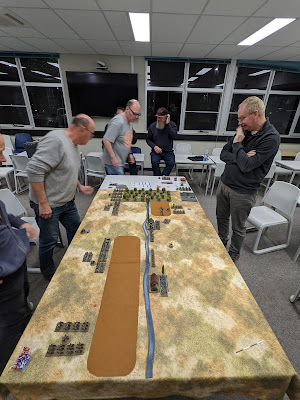 The two villages, defended by a thin line of Portuguese. 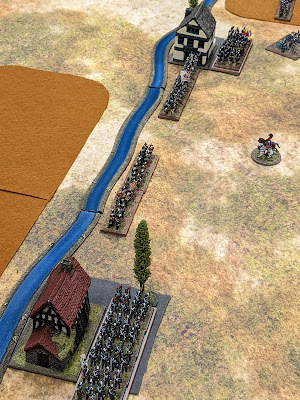 Our plan (for I was on the French side) was a big push on our left, through and adjacent to the woods, and a second push in the centre to split the Portuguese force around the villages. On our far right our two units of cavalry were to cross the stream, harass the enemy rear and try to pin down the reinforcements. Here they are, heading off into enemy territory. 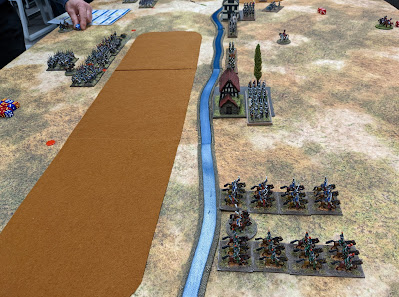 French columns in the centre, cresting a hill. Lasalle uses Momentum points to control how many actions an army can take. However the turn sequence is variable; you can mix movement, firing, rallying and combat during the turn. Certain actions, however, pass the initiative to the other side. Effectively each side determines how much Momentum it has at the start of a turn, then one side performs some actions until they pass the initiative across, and the other side does stuff. They may pass initiative back, and the two sides keep going until both run out of Momentum or simply choose to pass. Actions affect either a force (basically a brigade) or can affect the whole army.
So here the French have crested the hill and moved towards the stream. Close proximity to the enemy not only slows them, but passes initiative to the other side, who responded by firing. They then performed more actions before passing initiative back to the French, who returned fire.
Once you get the hang of it, it's a neat system, and there are some interesting choices to be made. 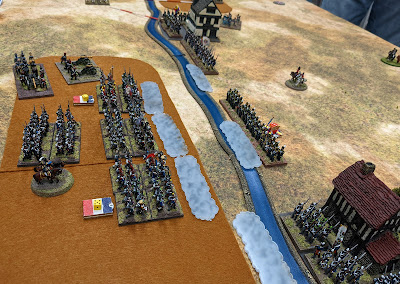 On the left flank the French were emerging from the woods. There are, as you'd expect, some 'national characteristics'. The British get bonus dice if shooting in line, for example, whereas the French pay less Momentum to charge if they are in column. 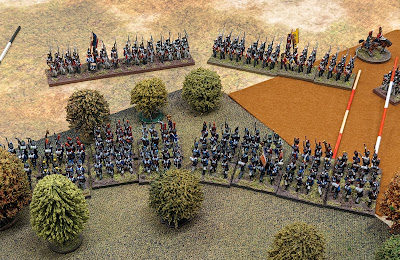 And charge we did! After taking some accurate fire from the Portuguese we rallied then charged in. Two columns smacked into a Portuguese unit which simply turned and fled. 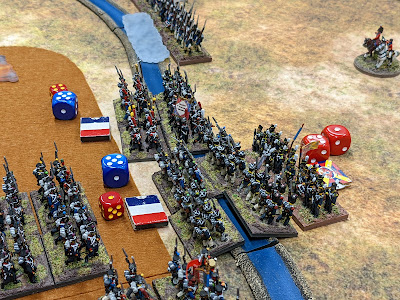 A French charge on our left did less well, being easily repulsed by some steadfast redcoats. 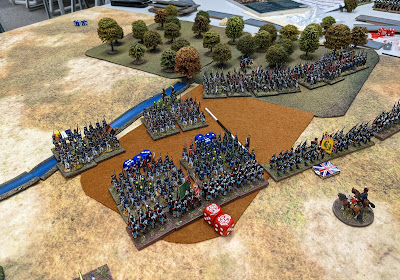 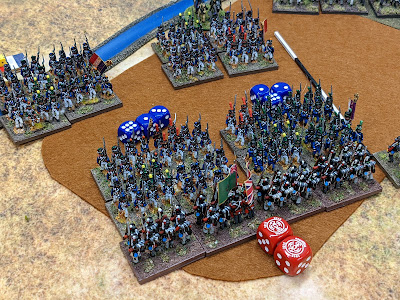 A random shot of our brave soldiers about to ford the stream. 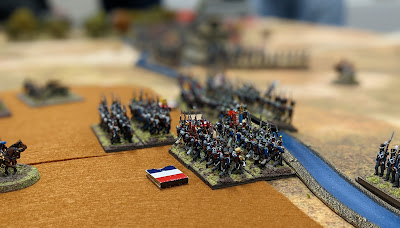 An overview. The French were slowly pushing into enemy territory, but the Allies had got lucky and managed to get their two reinforcing brigades on as early as it was possible to do so; a typical shabby trick by that Wellington chap. On the left of the picture you can see more British infantry arriving. Out of shot on the bottom left were their cavalry. 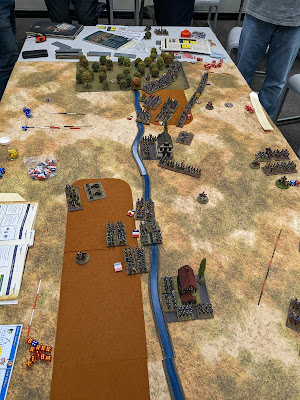 And here they are. As the French cavalry formed up to seep majestically across the Allied rear, their British counterparts arrived, and teh inevitable cavalry melee commenced. It actually went fairly well the first French charge saw one British unit break, although a second attack saw a French unit fall back. 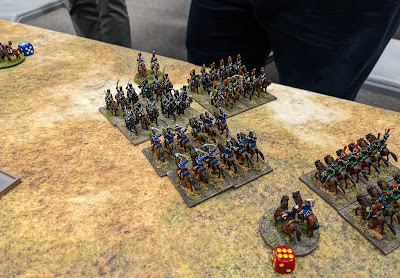 Meanwhile the British reinforcements formed up in the centre. 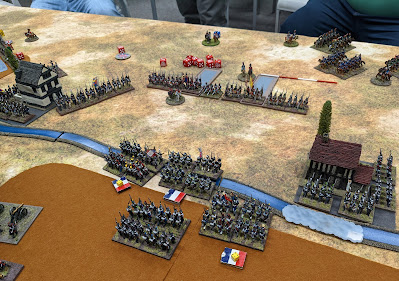 At this point we had to end the game, which was a shame as it was shaping up very nicely and could have gone either way. If our cavalry prevailed then it would threaten the Allied centre from the rear, allowing our infantry there a crack at the now-isolated village on our far right, which was only defended by conscripts. On our left we had plenty of troops in play, ready to break through and take the objective there, and had just turned the Allied flank, in fact. However teh Allies still had plenty of fight left in them.
I've watched a few games of Lasalle, but it was great to actually play for once. It's a Sam Mustafa game, so some of the mechanisms felt familiar; parts of it feel similar to Maurice, for example. But the initiative system is excellent and keeps both sides engaged throughout the turn, as the actions pass back and forth. Would play again!