One of the fantasy/lacepunk elements of Galleys and Galleons is some alternative means of propulsion aside from sails and oars. You could have a primitive steam-engine instead, or be a flapping ornithopter. Or have a means of propulsion that is more ... unorthodox. This represents means of propulsion which are unstable or unpredictable. The ship may move twice in a turn, but each movement costs and action and the distance is random. It makes controlling a group of ships quite awkward.
I have reservations about the fact that this means of propulsion costs points whilst being, in many worse, worse than the Galley trait it most resembles and which is free. I have been considering some changes to it, but haven't settled on anything definite. What I thought I'd do is play a series of test games and just get a feel for how it plays.
For my first game I set up two equal forces. The first consisted of three galleons. Their movement trait is Galleon-Rigged, which costs roughly the same as the Unorthodox trait. 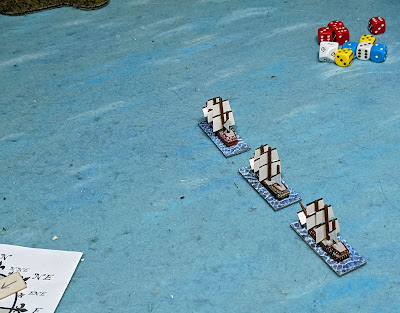 Against them I pitted three of the Ivory Towers of Balnibarbi, propelled by the Unorthodox trait. All ships on both sides were Q3 C3 and had Chasers. 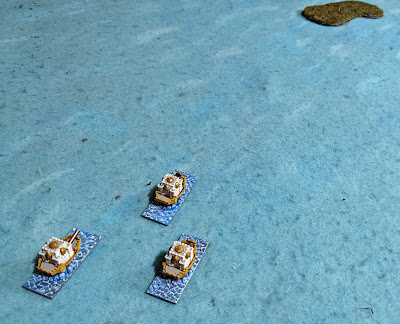 Naturally the galleons had to work with the wind, which was wildly changeable. But the Ivory Towers had to contend with maintaining a formation when movement required actions and the distances were not constant. Eventually both sides ended up on a heading towards each other.

Opening shotes - a galleon fired its chasers at an Ivory Tower, which closed up and fired its broadside. 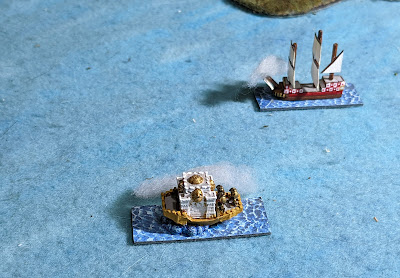 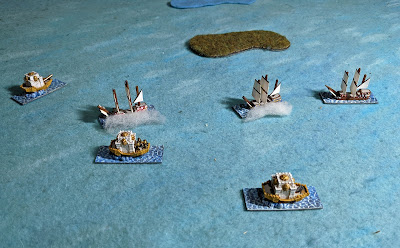 Both sides were inflicting damage on each other. 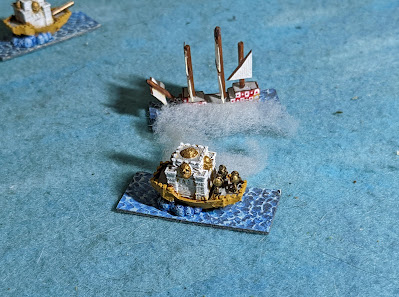 The advantage teh Ivory Towers had was that they could choose not to move regardless of their attitude to the wind, whilst the galleons were generally in constant motion.

The Ivory Towers managed to double up on a galleon. 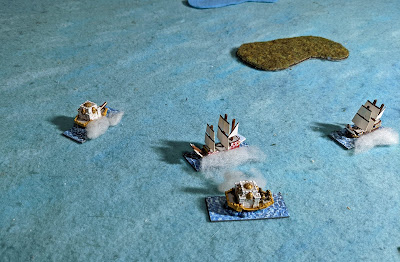 Unfortunately amongst the various damage being dished out, teh lead Ivory Tower caught fire ... 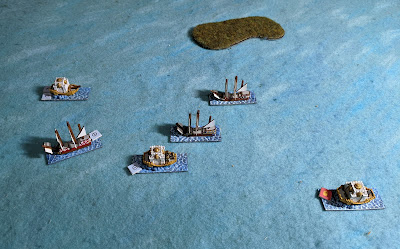 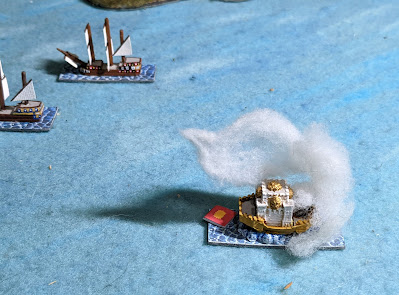 However the vagaries of the G&G command system saw the lead galleon struggle to stay in the fight as the wind kept shifting back and forth, and it eventually left the play area. 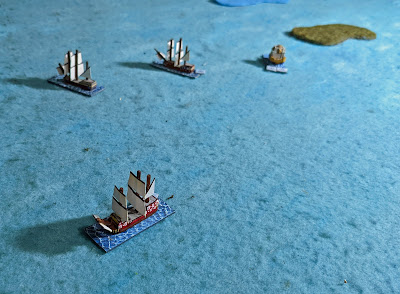 An Ivory Tower and a galleon battered each other at medium range. The galleon had turned up into the wind, so both ships were effectively stationary. 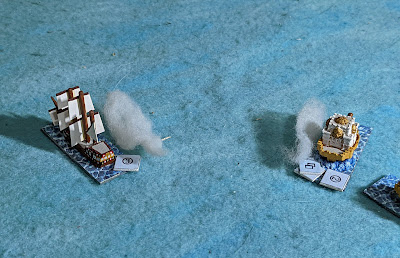 The Ivory Tower took a seious critical, leaving it heavily damaged, and it quickly sank. 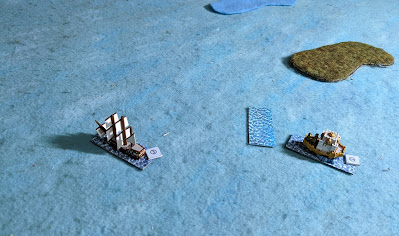 This left one Ivory Tower facing two galleons. All vessels were damaged to some degree. 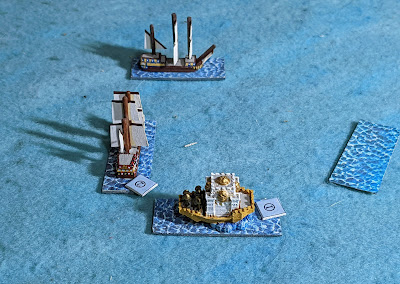 Two of them ended up even more damaged, when a galleon collided with the Ivory Tower. 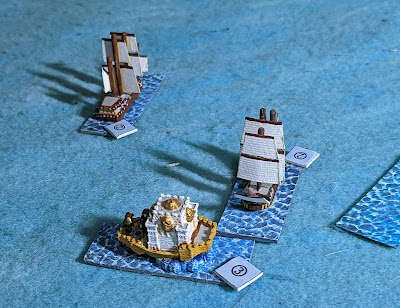 The ships separated and the crews of all vessels worked frantically to bring them back into action whilst undertaking what repairs they could. It didn't help that in the confusion one of the galleons fired on another, and took down one of its masts. 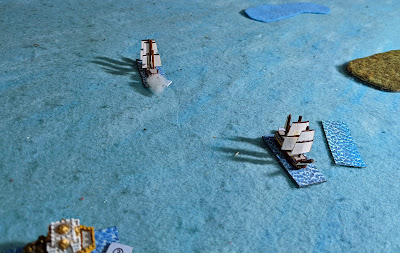 The offending galleon was in all kinds of trouble, with it's crew really not sure what it was doing any more. It too sailed out of the battle. 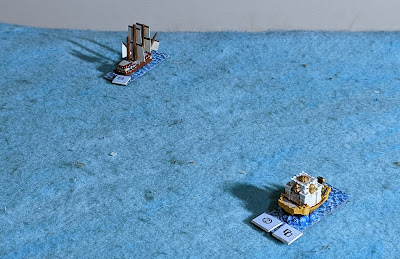 This left just one galleon facing one Ivory Tower, and both of them were badly damaged, including in their propulsion. They slowly circled each other, firing as they did so. 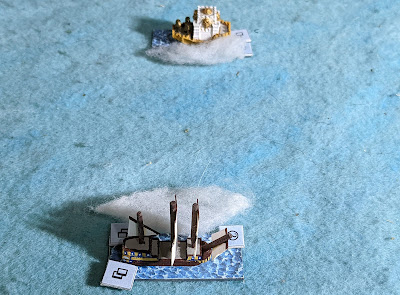 Eventually the Ivory Tower managed to edge onto teh stern of the galleon and raked it. 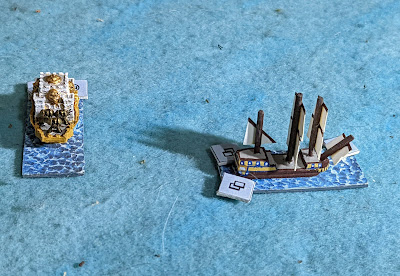 A second rake saw the galleon pounded into a sinking wreck. 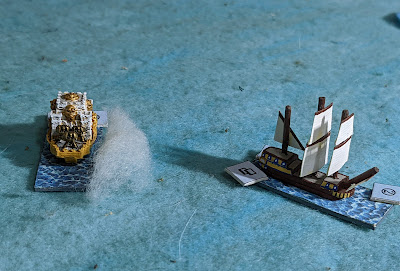 So the Ivory Towers kind of won this encounter, although it was a pretty close affair. And, to be fair, two of the galleons simply sailed off the battlefield rather than strike or sink. However the Ivory Towers were unlucky to receive so many horrible criticals.
I didn't find the Ivory Towers overly disadvantaged against the galleons, but it will be interesting to see how the fare against an equal force of galleys, since the latter have a radically different style of fighting, having frontal gunnery and being much better at boarding.
Posted by Kaptain Kobold at 13:06