'Fayre Winds & Foul Tides' is the supplement for 'Galleys & Galleons', and includes all kinds of fun stuff for expanding the game. Some of it is more fantasy or 'lace-pulp' orientated, but much of it can be applied to regular games. One of the sections covers special terrain pieces - volcanoes, areas of weed, maelstroms and ... icebergs. I'd not tried the iceberg rules before, so last night I set up a game to use them.

I have a selection of ice terrain pieces which I made for some of my HOTT armies many years ago, so dug them out.  The smaller pieces were the randomly-placed icebergs, whilst the larger piece was simply an island. 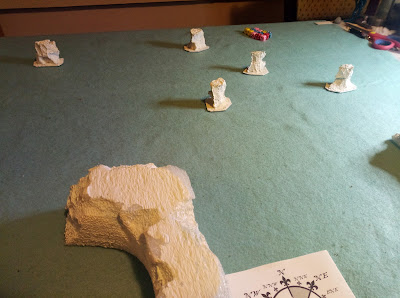 And here are four French vessels, small, sturdy and laden with furs and whale-oil, negotiating a passage through the ice. 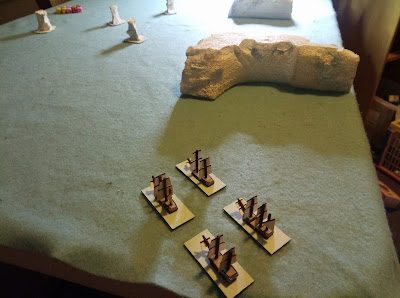 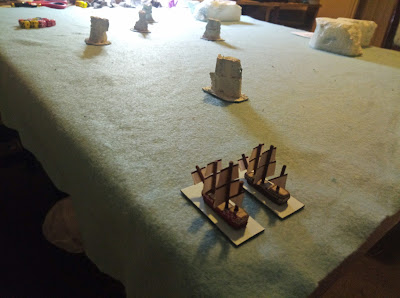 The icebergs are treated as islands, so as well as their footprint being dangerous, they have an area of risky shallows around them as well. Each time any ship rolls a turnover, ending that player's turn, the icebergs drift with the current in a pre-determined direction. This may not be the same as the wind direction. Obviously I randomised which direction the ice would drift after the ships were set up; it was across the direction the French ships would have to travel in order to escape*.

The icebergs were randomly positioned, but ended up close together, so the French found themselves having to steer four ships through a close-packed erratically moving wall of ice. 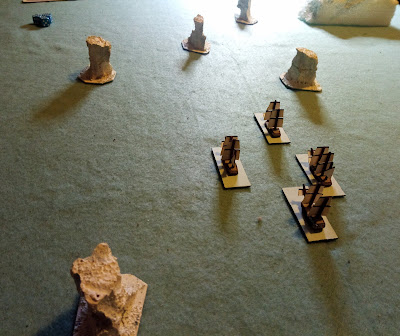 The English galleons moved up. Their plan was to steer into the rear of the French convoy, acting as a hammer to the ice's anvil. Unfortunately what happened was that they rolled really badly for activations, which not only left them unable to close on the convoy ... 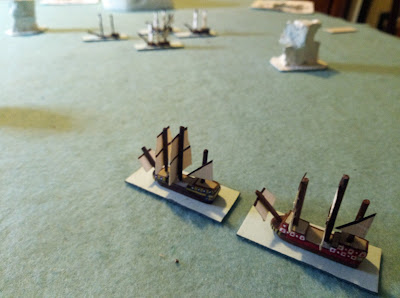 .., but also caused the ice to move very rapidly as the French attempted a passage through it. 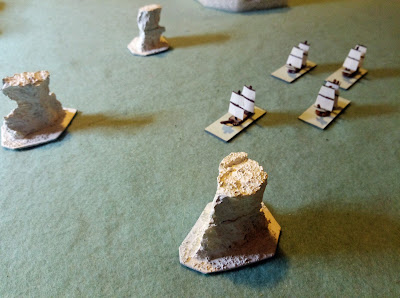 Passing close to a 'berg on the side it's moving towards is a bad move; the lead French ship was crushed by the ice and destroyed. 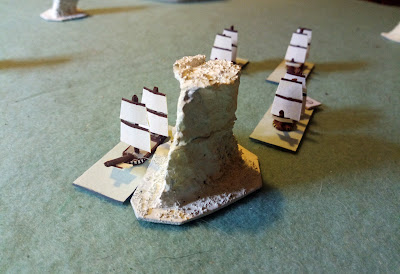 However the other ships passed to the lee of the iceberg, and the field was clearing thanks to more terrible activations by the English. 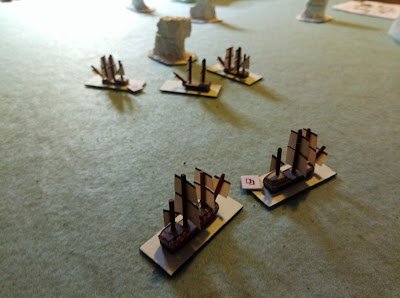 Only one iceberg lay between the French and safety, although a shift in the wind had left them sailing close-hauled. 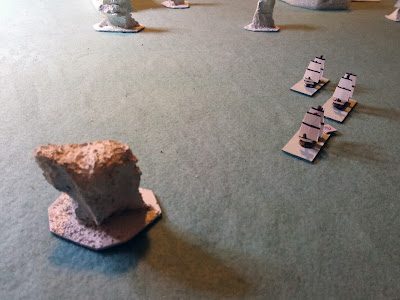 The English finally got their act together, although a cheeky shot by  French stern-chaser had damaged the rigging of one of them. The crew were forced to balance trying to close with, and engage, the French ships with repairing the damage. So far the only damage the French had suffered were some minor scrapes on one ship due to sailing close to an iceberg. 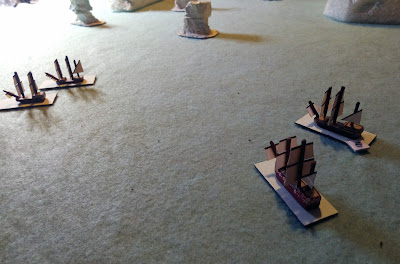 One French ship escaped by the time the English, closing up with their Razee ability, got into a decent engagement range. They fired on the already damaged French vessel, and scored some hits, but a hole below the waterline saw it sink. The final French ship escaped. 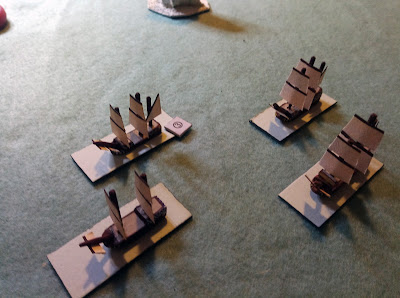 So the French lost one ship to the ice, owing to a silly plan, and another to enemy action, with two ships escaping intact. The English really didn't put in much effort.

The icebergs were fun and unpredictable, although maybe I used too many. A couple of larger ones - the size of the islands I use, could be interesting. Actually the Treasure Island scenario, where ships have to visit islands looking for loot, could be fun when the islands themselves are moving; you'd have to choose your anchorage very carefully indeed.


*If an iceberg drifted off-table it would reappear on the opposite side at a semi-random point.
Posted by Kaptain Kobold at 10:18