Peter put on another learning game of L'Art de la Guerre yesterday evening. This time we used simpler armies - mostly foot with fewer troop-types and special rules. The army of Pyrrhus faced one of the flavours of Romans. Bryan and I handled the Romans, whilst Caesar and Peter took the Greeks. 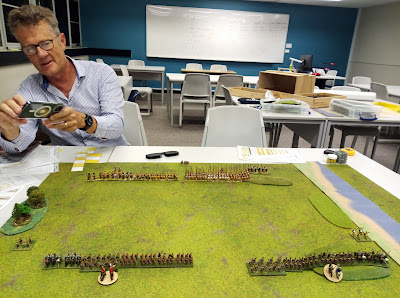 The Romans had two identical commands that looked like this. 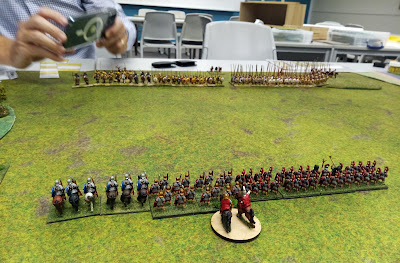 The Greeks had a command of mostly hoplites, supported by some top-quality cavalry, and another of pikemen, including some elites. Elites seem pretty deadly in L'Art de la Guerre. 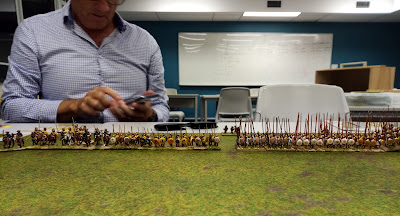 Early approaches. The Romans advanced cautiously, whilst the Caesar sent some pikes to support Peter's troop, concentrating their effort on my command. 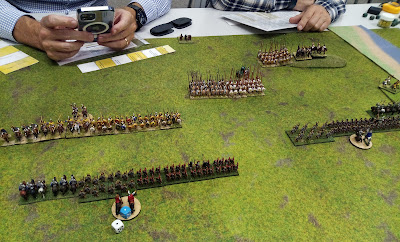 I stood ready to take the attack, hoping that Bryan would be able to use his troops to eliminate Caesar's remaining forces and turn the Greek flank. As a plan it had some merit, aside from the fact that it was bollocks. And away with go with the combats. Like DBA, L'Art de la Guerre uses opposed die rolls, but there are no factors (just situational modifiers) and the combat results are based on the margin of victory, not multiples. In addition combat is attritional; units take between 2 and 4 hits and are then eliminated. 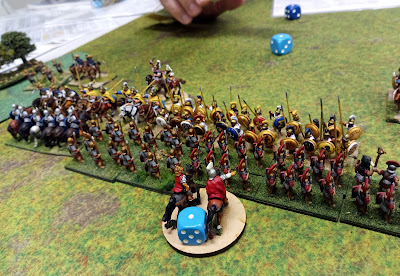 Caesars pikes got stuck in to my legions. 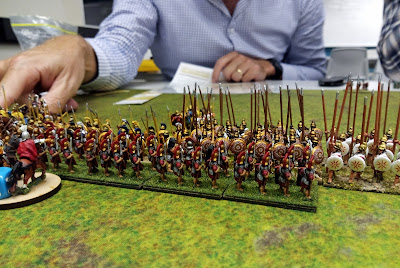 The battle from the air. On the left my command was getting a right pasting, ridden down by the elite Greek companions and rolled over by elite pikes. Bryan was engaging Caesar's other pikes in the centre in a standard infantry slog, but was winning on the far right of the picture against the lesser Greek cavalry. 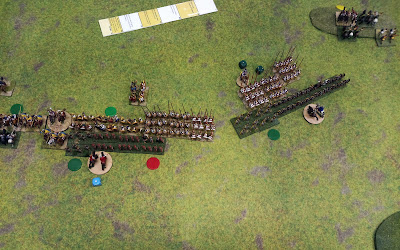 The pitiful remains of my command. I barely troubled the enemy troops; I just sat there rolling one and twos for combat. 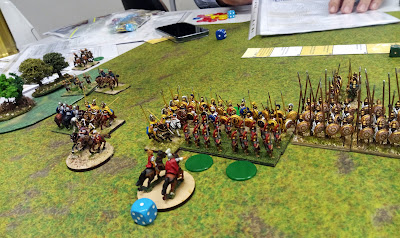 Bryan was faring a little better on his side of the table, but the Greeks weren't exactly dying in the droves. 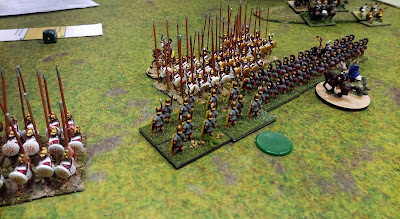 Anyway, even when I got an advantage - flanking some of the Greek elite cavalry - I messed it up and got defeated. 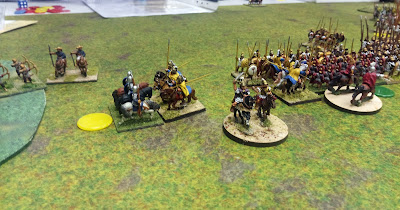 So the Romans collapsed and the Greeks didn't, and that was that.
It was a fun, if frustrating game. I'm not sure how much of a fan of ADLG I am, but then I've only played two games. It's certainly the game du jour for ancients around here, but whilst it has more chrome than DBA, it doesn't seem to add that much. Maybe with some more games I'll get a better appreciation of what it has to offer.
Posted by Kaptain Kobold at 10:51