Bolt Action On The Volga

The Bolt Action fans in our group are trying out various Stalingrad scenarios at the moment. On Thursday I played in one of them.

The premise is that a group of Soviets are defending a section of the table, and twice their number of Germans are attacking. Meanwhile a blocking force of Germans is attempting to hold off twice their numbers of a Soviet force trying to break through to the defenders.

I played one of the German attacking forces.

We took a fair time to set up and get organised, and it was clear that we wouldn't finish the game before the end of the evening. But we plugged away as best we could.

Here's the view down the table, with the German attackers deployed on the right. The Soviets have yet to deploy. 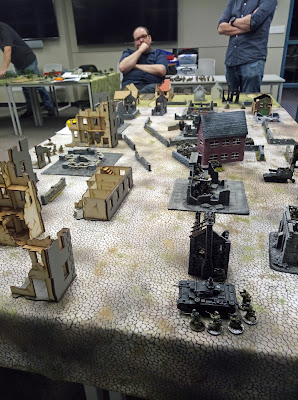 A better view of the layout. The bottom left of the picture was the objective area; both Germans and Russians got points for having units in this area at the end of the game. 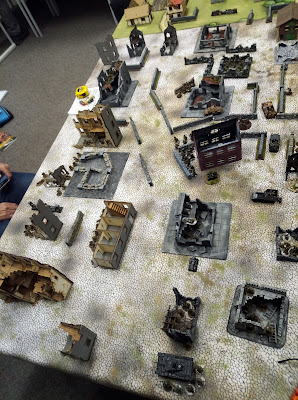 A view from behind the Germans towards the objective. 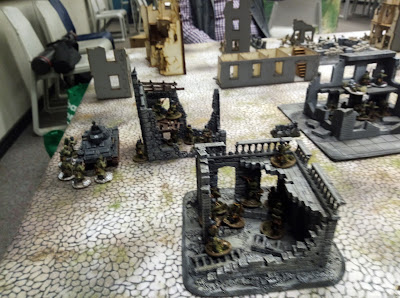 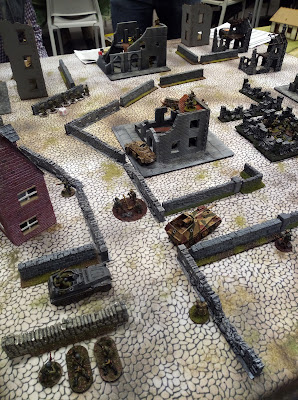 Opening moves saw the Germans advancing cautiously. Our mortars, artillery and snipers did a good job pinning down some of teh Soviet defenders, but we quickly took casualties from those not cowed by high explosives. 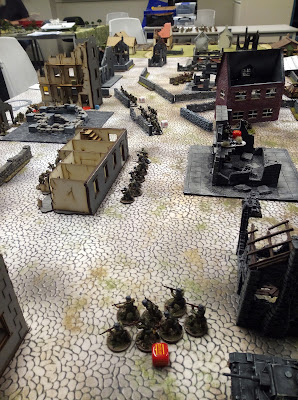 The relief force arrived, centered around a T34 and a KV2 disguised as a KV1 (someone brought the wrong turret). 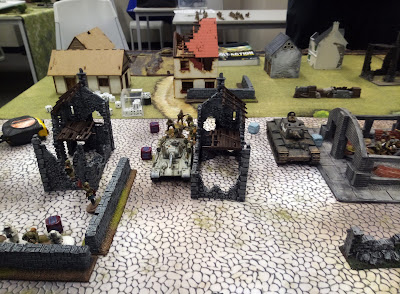 The objective area. The orange markers are pins, showing that a lot of fighting was going on. After this photo was taken it boiled down to close assaults, which did not go well for the Germans. 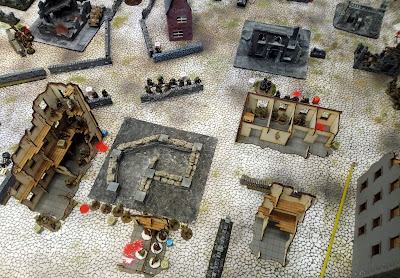 The breakthrough force advanced. They too launched close assaults, and a unit of factory-worker conscripts actually swept away one of the German infantry squads. 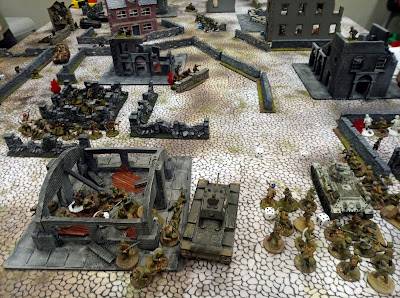 At my end of the table I had a PzIII engaged in a duel with an SU76. At the end of the evening we were only a few turns in and the Germans had lost a significant chunk of their infantry. The Russian breakthrough force was set to do what it's name suggested with little difficulty, and we called the game.
We agreed that it's an interesting scenario setup, but that we need to rethink the terrain to provide more covered approaches for each side and force the action into a series of localised fights with limited visibility. Also with six commands on the table it plays slowly, but we have some ways of speeding that up. We hope.