Another Return To ... The Arena Of Death

Our Gaslands game a couple of weeks ago proved popular enough that we had two new players wanting to give it a go. So last night Caesar and i set up a game for them. We created some teams for them to select from, and did one each for ourselves and rolled for a scenario.

Arena of Death it was, then.

To be fair, along with a race this is a good starting scenario, since it just focuses on destroying things and (unlike a race) doesn't even have respawns.

We played with the full rules, but tried out the new optional Wipeout and Evade rules that the author has on his blog. Both are designed to keep vehicles in the game for longer, which may seem counter-intuitive in a game that has a Rule of Carnage, but are designed to keep players more involved, which is good. In addition we switched to a popular house-rule that the spin at the end of a Wipeout is randomised rather than the (always malicious) choice of another player.

Caesar, running two Mishkin cars. Both had mini-guns and a mobile mechanic, and one had sat-nav.

I ran Rutherford, using a single heavy truck (Siberian Khatru) armed with a tank gun in a turret.

Ed ran an Idris team, both equipped to go fast at all times and steer skillfully. One was armed with crew-weapons and the other with rockets.

Bailey also ran Rutherford; the car Fountain of Lamneth had rockets and Jockey Full of Bourbon was a pickup armed with side-mounted flamethrowers.

This was our arena. Of Death. Or not, since we only generated three gun turrets. The carnage would have to be player-created. 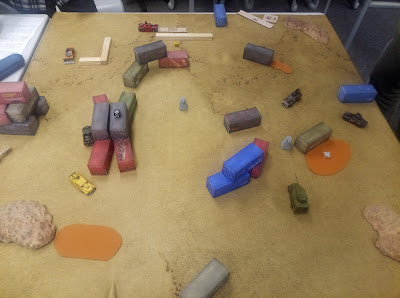 Siberian Khatru started with a gun turret right in front of it, blocking my best route into the main part of the arena. 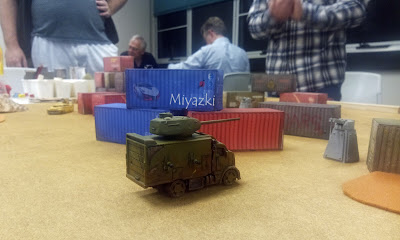 I didn't want to waste my limited tank-gun ammunition taking it out, nor did I want to collide with it, so I deftly (really) turned the truck broadside on and used my hull machine-guns to eliminate the annoyance. This took me through some hazard-inducing soft sand.
In the distance you can see Ed's vehicles, running away. He was not keen to face the truck. 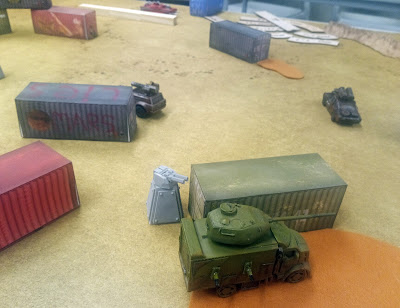 Bailey had sent hid car my way, but Jockey Full of Bourbon went head-to-head with Caesar's ram car, setting it on fire. 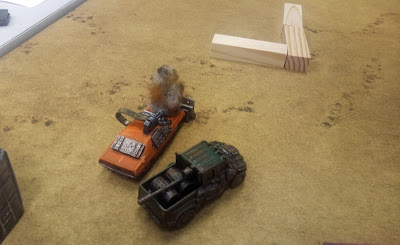 I got into the main arena, and put a shell into one of Ed's cars, badly damaging it and causing him to wipeout into the kill-zone of a gun turret as well. 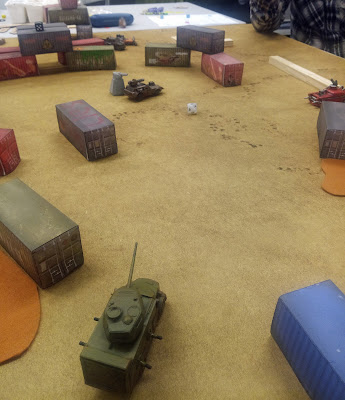 A view of the early action. 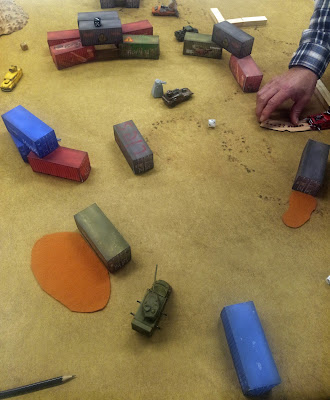 Caesar put the fire out on his car (stacked up shifts from the other car's satnav meant that he could effectively manage hazards on both of his vehicles), and rammed Jockey Full of Bourbon. 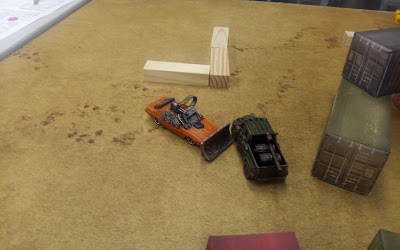 Bailey got The Fountain of Lamneth into action, pumping a volley of rockets into Siberian Khatru. 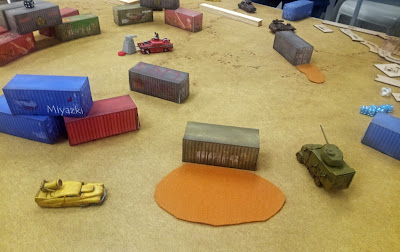 There's some footage missing here. Jockey Full of Bourbon finished off Caesar's ram car, and encountered Ed's rocket car. Bailey set Ed's car on fire, but received some rockets in return and was damaged. Siberian Khatru was in range and finished off the truck. Sadly the fuel-laded pickup didn't explode. 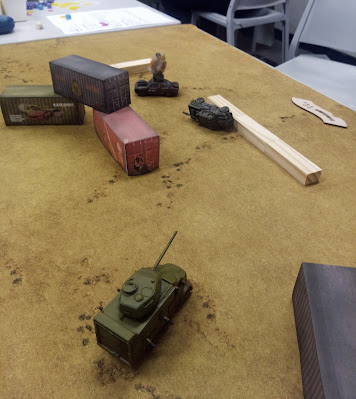 Bailey made an error of judgment with some templates, and drove The Fountain of Lamneth off the board into disqualification.

(We allowed the new players one turn where they could try out templates before committing, to get them used to how they looked on the table. Then we implemented the Touch It, Use It rule). 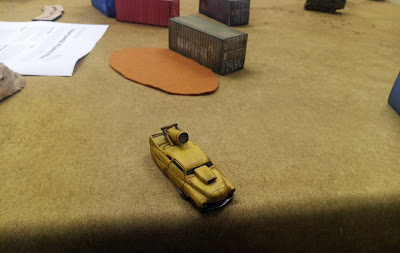 I think at some stage I finished off one of Ed's cars with my machine-guns. He had so few hits left that it wasn't worth using the tank-gun on him, something he found terribly insulting.

So we were into the end-game. Ed's rocket-car was on fire and in the middle of the arena. I was down to my last shell for the gun, and somehow not picking up Audience Votes to reload it. And Caesar was driving around the periphery with his mobile mechanic making frantic repairs. 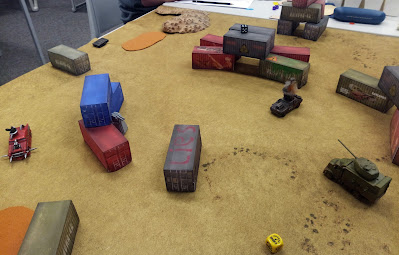 I moved up to Ed, shot at him (with the machine-guns again, I think) and got rammed in return (to be fair I was close enough that he had no choice). Ed's car was destroyed, and exploded.

(I think we forgot that when he collided with me he should have set me on fire, but in fact I think I wiped out off the collision, which would have dropped me to the zero hazards needed to put out the fire anyway.) 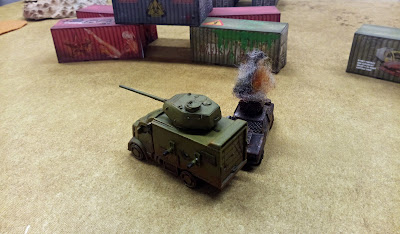 Caesar's red Freeway Fighter came back into the fight, looking fairly healthy. But to take me out and win the fight, he had to bring his front-mounted mini-gun to bear. 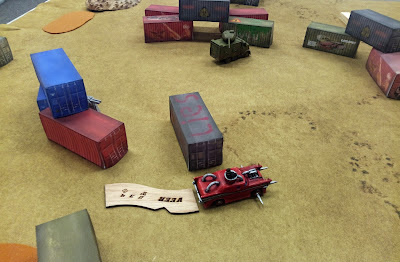 We duelled for a couple of turns, but my ponderous truck kept wiping out as I turned tightly and got off a last shot with the tank-gun. This meant that I picked up Audience Votes, thanks to my crowd-pleaser trait, which rewards you for wiping out. I was able to use them to load up one last shell that we found down the back of the sofa, and finish off Caesar's car, for an unexpected win. 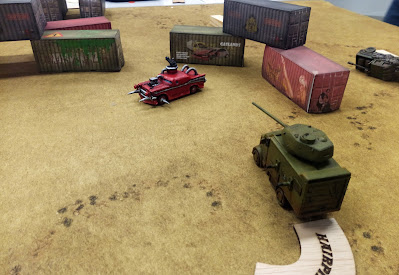 The new optional rules worked nicely. The evade rules did reduce the damage inflicted a little, so it took more than a single decent hit to finish off a player's vehicle They reward driving at a reasonable speed as well, which keeps things suitably hair-raising.

The Wipeout rules made a real difference; the change is that vehicles in Gear 3 or lower can choose to maintain that speed even after the wipeout, which keeps them active in the game-sequence if they wipeout in an early gear-phase. Faster vehicles must reduce to Gear 3 or less. The randomised spin was quicker to adjudicate as well.

My truck did well out of the new wipeout rules. My maximum Gear is only 3, so even if I wiped out at top speed, I didn't have to slow down. A damaging flip was unlikely at my low speed as well. It's true that I would spin to face a random direction, but the arena was open enough that I could always turn out of trouble. And with a turret-mounted weapon it didn't matter how I faced; I could bring my gun to bear on anything within range.

Here's the design for Siberian Khatru:

I assumed I'd wipeout a lot, so teh Crowd-Pleaser trait meant that I got a reward for doing it. Road Warrior meant that I could take off a hazard if I damaged something, so helped minimise the hazards caused by firing the tank-gun.

We all had a good time, and I think everyone's keen for another game. Maybe not an Arena of Death this time though.
Posted by Kaptain Kobold at 15:55