A change of plans at wargaming on Thursday meant that the planned Bolt Action game had to be cancelled at the last minute. So Caesar, John and I decided to do Gaslands instead. This entailed me spending my lunchbreak scrabbling around the house trying to find rules, dice, templates, terrain and vehicles, plus putting together a team, but it was all worth it.

We did 50 can teams and rolled the scenario when we got there (and after I set up the terrain). We ended up with, as you may have guessed from the title, Arena of Death. In this one the vehicles fight until only one team is left running, and there's no respawns. In addition there are gun-turrets scattered around which shoot at everyone.

It's a scenario which favours combat-orientated teams.. None of us selected one.

Caesar went for two Idris buggies, built for speed. I mean they were both armed with rockets, but mostly with nitro. John and I both chose to go with the vehicular ballet of Maxxine; John had three fairly vanilla cars (Maxxine scores audience votes for doing spins and slides close to friendly vehicles, so more vehicles are good), whilst I went for two cars, choosing to load them with perks.

Here we are, ready to roll. John's vehicles are top-left, mine are at the bottom and Caesar's towards the top-right. 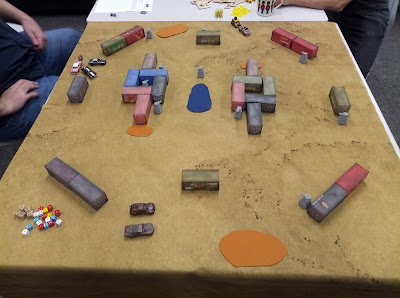 Here's my team - Mr Apollo on the left and Bad Blood on the right. I started things off with some crowd-pleasing ballet, performing tight turns and spins to the delight of the audience. 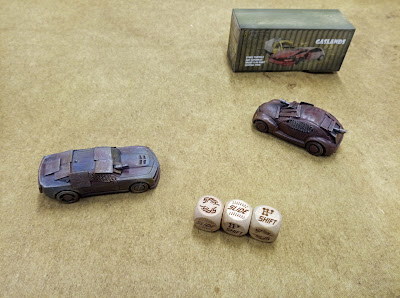 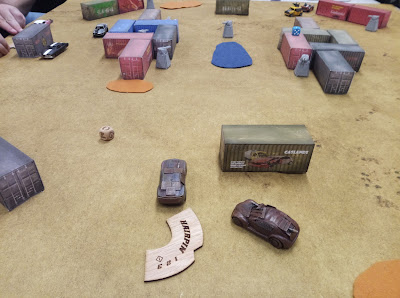 Caesar's vehicles roared up and down, also delighting the crowd. He spent his time away from the other vehicles wisely as well, using rockets to take out any gun turrets in his part of the board. 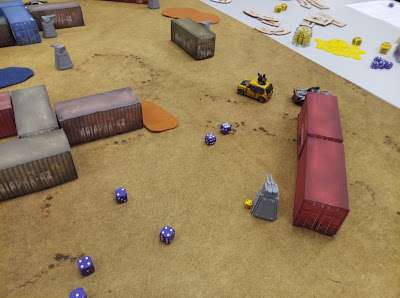 John's vehicles advanced menacingly around the perimeter. He couldn't roll spins and slides to save his life, so did little to excite the audience. 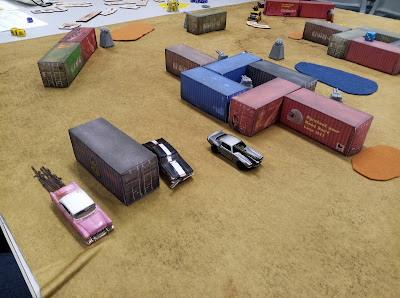 First blood was Bad Blood, rammed by a car with a chainsaw on the front and badly damaged. John's team celebrated with some ballet. 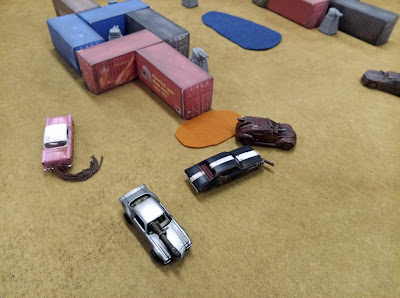 Then finished off Bad Blood. 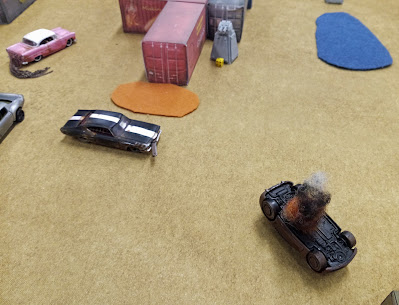 Mr Apollo was next, although I managed to avoid teh chainsaw there, and the two cars danced around each other, with the crews blazing away with handguns. 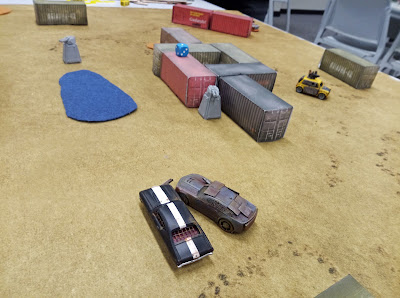 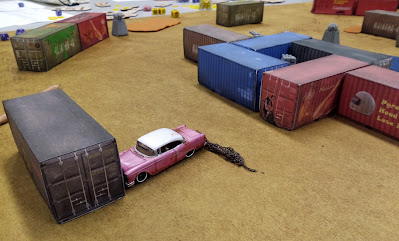 I took the opportunity to use Mr Apollo's minigun to shoot up Pink Bats. 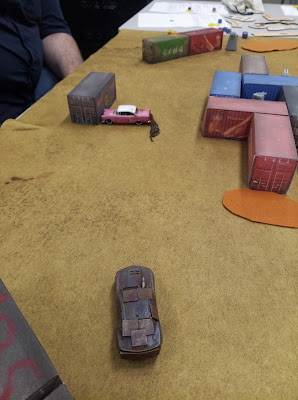 An overview. Caesar was still roaring around on the left, staying out of what was now a fierce fight between the two Maxxine teams. And in the middle John's chainsaw car had decided to drive through the water feature ... 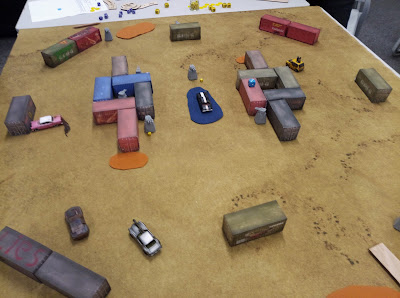 Both turret and car were eliminated. 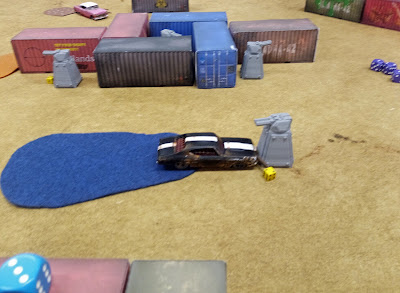 Mr Apollo was eliminated soon after, forced into a collision with John's silver car (sorry John. I can't remember most of their names). I dealt out a fair bit of damage back to it, though. 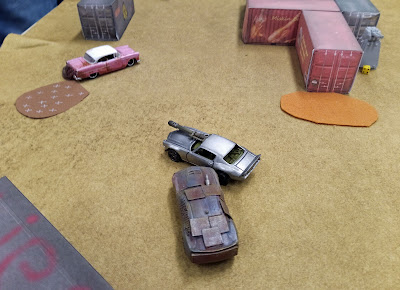 At that point we called the game for Caesar, whose vehicles were undamaged, and full of ammo. I had been eliminated and John's vehicles were badly shot up. A win for John was possible, but unlikely. 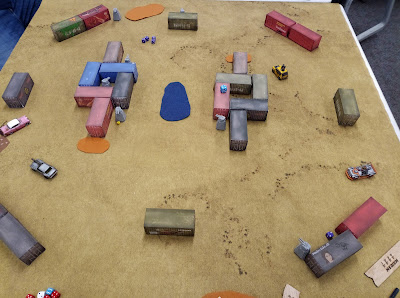 We had to spend a fair bit of time looking things up again; it's been over a year since any of us played, and even that was just one game. It's been a couple of years or more since any of us played regularly. Even so, we actually rattled through what we did fairly quickly, although none of us was running anything too complicated and time-consuming.

I'm keen to play again, and am keen to try out some new optional rules for evading damage and wipeouts that the author has put out on the 'net. One thing we tried in this game was to randomise the direction a vehicle faced when it wiped out, instead of another player choosing. The later is kind of fun, but can add a little bit of time as some players carefully reposition an opponent's car for maximum inconvenience. a simple directional die roll really speeded this up, and I don't think the game lost anything by it.

My first Gaslands of 2022 gets me another 52 Games entry.