Having now read Bob Cordery's 'The Portable Wargame' and 'Developing The Portable Wargame', I decided to give the rules a try. Not that I haven't played such games before. However I've been quick to rewrite and add things from the word go, and I thought that it would be interesting to try the game 'out of the box'.

I decided to try the WWII (or 'Mid 20th Century') rules, using a couple of Epic 40K armies. I skipped commanders, because I don't have any suitable individual figures, but otherwise just ran the units as in the rules. This meant that infantry shooting can't destroy tanks, for example, which doesn't entirely fit the Epic 40K ethos, but there you go.

I pitted a force of Space Marines against some renegade Imperial Guard. All troops were average, which meant that the guard infantry and the Marines were, in fact, functionally identical, but since the Marine bases have five figures each and the Guard have ten, I thought this balanced out nicely.

Here's the armies and battlefield set up. 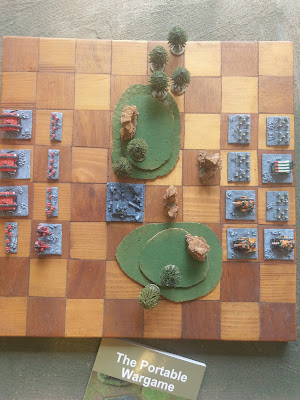 Yes, the terrain is based on the Battle of Hook's Farm. This may be a classic 'scenario', but it's not one I've played before. The rocks acted as buildings, providing cover for everything, the trees were woods (again, cover for everything) and there was one patch of rubble, which slowed all movement, but only gave cover to infantry.

Both sides had four bases of infantry and three tanks. The Marines had a base of landspeeders (classed as cavalry), whilst the Guard had a base of medium artillery.

There was plenty of cover in the middle of the battlefield, and that's where the infantry ended up. 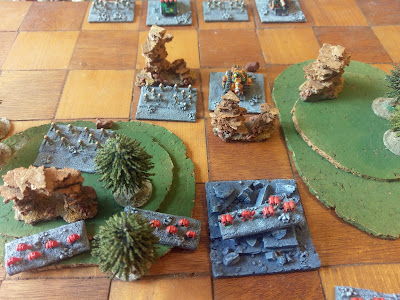 I say I used the rules straight out of the book. I didn't. I made two changes. 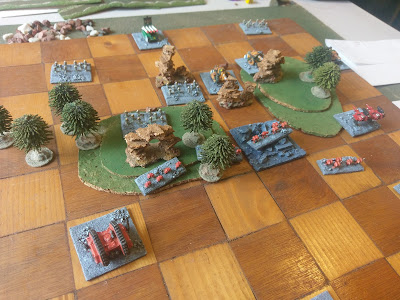 Firstly I modified the factors so that tanks in buildings or in woods didn't get a cover bonus if attacked by infantry. So they can hide from shooting, but not an infiltration-style close assault. 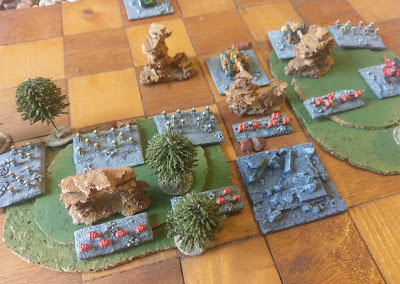 Secondly I changed the initiative system. Instead of one side activating all of its units, and then the other, I used an opposed die roll. Both sides rolled a D6, and the highest roller got to activate a single unit. They then rolled again, with the highest roller activating something else. This continues until all units are activated, or the turn ends. And end it could. If a double was rolled then the turn would end if the number on the dice was equal to or less than the number of doubles rolled during the turn. So a double '1' would always end the turn. A double '2' would end it if it was at least the second double rolled, a double '3' if it were at least the third and so on. If the double didn't end the turn, then the side that didn't act on the previous roll got an activation.

This is a lot simpler to play than explain, and meant that whilst most turns saw most units activated, on a few turns not everything got to at. 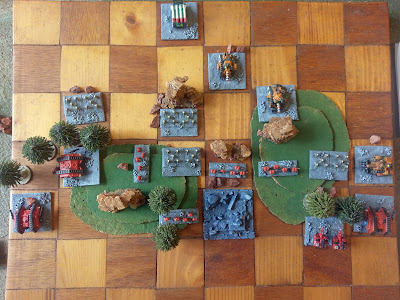 The fighting was intense, and there were lots of close combats because of the restricted nature of the terrain. One thing I wasn't sure about was whether a unit which has an enemy adjacent to it has to actually engage in close combat. There were a few points where I felt that an activated unit was better off sitting tight than risking a combat roll against something facing it. I may just house-rule this and say that close-combat is optional, and see how it plays out.

I was using strength points, and the game played out over several turns, with units slowly accumulating hits. Eventually the Marines reached their exhaustion point, but the Guard reached theirs the turn after before they could exploit their advantage, and the game ended in a stalemate. Only one unit was actually lost; a unit of Marine infantry. 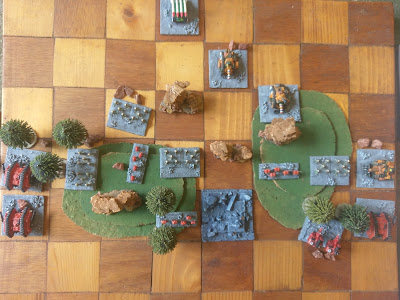 I set up the game again, but this time I used the Sudden Death option. This gave a much more satisfying battle, with each move and attack being riskier, since an exposed unit could easily be picked off by a single shot. 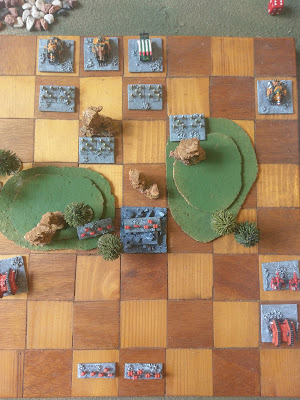 Tanks duelled on the one flank, whilst once again the infantry ducked and hid in the centre. 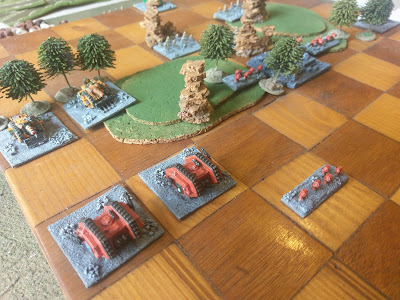 The Guard tanks broke through, and turned the Marines' flank, forcing them to their exhaustion point. 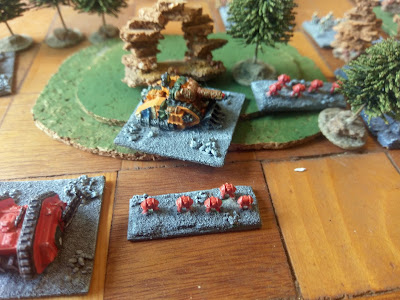 A follow-up attack by the Guard saw more Marines fall, but the Guard then lost their attacking unit, forcing them to their exhaustion point. However with only four losses to the Marines' five, I gave the battle to the Guard. 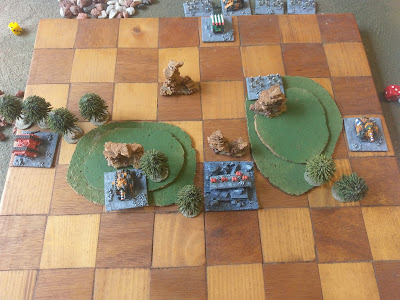 The initiative system seemed to work OK, although it does make coordinated attacks difficult to achieve. I shall try it some more and see how it pans out.

The Sudden Death option gave a more satisfying game but, of course,  at the cost of one of the features that helps delineate different unit types; their strength points. Thus an artillery unit (two strength points) is now as tough as an infantry unit (four strength points). I'm not sure what the answer is there. The strength points would work, I think, for anything 19th century and earlier, where warfare is more attritional, but Sudden Death does rather suit this style of 'modern' warfare. I shall have to ponder the possibilities; I rather like the idea of an Epic 40K Portable Wargame now I've tried these armies out. Next time, though, I might use less terrain, or spread it out some more so that there is more scope for shooting.
Posted by Kaptain Kobold at 21:52