I tried out another portable Epic 40K game this morning, just to get the ebb and flow of the mechanisms clear in my mind. I found that the initiative system I described in the previous post worked quite well once you got used to it, and that coordinated efforts were possible with a bit of planning, even if you had to gamble sometimes.

I diced for a random terrain setup, and ended up with this rather nice defensive position. So I decided to try unequal forces in an attack/defence scenario.

The Imperial Guard defended, with four poor infantry bases, two tanks and some medium artillery. They had defensive positions across the front of the two hills and the pass in-between. 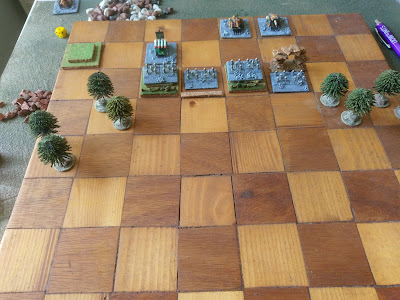 The Marines attacked. They had the same number of units, but the force was made up of three tanks and four elite infantry. 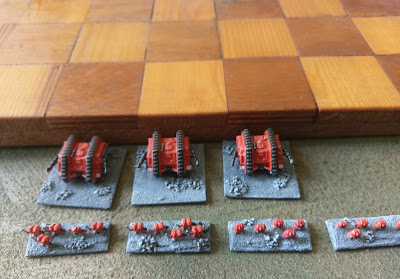 I gave the Marines twelve turns in which to take the hills. They got off to a bad start when the very first initiative roll was a double '1', which instantly ended the turn. 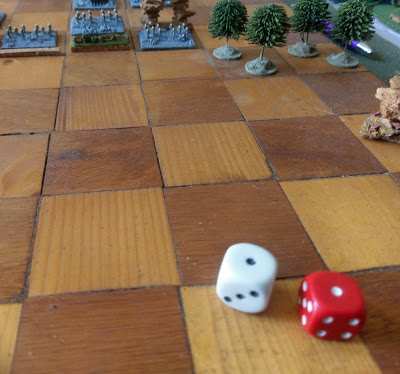 On the second turn they advanced their tanks into range of the hills, and took them under fire. The tanks would be able to sit outside of the range of the infantry's weapons and bombard, forcing the Guard to either risk a game of playing the odds (would they be wiped out before the time limit expired?) or to counter-attack. 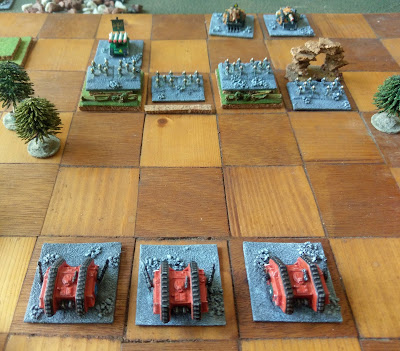 The Marine infantry followed the tanks, working onto the flanks. 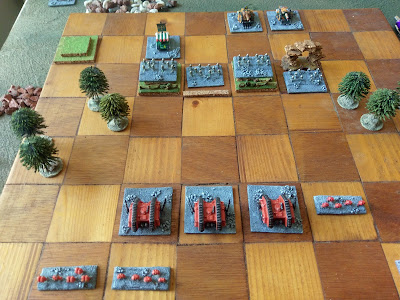 On turn three both sides scored a kill; a Marine tank destroyed the infantry in front of it, but a retaliatory strike by the Guard artillery destroyed the tank. With hindsight they should have shot at one of the tanks that hadn't acted yet that turn, but I wasn't thinking. 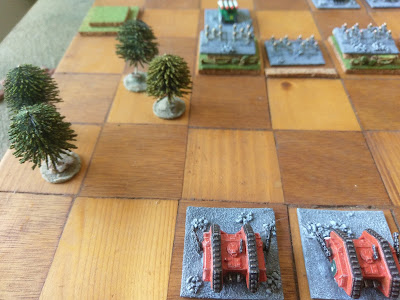 The Guard sent their tanks to attack the Marines advancing on their left, hoping the artillery would cover the other flank. 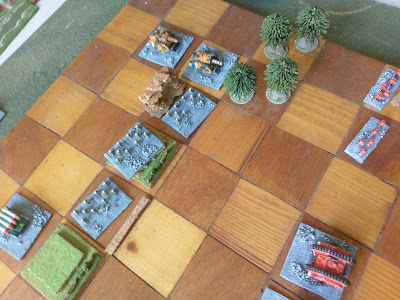 The tanks took up position in the woods and bombarded the Marines, who returned fire. Neither side inflicted any hits. With a slight edge, the Guard pushed forward one of their infantry units, hoping to withdraw it on the next turn before the Marines could respond. Its firing was also ineffective. 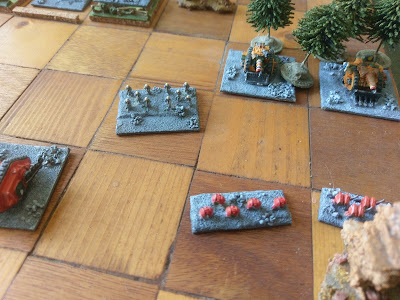 The Marines responded with one of their infantry units swinging across from the other flank into a close-assault, but this failed to inflict any hits either. 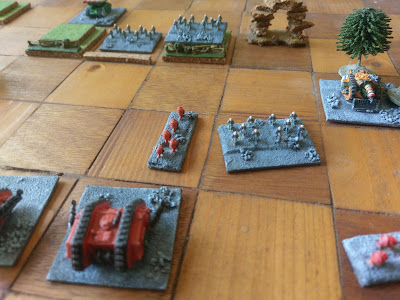 The Guard responded to the open Marine flank by launching an assault of their own, which was also ineffective. 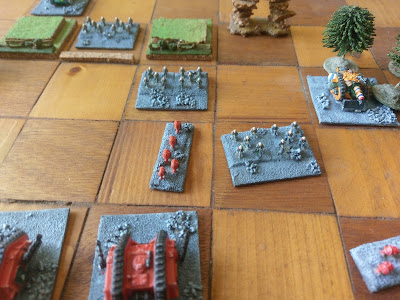 The Guard counter-attack had now left them exposed. Could the Marines exploit it? 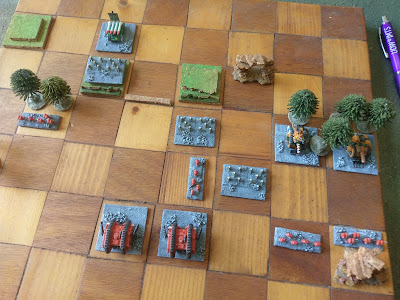 On the Marines' left, their fourth infantry unit attacked the flank of the Guard position, but again the close combat was inconclusive. The fire from the supporting artillery wasn't, though, and destroyed the Marine infantry. 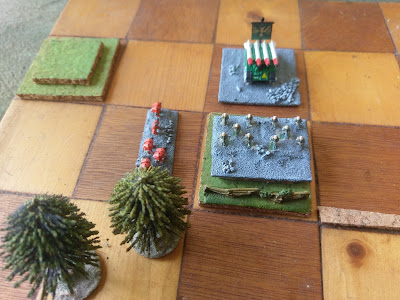 The Marines pushed a tank forward to assault the position, but it also failed to score a hit. 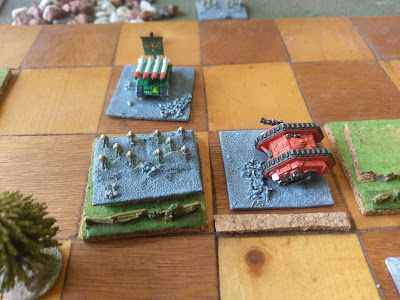 The exposed Guard infantry had been forgotten in the excitement of the action on the other flank, and they were shot down before they could withdraw. 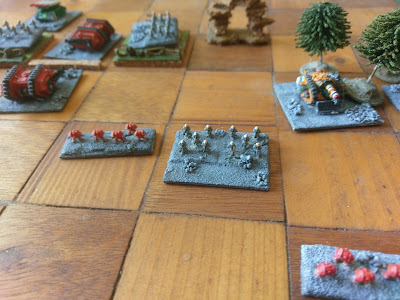 The Guard launched a local counter-attack on the Marine tanks, and destroyed one. This pushed the Marines over their exhaustion point. The attack had failed, and a withdrawal was now the only option. 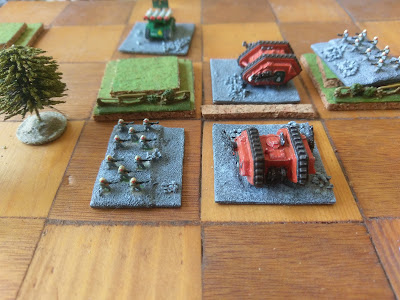 This was the position at the point the Marines stopped their attack. 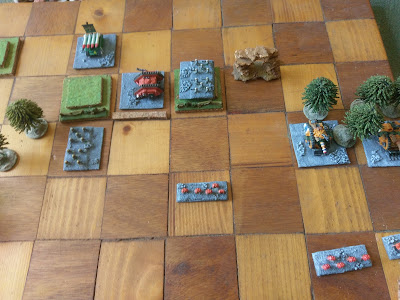 Their infantry pulled back to the baseline, but the Guard tanks advanced, firing as they came, destroying another unit. 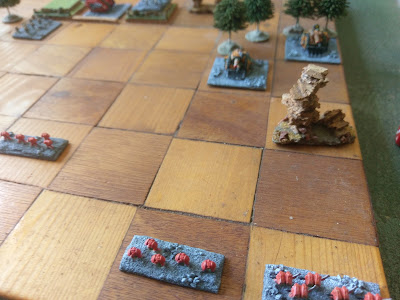 The last Marine tank was trapped in the pass. Guard infantry attacked it from both sides, but in an amazing set of rolls the tank not only survived, but destroyed both attacking units. This caused the Guard to reach their exhaustion point as well. 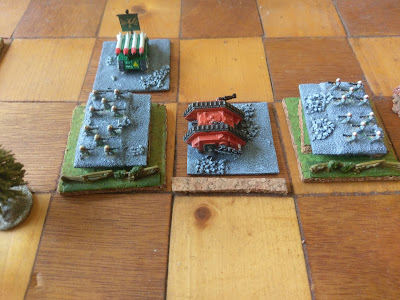 Their tanks stopped their pursuit, but continued firing, and another Marine infantry base was lost. 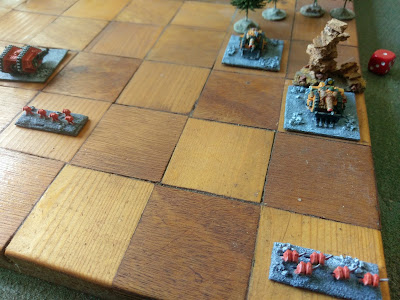 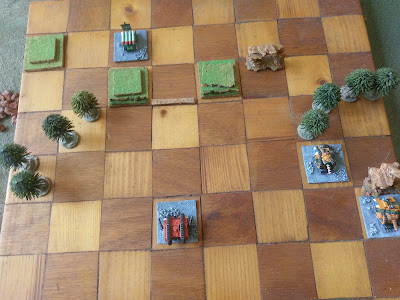 Rather than have infantry unable to affect tanks with their firing, I allowed them to hit, but they increased the roll by one when rolling for effect, making it more likely the tanks would retreat. However all combats ended up with units being destroyed; not a single unit retreated.

This adjustment gave me some thought as to how to factor unit strength points into the Sudden Death system.

The basic 'save' roll when a unit is hit is as follows:

Effectively an Elite unit gets +1 to the roll and a Poor unit gets -1.
My adjustment for infantry shooting at tanks gives a further +1 on what is effectively the unit's save roll.

What I would try is this. Units generally have a strength of 4, 3 or 2. A unit with a strength of 4 gets a +1 to their roll (so is harder to destroy and more likely to retreat). A unit with a strength of 2 gets a -1 (so is more easily destroyed). This makes infantry more resilient, and things like artillery weaker in combat. Further adjustments could be made to reflect heavy tank guns having better armour penetration, and so forth. There's maybe scope for all kinds of modifiers and chrome.

Retreats are easily blocked on a  square grid, leaving units very vulnerable. I'd be inclined to allow diagonal retreats if no other option is available.

All this is food for thought ready for the next game.