As we entered the second week of our two week camping holiday, we encountered Weather. I gave it a capital 'W' because it was pretty serious; torrential rain for two days, with warning of floods and general apocalyptic disaster. We decided to head for a commercial caravan park where, if necessary, we could rent a cabin for a couple of days or, as we actually did, we could pitch our tents but live in the cosy, dry and (above all) indoors kitchen areas they have. We basically spent an entire day living in a large kitchen area, but it was a great chance to break out some boardgames. Catherine and I played W1815 a few times, and the four of us played a few rounds of Love Letter. But left to my own devices one afternoon I had a go at Memoir '44, using the solitaire card allocation system I wrote up here last year.

I played a Gold Beach scenario first of all. 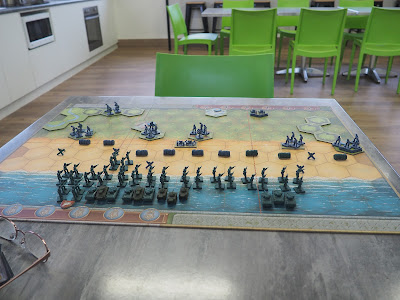 The Allies pushed ashore quickly, but the German defences are quite tough in this scenario; a mixture of bunkers and towns. 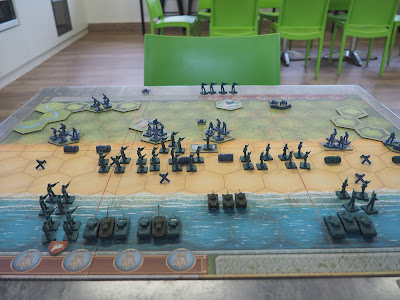 An early Armoured Assault card got the tanks up onto the beaches fairly swiftly so the infantry were properly supported. At the top of the picture you can see the Allied casualties mounting, but actual unit losses were low. Meanwhile at the bottom of the picture the Allies had captured two objectives. 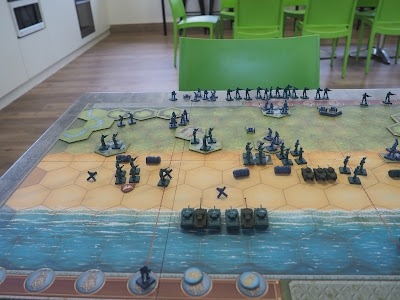 A final push by commandoes supported by tanks saw the third objective fall, giving the Allies a win. 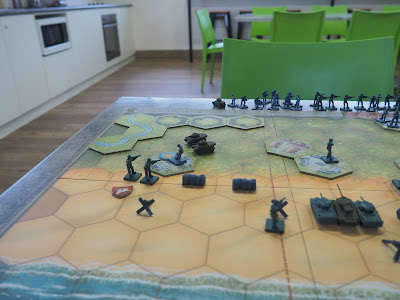 A view down the beach. 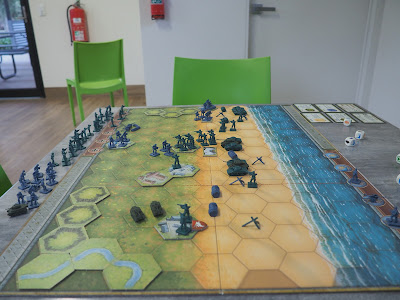 I then played the Mont Mouchet scenario from the basic rules which pits Tigers against French Resistance. It was a chance to use my 3D printed Tiger 1's from last year. The Resistance put up a bold fight, but both sides got a bad run of cards making clever plans rather difficult, and the advantage then lay with the more numerous and better equipped Germans, who picked up a decisive win. 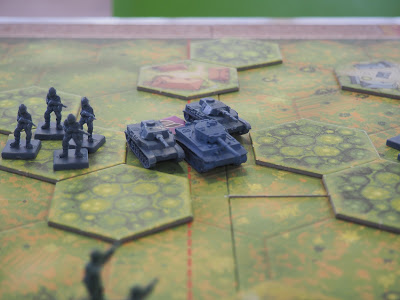 Finally I gave the Stalingrad scenario a go. A few months ago I picked up the Desert/Snow boards, but hadn't had a chance to try them out. This was a first outing for the snow.

The Stalingrad scenario is wonderfully huge, and takes a while to set up, but gives a great game. 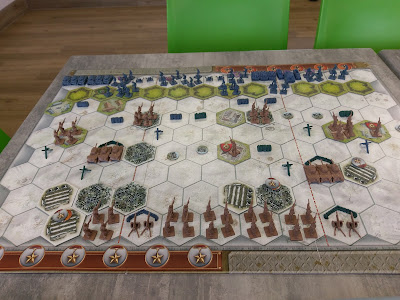 I used another 3D print for the German elite armour - an anachronistic Sturmtiger. 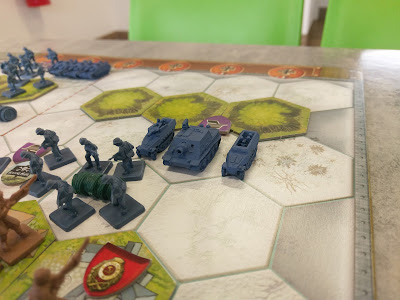 The Germans made a brave fight of it, but the advantage in this scenario lies with the Soviets, who can not only easily seize the three objectives (giving then 3 of the 10 medals needed to win) but are on the defensive, leaving the Germans to fight their way through formidable defences in order to inflict an casualties on their opponents. Left trading unit for unit the Germans were defeated fairly decisively. 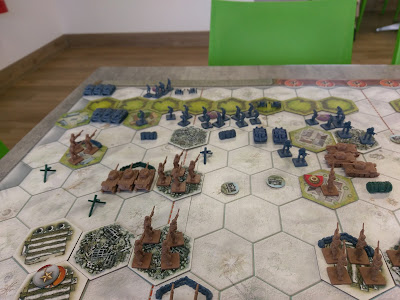 I also took Exploding Kittens, but we never managed to play that.

In a further post I will look at some of the things we saw which might be of interest to gamers, but that will have to wait until I've sorted out the photos. I did, however, mention our new trailer in my previous post, so here it is, towed ... 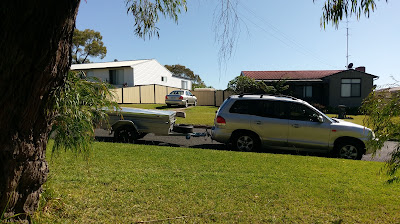 ... and deployed. It's basically just a storage box, but we can attach a platform to the side to use as a kitchen area, and the lid has an awning which gives us, and the contents, some shade and shelter from the elements. 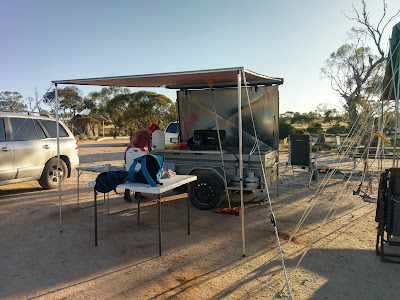