I tried another Epic 40K Portable Wargame this afternoon, once again pitting those renegade Imperial Guard against some heroic Space Marines. I decided to try out some thoughts on the damage effect roll I'd initiated in my previous post. I like the Sudden Death option for this style of game, as it makes the 40K world fast and deadly, as it should be. But I wanted to fine-tune it a little for different troop types.

When a unit is hit it rolls a D6 for the effect. If the score is equal to or less than its strength then the unit retreats 1 space. If it can't retreat then it is destroyed (but I allow diagonal retreats - if the unit can legally move into one of the spaces to its side, and then straight back it can do so). If the unit rolls greater than its strength, then it is simply destroyed.

This is basically the same as in the existing rules, with a simple +1/-1 factored in for the unit's strength. But it's easier to remember and resolve.

Both forces consisted of 36 strength points.

Exhaustion was 12SP for each side.

The Super-Heavy Tank had a starting strength of 4SP, a move of 2 and a range of 4. Working out rules for Big Things like this is on my to-do list.

I placed two ruins towards the centre of the board, then randomly placed more terrain. Both sides would enter from opposite sides, from any of the centre four squares on their edge. Victory went to whoever controlled the ruins after ten turns.

Here's the position at the end of the second turn. The Guard had got most of their forces on the board, and already taken out one of the Marines' tanks, but the lively duel was developing on the right-hand side. On the left of the picture the Marines had occupied a ruin. 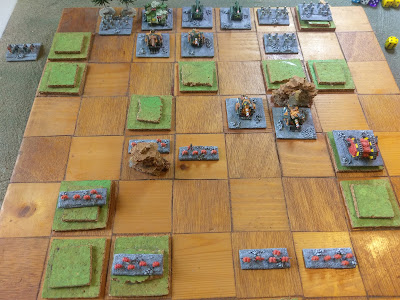 The Guard pushed their tanks forward in the centre. I scrapped the rules that infantry and cavalry couldn't harm tanks, but they did take a -1 when firing at them. I think this balances them up nicely for this genre, taking into account the fact that the infantry do tend to have access to some portable AT weapons. Infantry close-assault tanks at full strength. 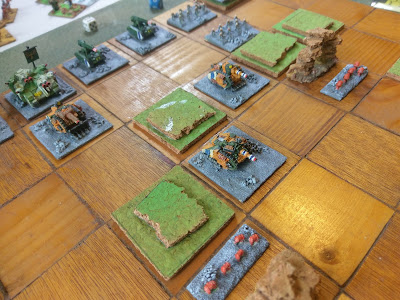 The Marines pushed forward aggressively in response. They could afford to do this because, if hit, they are only destroyed on a '6', retreating otherwise. Their push destroyed the Guard tank holding the ruins, so that by about Turn 4 the Marines held both objectives. 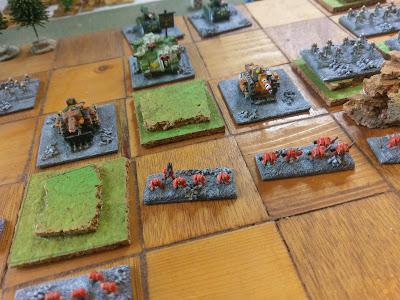 The Guard had numbers on their side, though, and were able to assault the Marines in the ruins relentlessly. Artillery drove them out, and waves of infantry destroyed them. This highlighted the downside of the Marines; each unit lost counts far more towards their exhaustion point than those of the Guard. With two tanks and some infantry lost, the Marines were close to breaking. 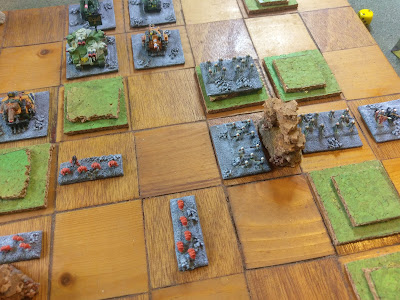 The position about halfway through the game. 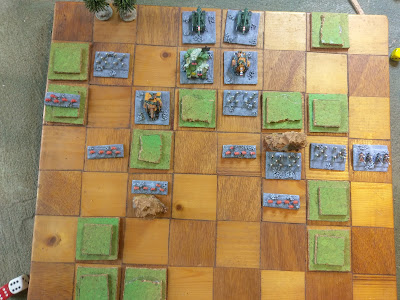 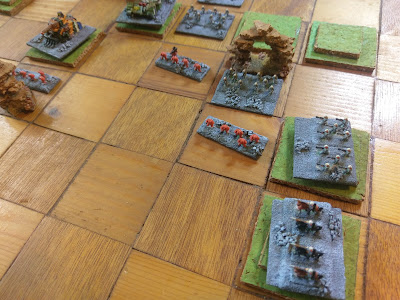 The super-heavy tank was now in action. The artillery shelled the other ruins, and the Marines in them died to a man. This broke their army, forcing them to break off offensive operations. 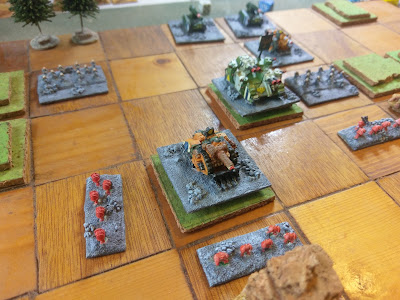 I played out the rest of the turn. The Guard occupied the second area of ruins, whilst the Marines made a steady withdrawal. 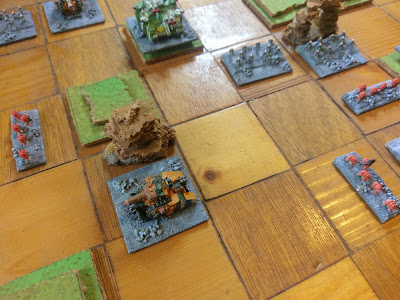 One unit found itself surrounded, but resisted all attacks. 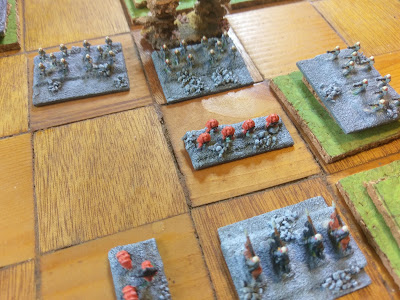 The position at the end of the game. It had lasted eight of the ten allotted turns. The Guard could afford to sit tight since the Marines couldn't push forward and take back either of the objectives. Guard losses were two tanks; their infantry seemed to be impossible to hit. 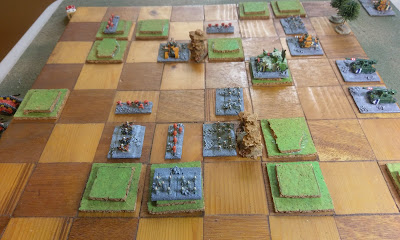 I was quite pleased with how the game played out, and feel content sticking to my dice-based initiative system, which forced some interesting decisions on both sides. I might try a couple more games with these somewhat conventional forces, before trying out something more exotic.