When I organised Galleys & Galleons for Thursday evening I wasn't sure how many players I would have to accommodate, so I put together various sheets with ship-stats on them so that I could run a range of scenarios. One of them was based around my Chinese treasure-junks. In an idle moment over the weekend I decided to set up the game.

Here are the mighty treasures ships, carefully maneuvering past some shoals. 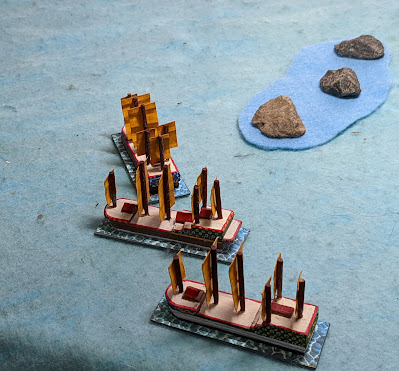 But a couple of opportunistic Dutch captains are on their trail, looking to grab a portion of the fabulous riches on board. 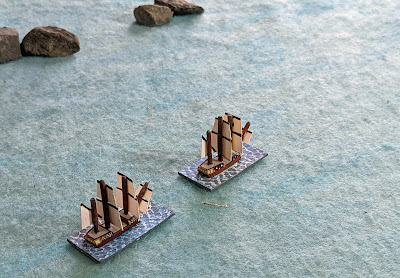 The junks formed a ragged line heading for the safety of the top-left corner, whilst the Dutch moved to intercept them. 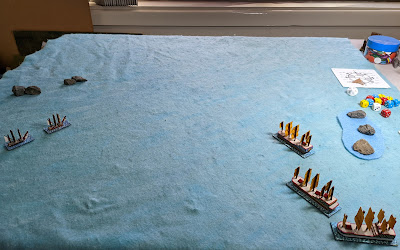 The Dutch close up. The wind was very lively during this game, and shifted from the south (bottom of picture) to the north (top of picture) fairly rapidly. This left the junks in irons. It then shifted to the north-west, making it hard for the Chinese vessels to reach safety and leaving them somewhat immobilised in the face of the Dutch attack. 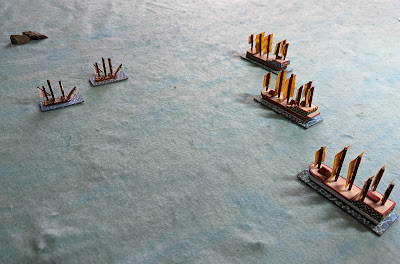 The Dutch open fire. The junks are a tough target to damage, but it's not impossible, and there was always the possibility of critical hits. 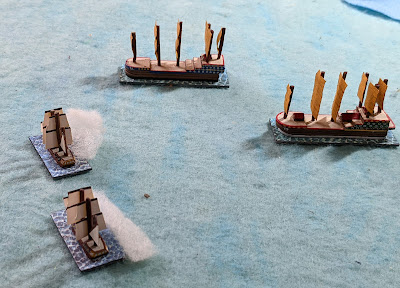 The Dutch kept firing as teh junks swung around to bring their broadsides to bear. The Chinese have strong gunnery, but with a low quality it's harder for them to bring it to bear effectively. The Dutch couldn't match. them for strength but could shoot twice as often. 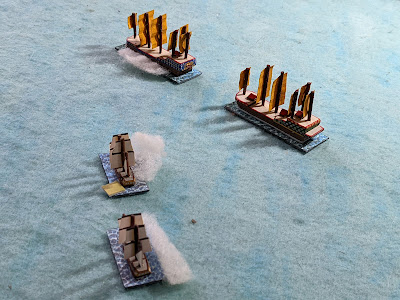 The Dutch eventually inflicted a hit on one of the junks. 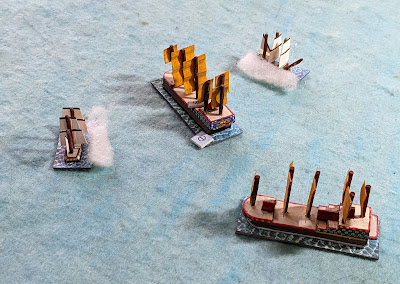 The Chinese, however, responded by taking one of the Dutch ships between two fires. 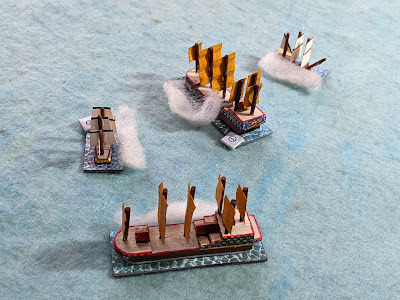 An overview of the action. The wind was still against the Chinese, who were moving to make a series of  tacks to get themselves to safety. Meanwhile one of the more agile Dutch ships was turning back into the fight whilst the other was starting to suffer damage. Slow and steady won the race; the Dutch ship suffered so much damage that it sunk. 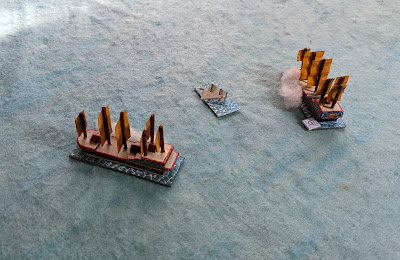 Two of the junks now headed for safety, whilst the damaged vessel did its best to follow them. The surviving Dutch ship tried to head back into the fight, but a lucky shot damaged its rudder, hampering its mobility. 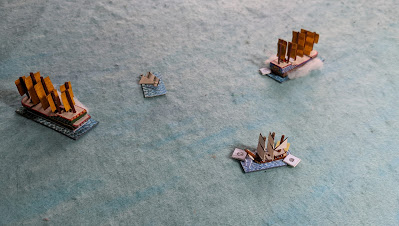 The Chinese steered carefully past some rocks. 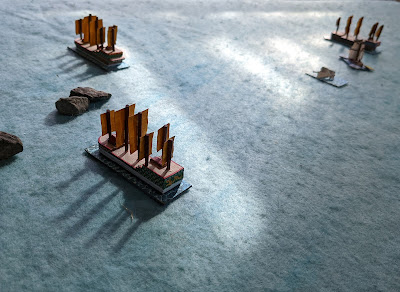 Unable to steer effectively, the remaining Dutch ship collided with one of the mighty behemoths. This wrecked the Dutch ship. I played out the end of the action to see if the Chinese could steer to safety. It was touch and go, and once ship came very close to hitting the rocks. 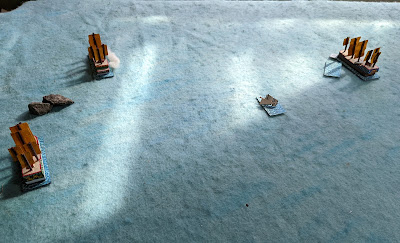 However eventually they all made it to safety. One junk was slightly damaged. 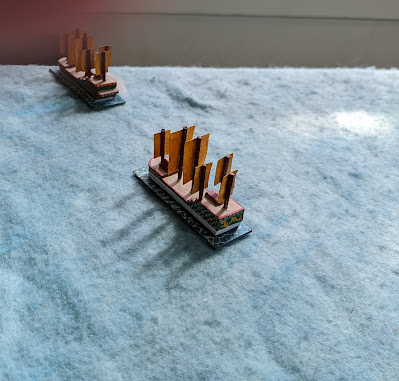 The Dutch lost both ships sunk.
I used the Cromster from the rules for the Dutch, and the Treasure Junk stats from the supplement for the Chinese (although only one had the Flagship trait). The Dutch should be able to win this if they can hit the junks with long-range fire and score some criticals to slow one or two of them down or to cause them to fail activations. As it was the junks, immobilised by the wind to a high degree, were able to concentrate short-range fire on the Dutch and give as good as they got.
Posted by Kaptain Kobold at 12:09