I had the chance to sit in on a game of Lasalle on Thursday, but, after setting me up my co-commander abandoned me for another game and left me to face Caesar on my own. My first solo game of Lasalle.

To make matters worse, I was running a Turkish army. Now my knowledge of Napoleonic tactics is pretty limited, but were I left with an army of one of the major players I think I could probably have a stab at using it effectively. But I had no idea what to do with Turks.

Anyway, here are some of Dave's lovely Janissaries, lined up beyond the crest of a hill. 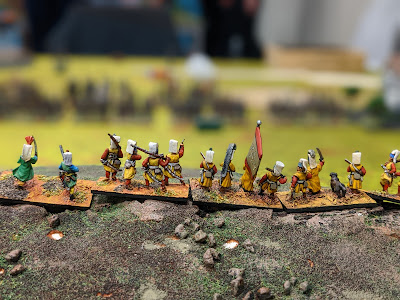 Caesar was using a veritable horde of Russian - solid cheap infantry in a great mass in the centre, with a grand-battery to their right and some cavalry on their left. My Turks were in a neat line with fortifications to protect them and a lot of guns, albeit rather poor ones. 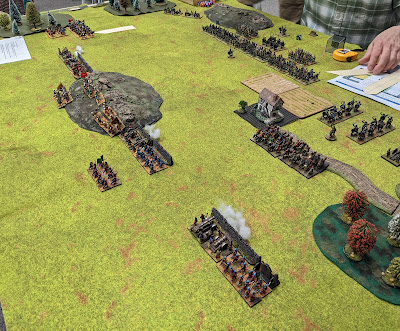 I seemed to have some half-decent cavalry on my right, so I sent them to deal with the Russian horse. 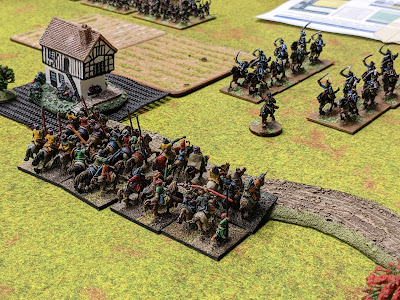 Meanwhile my artillery fired enthusiastically at the advancing Russians. 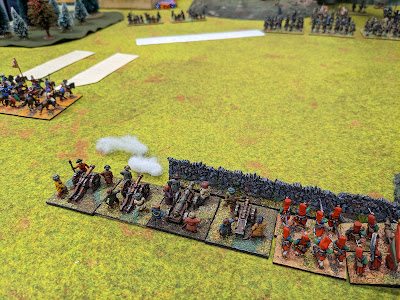 I wasn't sure what to do with my infantry. It looked rather thinly spread but I hoped that its musketry would hold off the Russian hordes once they came close. 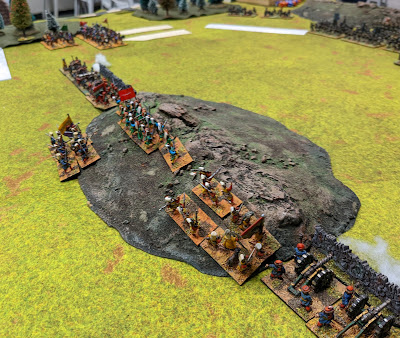 My excellent cavalry turned out not to be as good as the Russians, and was rather too quickly routed. This left my right flank looking rather vulnerable. 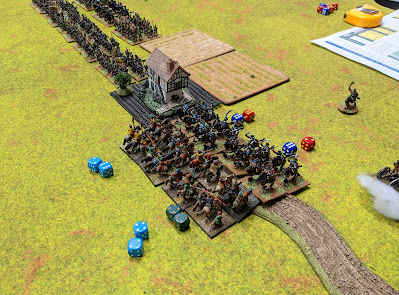 On my other flank I had swarms of light cavalry, which I used to force the Russian foot there into square, some of them masking the Russian guns. Unfortunately I also found out that the Turkish horse was rather fragile - they could dish it out, but not take it, and they soon became disrupted. 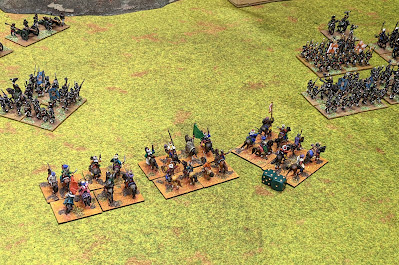 Still, I had a few goes at charging one of the squares; I;d checked the odds and there was a good chance of a win, since I had a two to one advantage and the lances my horse carry gave me a useful reroll. I failed to break the square, In fact my rolls in close-combat were singularly poor from start to finish - even when I could reroll ones and twos I simply rolled more ones and twos. 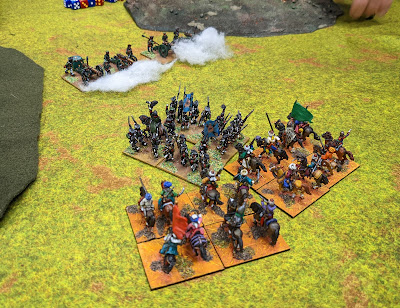 On the other flank Russian cavalry charged my guns and wiped them out. My infantry there were forced into square. 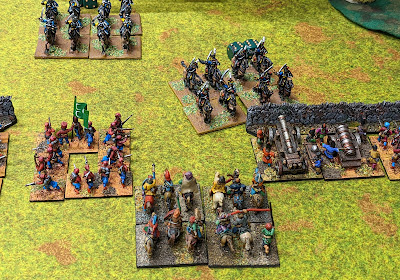 My surviving horse put up a bit of a fight, but this flank ended up with the Russian cavalry breaking through into my rear. 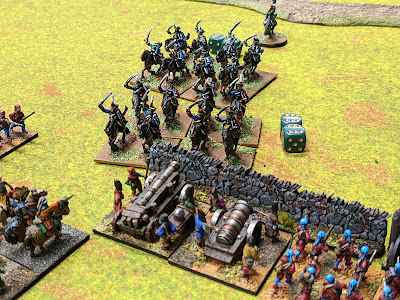 In the centre the Russian infantry continued to advance, despite taking steady hits from my artillery. They have a bonus when rallying in Lasalle, so whilst I was scoring hits, they green hordes were shrugging a lot of them off. 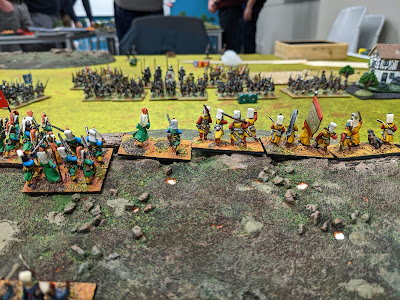 My one triumph was accidentally wiping out the Russian grand-battery. In Lasalle artillery fire bounces through the primary target unit and can inflict its on units beyond it. I'd directed my fire at the square partially masking the grand-battery, and whilst the square was hardly damaged at all, rolled a ridiculous number of sixes when resolving the bounce-through. In one turn the entire grand-battery was destroyed.
However that was it. I lost the cavalry I had on both flanks, which left my infantry unsupported, and had Russian cavalry in my rear. Whilst the artillery was slowing Caesar's foot, it wasn't going to delay it forever, and it was unlikely that my foot would hold their concerted attack for long. So I conceded.
I enjoyed the game though. Lasalle has a curious and disjointed turn sequence, which takes some getting used to, with both sides spending PIPs to perform actions and initiative passing back and forth. It makes for some interesting decisions, and by the end of the game I felt I'd got the hang of it. If only I'd had an army I felt more confident with. And fewer Russians before me.
Posted by Kaptain Kobold at 16:42