'Rear Window' is not one of the first films I would have thought of when I considered possible boardgame adaptations, but it exists, and it's surprisingly good. But then it's from Prospero Hall, who have made something of a name for themselves doing games like this.

I'm assuming you know the basic plot of 'Rear Window' - a photographer laid up in his apartment with a broken leg begins watching the lives of the various people in the apartments opposite his own, and becomes convinced that one of them has committed a murder. He and his friends set out to prove it.

The game is mostly a cooperative deduction game, and is similar to Mysterium in that one player must guide the other players to a solution by means of pictures on cards, and everyone wins if they get it right. However Rear Window does have a twist on this, which I'll come to later.

The lovely artwork on the game starts with the box. 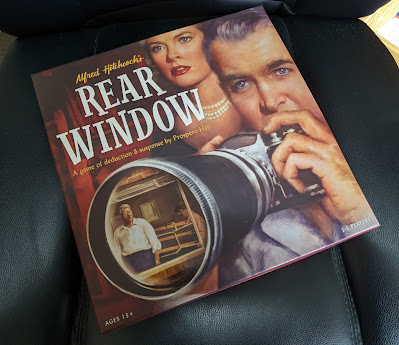 One player is the Director, and they set up a board like this. Each of the four letters A-D corresponds to four apartments, and for each one he assigns a person and a motivation/background. This is done semi-randomly. So on this board Apartment A is occupied by the Songwriter (Blue) who is a Athlete, Apartment B by Mr Thorwald (Purple), who is a Writer, Apartment C by Miss Hearing-Aid (Orange) who is a Globetrotter and Apartment D by Miss Torso (Red), an Animal-Lover. 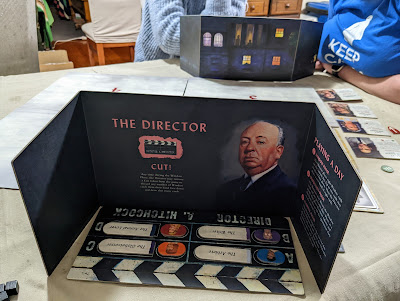 The players have four turns (Days) in which to work out who lives in each apartment, and what their motivation/background is. On each day the Director draws eight cards from a deck. The cards show characters or scenes through apartment windows, and he places these on a board showing the windows on the four apartments - two for each apartment.

The players then make their guesses or deductions, and the Director tells them how many they have right, but (obviously) not which ones. Note that the Director is not allowed to speak or communicate with the players in any way, shape or form, aside from through the cards.
Once they have made their deductions, the Director moves on to the next day and lays out eight more cards. By the end of the four Days the players need to have worked out all eight people and motivations.
The players represent photographer L.B. Jeffries and his allies, and they have character cards. Once per game each character can use their special ability to help the players gain more information. For example, Lisa Fremont can break into an apartment and force the Director to indicate what element, on one card, they are trying to bring to the players' attention. 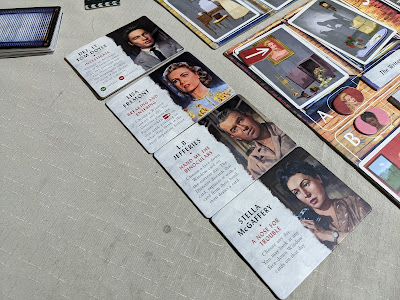 Anyway, we played two games last night, with me as the Director (because I'd read the rules) and Catherine and Maya as the Watchers.
The first game had teh setup I described above, and a good draw of cards meant that I was able to easily steer the Watchers to  correct solution in three Days. They didn't even use the character abilities.
The second game didn't go so well, but here's a picture of the final position so you can see the cards and windows in all their glory. By Day 4 they'd worked out the occupants of apartments A, C and D (a writer, a gourmand couple and a drunk police-officer), but whilst they knew Apartment C was occupied by Miss Lonelyhearts they couldn't pick up the clues I was leaving about her motivation. 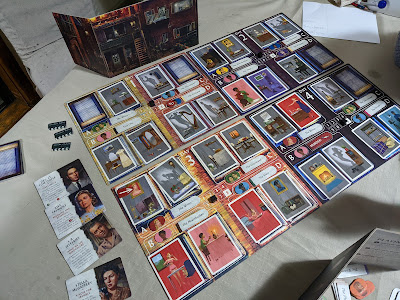 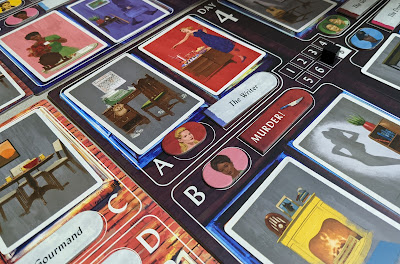 Anyway, my complete failure to demonstrate to the players that Miss Lonelyhearts was a photographer led them to believe that she was actually a killer. She wasn't, and we lost.
There are some advanced motivations which feature a second person, who must also be identified) but otherwise that's the game. I love the idea of the cooperative game where there's the possibility that the person you're supposed to trust may not be entirely trustworthy. I found it easier to play than Mysterium and it's certainly a lot shorter.
As you can see the artwork has a lovely period feel to it, very much adding to the enjoyment of the game. My favourite detail is the player-screens, with the outer side showing the facades of the apartments, so you're effectively playing the game across the courtyards and gardens shown in the film.
Oh, and there's a Hitchcock cameo on one of the cards ... 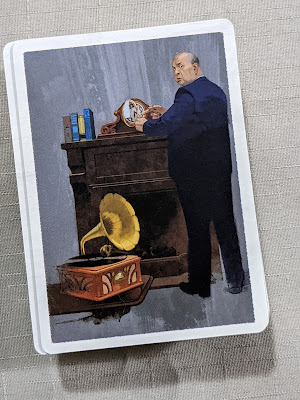