Caesar, Bailey, Ed and myself played Gaslands again yesterday evening. We rolled a scenario we hadn't played before - Flag Tag.

Basically each team had a flag located close (but not too close) to the board-edge and a decent distance from the flag of another team. The objective was to drive through another team's flag to capture it (at which point a replacement flag would be placed). The first team to capture three opposing flags wins.

I ran a Scarlett truck: 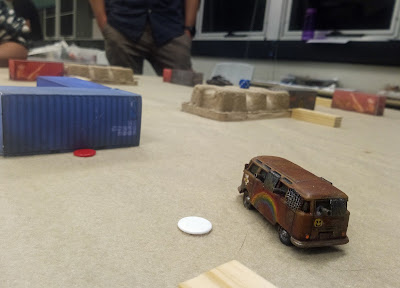 Caesar ran two Rutherford trucks, both armed with tank-cannon, Ed ran a couple of Idris racers and Bailey ran the trio of Maxxine buggies I'd used in my previous game.
The arena was fairly open. Red counters are flags. 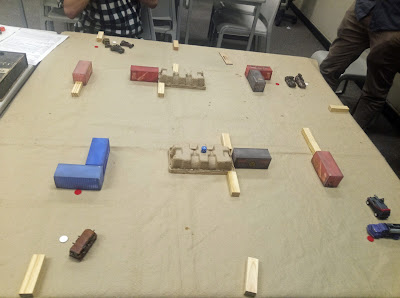 Bailey spent a couple of turns whizzing buggies around before settling on which directions they should go. The scenario does favour splitting up a little, which doesn't help Maxxine, since it's a team that scores points by sticking close together. However it is a scenario which favours vehicles that can manuever well, so they did have that advantage. 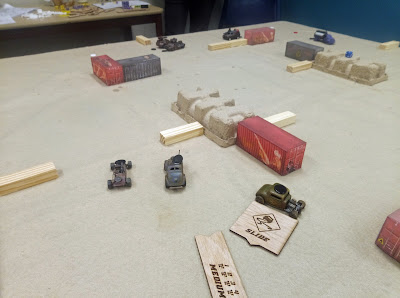 Caesar sent his trucks in two different directions, looking to grab two flags as fast as possible (mine and Ed's). His A-Team truck met Ed's vehicles coming the other way. The tank-cannon badly damaged one in the exchange of fire. 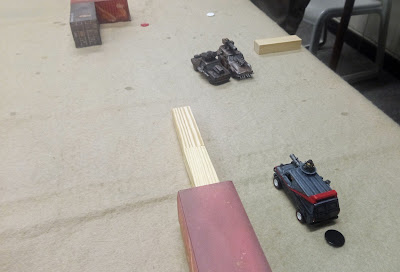 I met the other truck, survived the cannon fire and collided with it. My crew of desperados poured fire into Caesar's truck and let it know that it had been in a fight as we went our separate ways. Ed mad a run for Caesar's flag, whilst my slower vehicle struggled to get there first. I resigned myself to picking up the respawned flag after Ed had captured it. 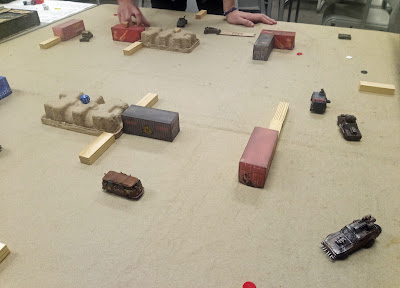 One of Bailey's buggies made a bold attempt to steal my flag out from under Caesar's nose, but he couldn't quite get the necessary spins and slides to do it. Sadly the buggy was then shot to pieces. 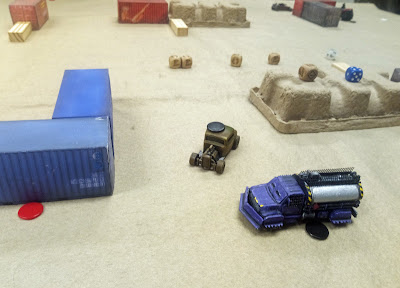 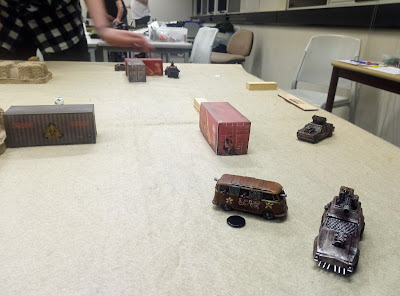 ... and in the subsequent ramming and shooting we wiped each other out - all three vehicles were wrecked. However in true Gaslands style I picked up a flag as my vehicle wrecked. 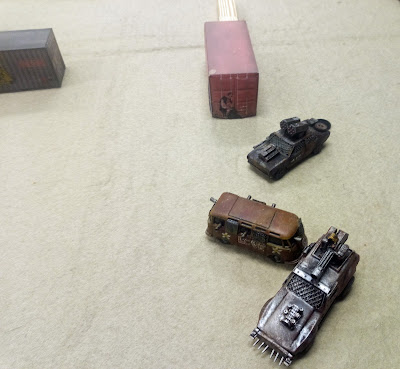 Having destroyed Bailey's buggy, Caesar picked up my flag, then slowly turned to come back and pick up the respawned flag. Having collected Ed's flag earlier, this would give Caesar the win. I resorted to cunning (gamey) tactics to stop him. Being allowed to respawn my vehicle I plonked it in the path of Caesar's truck, preventing him from immediately taking the flag. I then drove over my own flag, which basically destroys it, thus preventing Caesar from having it - although it would respawn, I could position it such that he couldn't get it.

Just to make sure, though, I destroyed his truck as well. It blew up and almost took out my vehicle. 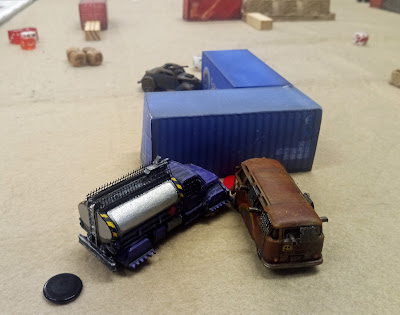 A final shot of Ed rushing to grab Bailey's flag - Caesar's van took him out before he got there. 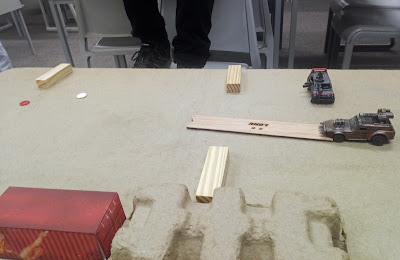 Time was ticking on and no-one was in a good position to pick up any more flags, so we had to call the game. We called Caesar the winner - he had two flags and looked set to pick up a third eventually. I think Ed and Bailey has, or were close to, two flags each. I had managed just one; this isn't a scenario that suits a single-vehicle team, since you really need to be in at least two places at once.
This was an entertaining game, with some quite fun tactics in play, and some varied approaches with regard to the teams. Despite not collecting many flags I was quite pleased with my vehicle's performance and plan to use this design again. I'd probably drop the Rear-Drive perk, though, and give the vehicle some more weaponry - maybe a couple of dropped weapons to improve its close-range firepower.
Posted by Kaptain Kobold at 12:00