Back again after three years! Wollongong's very own comic and pop-culture event took place once more this past Saturday, and once again Catherine and I were there, costumed up and ready to enjoy it. It was nice to see it as busy as ever, and it's even expanded into a new location (partially so the hall with the traders/artists wasn't so packed, which makes sense in these diseased times).
Anyway, I don't have many photos to show off this year; once again Catherine and I volunteered and, once again, we spent the day registering entries for the various cosplay competitions, which kept us pretty busy. We enjoy doing it, though, as we get to so most of teh great costumes close-to, and chat to some lovely people.
We did low-key cosplay this year - Sherlock Holmes and Joan Watson from 'Elementary', which has been some of our favourite viewing so far this year. Despite my love of all things Holmes it's the first time I've attempted a cosplay*, although Jonny Lee Miller's look is pretty easy to do. 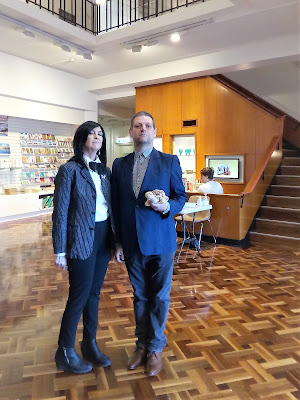 Since we didn't feel our costumes would be obvious to the casual observer, even one that's seen the programme, we added a prop. Once advantage of sitting at a desk all day is that we could have a static prop that would otherwise be a pain to carry around. And here it is - Clyde the tortoise. 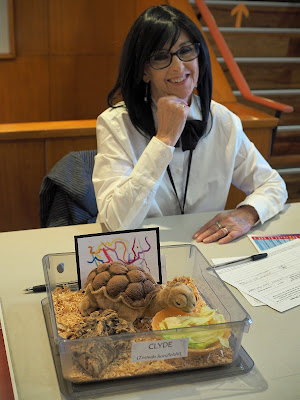 A lot of children asked if he was real, which makes you wonder if they've ever seen a tortoise before ...
Maya cosplayed as well. I can't remember the name of the character they did, but it's someone from the game 'Animal Crossing'. 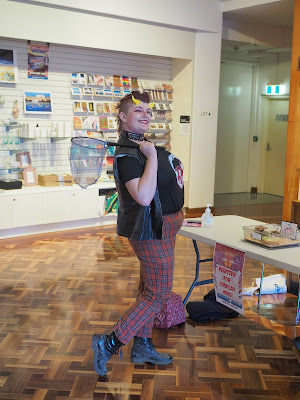 I didn't get any other decent pictures of the other cosplayers - as I say we were pretty busy. We were thrilled to see someone doing Stede Bonnet from the pirate comedy 'Our Flag Means Death'; that's been another favourite of ours recently, and I've very much admired his glorious outfits. I suspect that the bigger events coming up in Australia over the next couple of months are going to see a few costumes from that series.
And if you haven't seen it, there's a trailer:

*I did portray The Nihilist Klopman for ten days in Switzerland back in 1991, of a society trip there. And even a brief weekend as journalist and duellist Isadora Persano back in 1992 - a name and ID that I've since repurposed ...
Posted by Kaptain Kobold at 12:09