Blood On The Sands

Last night Victor and I did some playtesting for a gladiator game called 'Blood On The Sands'. This has been in development, on and (mostly) off, for around ten years now. Indeed I played a game of it at MOAB back in 2013.
Victor brought along his 54mm gladiators, for that extra spectacular feel. 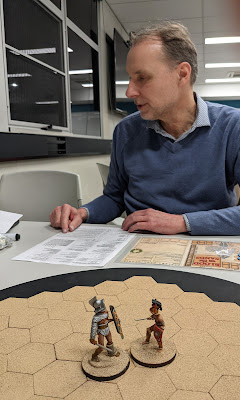 Blood On The Sands basically uses the same action dice system as does What A Tanker. A gladiator has six dice which they roll at the start of each turn. Each individual score is a type of action - 1: Movement, 2: Defence, 3: Recover 4: Attack, 5: Special Attack and 6: Laurel (Wild Card). Some gladiators can convert one dice to a particular type - the hoplomachus, for example, can convert any dice to Defence. Attacks are an opposed 2D6 roll, with a hit rolling for location and then how serious the damage is. Hits are recorded on special sheets for each gladiator type. 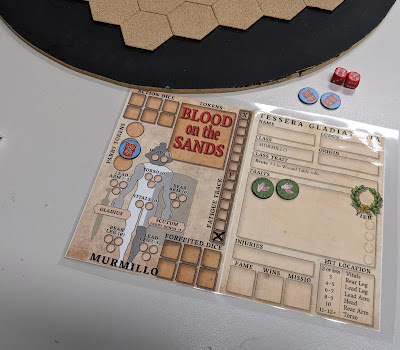 Anyway, we started off with a murmillo (me) against a thracian (Victor).I started off OK, but didn't manage my defences very well, took a nasty wound and got backed up against the wall. Collapsed with exhaustion in the end. 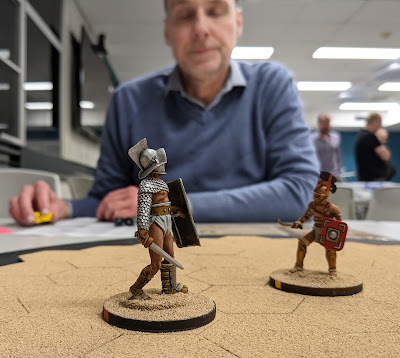 In the second game I used the murmillo again, and Victor switched to a hoplomachus. The latter can attack at a distance with his long spear, which was a pain. 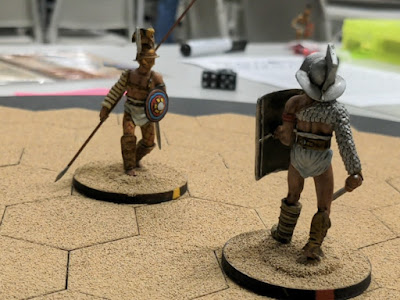 However I got lucky with an initial attack, scoring a critical hit with my first strike that saw the hoplomachus drop his spear and start bleeding heavily. He recovered his weapon, and nearly tripped me when I fluffed another attack. But I kept up a sustained attack on my opponent's injured arm, and eventually injured him enough (via another critical hit) to defeat him. Beat of three. Victor switched to a secutor and I used this heroic retiarius. 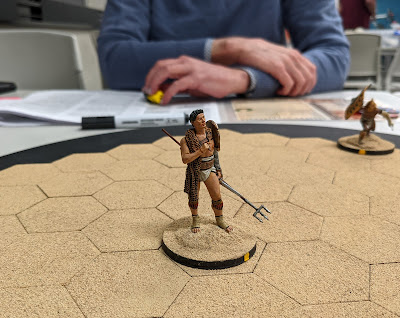 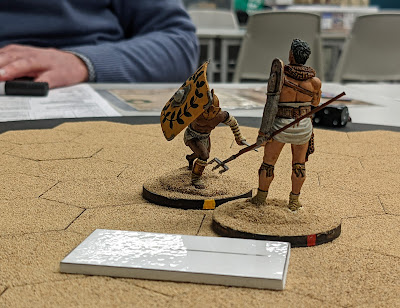 I never recovered. I took three serious wounds and literally bled out in a couple of turns, having barely troubled my opponent. 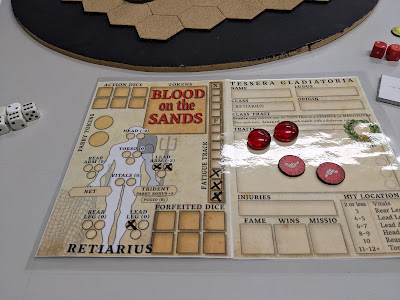 Blood On The Sands has a fair bit of detail, and there's a few tables to consult, but it does offer plenty of decisions, and each gladiator type (the game comes with six) feels different. The activation system works very nicely, producing equal measures of frustration and triumph. It looks like it will be a good game for those people who like a bit of chrome in their games. Each bout took about 45 minutes, but we were looking up a fair amount of stuff as we played. Once familiar with the rules I can see games lasting 20-30 minutes.
52 Games - Game 42
Posted by Kaptain Kobold at 09:33