With Pike And Musket 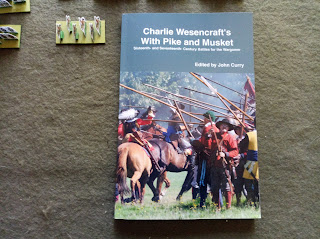 My book came! The 2009 reprint of Wesencraft's 'With Pike And Musket'. Given various postal issues, four weeks or so from the US to Australia was pretty good.

Anyway, this book was originally published in 1975, and, despite the title, is focused very much on warfare in the British Isles from 1550 to 1650, with a strong emphasis on the English Civil War. I have no objection to this.

It starts with a look at the weapons of the period, then covers the organisation of some of the armies - Elizabethan English, Irish, Scots and then those of the Civil War. It then dives into a series of chapters which build up a set of wargames rules for the period. Finally - and the bit I primarily bought it for - it has scenarios for 27 battles from the period, 20 of which are ECW actions.

The rules are kind of what you'd expect for the time, but are not without interest. They are centred around units having an effectiveness rating from 1-4, which can fluctuate temporarily or permanently during the game, and which affects firing, melee and what passes for morale tests in the game. The 'morale' tests are rolled when you want a unit to move, to charge or to receive a charge, and are a D6 roll with the effectiveness rating added to it. Read the result from a simple table to find out if the unit obeys order, stands its ground, falls back or simply flees for good. It's a prototype of the Fire & Fury system really. As a system I rather like it, although testing for every unit every time it moves could get tedious maybe.

The only gap I found in the rules was what happens after a melee. The rules cover how casualties are inflicted, but there didn't seem to be an assessment of winner and loser or any kind of morale test, implying that units simply fight until one is wiped out. And yet the rules do assume that one unit can force another to rout. But maybe I missed it in my first read-through.

The scenarios look pretty good, and cover a range of battles throughout the conflict; all the big classics are there, and some smaller one too. Unit details are deliberately kept a bit vague, and deployments, within certain limits, are up to the players. I like the simple terrain maps too; almost One Hour Wargames in their minimalism.

This is a fun book to read as well. I'm sure I read some of Wesencraft's stuff back in the day, but as a spotty teenager scouring his local library for any wargames books he could find. As a discerning adult I found the author's style as entertaining as the ideas an information he presented. I especially loved his section of why he adopts alternate moves rather than simultaneous ones.

I'm going to finish with my favourite quote:

"The secret of rule-writing lies in the ability to be able to take a detail of movement. fire effect, etc. study it, stretch it to its ultimate in an effort to cover all possibilities and then to simplify it until a playable rule emerges. So often that simplification is ignored."