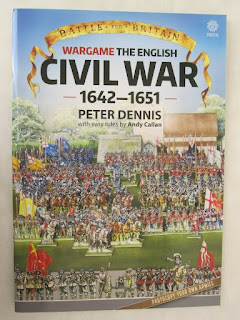 I have a new ECW book coming soon (maybe today if my emails are to be believed) and I'm very excited about it. This is partially why I've been dabbling a little in my ECW rules these past couple of weeks. Anyway, last night I tried another new (to me) set. A few months ago I bought 'Wargame The English Civil War 1642-1651' by Peter Dennis, which is basically a lovely book full of paper figures you can copy and assemble. At this stage I haven't rushed to make the armies, but the book also contains two sets of rules by the prolific Andy Callan. The first is a 'proper' set, and they look serviceable, although they seem to be reliant on units based around individual stands. The other set is designed as a 'beginner' set, and are ruthlessly simple. Naturally I gravitated towards the latter set.
They are two pages long and, as such, have a few gaps, but I read through them and felt they looked playable, and I liked a couple of the ideas in them. So I got out the recommended forces - four foot regiments, four horse regiments and two guns a side - set up the figures and gave them a go
The rules use three-base units, but that's nominal since no bases are removed. So you can use single-base units and infer the individual bases very easily.
The Royalist commander sees to his dispositions

The rules have a Fire/Move/Fight/Fear Test sequence. In the first two phases you dice to see which side goes first. Units which fire can't move. And movement is fairly restricted if you deviate from going forward.

Here we see some initial cavalry attacks on the flanks. They got stuck in on the very first turn. 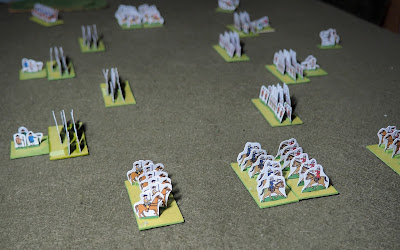 The foot regiments advanced in the centre and some fire exchanged. Both firing and fighting (close combat) have each unit roll a number of D6 (usually two or three) looking for sixes to score a hit on the opposing unit. When firing at anything other than close range you have to roll to confirm the hit, so firing is relatively ineffective. In this game the artillery exchanged a few shots, but the foot quickly advanced to mask it. Artillery is immobile and pretty useless. 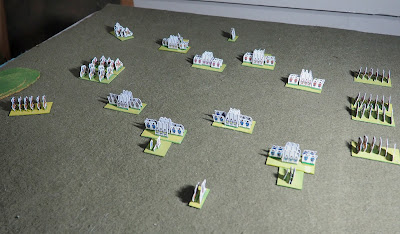 The Royalists adopted a static posture, whilst Parliament continues to advance. I used a die roll to 'decide' the strategy for each side - stand and shoot, a partial advance or an all-out attack. 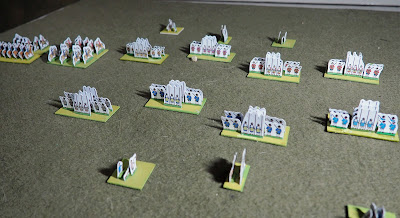 First blood - a Royalist horse regiment routed. If a unit takes hits during the turn then it must take a Fear Test at the end of the turn. This is a D6 roll, and you subtract the number of hits the unit has taken from it. a 1 or 2 means the unit is disordered, which severely restricts its actions in the next turn. On a 0 or less the unit routs and is removed. In close combat, only the side that lost (by taking the most hits) takes the test - winning a melee means that you don't test even if you took casualties. On the other flank a Parliamentarian horse regiment also routed. The white markers show hits and the red marker shows disorder. Fighting has one extra quirk; units normally roll 3D6, but you get a bonus D6 for each hit your opponent has more than you have. So if you start inflicting damage on your opponent there's a bit of a death-spiral effect. Oddly that didn't apply in this case - the Royalist unit had two hits and was disordered, but still managed to score one hit on its Roundhead foe, and took none in reply. The Roundhead then failed its test. Lucky. 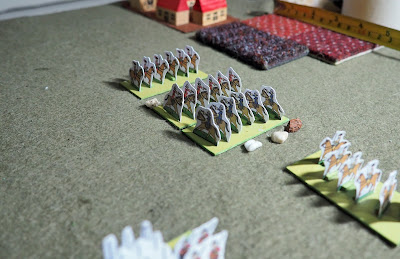 The foot continued to close in the centre and on the Royalist right the first melee takes place. A couple of Parliamentarian units had taken hits from firing, which would disadvantage them in the forthcoming melees. However on their right some horse was turning onto the Royalist left flank. 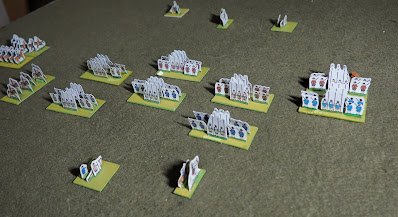 The foot engaged, and a Royalist unit found itself attacked to the front and flank. The rules don't cover how to resolve this; I ran each fight separately, but the flanked unit had to divide its dice. 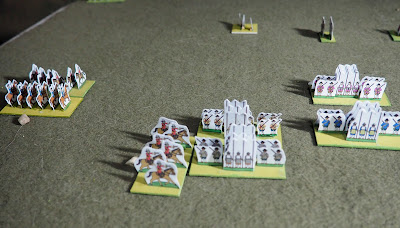 The height of the battle. Parliament had now lost a foot regiment as well as some horse, but most units were now closely engaged. 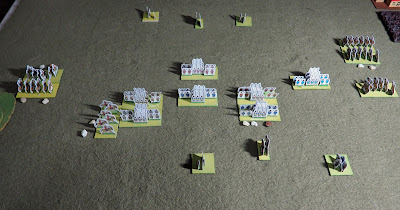 The generals now joined the battle. I'd forgotten that they could do this until halfway through the game. They can remove hits from units they join, and also allow a unit to reroll dice. But they risk being killed if a unit take hits, and count as a full regiment lost if they are.

And that's exactly what happened to the Royalist general. They'd also lost a foot regiment by this stage, putting them three units down. An army breaks when it loses four regiments. 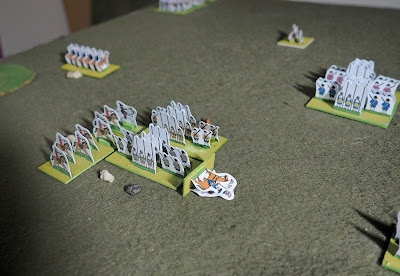 And on their right a Royalist horse unit broke, pushing the Royalists to four regiments lost. However Parliament were on three units lost now as well, and there were still Fear Tests to take. 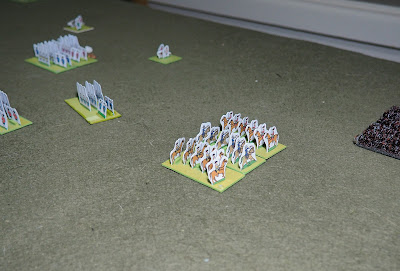 A Parliamentarian foot regiment was on five hits, giving a -5 to their Fear Test roll. 0 or less would be a rout. They rolled a six. They were disordered, but didn't rout. And that gave Parliament the win 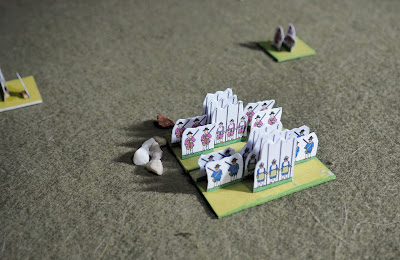 A final overview of the battle. There was still fight left in both sides, and some of Parliament's troops were close to collapse, but the loss of their general cost the Royalists dearly. 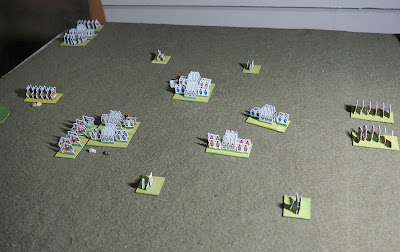 They rules felt pretty good, all things considered. I like the melee modifier for the difference in hits, and the Fear Test is a ruthless, but simple, morale test mechanism. If I played them again I'd start tweaking a few things - clarify movement a little bit, for example, and the wording on how generals operate (do they remove a hit each turn, or only the turn they attach to a unit?) Troop quality could be added by simply applying a +1/0/-1 modifier to the Fear Test, making raw troops prone to sudden rout or disorder and veteran troops a little steadier. I think the aim would be to lift or adapt bits from the 'proper' rules in the book.

Email ThisBlogThis!Share to TwitterShare to FacebookShare to Pinterest
Labels: ecw