This week we have mostly been deducing things.

For starters we've been playing a bit of Codenames.

In it players form two teams. One person in each team (the spymaster) has to guide the others to a group of friendly secret agents hidden in a grid of words (the Codenames) whilst avoiding revealing the enemy agents, the innocent bystanders or, worse, the deadly assassin. It's a simple game that you should be able to get most people to play, but the large number of word and different grid layouts give it a lot of replay value.

Here's the grid laid out. 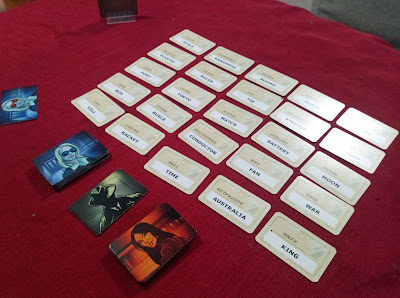 Two of the team-members have access to a card like this; they can see it at all times. This 'maps' the agents onto the grid of words. The colour on the outside of the grid tells you which colour goes first.

(If you applied this card in this orientation to the grid above, for example, 'Scale' would be a Blue agent, 'Kangaroo' a Red one, 'Round' an innocent bystander and the card at the very top right that's got too much glare to read the Assassin.) 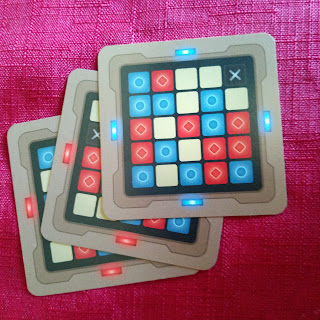 Here's a game on the go (not using the grid card above). Currently Red and Blue are evenly matched, having found four agents apiece. The spymasters guide the other players by giving a single word clue and a number of cards to which it applies; for example if both 'Kangaroo' and 'Australia' are Blue then the spymaster could say 'Antipodes-2'. The agent(s) then tap the card(s) they think the clue relates to, and they are covered up by a card relevant to their true nature. Your turn ends if you find an enemy agent or a bystander. If you choose the Assassin's card then the game ends and your team has lost. 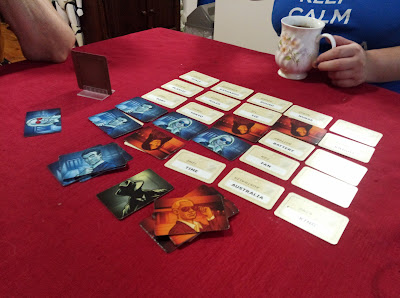 In fact we've been playing it with three players, which is interesting. In the three-player game, you have two spymasters who can see the board and who give clues, but the third person in the field agent for both; they play in both turns trying to interpret the clues. So the field-agent will always be on the winning side. They are encouraged to do their best for both spymasters. So essentially in a given game the two spymasters are competing against each other and the third person is 'neutral'. Obviously we rotated the roles around the table, and all picked up wins.
After spending the week finding secret agents, today we headed into town to play an interesting detective game - CSI Wollongong, run by a company called CluedUpp. Basically it's a scavenger hunt run across the city-centre, and managed by an app we all installed on our phones. Teams of up to six people set out to solve a number of murders. We did this last year, and had a good time, so thought we'd give it another go.

Teams are encouraged to dress up. So we did. We've started working our way through 'Elementary', so we allowed our costumes to be inspired by Holmes, Watson and Gregson. 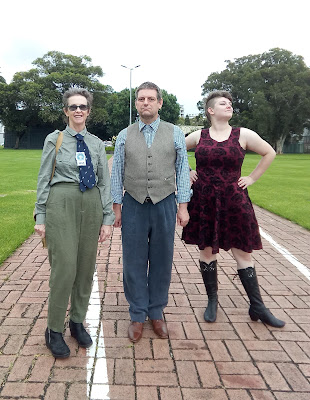 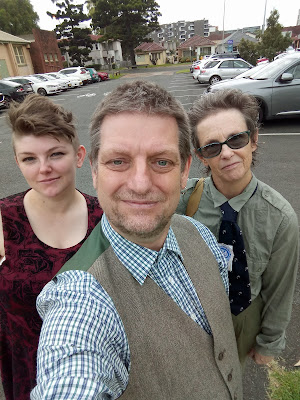 The app running the game shows us various points on a map of Wollongong where we'd could find witnesses or useful locations. When you got within a certain distance of the point it would show the character's details and you could pick up a statement and maybe interrogate them using a limited supply of questions. Sometimes, though, you'd have to solve a puzzle first and sometimes one would give you an object which you could take to a forensics lab to gain more information. Some points awarded penalties (usually time penalties) and some offered rewards (a time bonus or extra questions).
Here's the clues laid out on the streets of Wollongong at the start. Some clues open up new ones, which may require you to rethink your route. 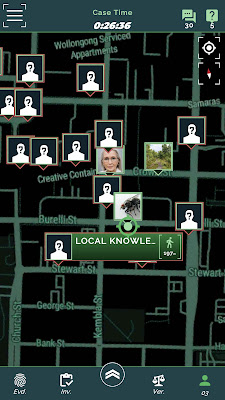 Here's a sample witness, although I have blurred out their statement (in case one of you ends up playing the game). 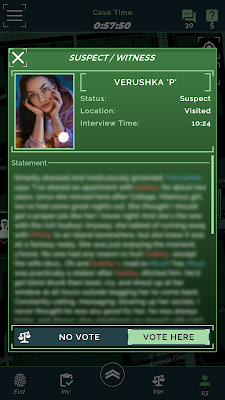 Once you have interviewed a few witnesses you could guess the killer at any time, but there was a massive time penalty if you got it wrong.
At the end of the day the winning team would be the one that solved it in the shortest possible time, but there was also prizes for best costumes, best team name and a few other things as well.
Last year we worked out the case very early on, but were too cautious and then spent ages verifying our solution before submitting it. This year's mystery was harder, and took us a couple of hours. In fact we'd ended up getting tired, it was raining and one of our team wasn't feeling well, so we opted to call it based on the evidence we had so far, and just call it a day if we got it wrong. We were lucky - our guess was, in fact, correct. So at least we went home with a win.
Both Codenames and CluedUpp count towards my 52 Games project as well.