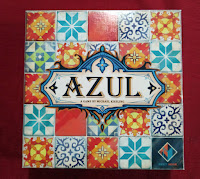 Our household is finding itself a bit directionless as a lot of our regular social activities are still suspended due to Covid, and we're still wary of going out and mixing with other people too much anyway.  It's thrown out a lot of routines, and our family thrives on a certain level of routine. Chuck in some work-related stress and it's  left us a bit drifting and aimless a lot of the time. It's dampened down a lot of my enthusiasm for gaming projects, for sure. So we're looking to establish new routines, albeit temporary ones, to try and kickstart our somewhat dulled brains.
One of these is to try and play a boardgame after tea on a Wednesday evening. We're one of those families that eat our evening meal in front of the TV normally (to be fair, one of the only times we watch TV), but a few months ago we started having a meal at the table once a week, on a Wednesday, and this builds on it. After all, if we're all already sat around a table, we might as well play something.
Last night we opted for Azul, since we hadn't had it out in a while.

As you can see, Mr Wednesday thought he might like to play, but we persuaded him otherwise and stuck to just three players. 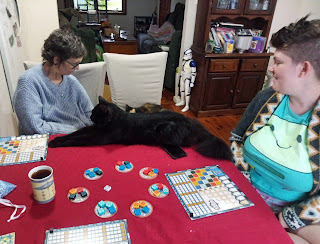 I've blogged about this game before HERE so won't repeat myself with the basics.

Here's my position early on; I got a nice tight high-scoring block of tiles in the middle of my board, giving me a good lead. 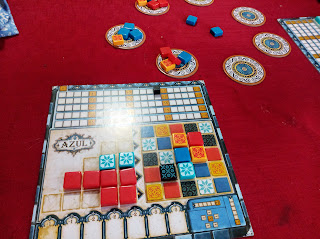 My position at the end - two rows, a complete column and two complete sets of tiles. This gave me a nice bonus score and left me a runaway winner. Maya dropped out at that point, but Catherine and I continued. We played the variant board, where the tile positions aren't pre-designated. This turned out to be quite interesting, although there was extra effort involved keeping track of the fact that a colour can only appear in each row and each column once. 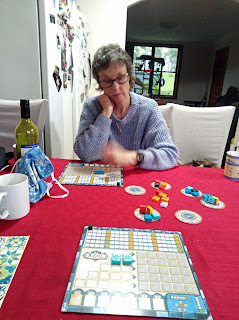 This was something I hadn't done before; at the end of a round I had all five rows ready to score, with one each of the five colours. I'd placed all bar two of the yellow tiles in the same round. 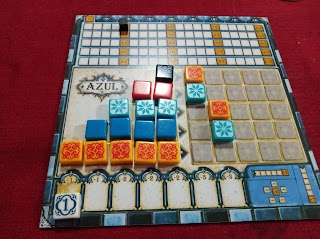 Any way, I won the second game, and Catherine and I played a third. I started badly in that (one round saw me lose my entire score to penalties), but came back and just clinched a third victory (by two points). I don't think anyone wants to play Azul with me any more.

Anyway, Maya's choice of game also added another entry to my 52 Games project, so that was nice.
52 Games - Game 9
Posted by Kaptain Kobold at 15:34