One of the things I hadn't quite realised about doing the 52 Games project is that I have to document even the most trivial of gaming experiences if it involves a game I've not previously played this year. So it was with yesterday, the end of January public holiday that some people celebrate as Australia Day. We had a busy day involving walks and lawn-mowers, but did fit in a couple of games. However we wanted things that were light and fluffy.

In the afternoon we played a new game for this year's project, Greed. This is one of Maya's games; a basic push-your-luck dice game. The dice have latter son them which spell 'GREED$' (with the E's being in two different colours), and you score points for various singles and combos. You can keep rolling until you decide to keep the score you have, or you get a no score. The first player to 5000 wins, although each other player gets one turn to beat them, so it's worth going over th limit by as much as possible. 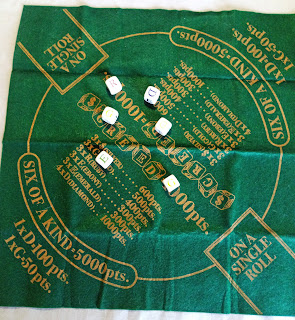 The lighting in the above photo obscured the dice, so here's a better shot of them. Anyway, there's not much more to say. We played three lively games and, as you can see, won one game each. In the third game (on the right-hand side) I took my score to a useful 4950 first, giving me a chance for a good margin over 5000. But Catherine and Maya were so far behind that it was unlikely they'd have caught up anyway. Saying that, Maya did score over 2000 points in a round in a previous game. 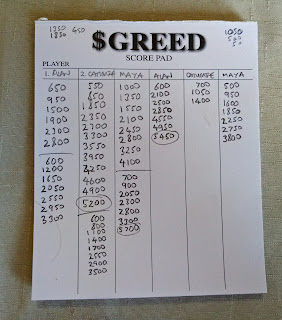 In the evening Catherine and I played more Codenames, but I've covered that game in a previous post. In the two-player version you work together to beat the clock; the 'opponent' automatically covers one of their words each turn, and you have to win before them complete their grid. We played five games, and won four of them, although two were with the lowest possible score. It's harder than it looks ... 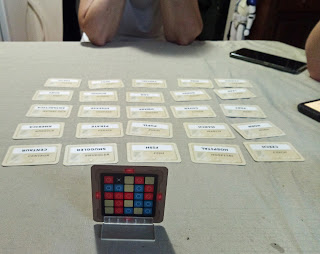