I had another go at First Newbury last night, this time just using my ECW Portable Wargame rules. However I simplified them a little - I dropped different types of Horse and just ran everything as 'Horse' and I used an idea I had for reflecting ammunition expenditure and similar reductions in firing capabilities later in the battle. This involved a change to the initiative system, and I'm going to indulge myself by going through it now.

I stuck to the idea that, in a player's turn, they can activate a number of units equal to about half what they started with. We'll call that the AV and it is half the number of starting units, rounded up.

Each turn, both players roll a D6. The player that rolled the highest goes first in that turn. See below for what happens on a draw. The number of units they can activate depends on what a player rolls:

So for this battle, both sides have 10 units and their AV is 5. On the first turn Parliament rolls a 4 and the Royalists a 2. So Parliament goes first, activating up to 5 units (the AV). The Royalists then take their turn, activating 4 units (AV-1).

But what if the scores are tied? In this case the side that went first in the previous turn goes first again. Both sides still use their die roll to determine how many units they can activate. However a double also triggers a Random Event.

If the score on the dice is equal to or less than the current turn, then the Random Event is automatically Reduced Firing Effect. For the rest of the game all firing is at -1. This simulates units going low on ammunition, battlefield smoke or even a weather effect such as fog or rain. This only happens once. If the event is not Reduced Firing Effect, then roll a D6 to see what it is. Or that's what I did; I worked out a table of six events and used that. But it was a bit sketchy, so I won't share it just yet.

Anyway, the result of this is that as the battle progresses it becomes more and more likely that firing will become less effective, making it more attractive for foot to resort to a push of pikes instead. It also means that you can't rely on dragoons or artillery to effectively shoot at an enemy all battle.

I took a few pictures of the game. Here's the starting positions. 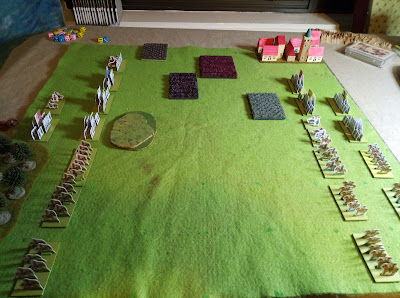 Unlike my earlier refight not all units move in each turn, but both sides went to the cavalry action on Wash Common. 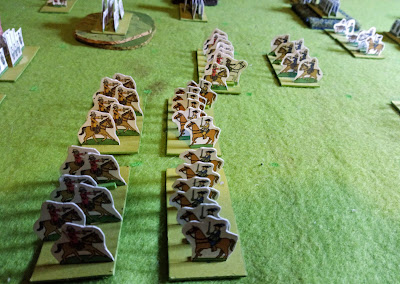 With the Portable Wargame having retreats as a combat option, this flowed back and forth very nicely. 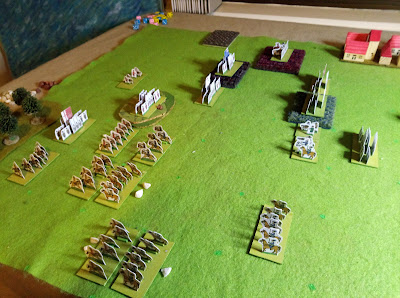 The Royalists held their foot back, and Parliament advanced, using a run of good initiative rolls, plus their gaining the upper hand in the cavalry action, to bring the fight to their opponents. They Royalist artillery was overrun by horse, and the Royalist right compromised by dragoons. But by this stage firing had been reduced. 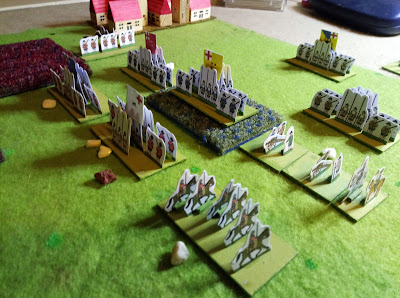 The Royalists fought back, and soon Parliament's foot were in trouble. 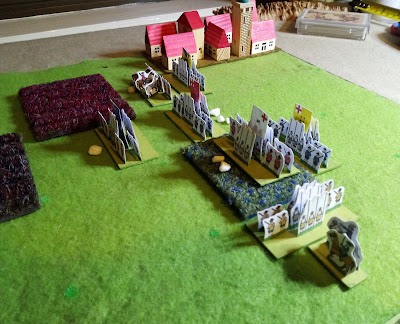 The Royalists had also won the cavalry action as well, and were mopping up Parliament's horse. 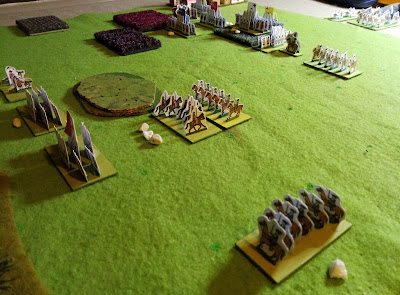 Parliament was now at half casualties, which meant testing on each of their turns to see if they continued fighting. Normally this requires a 4+ on a D6, but I ruled that if a side held Round Hill then they only needed a 3+. Parliament hold the hill and for turn after turn defied the odds to stay fighting. 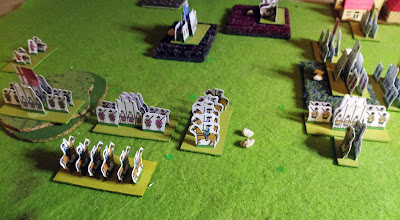 The Royalists threw all they had at their opponent, whittling down their units, but the Parliamentarians wouldn't quit. Specifically the foot on the hill (the London Trained Bands) held of attack after attack, causing losses to the Royalists that pushed them over their break point as well. 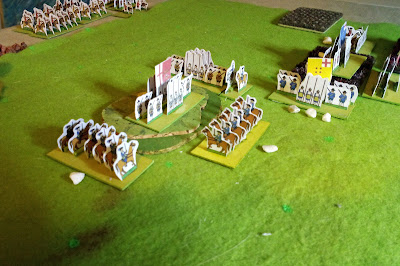 And the Royalists weren't so lucky; pushed to their break-point they failed their first army morale roll, and quit the field, giving Parliament and unlikely and pyrrhic victory. 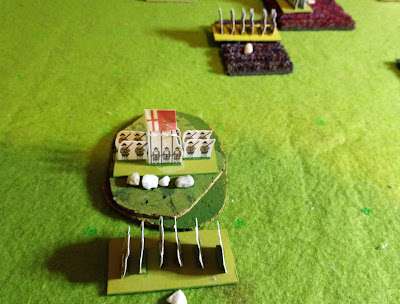 The initiative system worked well, and I was fairly happy with the reduced fire effect event as well. But I'd need to play a few more games to see if the timing of it works out.