I had another go at my ECW First Newbury scenario last night. The rules were a bit of a Frankenstein's Monster - I used the grid and movement rules from The Portable Wargame, but bolted on my adapted OHW combat system and added in the card-based initiative and random events system from The Square Brigadier*.

This is the view from behind the Royalist lines. 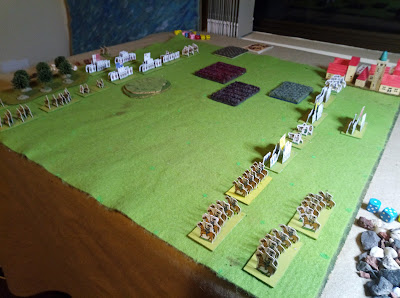 And the Royalist advance. In the middle can be seen Round Hill. I ruled that holding this hill increased an army's break-point. An army has to test to keep fighting at the start of each turn after it has lost half of its units; holding the hill meant that the 'break-point' was increased by one. 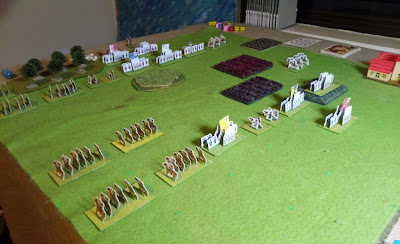 Parliament starts closer to the hill, so quickly occupied it. Meanwhile the two sides' horse engaged in a massed melee on Wash Common. 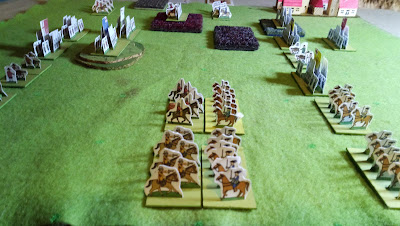 The Royalist foot was somewhat hemmed in by the cavalry on one side and some enclosures on the other, and didn't manage much of an advance on the hill. To be honest I focused their attention too much on the hill; they should have simply tried to wear down Parliament's army elsewhere. 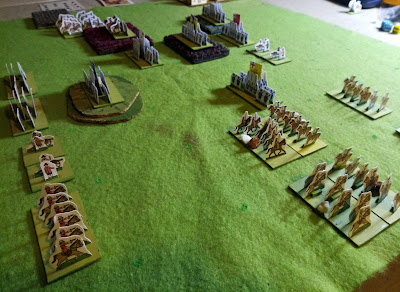 The cavalry action continued; the Royalists were suffering, but had the advantage in numbers and quality so could afford to trade casualties. 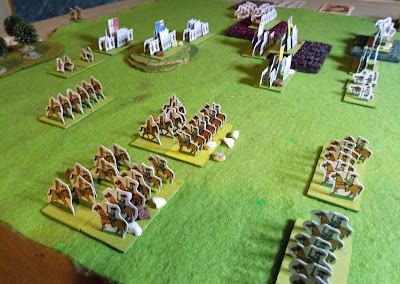 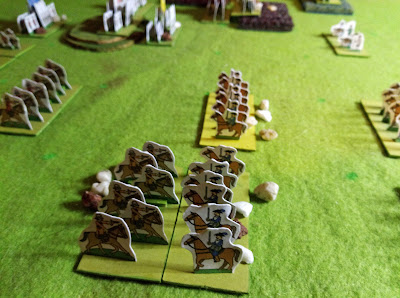 A view from behind Parliament's lines showing the Royalist advance. 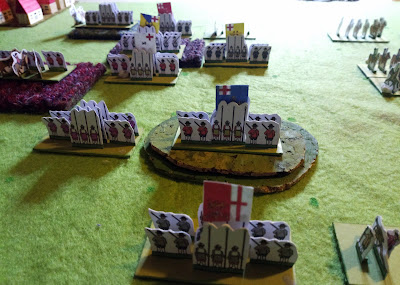 The Royalists attacked the hill, but it was an unenthusiastic and unsupported assault. 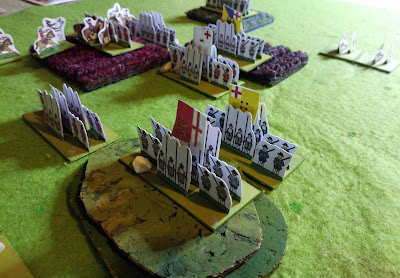 Over in the enclosures the Royalists had made a strong advance, but the loss of their supporting horse gave Parliament a chance to turn the flank. And they took it. 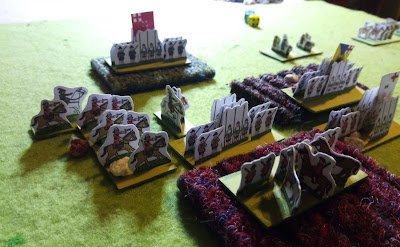 This left the Royalists fighting a defensive action in that part of the field. 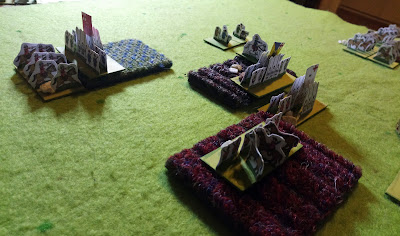 The Royalists were now winning the cavalry melee, although they had committed their second line. 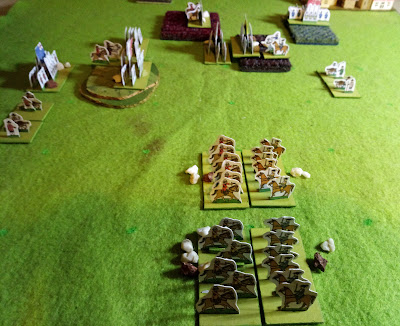 Unfortunately casualties on other parts of the field meant that they were unable to exploit their advantage; King Charles decided to withdraw and let the Parliamentarian army continue its retreat towards London. 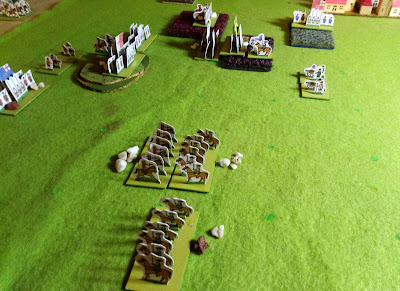 I didn't find this game as satisfying as others I'd played. I'm not sure if it was the mix of rules (which actually hung together quite well, all things considered) or simply that I was very tired when I was playing it. The OHW combat system is quite 'static'; once units are in close combat they stay there until one breaks. This meant that there wasn't a lot of ebb and flow, or maneuvering for position. But I like the out of ammo concept for the foot, where they can only shoot up to the point where the ammo runs out, and can then only melee. One of the issues I've had with my various explorations of rules for this period is the balance between shooting and close-combat; when do you abandon firepower and go for the push of pikes. Working out the relative risks and rewards has occupied a lot of my thoughts. OHW forces the issue by having units only able to do one thing or the other. I'd like to come up with a way to build something like that into my ECW Portable Wargame variant. At the moment I have a clumsy mechanism where units get a good initial volley, but after which shooting has less chance of a hit than melee. It uses a lot of markers though. I'm seriously considering a mechanism where all shooting is penalised after a certain point in the game, rather than it being determined on a unit by unit basis.

The card-based turn sequence (summarised in the footnote below) was interesting, but possibly a bit deadly if one side got a double move. This is partially down to the fact that all of the units on a given side activate in each move. It might work better if only part of a side's army was activated in each turn.

I might try a refight using just my Portable Wargame variant, but with some tweaks from elsewhere, and see how that goes.

*In Summary: A hand of cards is dealt out for the battle - one card per turn it is to last (I decided on twelve). A card is drawn each turn. The colour dictates the first player to move and act - in my case Red for Royalists and Black for Parliament. Face cards - J,Q,K,A - cause random events as well.