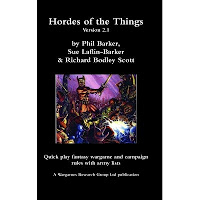 I was considering maybe doing another gaming project in 2020. In 2017 I did the 6x6 Project which was tremendous fun, albeit a bit of a 'mare to administer. So this time around I have decided to just do something on my own.

This blog was originally set up to replace the old Stronghold site for 'Hordes of the Things', but very quickly became an outlet for all of my gaming activities. So I have decided that, whilst covering the general stuff, I'd do something that was in keeping with its roots. The idea is HOTT 52.

Well, HOTT is a quick game, and easily set up. So I thought of setting myself the challenge of playing at least once game of HOTT every week in 2020. Not simply 52 games during the year - that would be relatively easy - but at least one game within any given week.

Since 1st January is a Wednesday (at least I think it is; I lose track of days in this weird perineum time of year), I shall run each week from a Wednesday. Within each seven day period from the 1st January onward, I will endeavour to play at least one game of HOTT and will record it here.

How far do you think I'll get?