I tried a couple more games of Simplicity in Hexes this afternoon. Once again Bolivar's Republicans took on their Royalist foes. In both games they defended.

The scenarios were, of course, lifted straight from One Hour Wargames, and were played with six units per side on a 6 x 6 hexgrid.

The first game was Static Defence - the Republicans had to hold a hill and a village against a Royalist attack. The Royalists would win by capturing one of the objectives. The Republicans had to defend both, and each objective had to be closely defended by two units that couldn't move more than a certain distance from it, leaving two units as 'free roaming' defenders. 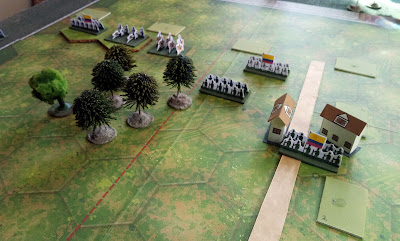 When I've played this before I've always gone for the hill as the target objective, but I decided that this time I'd go for the village. It's a tougher nut to crack, but closer to the attacker's baseline. 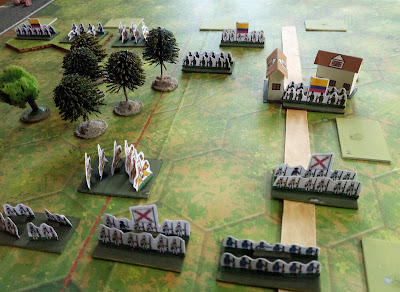 The Royalist cavalry pushed forward to try and drive off the infantry supporting the village. It didn't succeed. 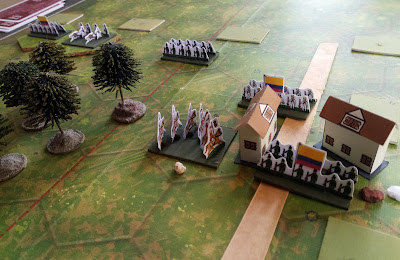 The Royalist infantry formed up, and poured musketry into the village, putting the defenders under extreme pressure. 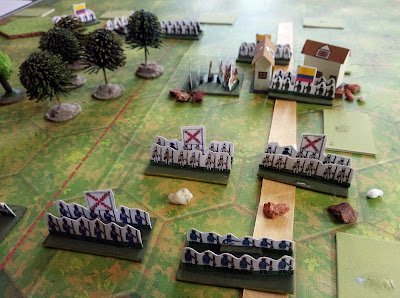 They soon ran, but other Republican units were defending the village closely, making an advance on it difficult. 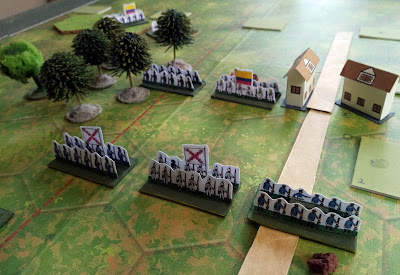 But the Royalists pushed forward, and soon drove the Republicans back. 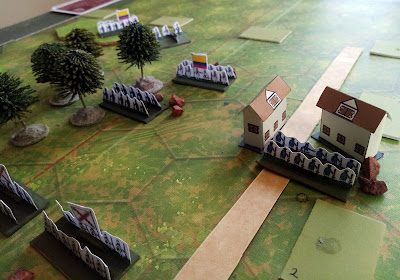 The Republican units defending the hill included some artillery, which attempted to shell the Royalists occupying the village, but the other Royalist units soon drove it away. 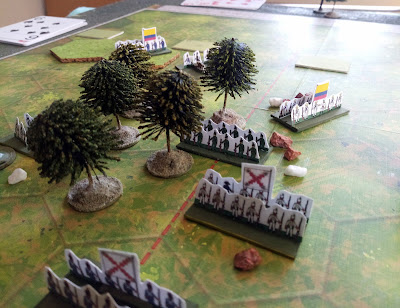 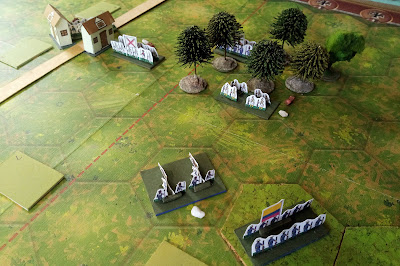 Eventually only one Republican unit remained, and that couldn't attempt to retake the village, so I declared the game a Royalist win. 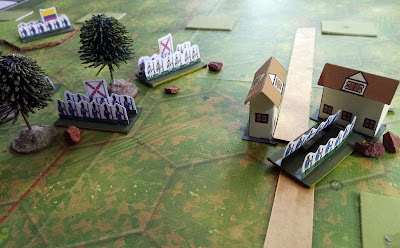 The next scenario I played is a fairly involved one; the Double Delaying Action. The attackers have to cross a river, take a village and exit two units off the board via a road. This would be tricky in the face of a strong defence, but the defenders have to withdraw units as well; one unit every four turns. if they fail to do this then they lose the battle.

The Republicans defended the village and river crossing with line and light infantry. The ford on their right flank was covered by more line infantry, supported by skirmishers, and would gradually fall back. meanwhile on the baseline a battery of guns and some more line acted as a reserve, as well as a source of units to withdraw from the battle. 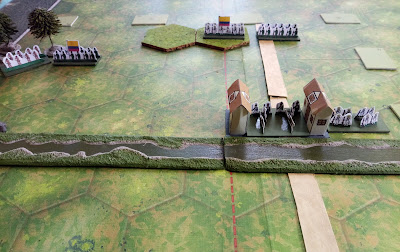 The Royalists arrived, and launched straight into an attack on the village. Their lead unit was decimated almost immediately. 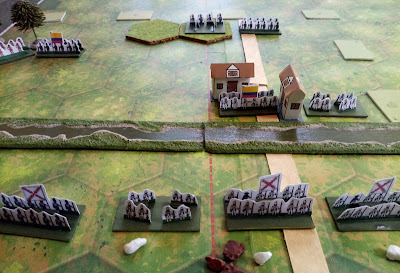 The Royalists attempted a charge, which was repulsed. 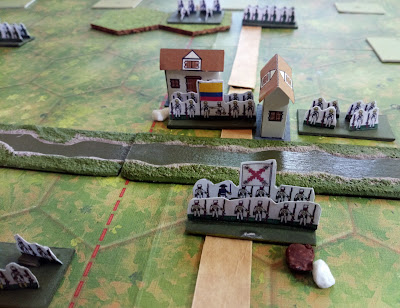 Their cavalry crossed at the ford, but its advance stalled when it was trapped between the village and the guns, neither of which were an enticing target for a charge. 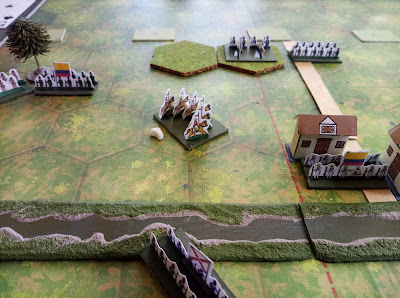 With the Royalists on the back foot, the Republicans withdrew a line unit. It simply wasn't needed. 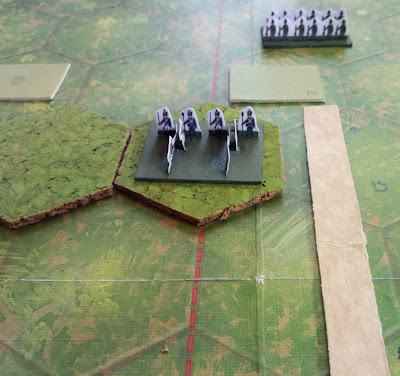 The Royalists put pressure on the village, but couldn't drive out the defenders. Their crossing at the ford saw them lose another line infantry unit. 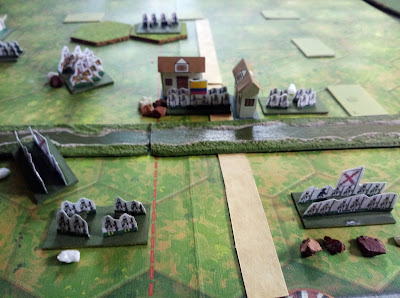 The horse was scattered by the artillery. 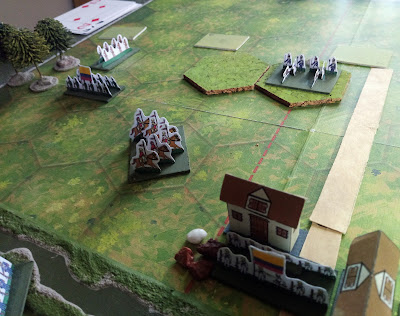 Eventually they pushed into the village, but by now they were so reduced in units that reaching the road exit was going to be pretty much impossible. The Republicans withdrew their artillery. 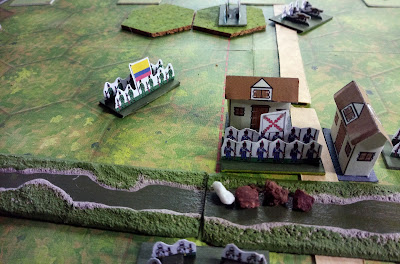 Eventualy the Royalist attack was reduced to a unit of skirmishers. The Republicans won this one. 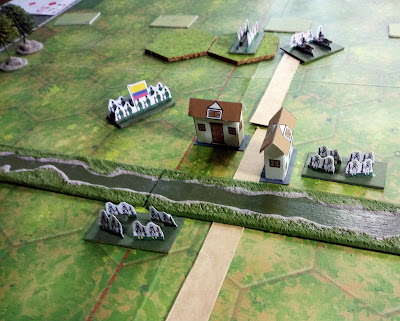 The rules held up OK, but I still have a few issues with the idea of moving adjacent to an enemy unit always being counted as a charge - what if the hex-border is terrain neither unit can cross for example? I created a couple of situations where units were forced into 'impossible' situations. I did actually add in a change to allow units to retire as well; if not adjacent to an enemy unit, and unit can move 1 hex directly to its rear without changing facing, so long as it doesn't move adjacent to an enemy in doing so. I think I may create an editabe copy of the rules, and play around with them.
Posted by Kaptain Kobold at 18:24