Another week of wargaming missed, but another week closer to our first performance on 8th June!

I'm actually quite excited. Yes, there's a small part of my brain that reminds me that I could walk on stage and simply forget everything I've learned, but you don't listen to that bit. But most of me is keen to get up on that stage and do my thing. My solo act is now pretty much where I want it; I have all the moves and timing sorted, and the costume all assembled. We're mostly there with the costumes for the group performance as well, but there's some sequences near the end of the performance that we all need to practice a lot more. No point in looking good if we don't have the moves.

We did a quick post-rehearsal shot of the group as well. Two people are missing, and on the night there will be more makeup and sparkle, but this is what we're taking on stage. 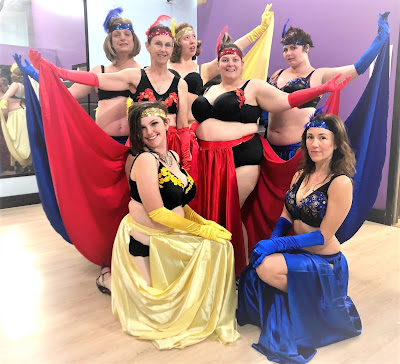 Update: It's pure coincidence that we are dressed in the colours of Gran Colombia.