Up until now we've played What A Tanker with big models on a large table, but I wondered how it might work with smaller models on a smaller board. So I set up a quick game this afternoon, using the 1/285th scale models from Memoir 44 on a 2' square board and converting all distances to cm.
I ran a Sherman (Strike 6 Armour 6) against a Pz IV (Strike 7 Armour 5). The terrain was an area of low-walled field, woodland and surrounding hills and rises. 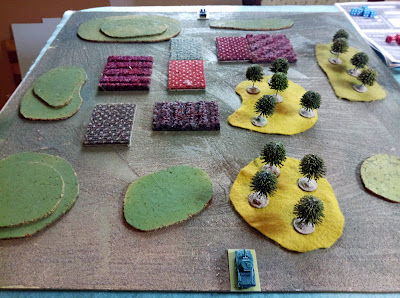 The Pz IV made a run for the fields, exposing its flank to the Sherman. At this range, and with a large number of low obstacles in the way, this wasn't as dangerous as it could have been. 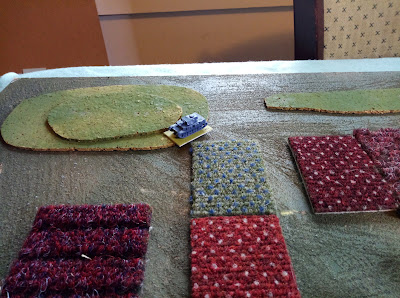 The Sherman seized initiative, and got into a good firing position, but couldn't get in a shot against the German tank. 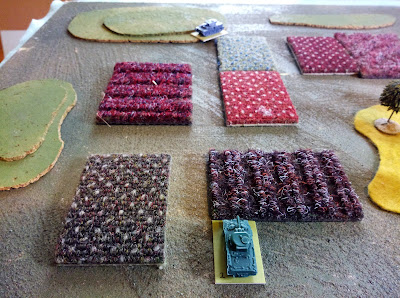 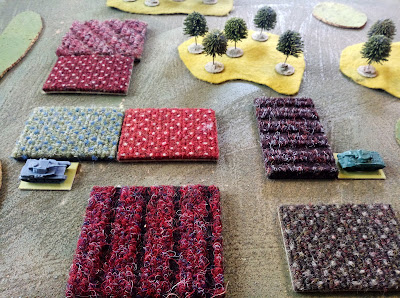 ... and got in a shot. The Shermans tracks were damaged. 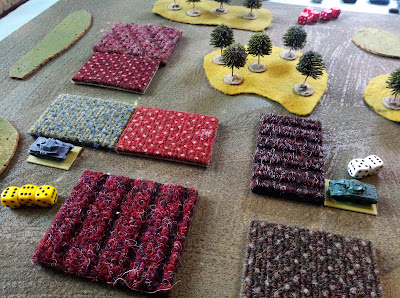 The Pz IV moved to the cover of a field boundary, whilst the Sherman backed up. But the damaged tracks made its movement very slow. 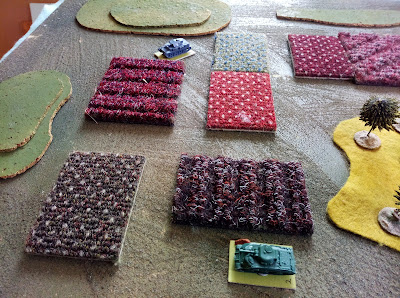 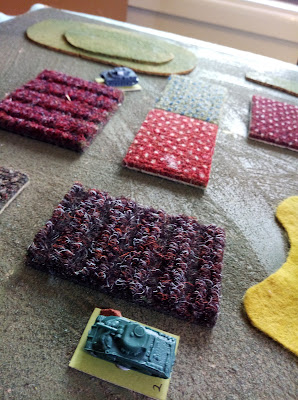 With the Sherman struggling to move, the Pz IV closed the range. 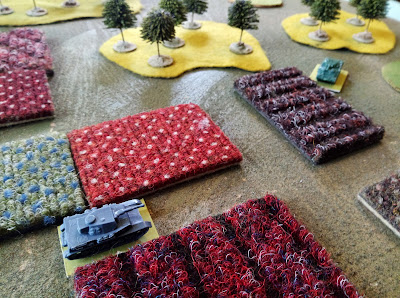 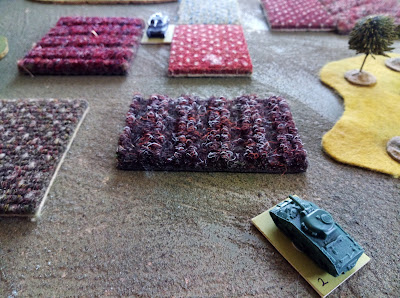 The Pz IV took up position behind a wall, whilst the Sherman tried to back into the woods. The Sherman scored a hit on the Pz IV, but it was easily recovered temporary damage. 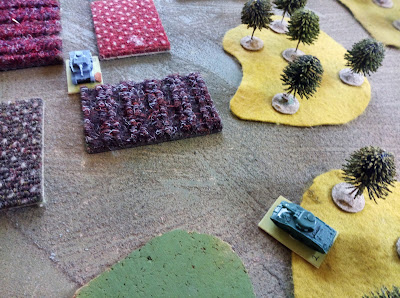 The Pz IV took a risk; grabbing the initiative, it turned and ran along the lane between the fields. 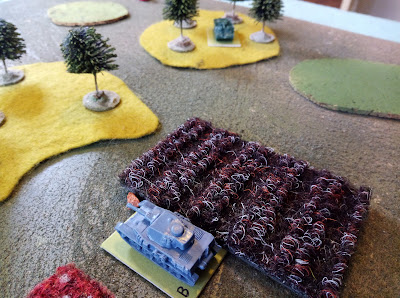 Making use of an exceptional number of movement dice it was able to move around the Sherman's flank through the woods. 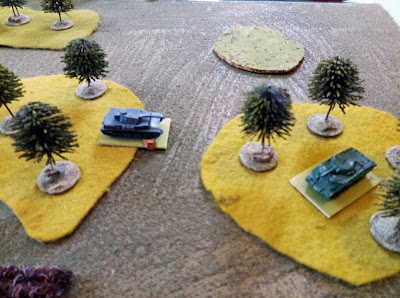 The damaged Sherman struggled to respond, and the Pz IV worked into its rear. But neither tank now had acquisition.

(You'll notice a small stone against the tanks in some pictures. None of the turrets rotate, so I used the stone to mark which way the gun was facing, unless it was facing forward.) 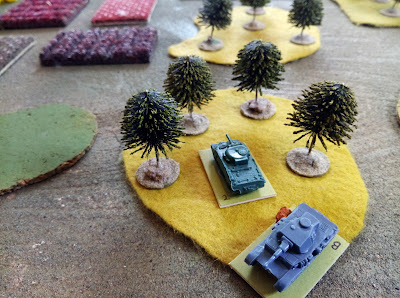 Before the Pz IV could acquire the Sherman, the British tanks (yes, it's a British one) managed to roll some decent command dice and drove off as fast as it could. 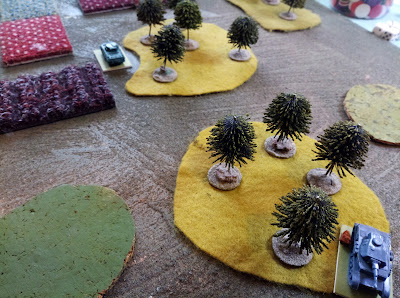 The Pz IV pursued, and the Sherman was forced to turn at bay. Another hit saw its optics damaged. 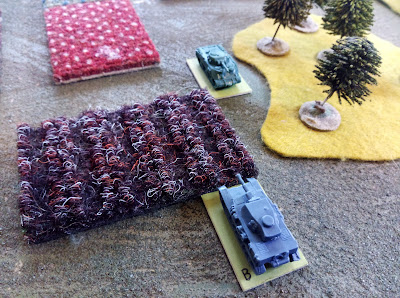 Both tanks tried to acquire, aim and shoot, the Sherman slowly backing away to spoil the German tank's aim. But the Pz IV rolled a blinding Doube Six hit - two extra strike dice! Plus another from a wild dice. With ten strike dice being rolled against it, the Sherman was doomed. 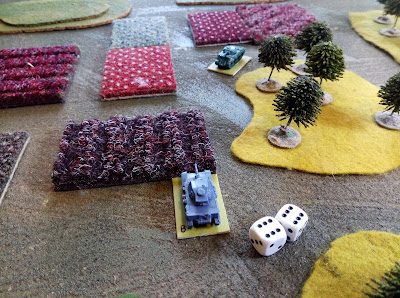 Or not. Only a 5 or 6 scored damage. The German's shot bounced off the Sherman's armour. As did the next. 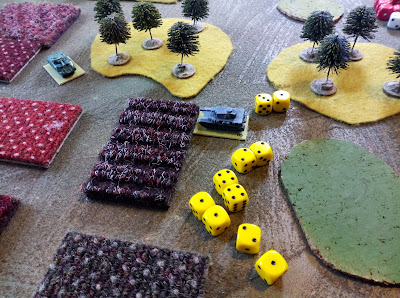 The Sherman also scored a hit, but again it failed to penetrate the German's armour. Rapidly losing the action, the Sherman tried to make a run around the German flank. 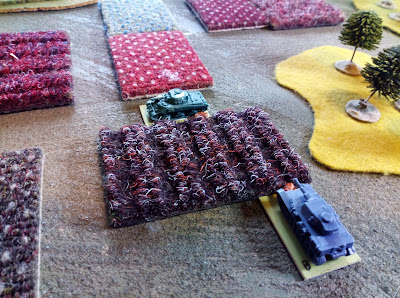 And made it. But it suffered another hit on the way, damaging its turret again. 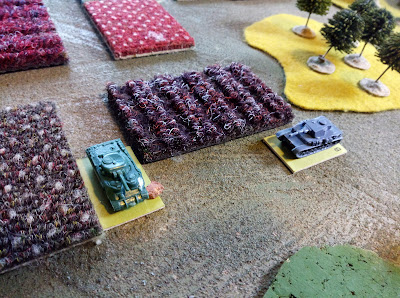 Before it could line up a shot, the Pz IV fired again, and scored a fourth permanent hit on the Sherman. With the Sherman only one having one command dice left, I called the game a German win. 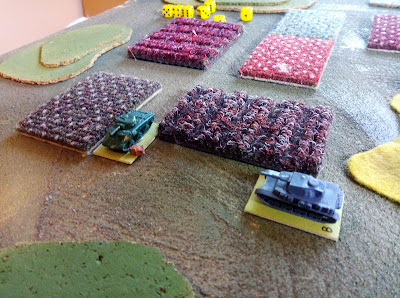 The game worked pretty well at this scale, although the dense terrain on the middle made it tricky for either side to get an easy shot at the other. The game delivered some exciting moments, and I'll try it again when I get a chance.
Posted by Kaptain Kobold at 16:57