When I signed up to Forgotten Heroes I had a few ideas as to who I might do. Captain UK won out because I had a usable base figure and I thought that it would be an easy conversion. And Captain UK is now finished. So I have the rest of June in which to do one of my other options.

I have chosen to do Jenny Everywhere.

The link above tells you pretty much everything you need to know about this open-source character. All there really is of her is a description, and even that is pretty open-ended. However for Jenny Everywhere Day 2015 I did a piece about her on this blog in which I developed her as a superhero, including stats for the Supercrew RPG. In looking for artwork for that piece I noted that whilst she seemed to have been depicted in a whole range of art-forms, no-one had attempted a miniature figure of her.

I will base her on an expanded description in the Public Domain Super Heroes Wikia:

Jenny Everywhere exists in all dimensions at once. She has the accumulated wisdom of all her other selves, and she can potentially shape or change dimensional properties. Since she exists everywhere at the same time, she may find herself in any situation, be it riding dinosaurs in the Wild West or arm wrestling Richard Nixon on the moon. For the Shifter, any adventure is possible.

Jenny prefers to get out of dangerous situations without the use of her (undefined) powers. She thrives on the thrill and always plays fair, even if it brings her close to death. The goggles and scarf were her mother's, who was a famous pilot before she disappeared.

The base figure is Alexandra from the Wayfarer Tactics Character Compendium, a collection of 18mm 3D printable figures from the prolific Dutch Mogul. Here's how she looks in the software I use to prepare things for printing. 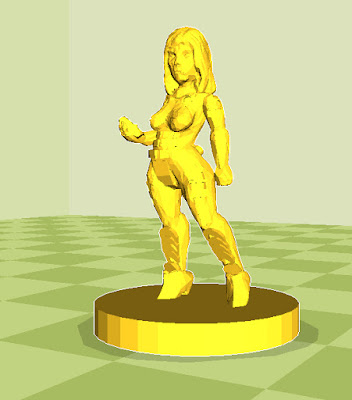 She's an 18mm figure, so I scaled her up by about 50% to get her to a suitable size such that she is compatible with Heroclix figures.

And here's the printed version: 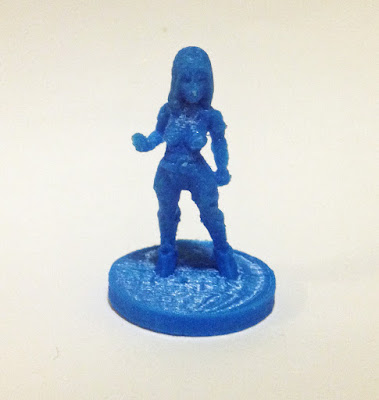 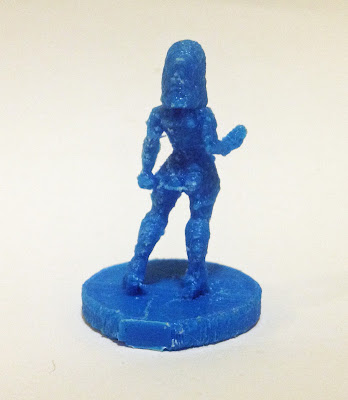 There is actually a 28mm version of the same figure, but she is, shall we say, heroically slender. She'd look great as the basis of a conventional female comicbook superhero, but I see Jenny Everywhere as having a less 'traditional' look.

I'm hoping that this will be an easy conversion, since to some extent I can pretty much make it up as I go along. I'm not planning on using a particular reference image for her clothing, but will go for something ordinary, rather than spandex and unstable molecules. The first thing I will do is give the figure an undercoat, mostly because I can't really see what I'm doing with that bright blue plastic. Then I can tidy the figure up. The two obvious things which will then need to be modelled are the flying-goggles and the scarf, but I'll also do her outfit at that stage. And that will be it. Painting will follow, followed by her being chopped off her base and transferred to clear perspex. Then she'll be ready for a game of Clobberin' Time!

Finally, because it's the right thing to do at the moment, here's Jenny Everywhere with a rainbow background.