We played more Chain of Command last night; Caesar ran it, whilst John and I pushed troops around. Caesar also wrote this excellent description of the game for our club's Yahoo Group, and once again saved me from having to do anything more than upload pictures and add a few comments.

"We played a low-key game of Chain of Command last night, in the meeting engagement of Scenario 1 of the rulebook. Alan commanded a regular British platoon, supported by an additional light mortar and adjutant. John P commanded a regular German platoon, supported by a dreaded flame thrower team. Ralph kindly provided beautifully painted 1/72nd scale miniatures which, based several figures together, allowed us to trial marking casualties, rather than removing individual figures. Yes, we proved that Chain of Command will work with these figures, or indeed FOW 15mm figures.

John seized the initiative and with covering MG fire and the odd spurt of Flammenwerfer (nasty!), took the woods on his left flank, with a British section toasted and on the point of collapse. Alan’s NCOs must have been leading from the front, because they copped a few casualties, limiting their ability to direct troops. However, the Brits held firm in a ruined farmhouse in the centre (seems to be a running theme with Alan), repulsing Handgranaten assaults and reducing a Jerry section caught in the bocage labyrinth to a paltry MG. Meanwhile, some nifty German fire-and-movement on the other flank brought the remaining British section under deadly MG42 fire and the British morale dropped dangerously low. With reduced command dice, Alan called it a day.

Apart from feeling the absence of Gary and his rules knowledge, and my confused thumbing through the rules at all the curly questions coming my way, it was a very satisfying game – thanks to Alan and John for your enthusiasm and patience. I look forward to revisiting Scenario 4 on the Eastern Front in several weeks. When I can track down a decent quick reference sheet I’ll be truly happy!"

So here's the terrain, with the strange bocage 'maze' down the middle. 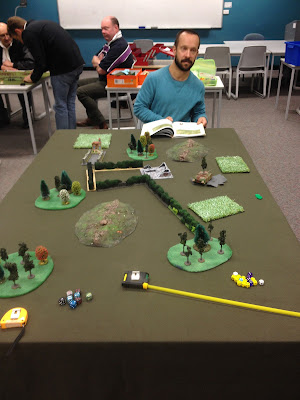 The British opening moves were on their left, covered by a hedge and a wood. 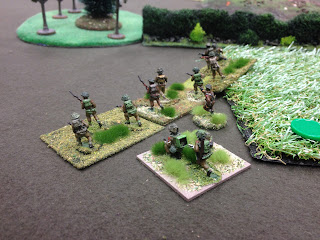 On the right I brought on a strong squad, but it fell foul of a lucky leader casualty and some attention from a flamethrower. I got in a few hits before their morale collapsed, but it was mostly a disaster for the boys in khaki. 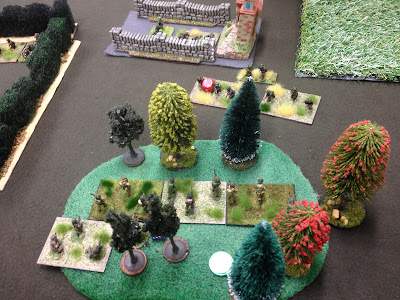 I had more luck in the centre, where the Germans hopped a hedge and ran into an accurate hail of fire from a ruined building on the other side. They threw grenades, hoping to make an assault, but failed to make an impression, and got shot up some more whilst they milled around in confusion. 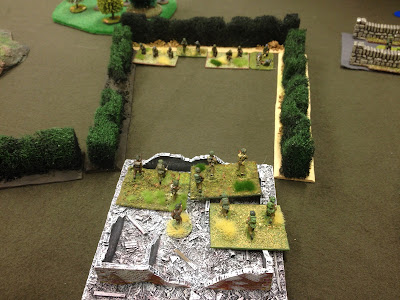 The main action, in one picture. 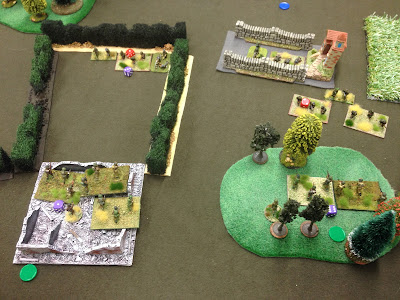 On the British left they got in some good shots courtesy of a Chain of Command dice, but steady fire from a German MG soon took its toll, and whilst the Germans suffered casualties here, the British suffered more. 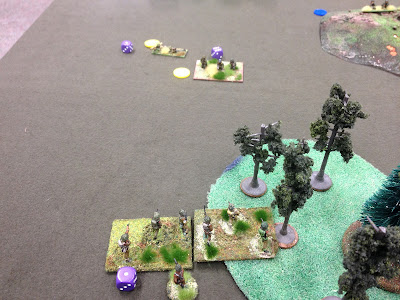 With my morale collapsing I conceded at that point. The British were unlucky with leader casualties, losing two of the five they had on-table outright and another two wounded. I also got very lucky with Chain of Command dice, but this meant my opportunities for activating troops were reduced, giving the Germans plenty of chance to move where they needed with what they needed. That said, I wasn't very aggressive. I'm still finding my way with these rules, and am possibly not as daring with my moves as I could be; I very much allowed the Germans to take the initiative, then couldn't find a way to get them to react to me instead of me reacting to them.

Meanwhile, on the other table, Dave and Peter played big-battle DBA. 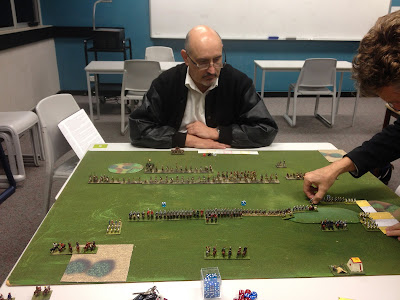 Skythians fought Late Romans (yes, I know ...). The Skythians seemed to have a good night of it, breaking up the Roman army and beating it fairly effectively. 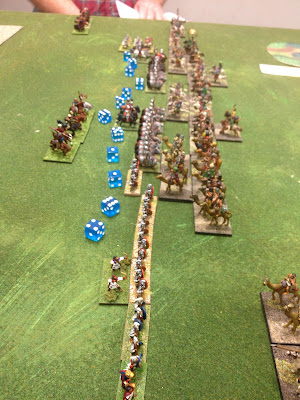