I did the initial knife-work on my Catwoman to Captain UK conversion this morning. There's some tidying up to do, but it's mostly there. 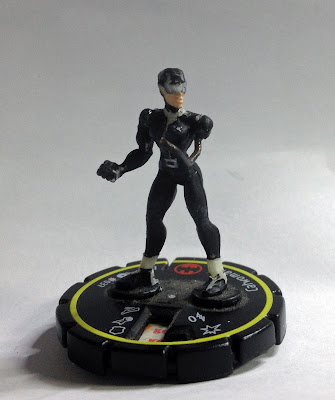 The cuffs around the boots came off more easily than I thought, but there does seem to be a strange undercut at the back of the left leg which I will have to fill with milliput when I make the missing arm. I'm not sure it was already there as part of the figure, or was caused by a slip of the blade.

The arms on this Heroclix figure are both separate pieces (hence the one getting lost), so I took the opportunity to removed the right arm, and then resposition it, bending the hand into a better pose as well.

The next step is to make her a new arm, followed by the mask, hair and cuffs around the gloves.