I was browsing Wargames Downloads again last night and came across a game called 'Brown Water Submarines'. It looked too good to pass up, and for $2 seemed to be a bargain.

I downloaded it, gave it a read through this morning, and set it up to play this evening.

What do you get? Well, it's billed as a boardgame, but the only board is really just a 'dashboard' for your submarine. In this game you take command of one of the pioneering submarines of the American Civil War, on a daring mission to destroy an enemy warship. Each turn you make a couple of simple decisions about the state of your submarines - stay on the surface, light a candle, or close the hatch, for example - then roll on a series of event table to see what happens. Your submarine has to cover a certain (random) distance to the target in order to attack it and obviously has to avoid being sunk by various dangers, or having the crew become so exhausted that the mission is abandoned. Generally anything that makes it easier to get to the target also makes it more likely that you will fail to make it. This is a game for the very lucky and, to be honest, your decisions won't make much of a difference. It's one of those solo games where the narrative you generate is the 'victory'. Actually sinking - even reaching - an enemy ship could be considered a bonus.

Although all you need to play is the dashboard, some markers and a couple of dice, I decided to set up some models for visual reference, and blog photos. They are from my 1/1200th ACW collection.

The large vessel is the USS Hampton, whilst the submarine is a US spar-torpedo boat.

I decided to try the CSS Hunley first, armed with a spar-torpedo. Its target was out in a bay (which adds to the distance the sub has to travel), on a pleasant August evening.

I started my approach on the surface, with a candle lit as I was far enough away from the target for this not to be a danger. 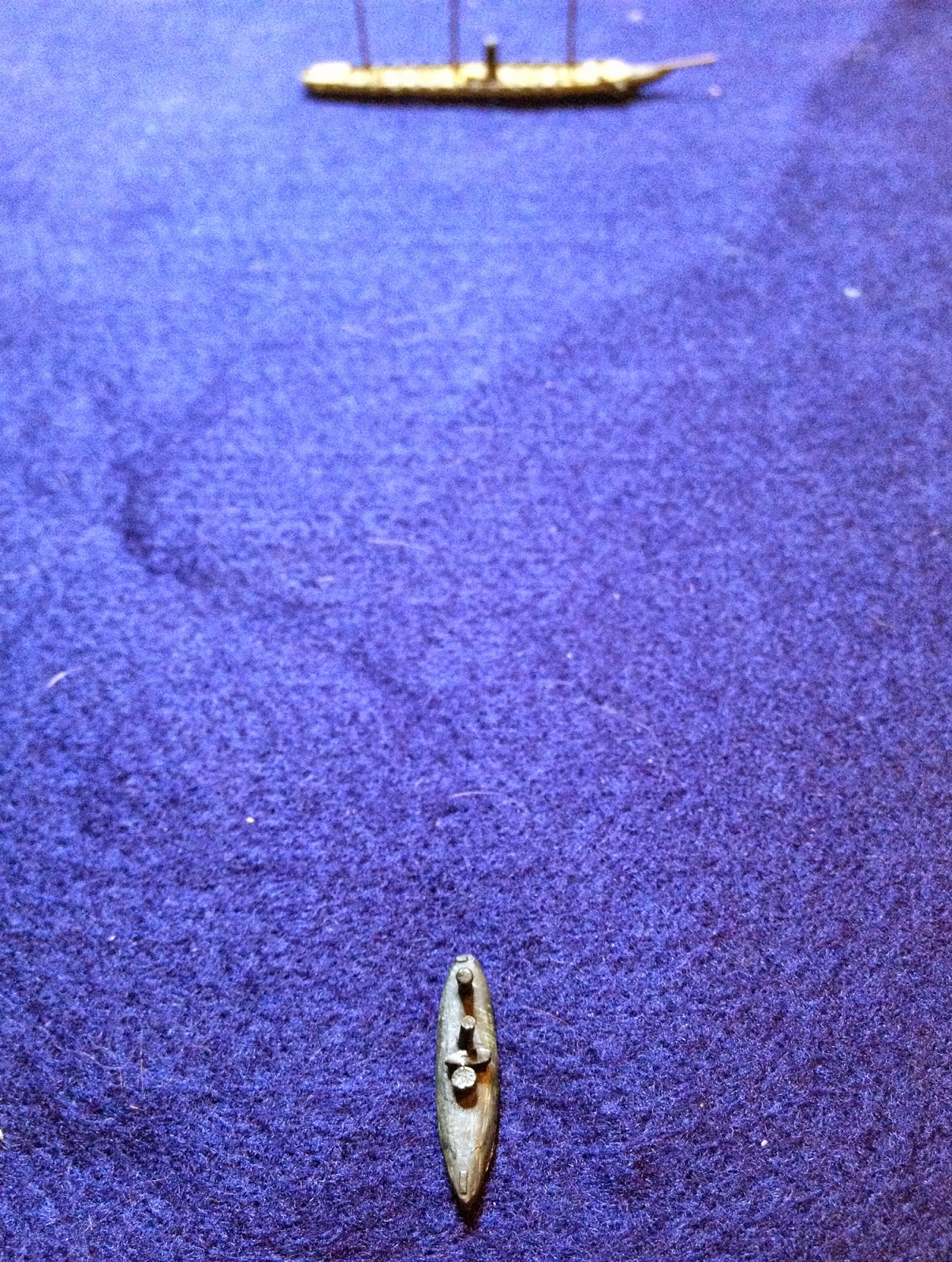 A freak wave hit the Hunley, and it sank. Game over.

I reset the dashboard, and decided to use the same setup for another go. This time I had the Hunley being towed by a tug, which makes the initial approach quicker, albeit more visible and therefore more dangerous. 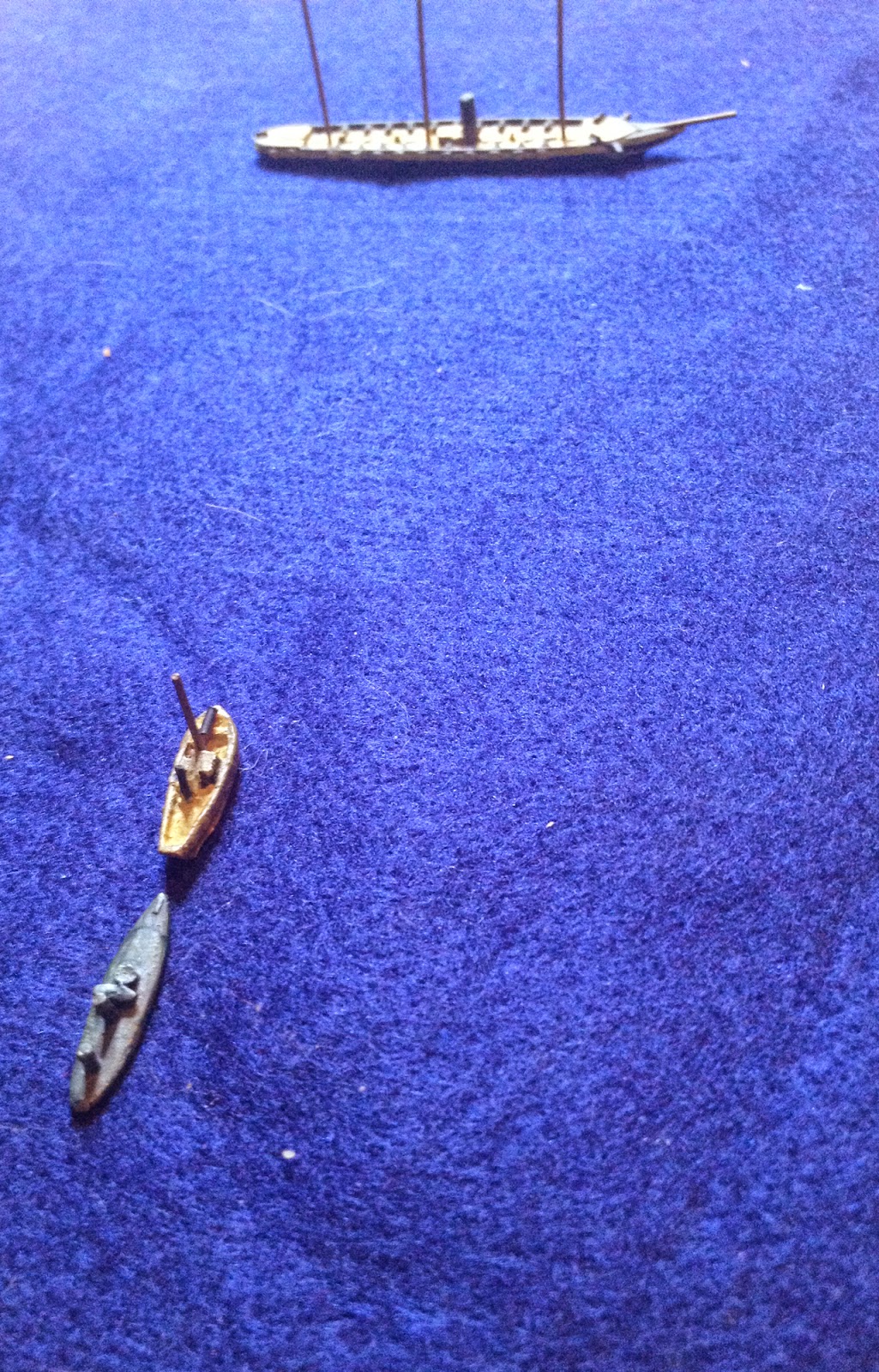 The speed of approach was offset by the crew of the tug losing sight of the target. This meant that we'd have to spend a few turns trying to find it again, with the crew getting more exhausted. However this became irrelevant, as a passing boat hit the sub, damaging it, and another freak wave then sank it, leaving the tug towing an empty cable. 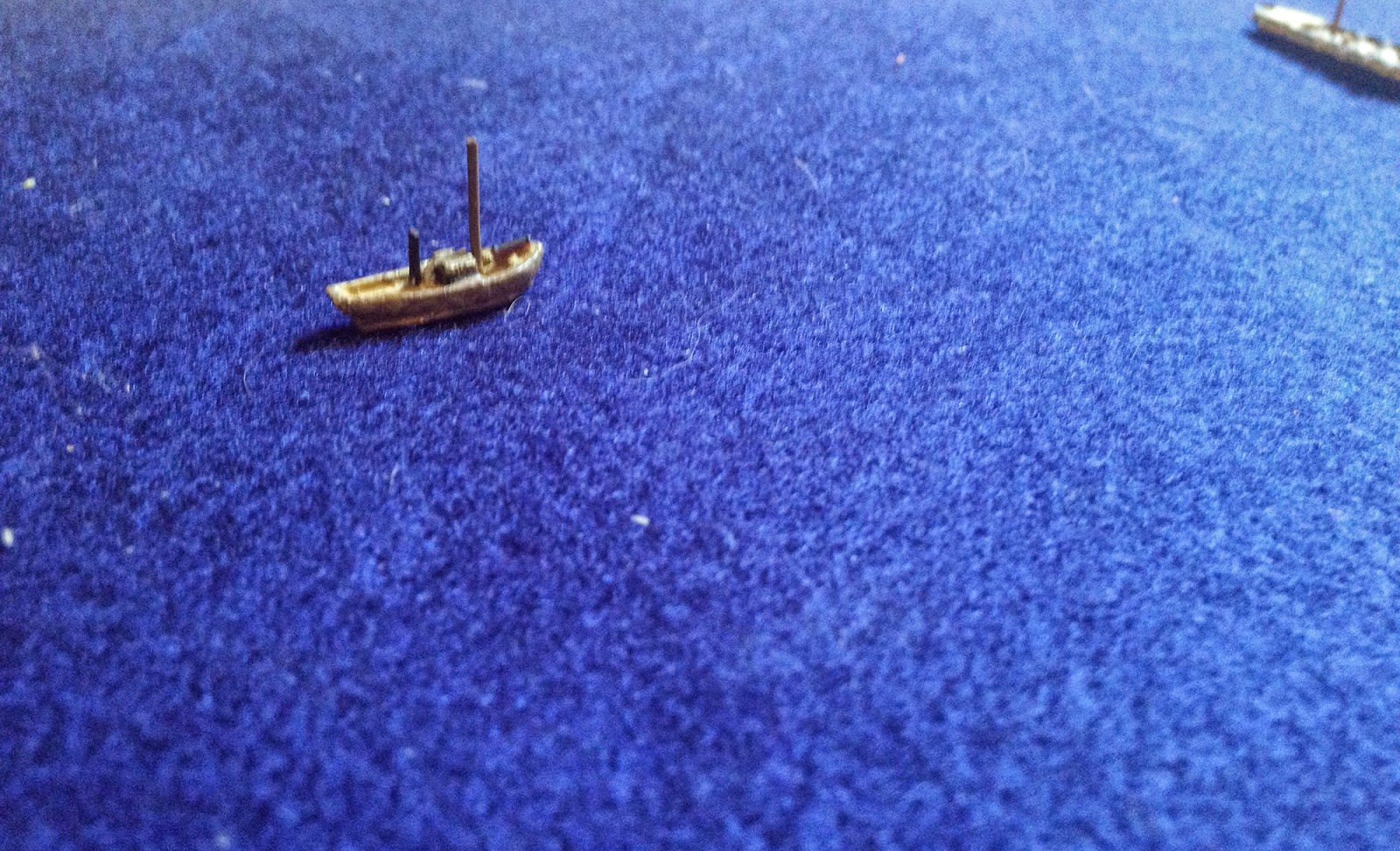 A third run saw the Hunley towed into action again. It was hit and damaged by a passing patrol boat, but otherwise kept going. The tug released the towline, and the Hunley dived. And was never seen again.

A fourth try? Well, if you insist. This time I abandoned the tug, and decided to risk the dangers of being underwater from the start, diving from the off. As it happened I dived too rapidly, hit the bottom, wedged there and damaged the sub's crankshaft. Eventually we worked free, but were then - and I kid you not - attacked by sharks. This caused enough damage to the sub that the crew called it a night and headed for home.

I'm not sure about the shark attack, but the effect could equally be 'Sub hits obstacle'. That's it. We hit an obstacle, and were too damaged to continue. No sharks at all.

I decided to have one last go with the Hunley. Again I dived early, remembering to keep the candle lit after realising that it's only really a liability if you're close to the target. As we dived water leaked in from the buoyancy tanks, and we spent a ridiculous amount of time on the bottom of the bay pumping it out. Moving off, the Hunley jammed on the bottom, and was delayed some more. Finally the crew gave up after not being attacked by sharks again.

I decided that this mission was futile, and gave up on the Hunley as well. For my next adventure I selected a David. This is also armed with a spar-torpedo, and is very fast, but it can't dive.

An attack on an enemy ship in a harbour was more to my liking; I had a fast vessel and little ground to cover. What could go wrong? Well, initially, nothing. Then I was hit by a freak wave. And sunk.

I called it a night at that point.

I actually enjoyed these frustrating missions, given that the results were not unlike what happened in real life.. As for the game, I felt it was worth the $2 sale price, but certainly not the $7.50 original price, for which I can get a downloadable boardgame with as much in the way of rules, plus counters and a map. The rules themselves are OK, but one or two bits aren't entirely clear - it's possible to accrue 0 fatigue, for example, but the table implies that you can't. It also has two modifiers which seem to be the same thing, but which I suspect aren't; I think there's a condition missing from one of them. I would certainly apply a couple of house-rules the next time I play this.

If you like ACW naval, and have always wanted to simulate the submarine missions of that war, then for the money this game is a great place to start. And if you haven't read up on submarine warfare of ACW then you should - 'Union and Confederate Submarine Warfare in the Civil War' by Mark K. Ragan is a great, and comprehensive read, covering just about every shred of information there is to be found on the subject.
Posted by Kaptain Kobold at 21:13