Return Of The Brown Water Submarines 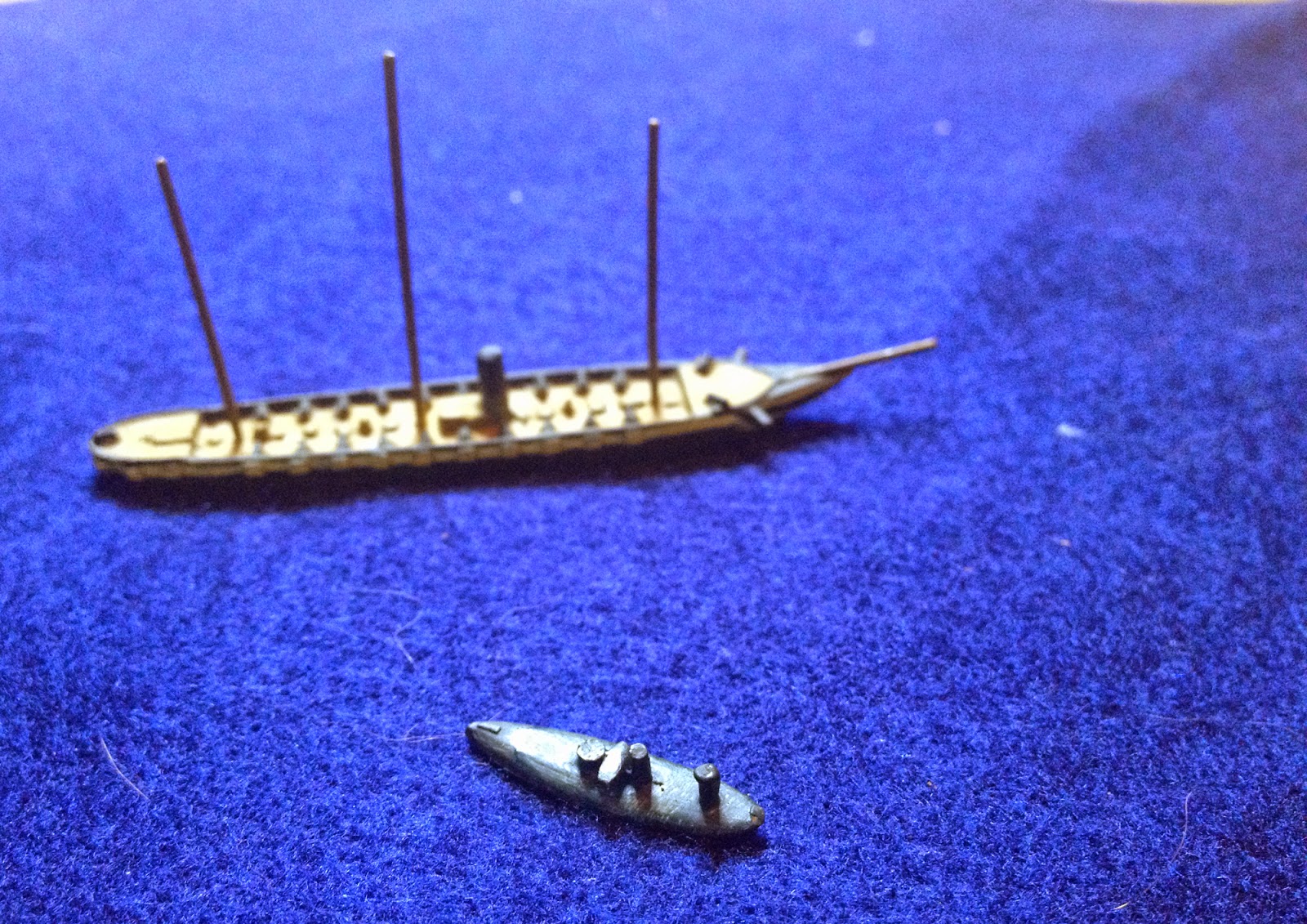 Despite the frustrations, I enjoyed my ACW submarine games yesterday. However I do like to tinker with games, and I felt that one or two aspects could either be streamlined, or turned into their own subsections. At lunchtime today I jotted down some notes on these changes, and gave them a try when I got home from work this evening.

I have incorporated all states and events that make the submarine easier to spot into an end of turn spotting roll. This could cause the target to flee, but the sub gets a chance to find a new one. In addition I have got rid of the idea of events causing a delay of so many fixed turns, as for most of them the accumulated fatigue over that time will pretty much end the mission. Instead I have added the concept of the sub being immobilised, but being allowed to roll to move off again. This makes things risky, but shouldn't delay it for so long. I have also worked out some proper rules for getting the submarine home, as the original game glosses over this a bit. I thought that since so many missions end with the crew aborting, it would be worth seeing if they make it back after that.

My first run of the tweaked game saw the CSS Hunley attacking a target out in a bay. With hindsight the distance to the target was so great that the sub was onto a loser from the start, but ...

From the off the mission went badly, with the Hunley's crank jamming. The crew managed to repair it, but after a short distance it jammed again. Whilst repairing it for a second time they realised that they had drifted off course, and had to steer the vessel back on line with the target. As they got nearer, they decided to dive, which caused the pumps to break down. By the time they were repaired, the Hunley's crew had lost sight of the target again, and were now too exhausted to continue, so turned for home. Deciding that being on the surface would be quicker, the sub rose again, and once again the pump broke down. The Hunley wended its way back to port through increasingly choppy water, and the exhausted crew just about reached safety. There would be a lot of inspection of the vessel to determine why things kept breaking down before it would be sent out again.

A second mission saw the Hunley on a river, with not only a shorter distance to the target, but a decent current to help it get there. Unfortunately the current took the Hunley off course, costing it time, then the target spotted its lit candle, upped anchor and sailed off. With no other target available the Hunley turned for home - now going against the current. And with a crank that jammed. Again. As the crew worked to repair it, a freak wave sent the submarine to the bottom of the river. Game over.

I felt my tinkering held up well, despite adding two more failures to my list. I did realise that I'd played the earlier games incorrectly, though, having the freak storm automatically sink the submarine, when it should have been based on a die roll. I can't believe I missed that.