The Age of Reason

Last night we had a Maurice Evening at the club, with three games running side by side and a few new players taking part. In a way we covered the whole of the Maurice period. On the first table Caesar and John played an ImagiNations game, but with one of the armies based on Revolutionary French tactics. In the middle we had a refight of the Kolin scenario from the rules, with Prussians and Austrians from the middle of the period. And Dave and I went right back to the start of the Maurice era, using my Great Northern War Swedes and Russians.

This report will focus on the latter game, because obviously that's the one I was concentrating on. We used the setup straight out of the rules, and 100 point armies.

This gives the Russians a slight edge in numbers, plus some high quality infantry. The Swedes are geared up for an aggressive attack. Both armies also had Pikes, which reduces the shooting effectiveness of their infantry, but increases their close combat capability - if they attack.

Dave took the Swedes, and ended up attacking the Russians on the plains. We both opted for minimal terrain, so had an exceptionally open field. A small village in the Russian deployment zone was the objective. As the attackers the Swedes gained an additional Trained infantry unit. 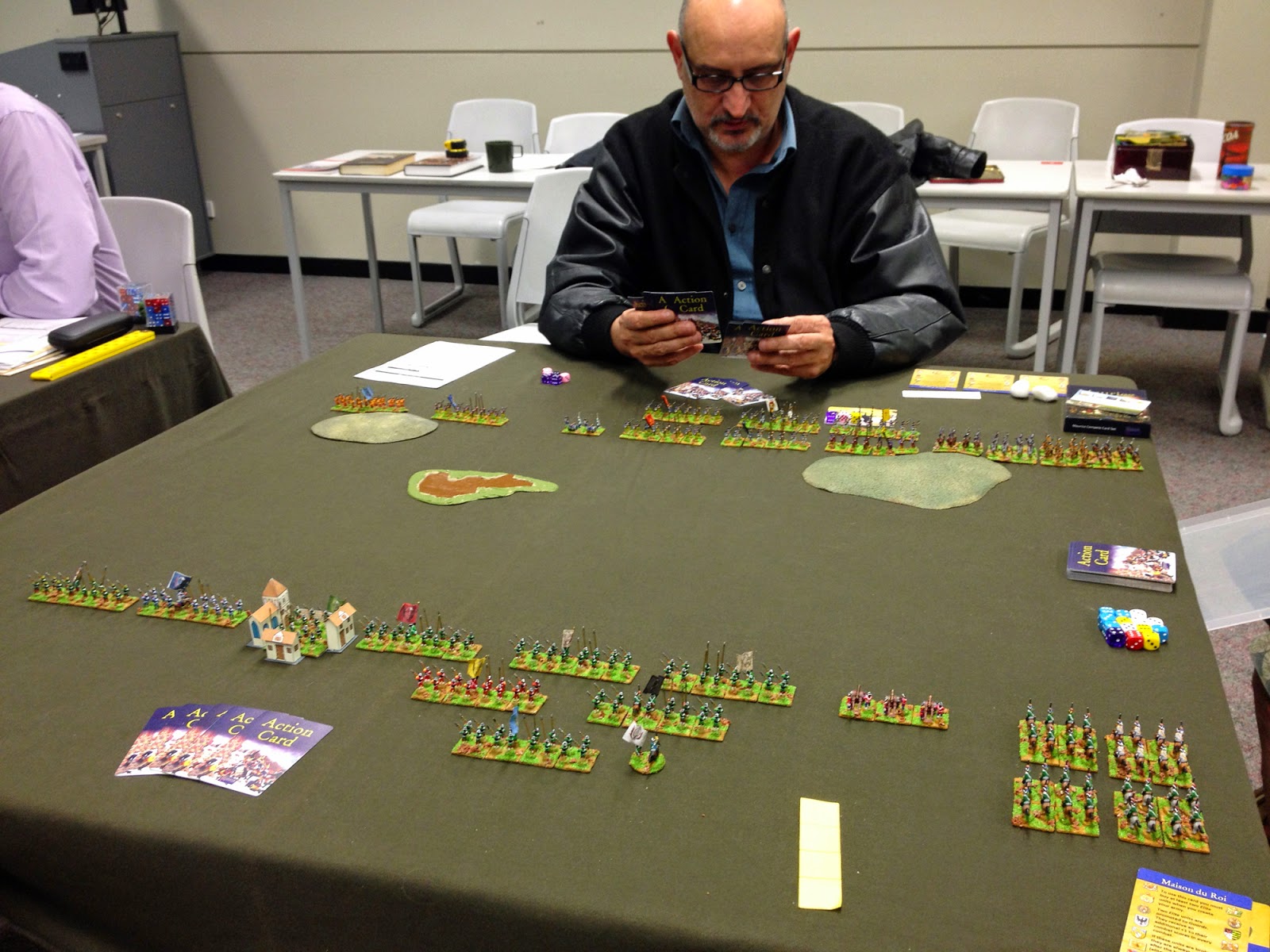 The Russian cavalry, with the artillery and infantry beyond it. 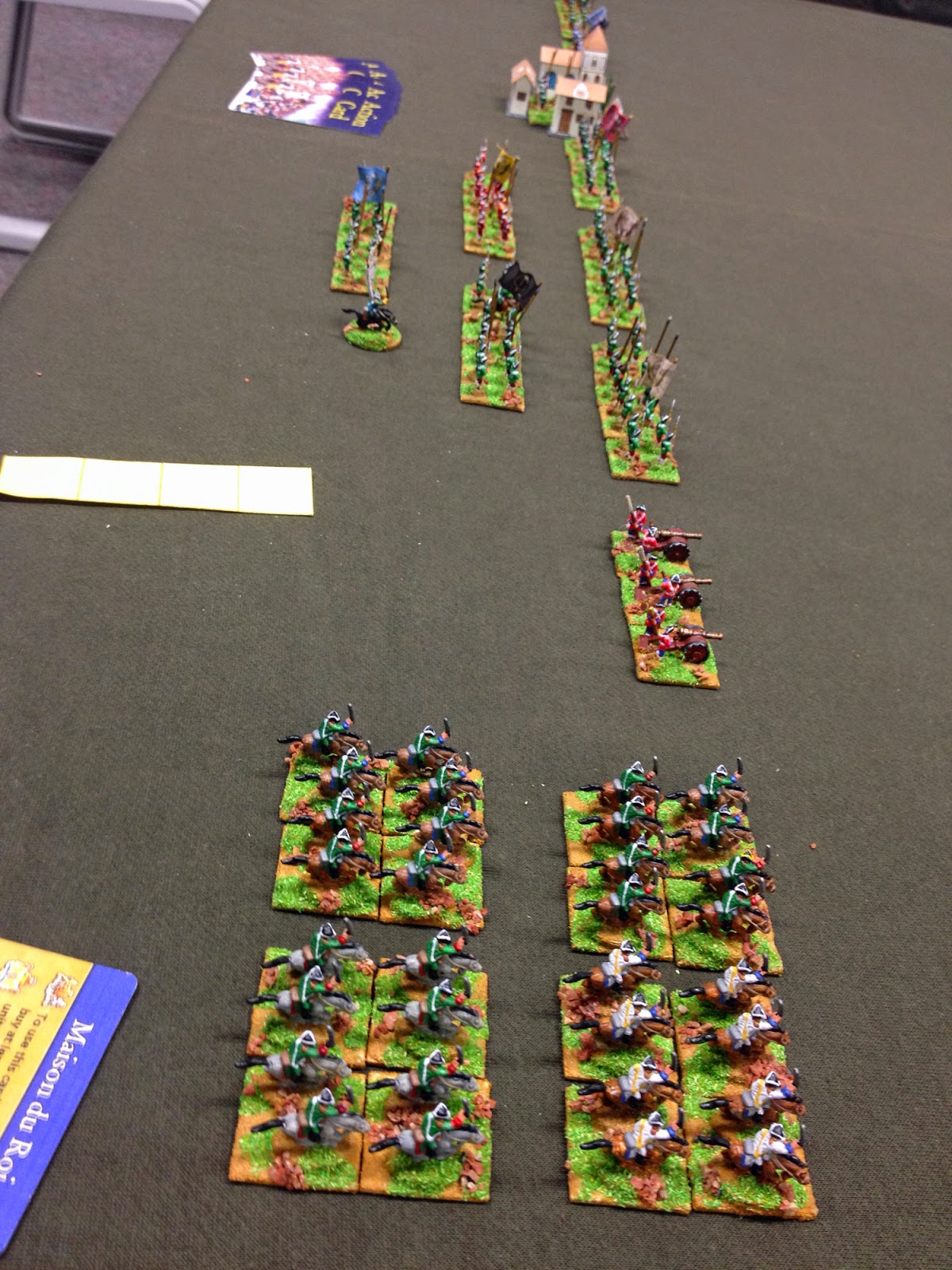 The Swedes, ready for the attack. 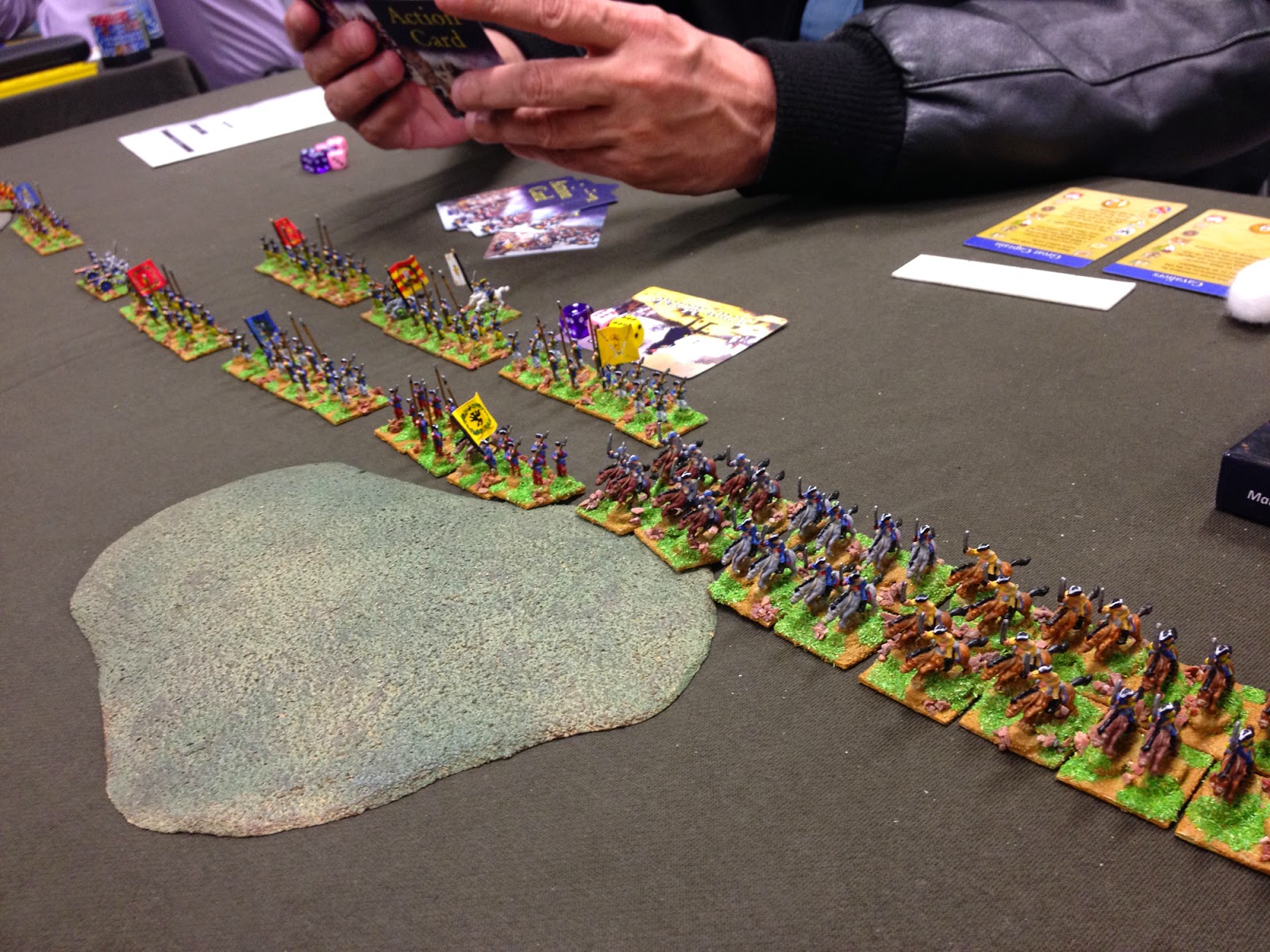 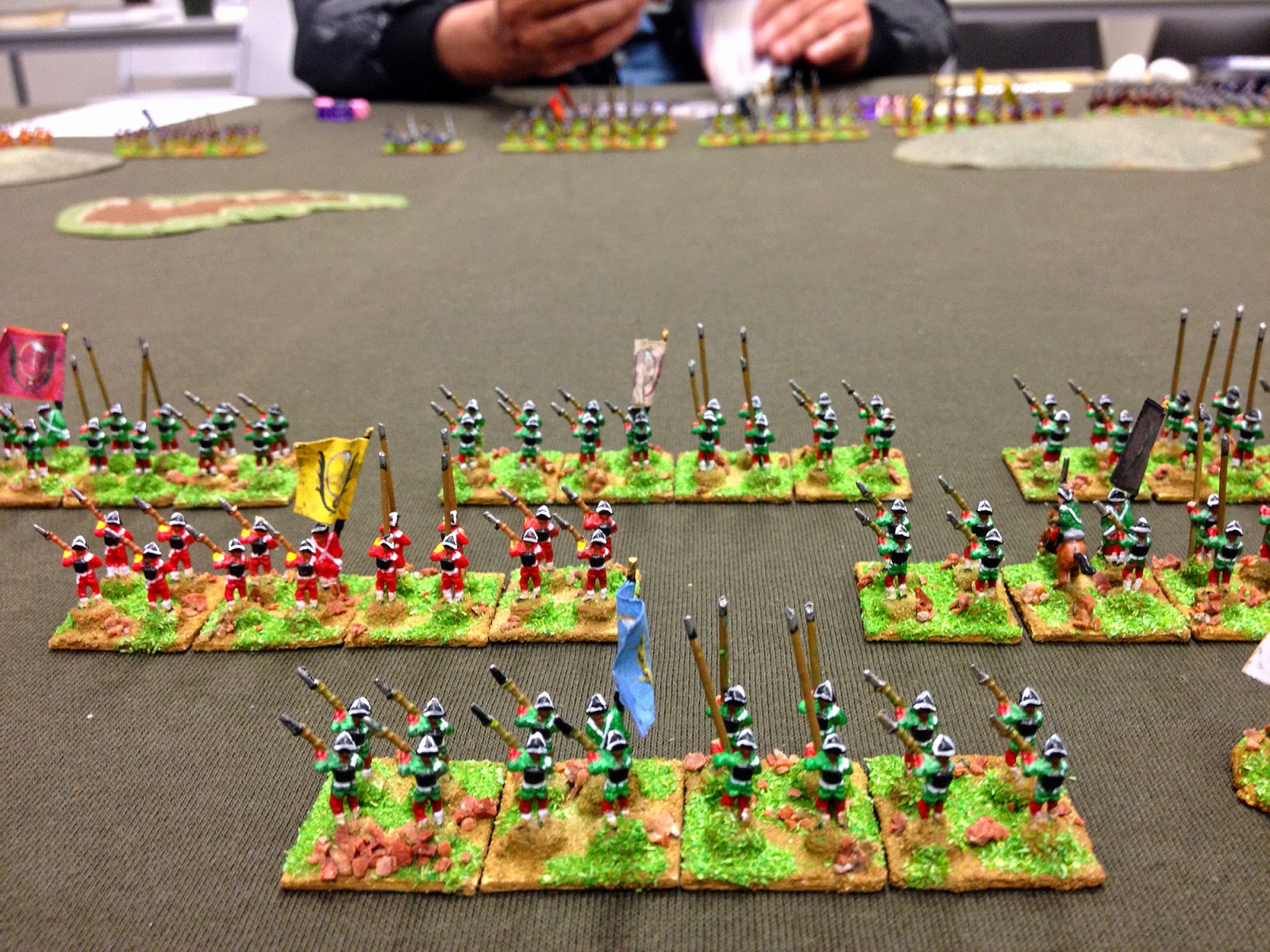 I garrisoned the village, but with hindsight this was an error; one of the armies was likely to break long before it could effectively be attacked. 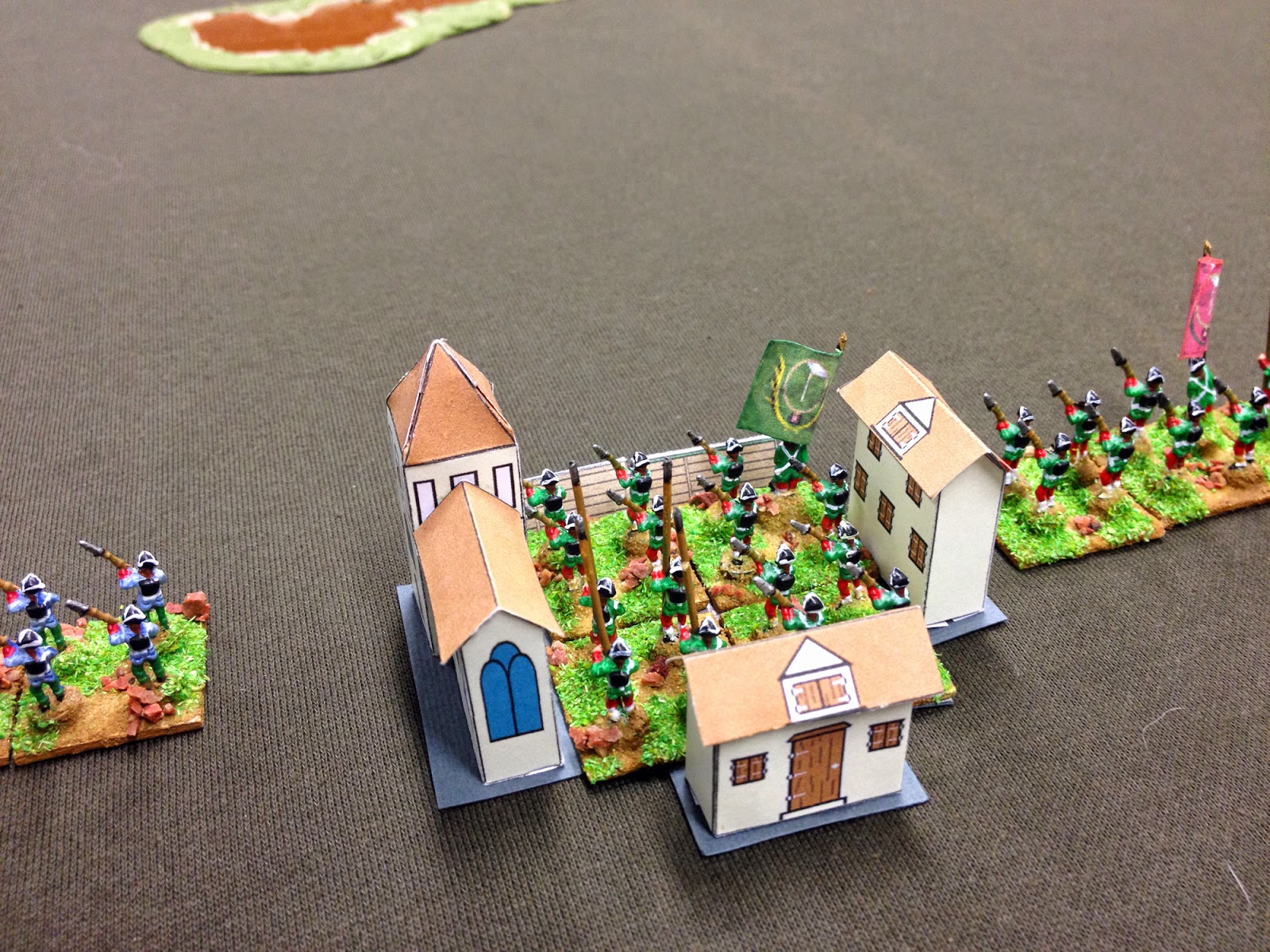 Dave moved his whole army forward, whilst I bombarded with my artillery. I was collecting useful cards, and wanted to see where he would make his main attack before using one of the cunning plans I had settled upon.

It looked like a cavalry attack was his main thrust, but they found their line of advance was boggier than they'd originally been told it was. 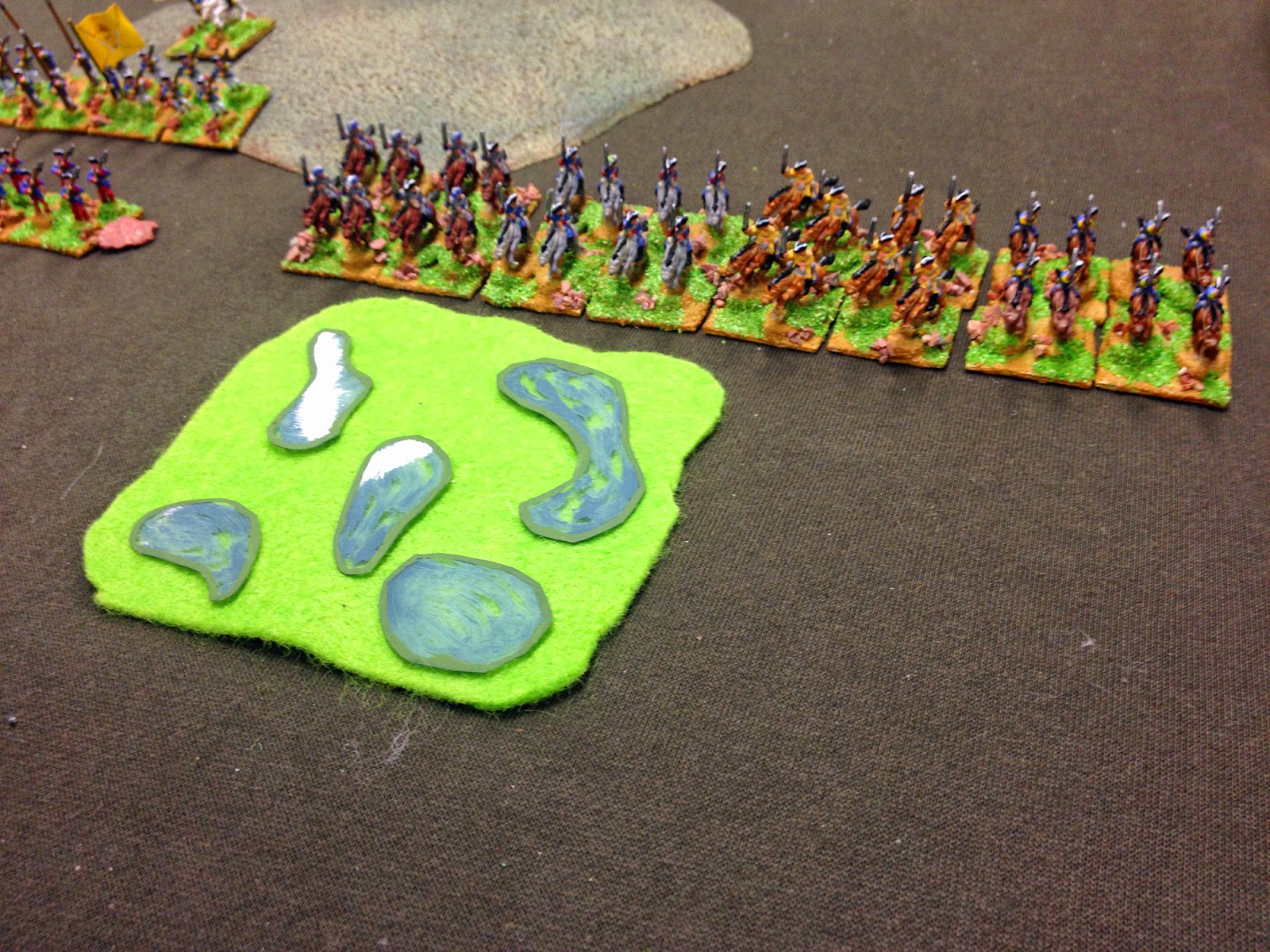 As his cavalry emerged from the marsh I counter-attacked, using Stirrups In cards to offset his Cavaliers advantage 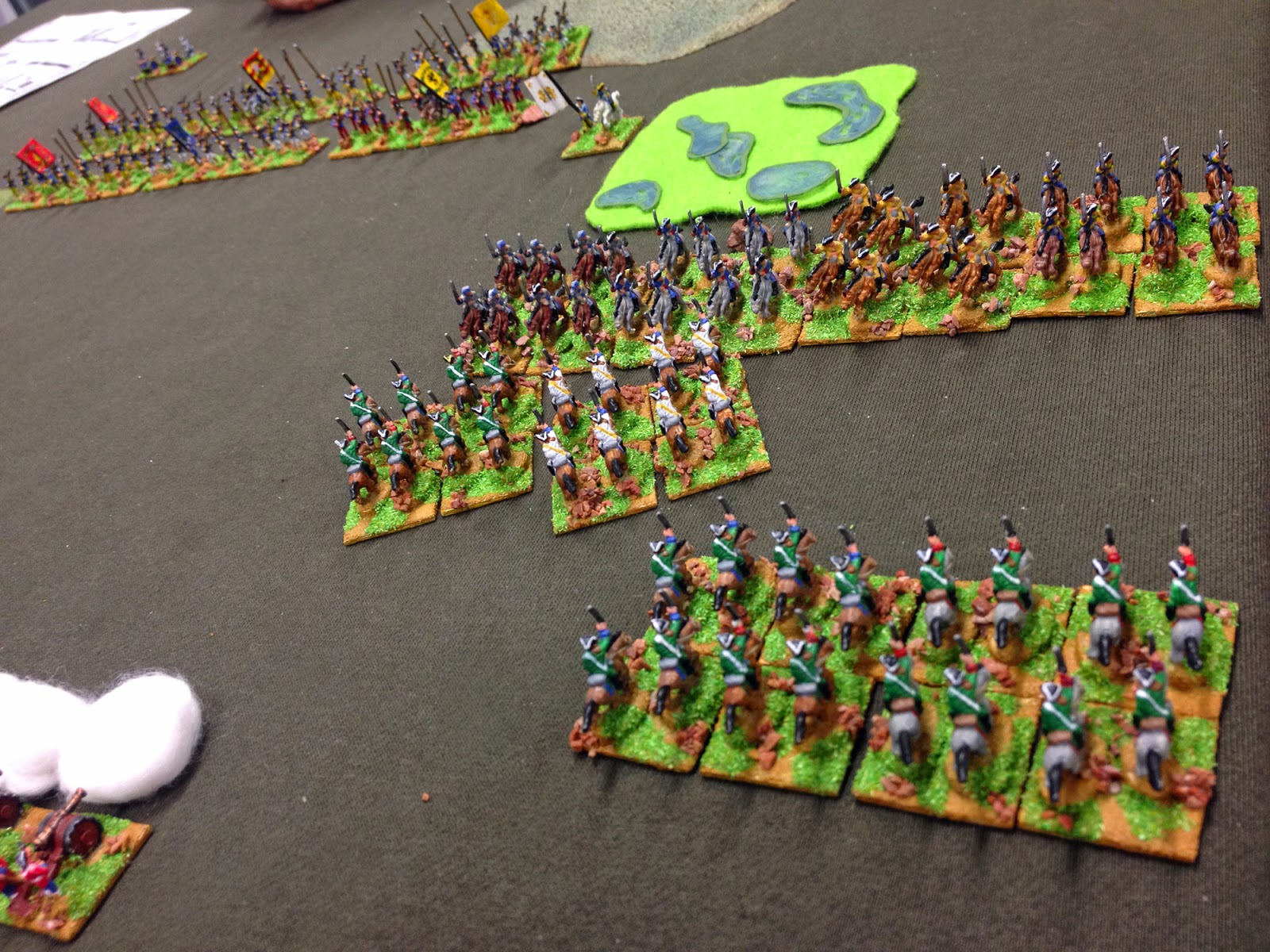 The melee went back and forth, and he was soon two units down. But my cards ran out, and the two surviving Swedish units attacked, and kept attacking. 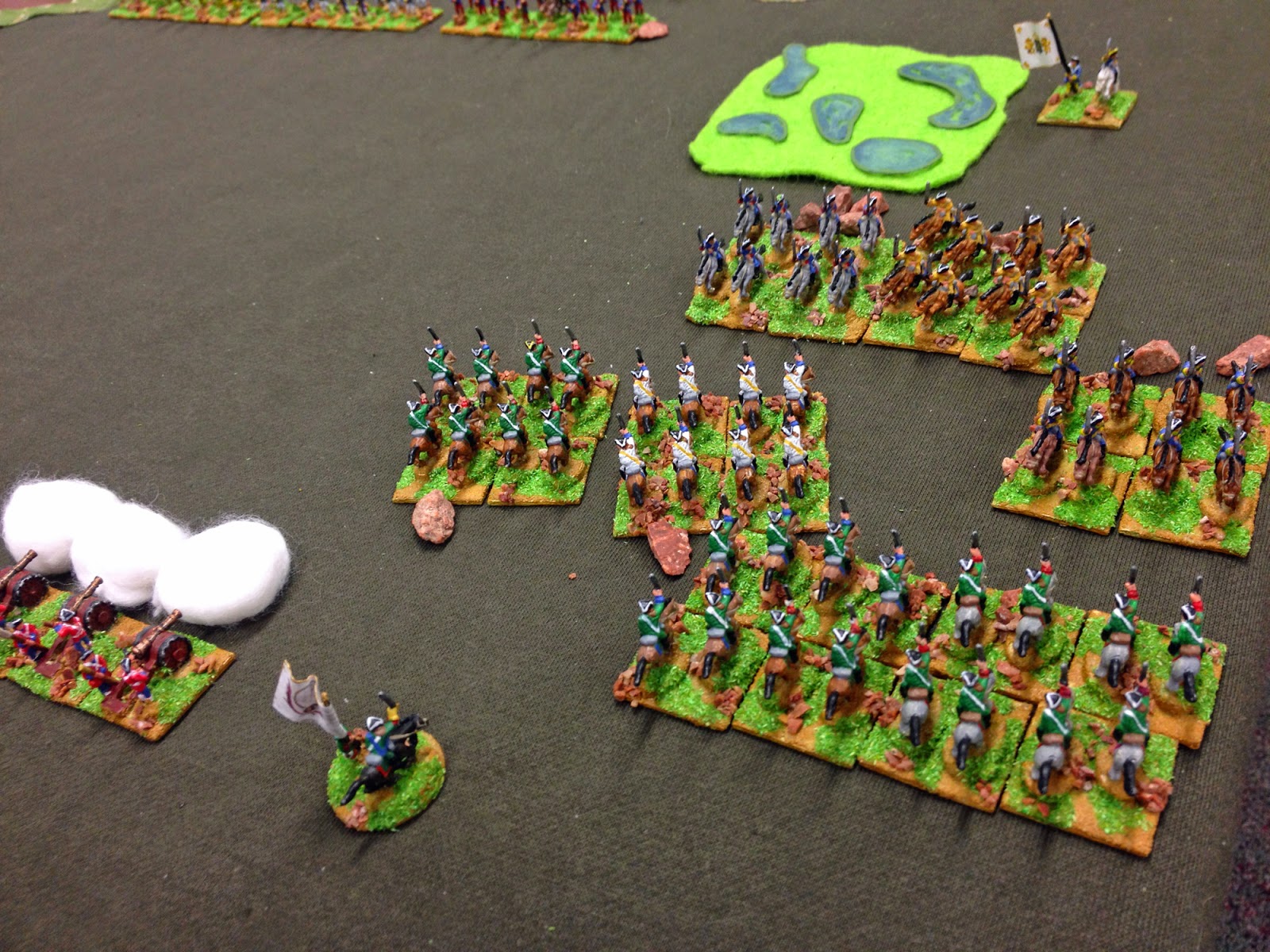 I switched to the other flank, and pushed the Guards forward, engaging a pair of Swedish infantry units. 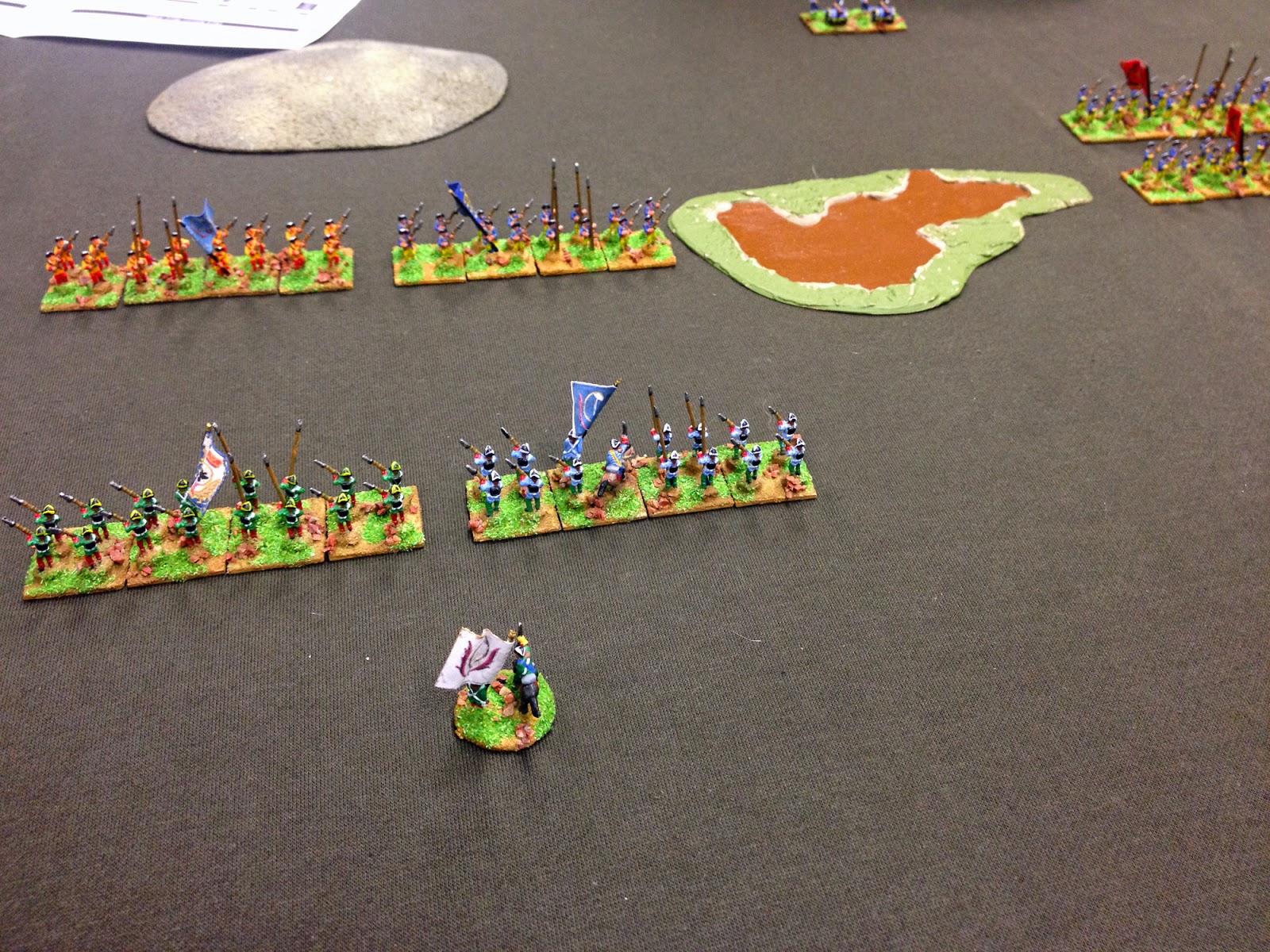 The Guards prevailed; one Swedish unit was pretty much destroyed by musketry, which takes some doing when you consider the units have reduced factors through being pike-armed. 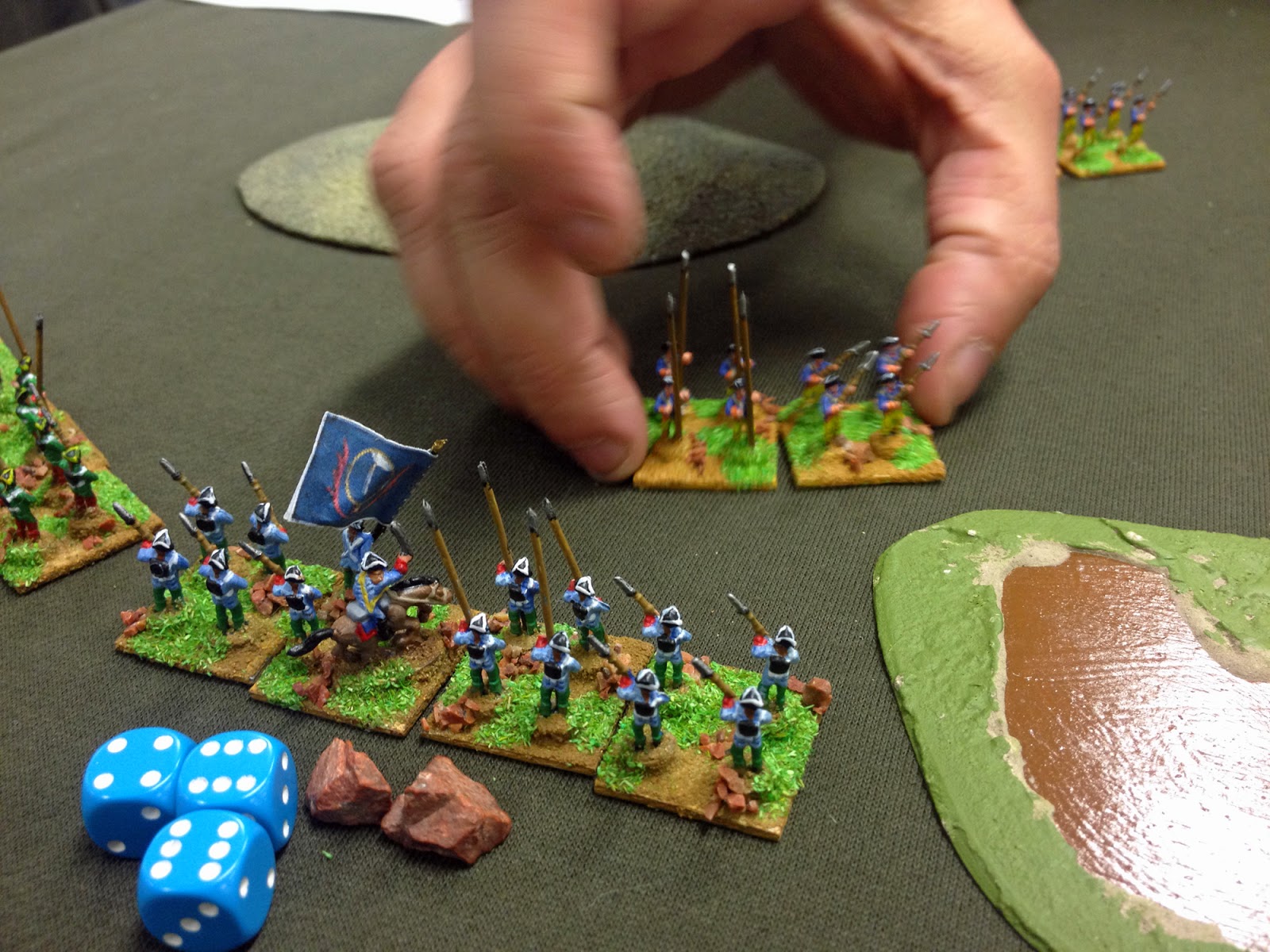 Meanwhile the Swedish cavalry, having finished off their Russian opposite numbers, destroyed the Russian artillery as well. 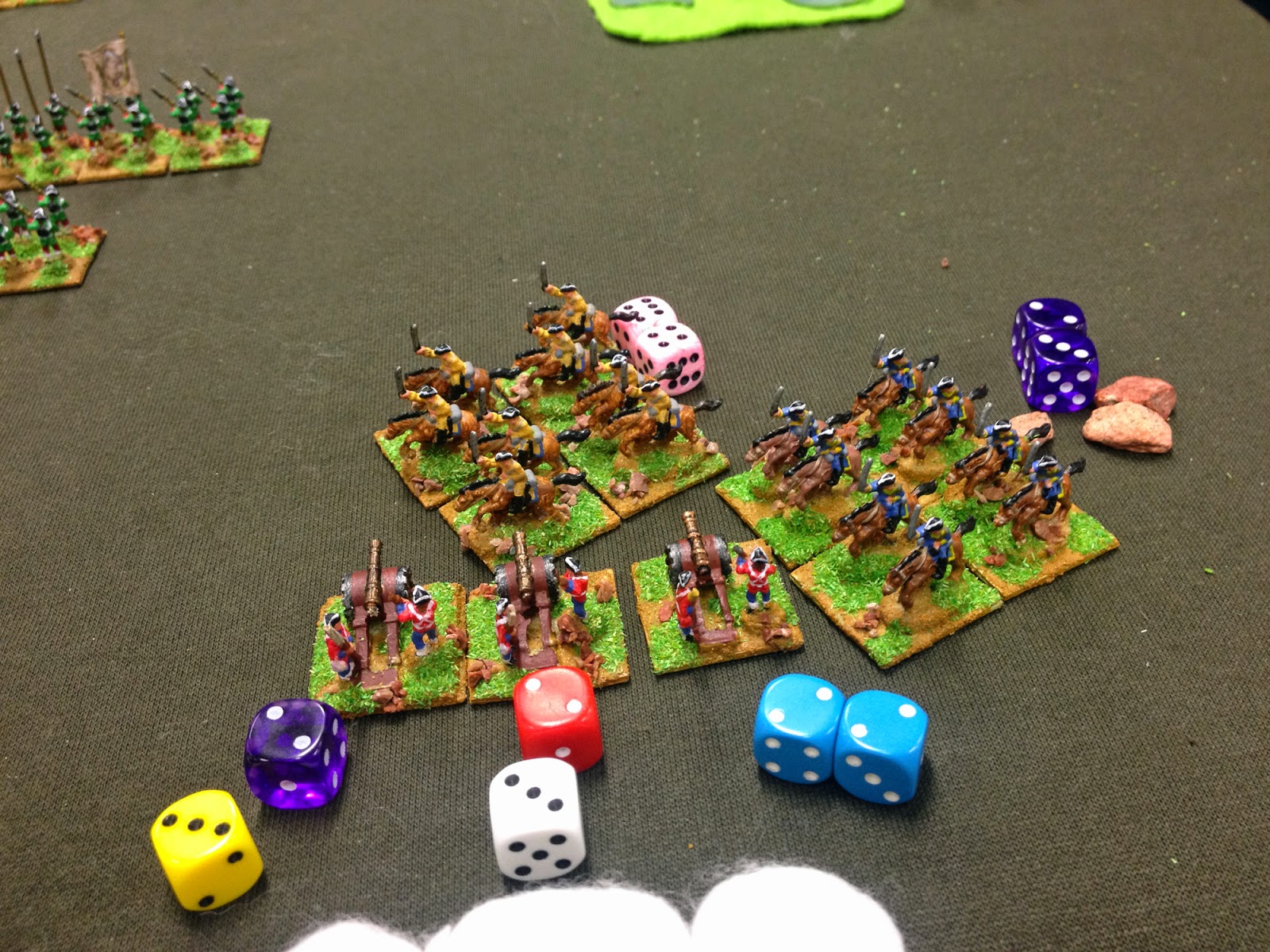 With their right flank threatened, now was a good time to advance the main Russian infantry force. 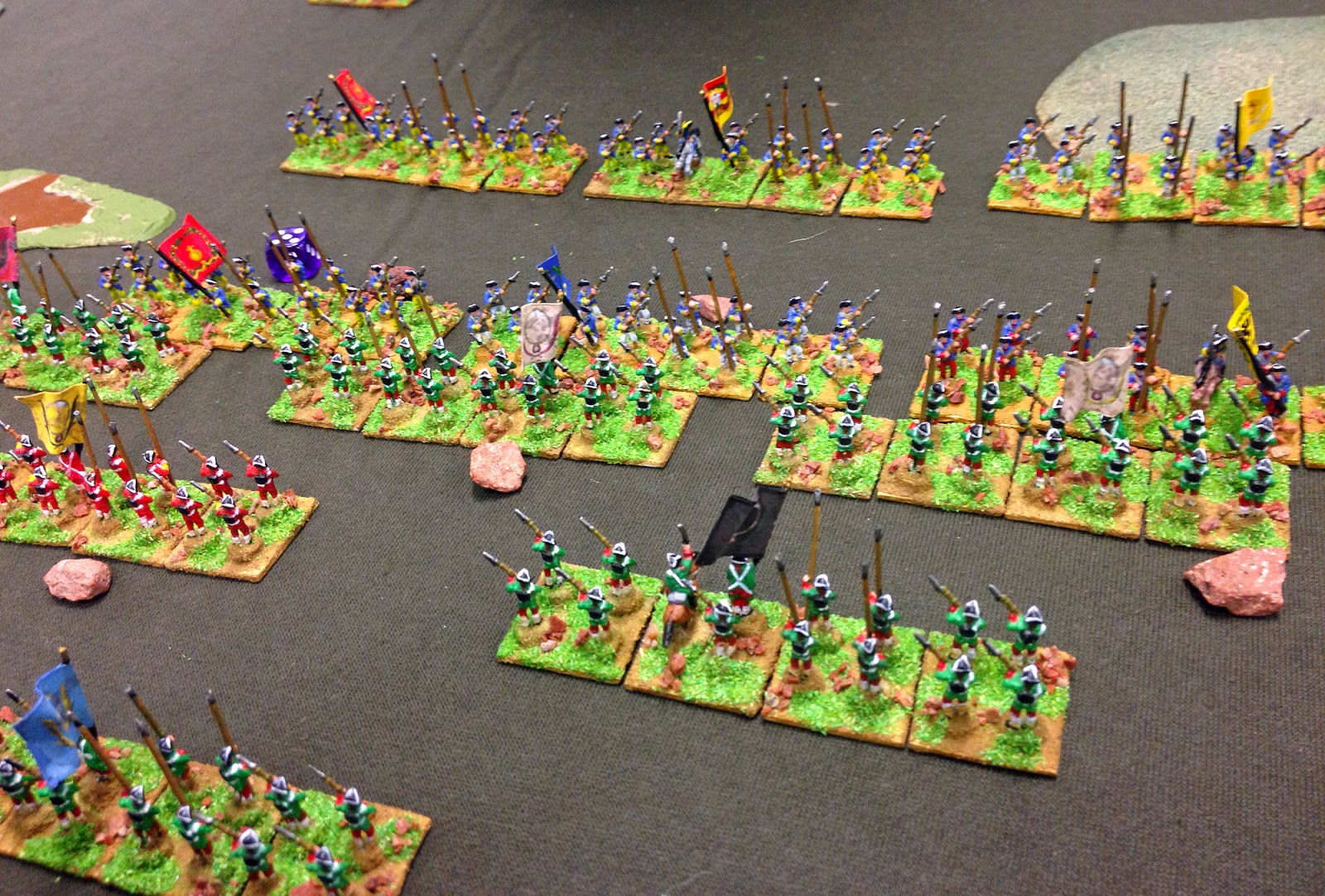 A volley of muskets at close range, then charge! 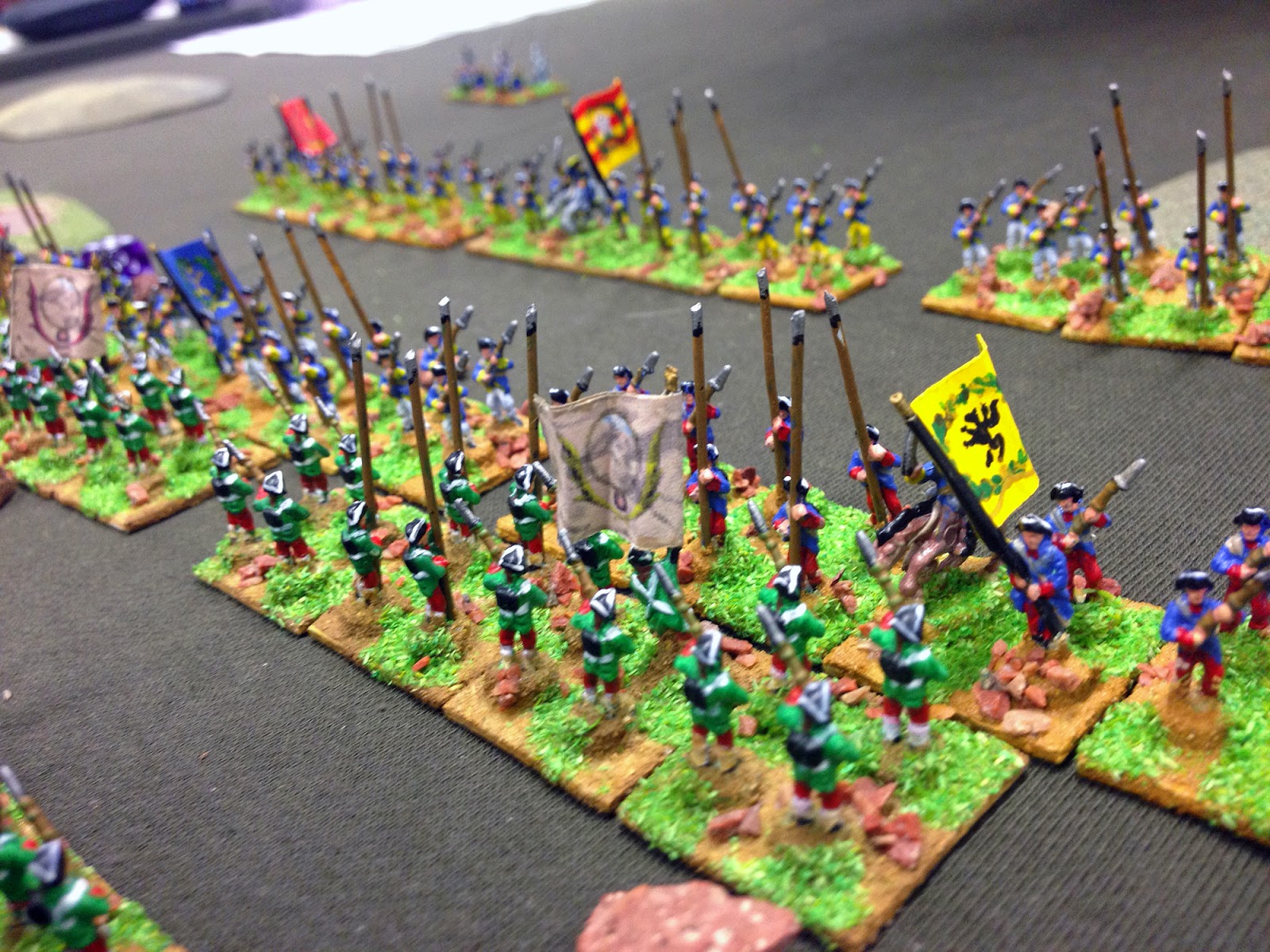 The Swedes suffered casualties from the Russian attack, but then so did the Russians, as the Swedish counter-attack was very effective indeed. Russian morale collapsed at this point, although the Swedes were only a couple of units away from breaking as well. 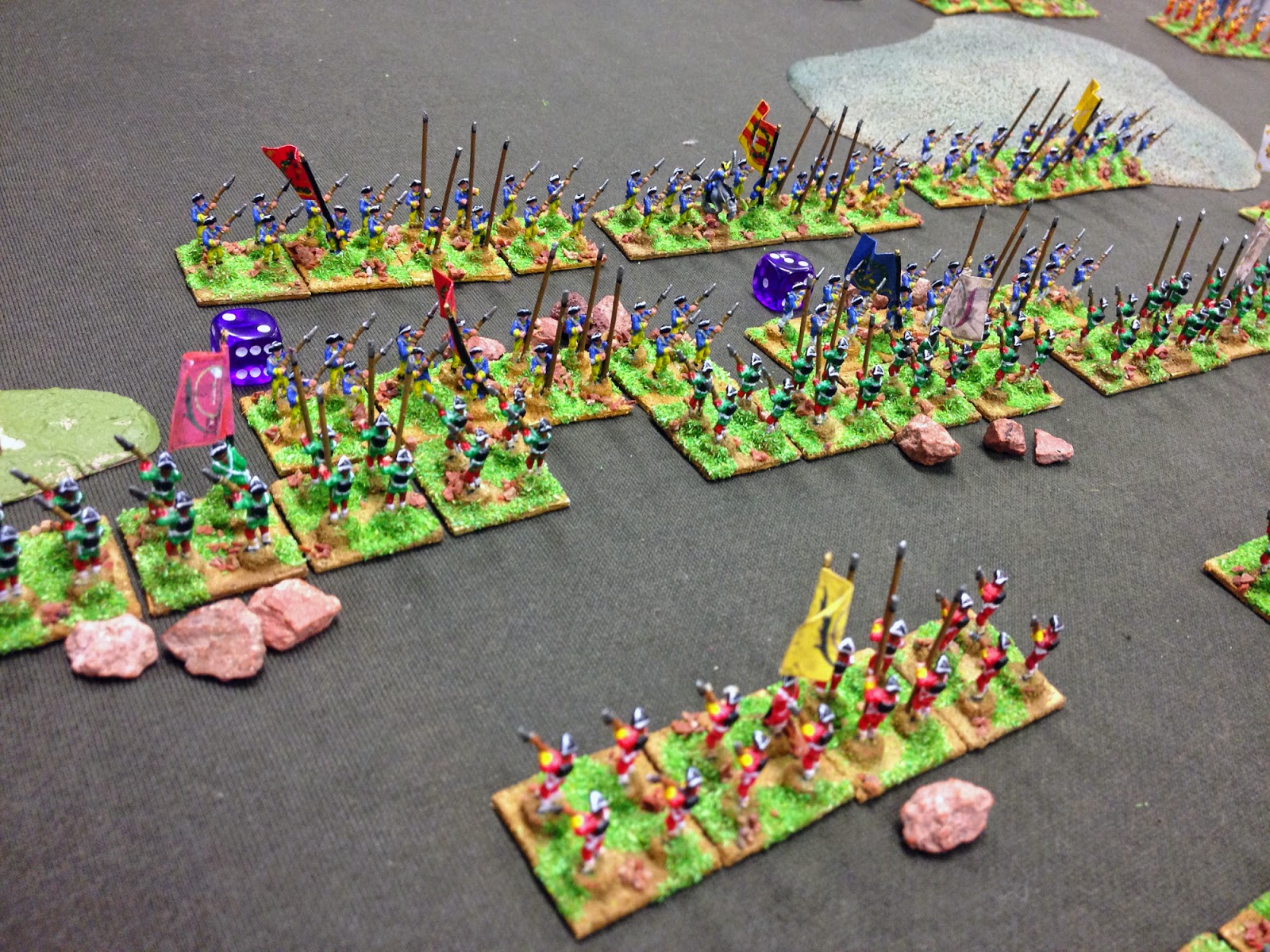 It was an interesting game. The fact that the Swedes have an advantage in attacking in close combat means that there's an incentive for the Russians to attack them first in order to try and negate it. The pikes help with this, giving a +1 to a unit that's charging. The pikes also reduce the effectiveness of the Maurice firefight; close combat really is your best tactic with these armies.

Dave used his Great Captain advantage well, moving his general around to shift the focus of the battle, or keep him in a position where he could easily control two or more sections of the army.

We did play one bit wrong, in that we didn't give units which destroyed their opponent in close combat a disruption marker. This was what enabled Dave's cavalry to ride over everything in its path at one point. In fact it should have been slowly disintegrating, and having to rally before each attack, which would have bought my final infantry attack more time.

On the centre table Peter and Mark played the Kolin scenario from the book, umpired by Ralph. I think Pete's Austrians saw off the Prussians. 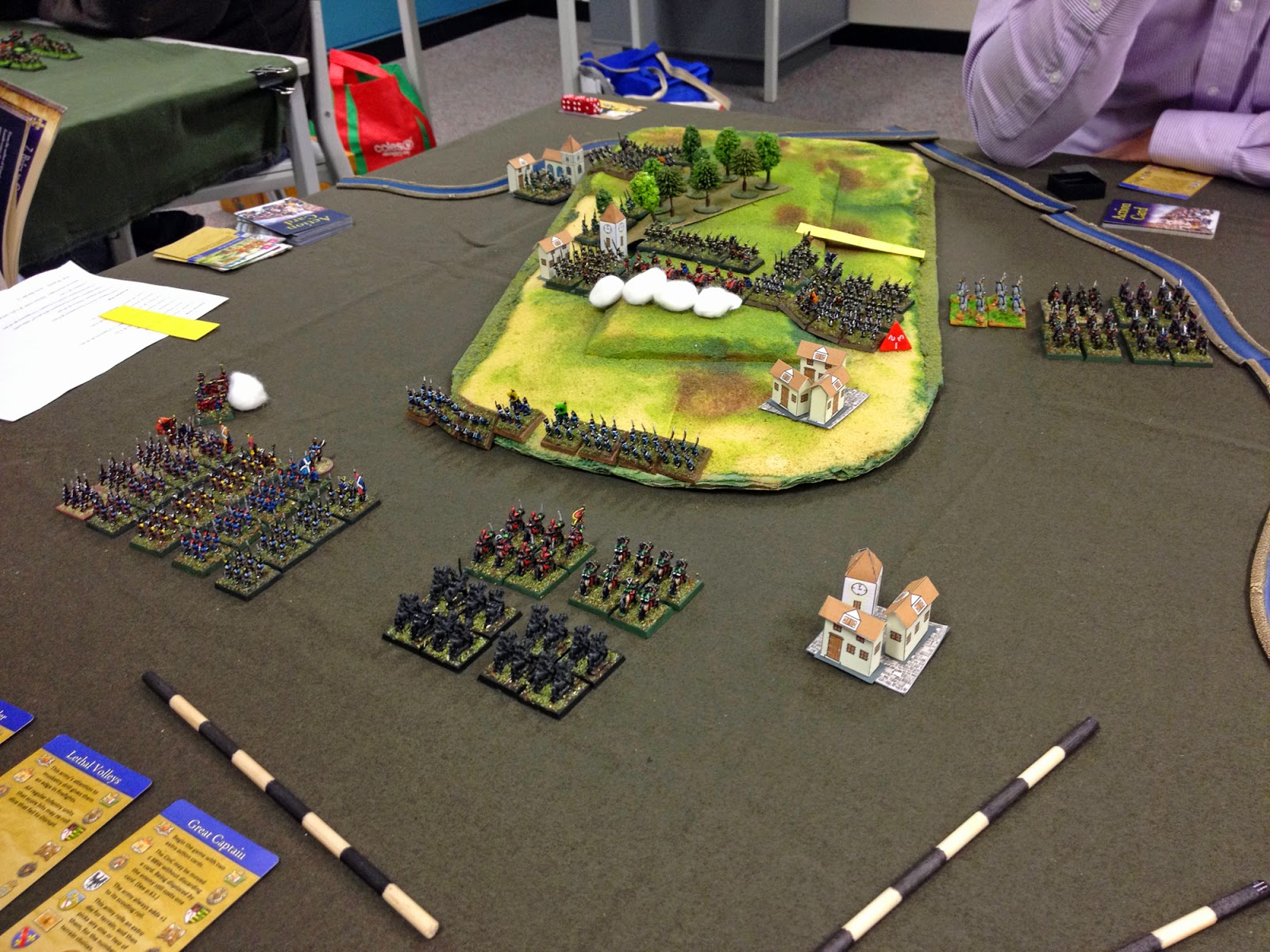 Finally on the third table Caesar and John's ImagiNations fought it out. Caesar advanced in columns with a screen of skirmishers, whilst John relied on Clerics and superior firepower. I think John's cavalry won the day, knocking out Caesar's flank and pushing his morale to the shaky stage where a few infantry casualties routed the army. 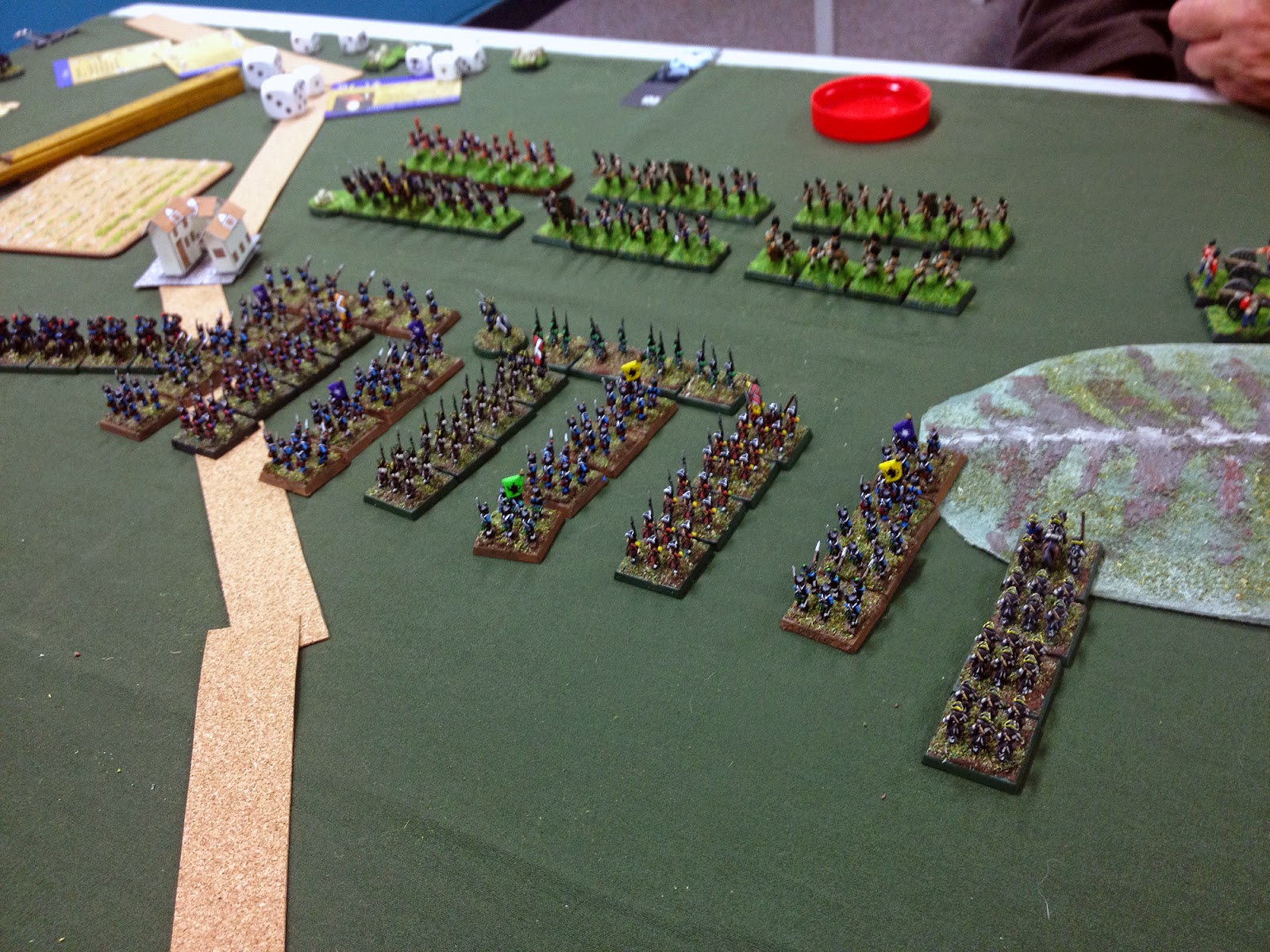 Caesar's artillery, next to one of my paper villages. 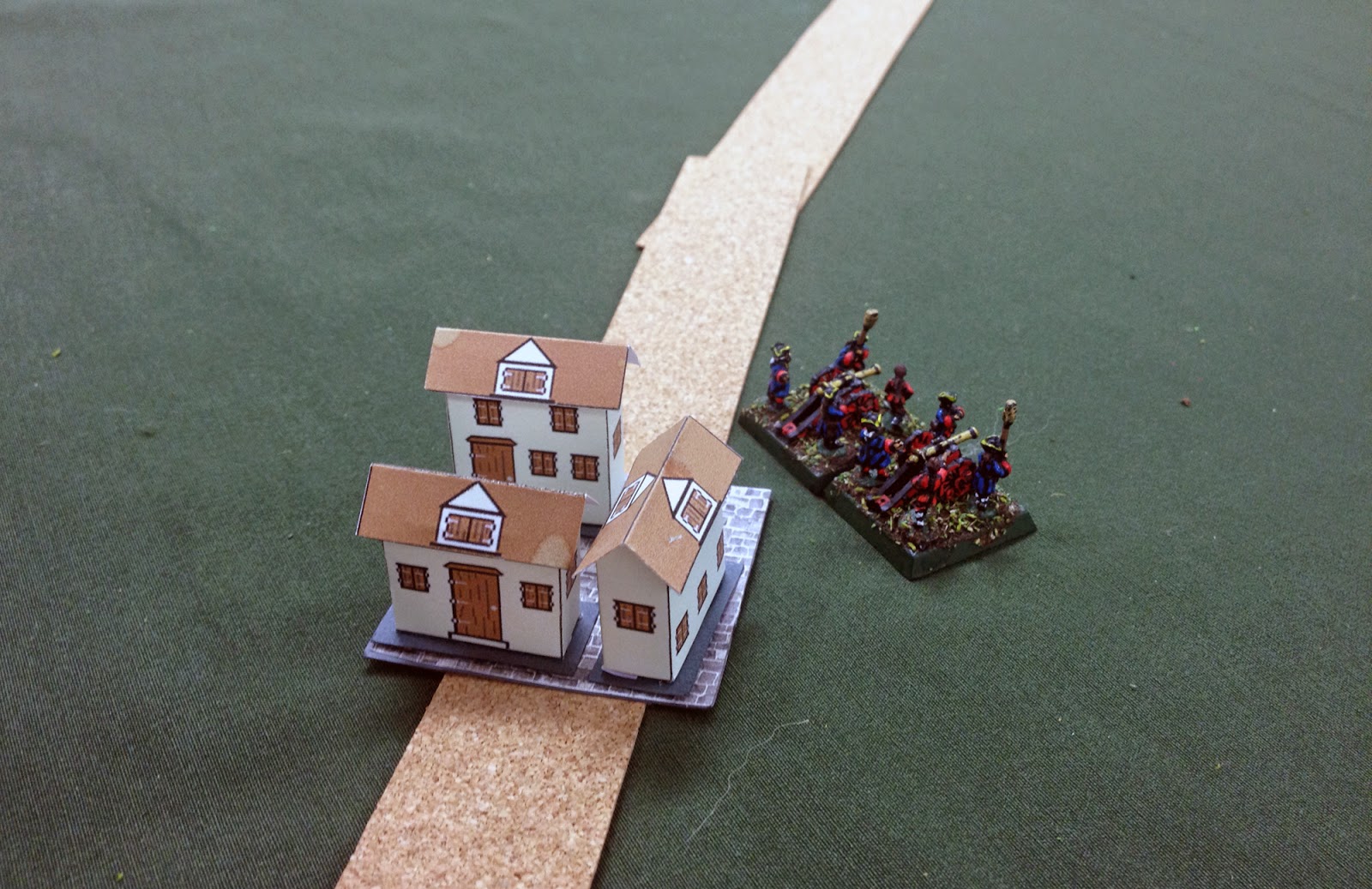 Everyone seemed to enjoy their games, and it sounds like they were keen to give it another go. I certainly want to try out my Great Northern War armies again, and having seen Caesar's in action I'd love to try some Irregular troops as well.
Posted by Kaptain Kobold at 21:37