We're planning on a double-sized Maurice game next week, but it's been a while since we played, so we set up a smaller game tonight so that we could remind ourselves of the rules. And, more importantly, how to play, as there's a knack to Maurice card-play that we'd still not got to grips with.

Ralph concocted a scenario for Boxtel, Wellington's first encounter with the French, when he was a mere brigade senior officer. It's a little outside of the period covered by Maurice, but allowed us to try massed columns and make use of Ralph and Dave's nice 15mm Napoleonic figures. It's also the first time we have played an actual battle using these rules.

Both sides had a Notable - the British had Wellington, the French a Revolutionary fanatic whose name escapes me. The British had two brigades of infantry, one of cavalry and some artillery. the French had much the same, but had more infantry of a generally lower quality but the Artillery Train national advantage. In addition the French had Columns and Bayonets, whilst the British had Rally To The Colours and Lethal Volleys. The French cavalry was superior to that of the British.

Here's the table setup. The French are in march columns in the foreground. The British are marching through, and to each side of, the village. 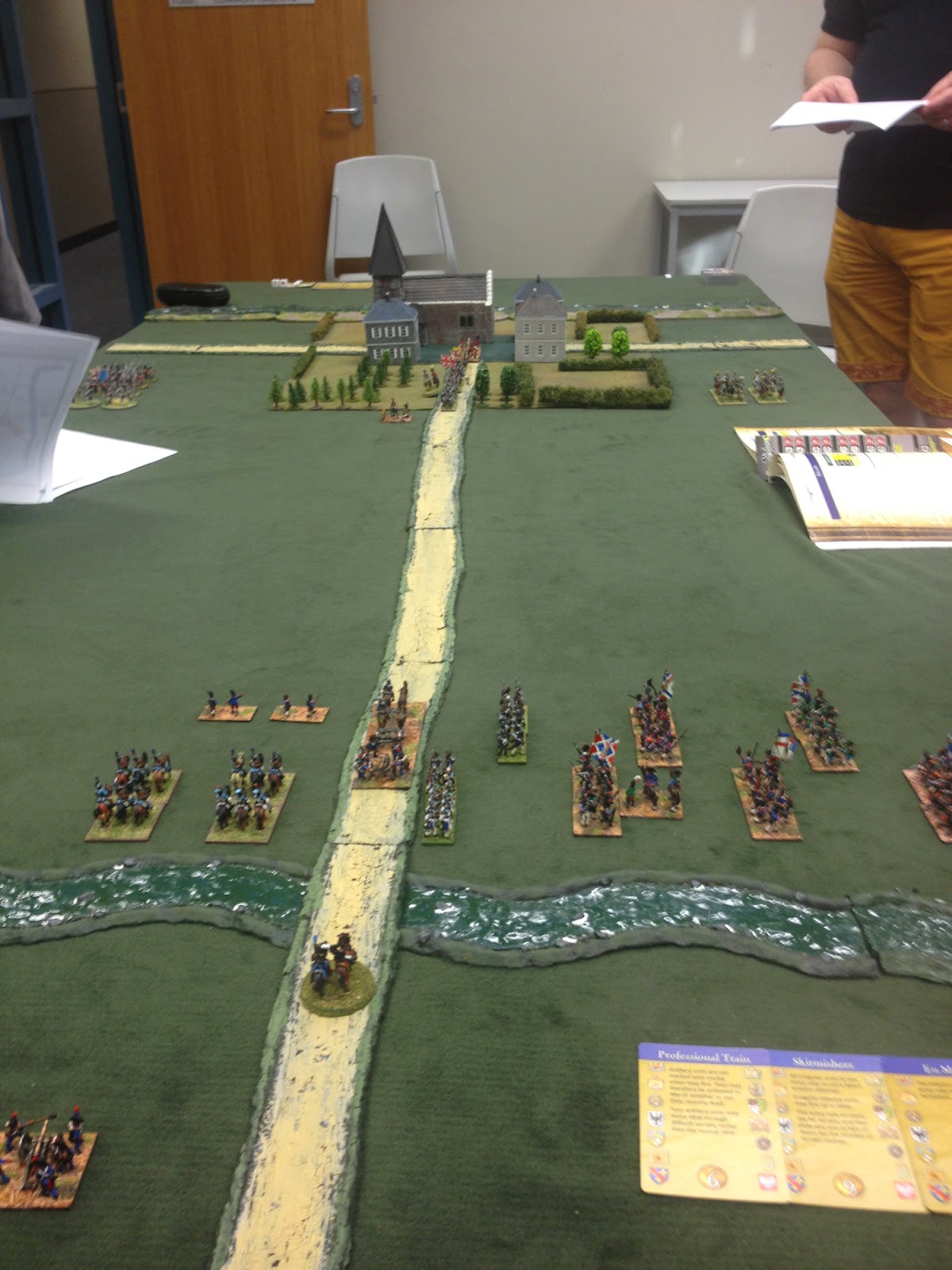 The French cavalry. Watch them; they're important ... 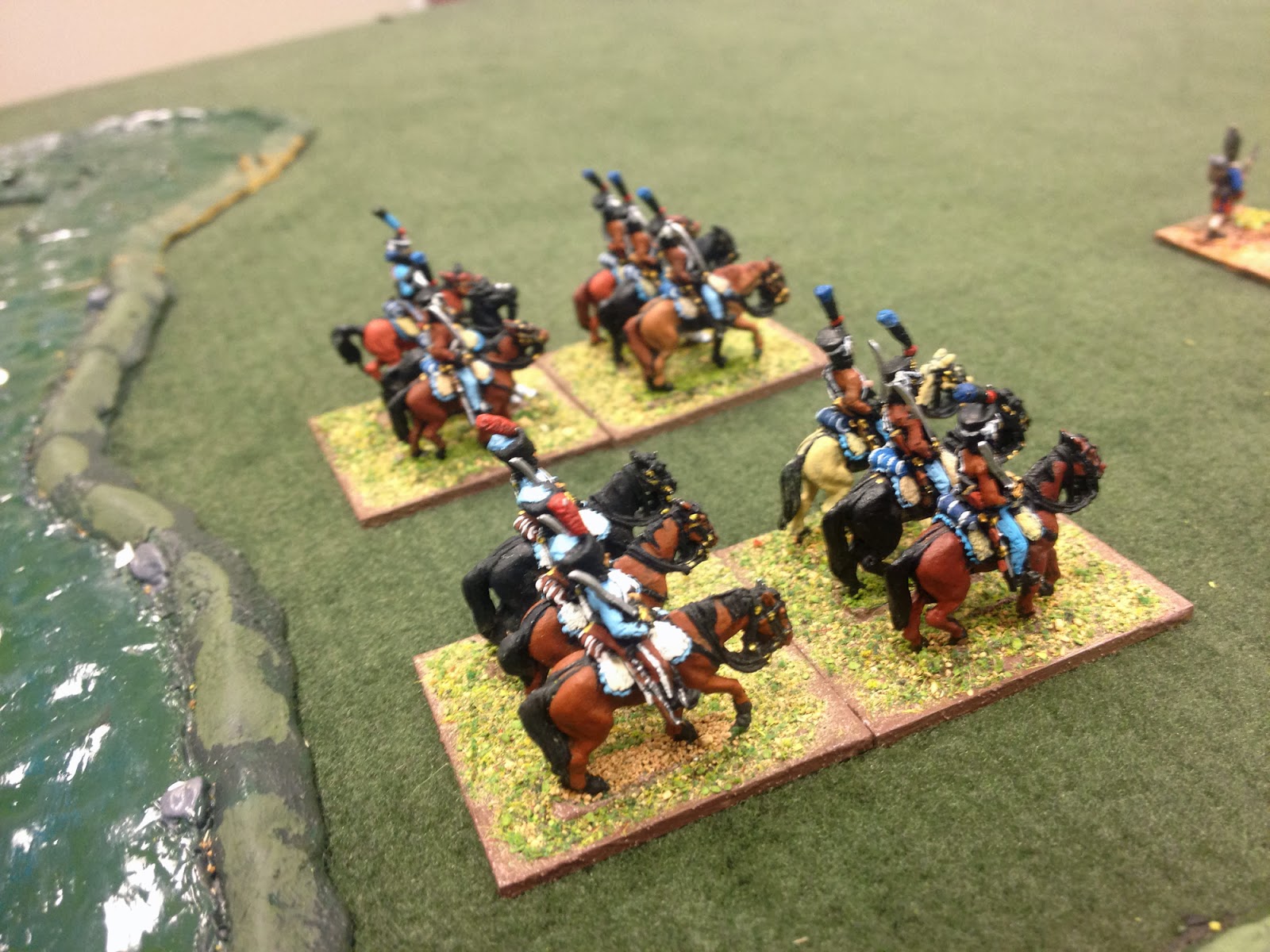 Wellington forms up his brigade ... 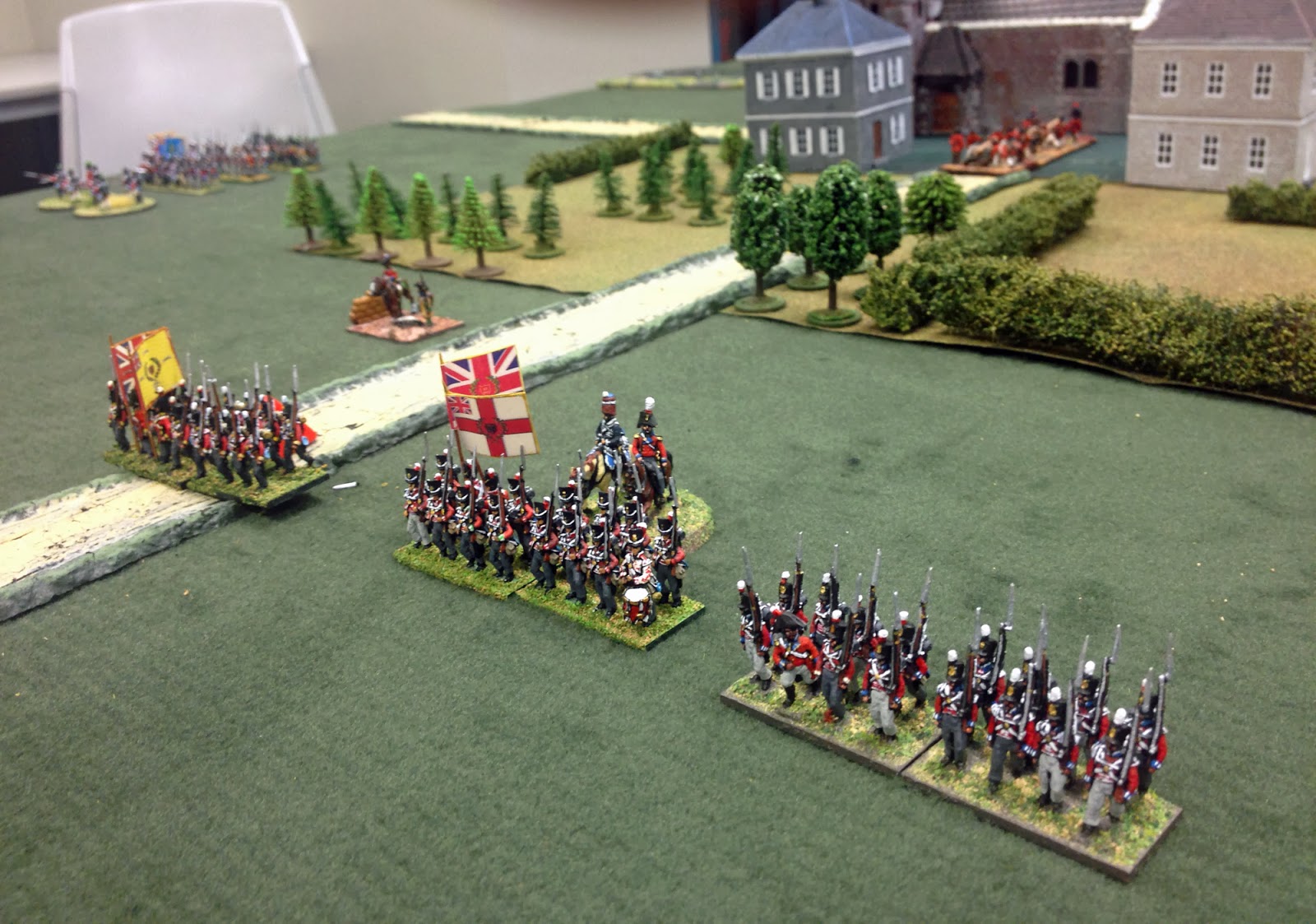 ... whist French columns advance on it. 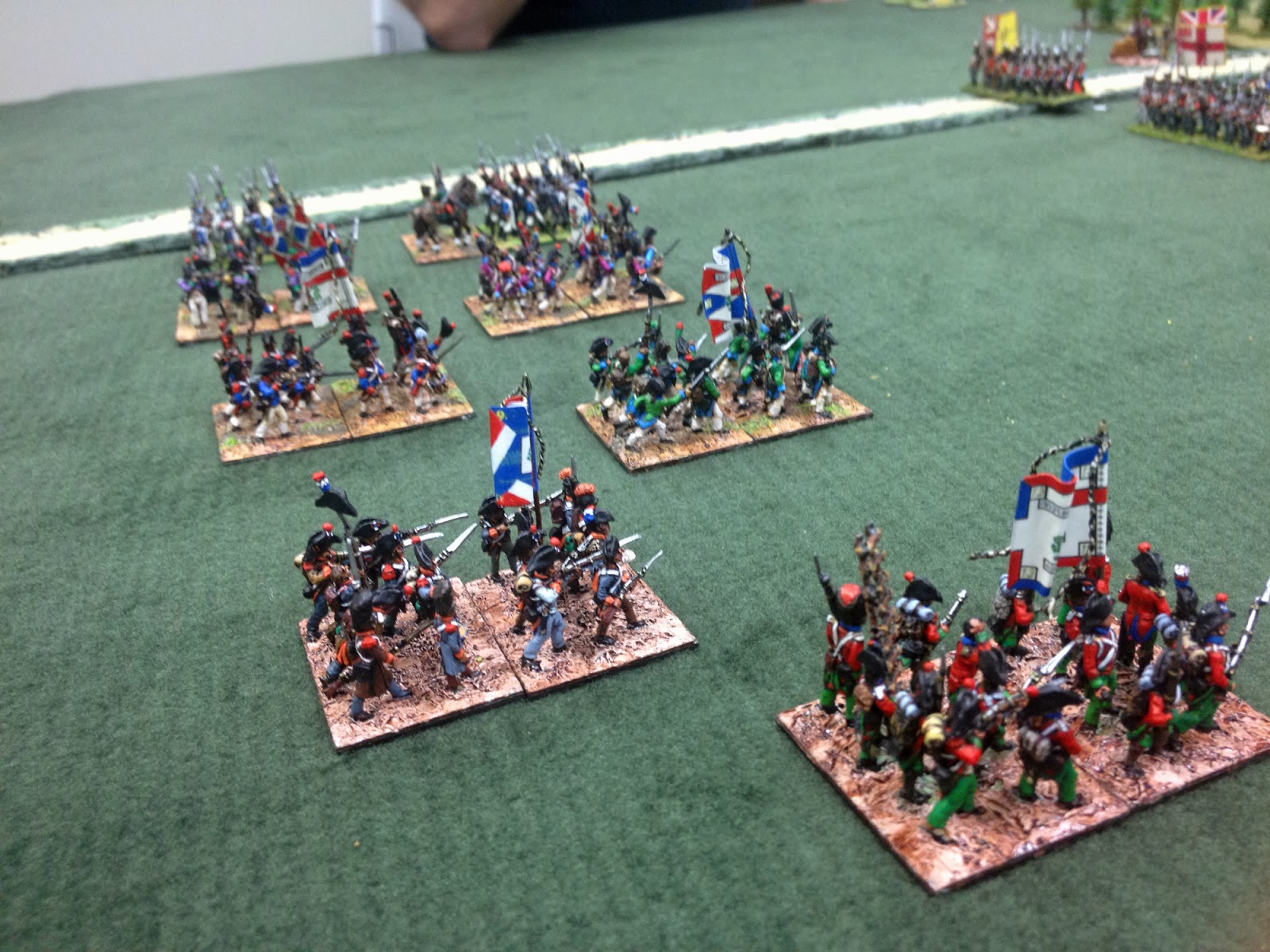 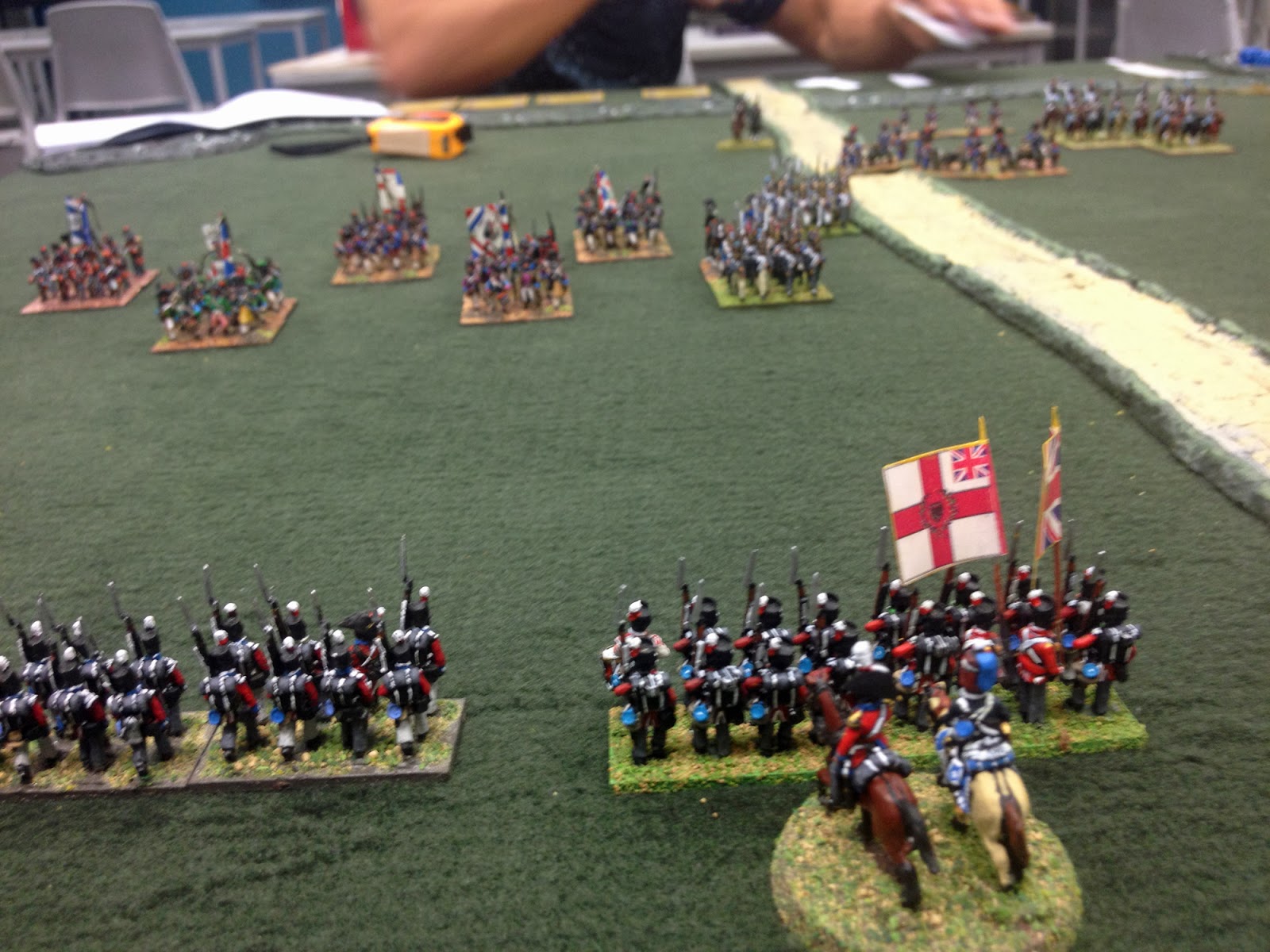 But the main attack doesn't come from the columns - the French cavalry charges towards the British artillery ... 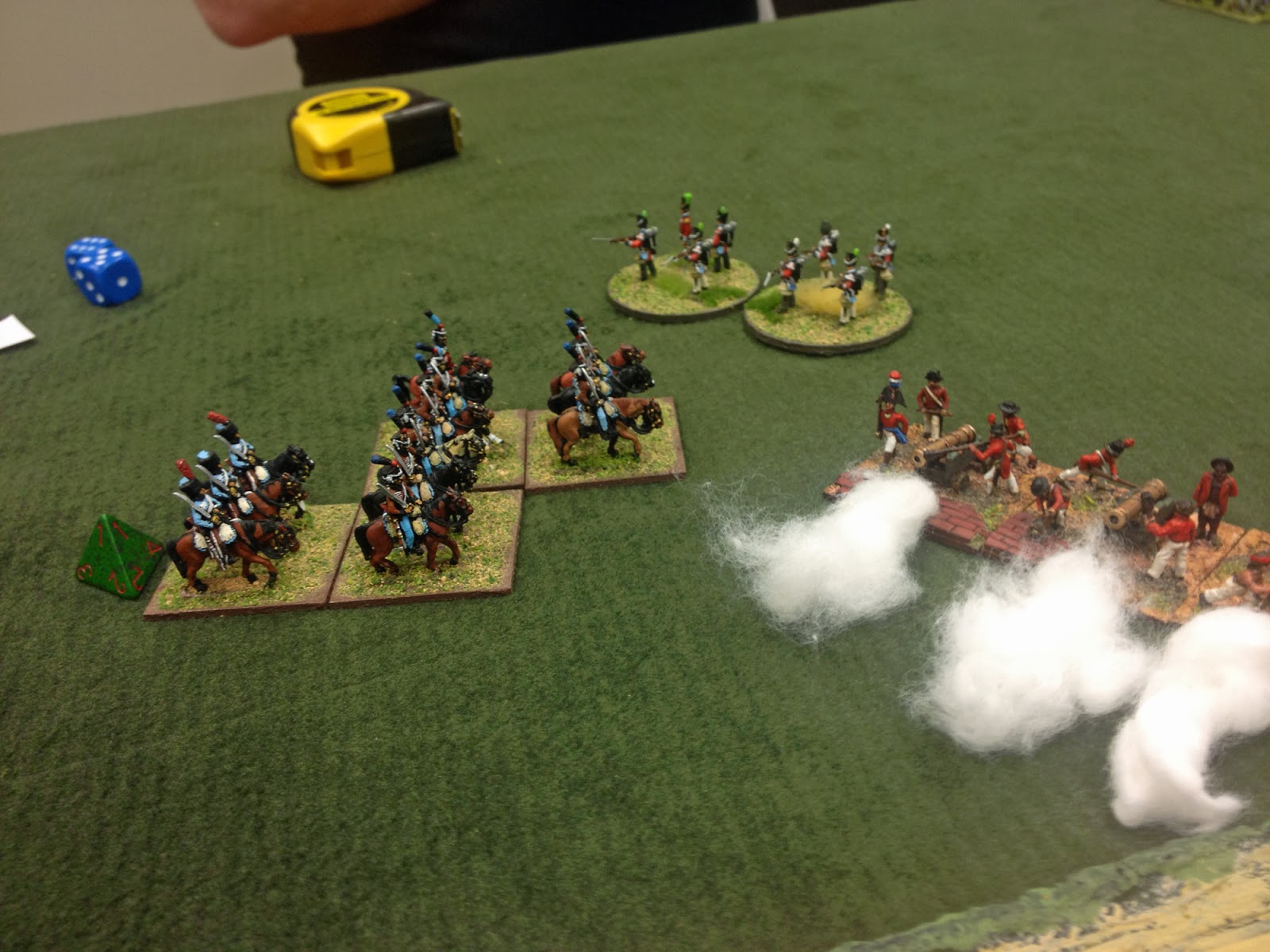 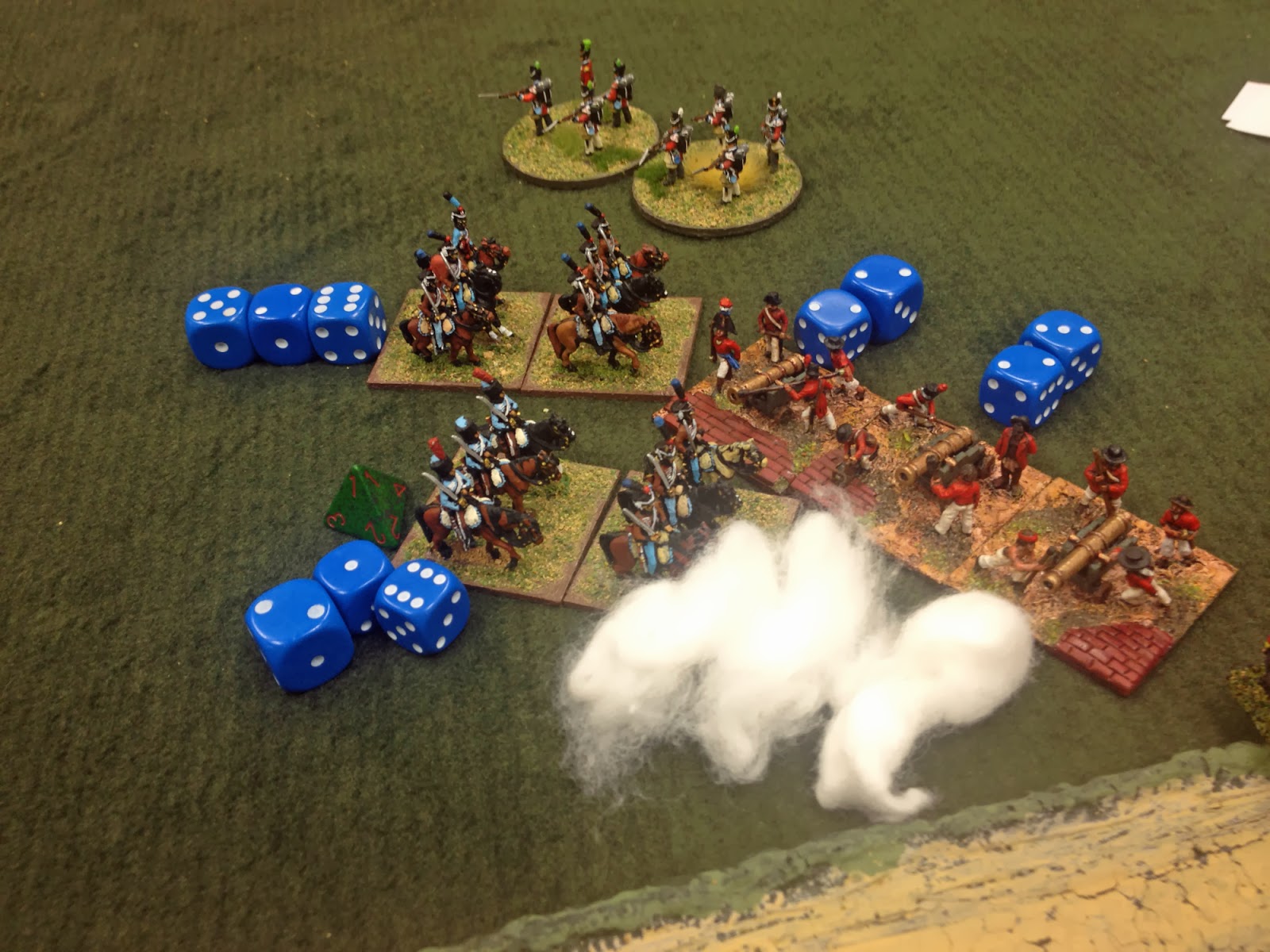 It then moves behind the British line. The British cavalry moved up to defend their infantry. 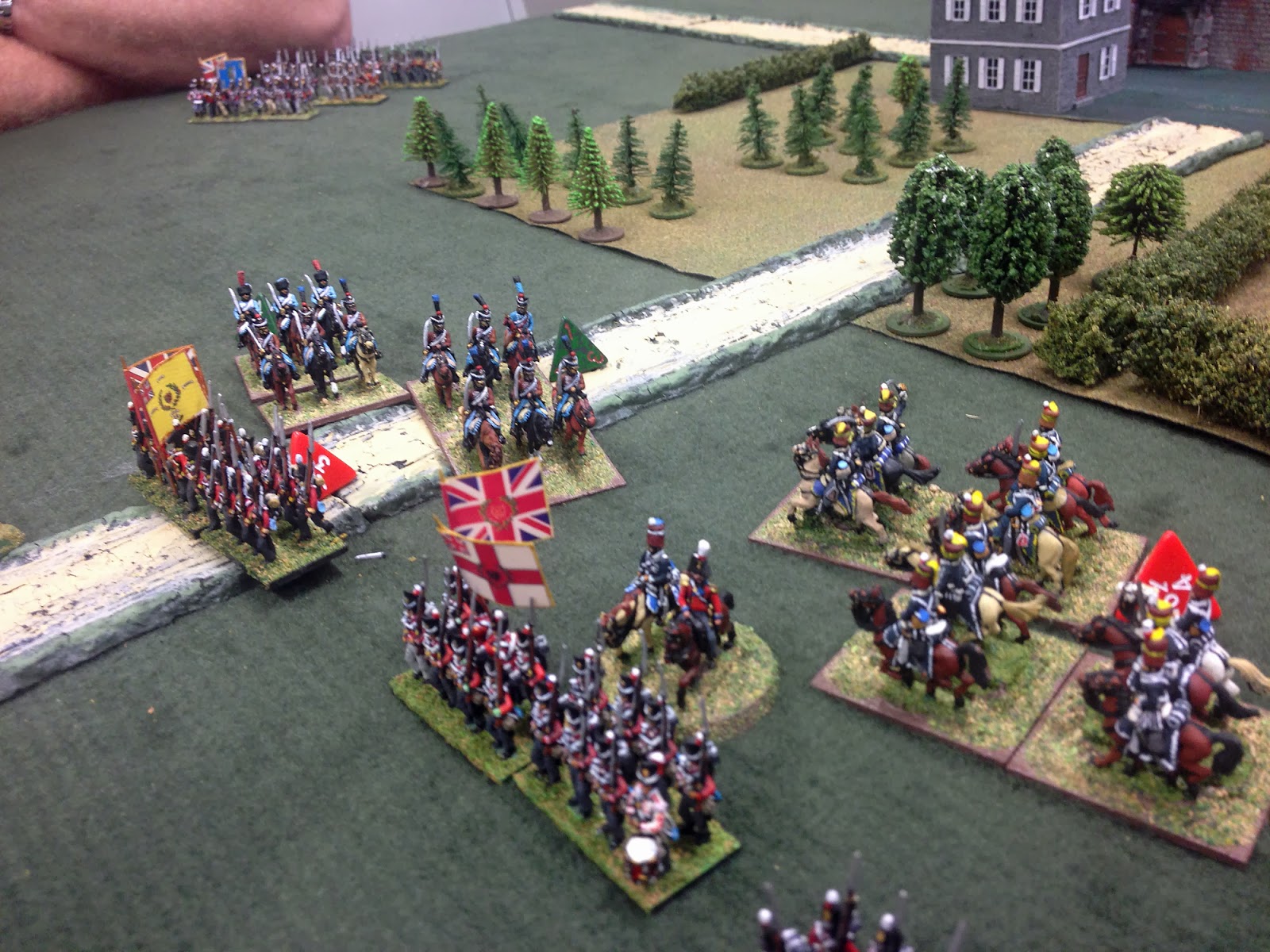 But the French cavalry swept into the rear of the 33rd Foot, routing it and killing Wellington. This left the British morale in tatters. 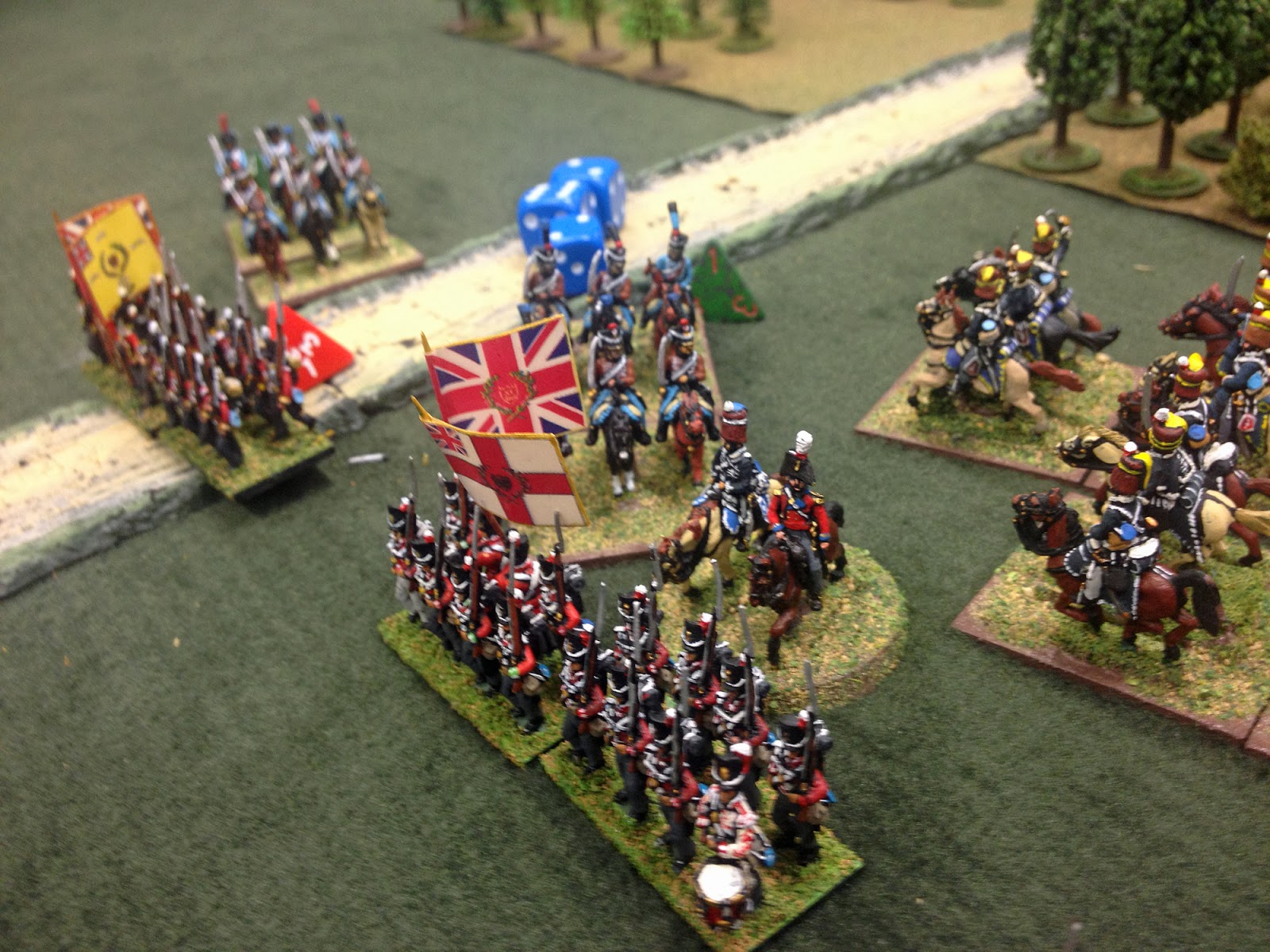 The French cavalry was spent by this stage, though, and a British cavalry charge swept them from the field. However the damage was done - the British morale was shattered and their line broken. 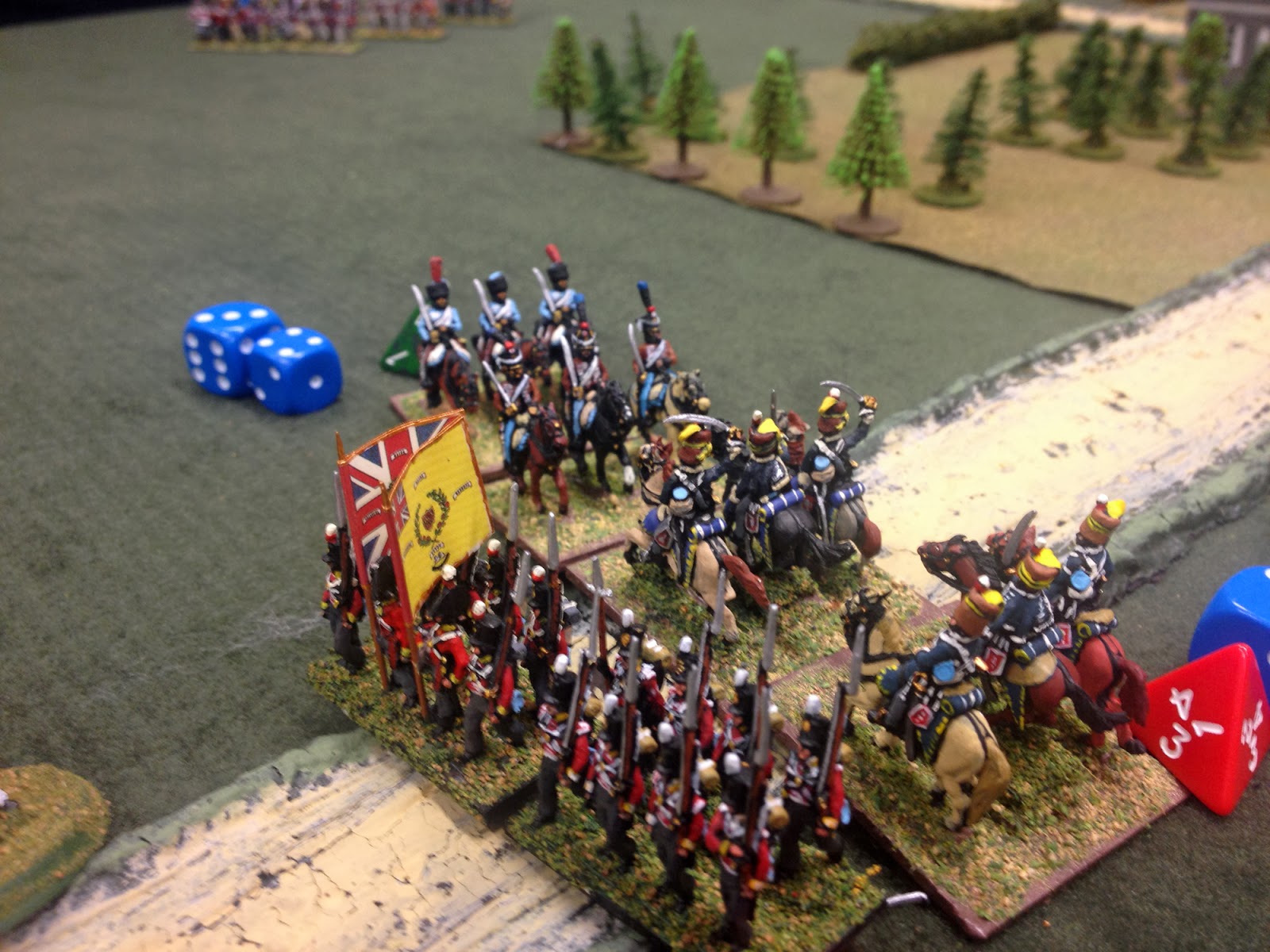 Time for the columns to advance! 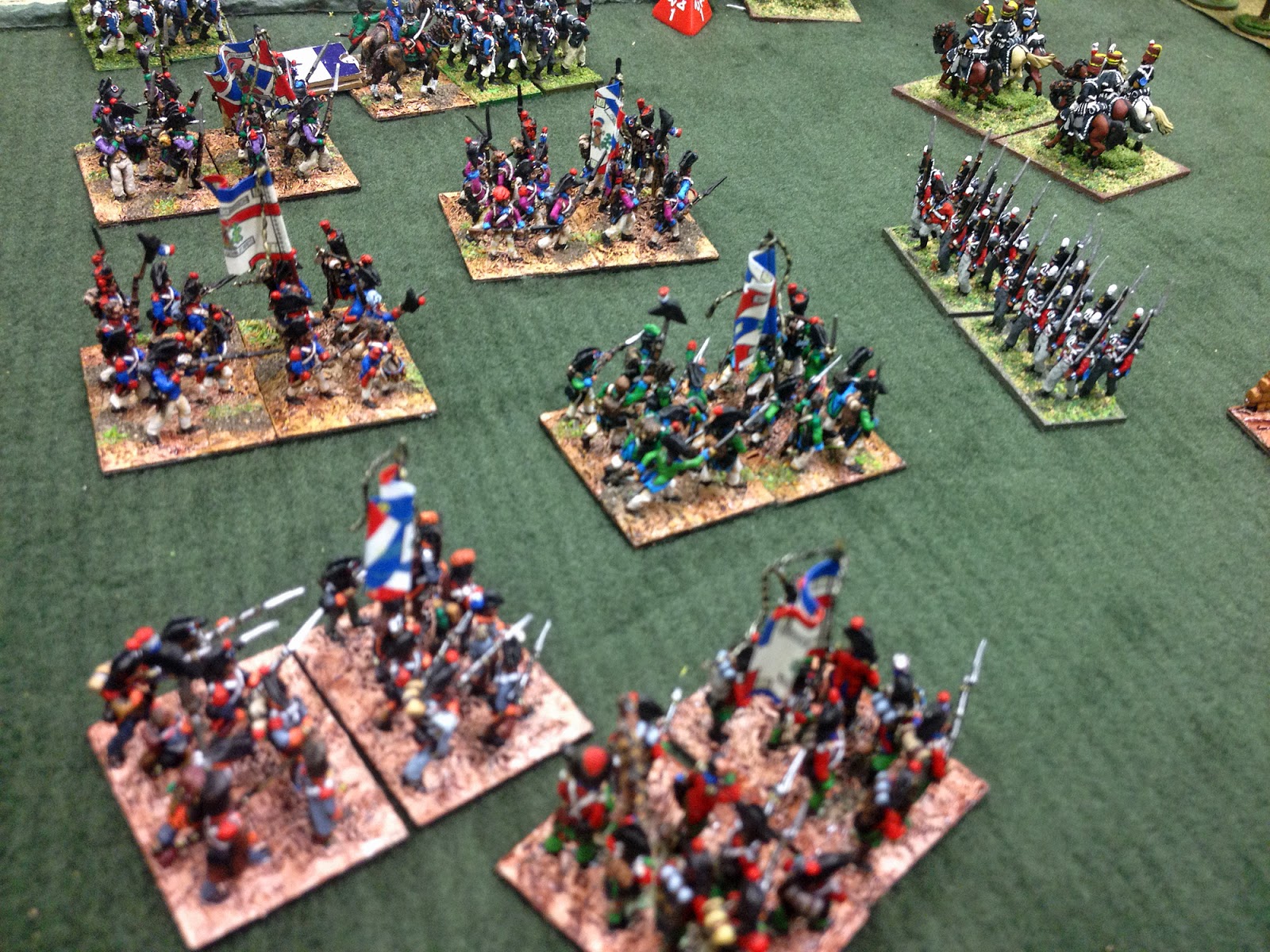 The British cavalry tried to stem the tide, and destroyed one French regiment, forcing their notable to flee to the rear. 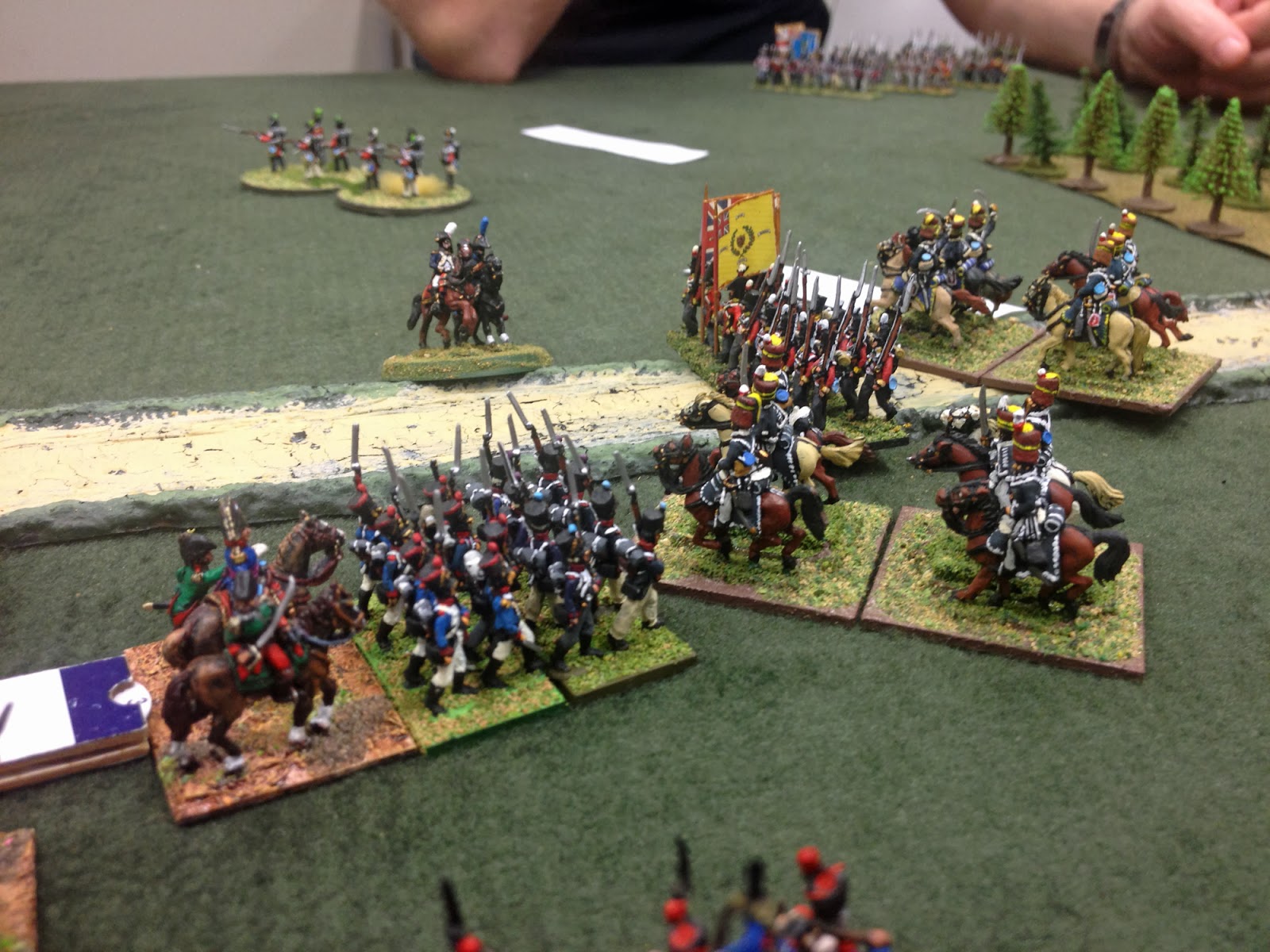 But after an exchange of musketry the other columns went in, and another British regiment routed. With only one point of morale left, against the seven the French had remaining, the British conceded. 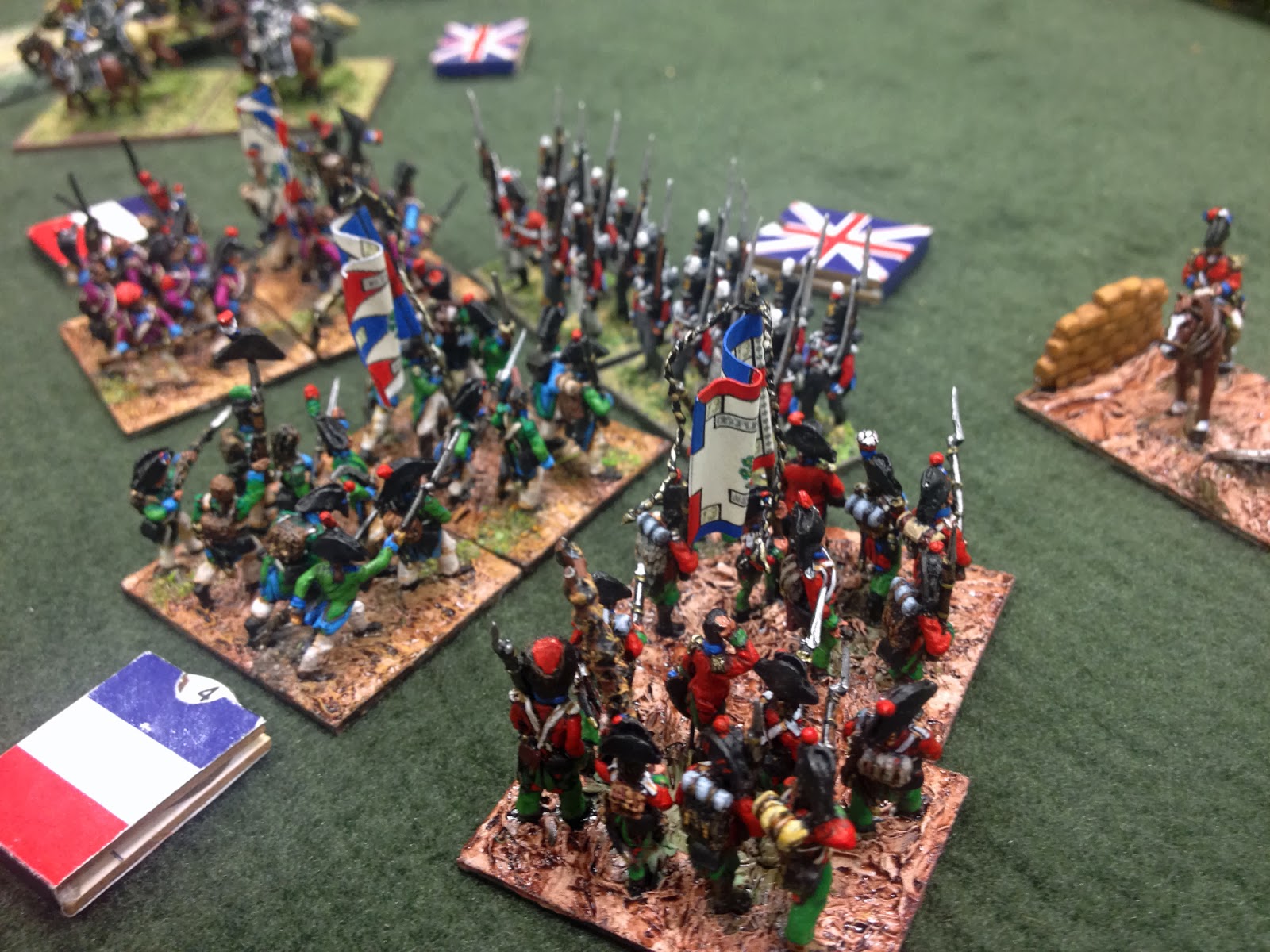 The battle was basically won by a slashing attack by two French cavalry units, which took out key elements of the British line and left them just reacting to the French for most of the game. This was certainly the most exciting and fluid game of Maurice I've been involved with - great fun, and I look forward to next week's extravaganza.
Posted by Kaptain Kobold at 23:05