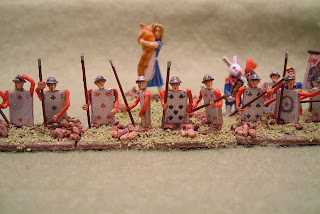 'Alice in Wonderland' is not the most obvious fantasy novel on which to base a HOTT army, but the realisation that Wonderland had soldiers, plus the purchase of a rather nice Alice figure from Hasslefree led me down that particular rabbit-hole. And quite an adventure it turned out to be.

I started putting together ideas and figures for this army in 2004, but the sheer amount of conversion and scratch-building put me off for a long time. It was only after I found myself at home on my own for two weeks (whilst the rest of the family enjoyed a holiday in Australia) that I found the motivation to get on and finish it. I'm glad I did. Aside from Alice herself, every figure in this army is either a scratch-build or a conversion.

The army consist of:

Here it is deployed for battle (in a tournament game as part of Berkeley 2005 as I recall) - the Lurkers can just be seen in the background. 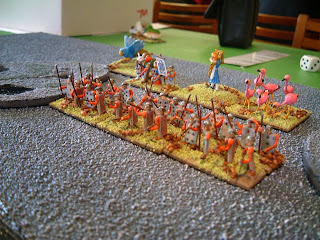 The Alice figure is the most straightforward of the whole army. She's from Hasslefree, and that's the Cheshire cat over her shoulder. I painted her in a classic blue dress, although I believe the first colour illustrations had her in yellow. As stated in the list, Alice is a Behemoth. Not a massive one, it's true, but still bigger than anything else in the army. I have considered - but never tried - a variant rule for her. she starts as either a hero or a Behemoth - player's choice. However on any turn in which the Wonderland army scores a '1' for PIPs she changes to the other type - Hero to Behemoth, Behemoth to Hero. You could use the same basing and figure, and just mark her accordingly. Obviously if she's ensorcelled as Hero she stays as one until she's brought back into play. Let's not get complicated. There should be no advantage or disadvantage to this variant as the owning player can't predict Alice's form from one turn to the next. 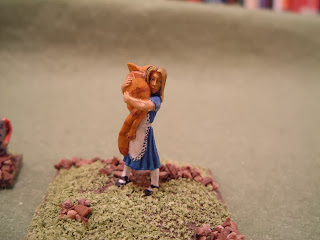 The Cheshire Cat is just a little bit disturbing. 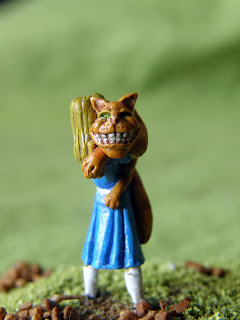 The Queen of Hearts is the army's general. She's from Peter Pig's ACW range and is, in fact, Mrs Lincoln. Abraham Lincoln also appears in this army; you'll see him later. I forget what figure the White Rabbit is based on. The head is green-stuff, with folded fuse-wire ears. I'll cover the soldiers later. One is a standard-bearer, whilst the other carries a big axe and is the sole justification for this element being a Blade. 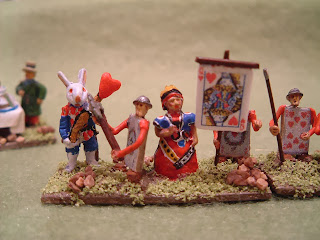 Playing cards, classified as Spears. These are what took the most time to make; including the two figures on the Blade element there are twenty-six playing-card soldiers in this army, and each one is unique. And they were fiddly to make. 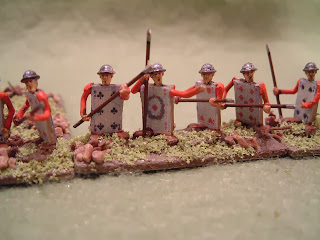 Each started life as a small rectangle of card. I clipped the upper corners of the rectangle to make attachment points for the arms, and drilled a hole in the top to put in the head. Then I scanned, reduced in size and printed off, twenty-six different playing card fronts, plus a set of backs. Each one was glued to the rectangle of card. 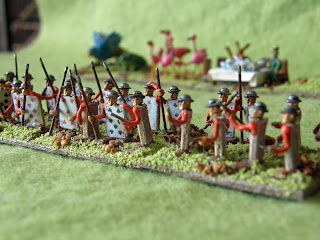 The heads are from Peter Pig. They do an wide range, each with a spigot to make them easy to apply (especially if you have pre-drilled a hole). They didn't do anything medieval, however, so I bought WW1 British soldiers in helmets, as they looked more than suitable. Each head was glue in place. The arms are thick florists' wire, cut to a constant length, and gently bent to form elbows. I can't remember how I planned and designed each pose, but somehow I did. The arms were slotted into place at the top of each rectangle, and glued, with the joint being sealed with a small piece of green-stuff. I then used thin wire for the spears, glueing them to the end of the arms as appropriate. Green-stuff hands hide the joins. Finally I made small feet from green stuff, and each card was dropped onto a pair. I hid the dodgy bits with painting. Each soldier is about 12mm tall. Did I say that they took bloody ages to make? 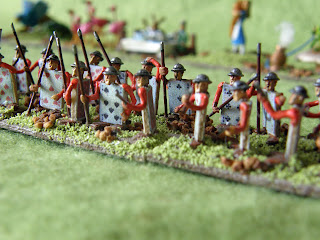 One of the rear-rank soldiers is having a crafty fag. Discipline is lax in the Wonderland Army. 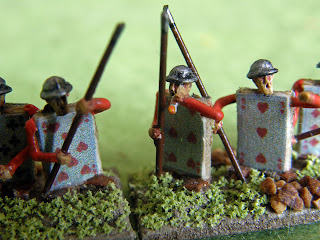 The flamingos are completely scratch-built. The body is green-stuff, as is the head, whilst the neck is thick wire. The beak is made from the end of a flat toothpick, and the legs are thin wire with green-stuff 'knees' and thin card for feet. I used paper to add the wings and tails, then hid everything with the paint again. To be honest they are very big for flamingos; they should be about half the size they actually are, but they would have been fiddlier to make, look less aggressive and I'd have had to have made more of them to fill up the base. 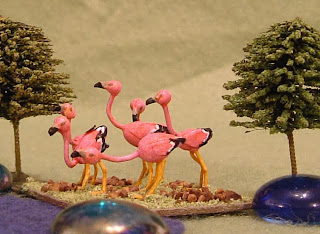 The Mock Turtle and the Griffon make up the other Beast element. I originally thought that a griffon would be easy to do, but in fact all of the commercial figures were really too big and fierce-looking for my purposes. So I made my own - the body is an Irregular miniatures 15mm lion, whilst the head and wings come from a GW 10mm eagle. Green-stuff was used to hide the joins. 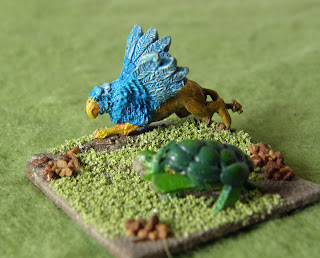 The Mock Turtle is entirely scratchbuilt from card and green-stuff. Not much more to say; it wasn't that hard to make, it's not perfect, but it does the job. 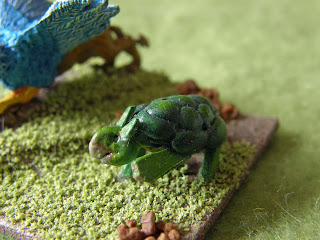 The Caterpillar started life as a Pendraken dungeon crawler, but really that just makes up the back end. The rest is green-stuff and wire. The mushroom is green-stuff too. The hookah is made from a couple of beads, and more wire. 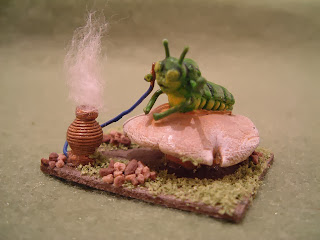 Remember I said that Abraham Lincoln was in this army? Here he is, except he's the Mad Hatter. The hare is another figure of unknown origin, with a green-stuff and wire head like the White Rabbit's. The table and chairs are from Pendraken's dungeon furniture range, but I added a white paper tablecloth. The crockery is green-stuff, as is the Dormouse you can just see poking out of the tea-pot. The sandwiches are painted card. 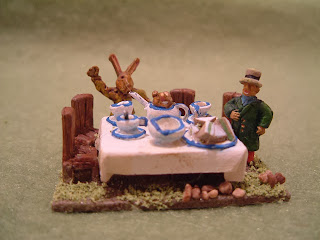 I settled early on the idea of using a house of cards as the stronghold, and this was easy to make. I bought a cheap pack of miniature playing cards, glued them together and that was it. 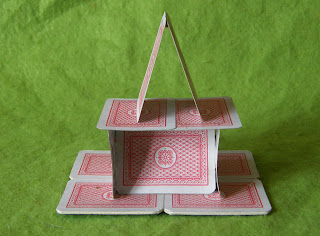 Of course, it comes apart for storage purposes. 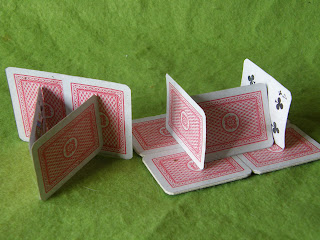 Finally, the army has some specialist terrain, just for colour - a forest of mushrooms. These are wooden mushrooms I bought in a craft shop, painted and then based on pennies. 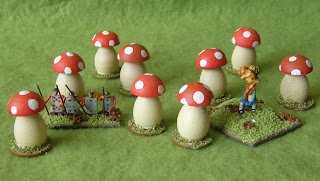 This can be quite a useful army, with a solid core of infantry and a reasonable bad going component. The Beasts offer the only speed, so it can be out manoeuvred, and its fatal flaw is that it has no element capable of engaging aerials, either in close combat or with a ranged attack. I have considered remedying this, by converting one element of Spears to Shooters, by giving them bows or muskets. One Shooter isn't brilliant, but it gives the army some anti-aerial capability.  I would probably reclassify the Blade general as Spear general, just because there's something comforting about fielding large numbers of Spears in even numbers.

And here's something you don't see very often - original design sketches for some of the elements in the army. 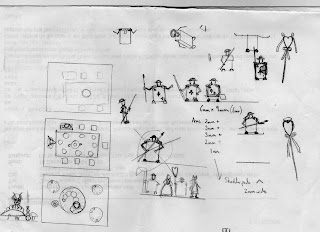