The Battle of Boldon Hill

There have been a few blog posts and similar with refights of the 1644 battle of Boldon Hill over the past couple of years, and I thought I ought to have a go as well.

The battle was fought between Royalists from Newcastle, led by the Marquis of Newcastle, and Scots under teh Earl of Leven  who had crossed the border earlier this year and besieged the town. Failing to make any headway they had raised the siege and marched south, threatening Durham, and also looking to link up with English Parliamentarian forces. Not content to sit in Newcastle, the Marquis pursued them, and the two armies danced around each other for a couple of weeks, and Newcastle threatened the Scots' supply line.

Eventually the two forces drew up opposite each other at Boldon on 23rd March, the Royalists on Boldon Hill and the Scots on Whitburn Lizard. The area between the two armies was intersected by hedges, fields and a fairly significant stream, although there was open moorland to the east of the battlefield which both sides covered with their horse.

The armies advanced late in the day, and there was inconclusive fighting as both sides were hampered by and took cover in the hedgerows between them. The armies shot at each other into teh night until the Royalists withdrew to their original position.

Both sides claimed the victory.

Afterwards the Royalists withdrew to the south and the Scots followed. They met again at York and were eventually both part of the armies at Marston Moor later that year.

I decided to refight it with my Portable Wargame rules.

The board was initially derived from the scenario, with some additions from this map which I lifted from a post one the Prometheus In Aspic blog.: 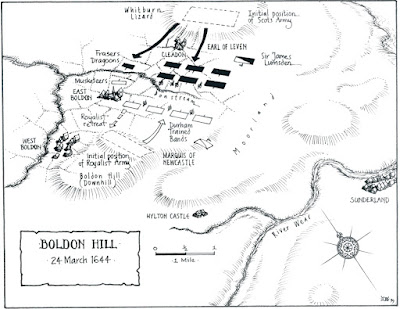 Here the OOBs I came up with.

Basically I went with what was in the original scenario, aside from adding some dragoons to the Royalist force. The Scots have a slight numerical advantage, but with their supply lines under threat I reasoned that they had to take the battle to the Royalists. 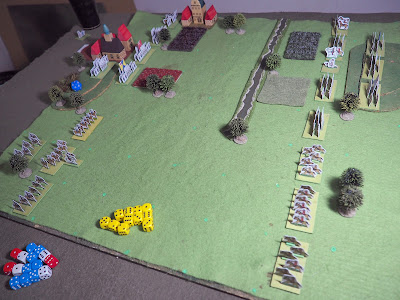 The Scots' deployment. I used die rolls to make some of the deployment decision; the Scots put their weaker infantry to the fore with the trained foot as the second line. 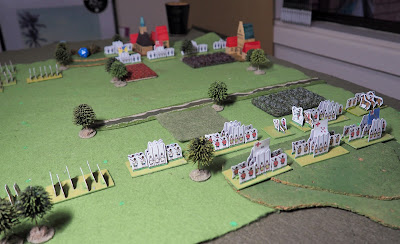 Early moves. The Scots advanced their horse, looking to strike first and neutralise the slight advantage the Royalists had in numbers. Meanwhile in the distance the first units had crossed the stream heading towards the Royalist positions. I made use of my dice-based initiative system with this; a unit crossing the stream could only do so if it was allocated an initiative dice with a score of 5+. In addition it had to end movement after doing so. 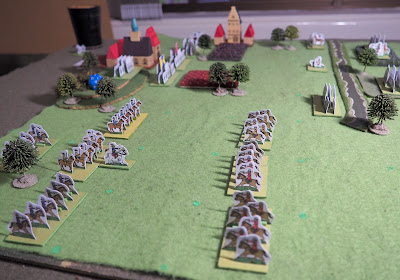 The obligatory cavalry melee on the flank. The Royalists made a half-hearted response to the Scots' advance, since most of their activations were reserved for their foot, in order to get them into position in the hedges before them. However the attacks they did make were not without success. 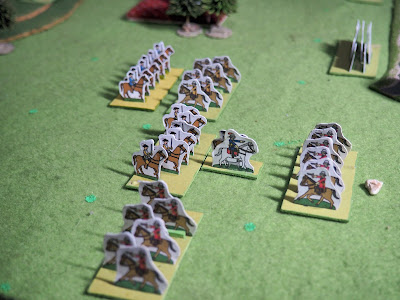 The Royalists were now lining the hedges around East Boldon, as more Scots drew up in front of them. At this stage I should point out that I just used my regular Parliamentarians as Scots, since I haven't printed off any specific troops for them yet. 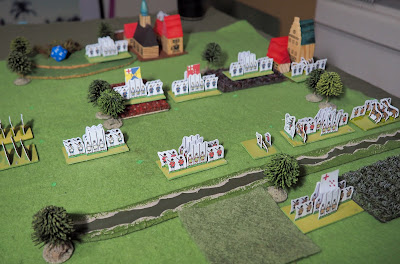 The cavalry action continued on the moorland, with the Royalists quickly gaining the upper hand. Try as they might the Scots just couldn't score hits on their opponents. 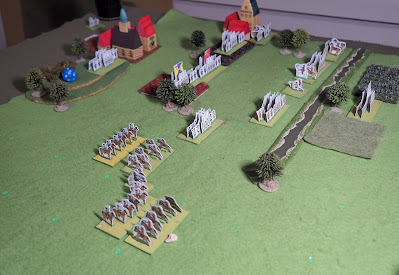 First blood to the Royalists, as one of the Scots' units of horse routed. 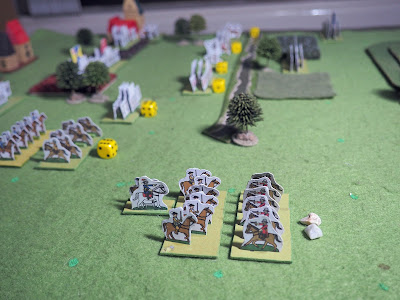 The Scots pushed forwards against the Royalist positions. Their artillery banged away with little to show for the expenditure of gunpowder. 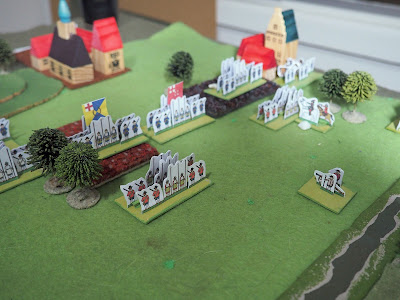 In the centre the Scots had some success, pushing the Royalists out of the enclosure and back towards Boldon Hill, as well as threatening the flank of the whole infantry line. 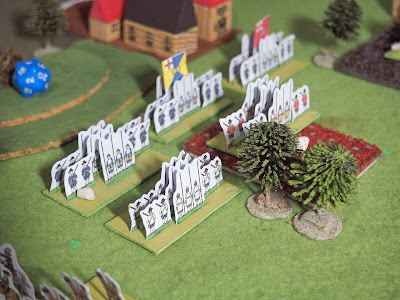 However the Royalists rallied and won back the lost ground. In a stunningly unlucky series of hit rolls, the Scottish foot unit that had won the enclosures simply disintegrated and fled. 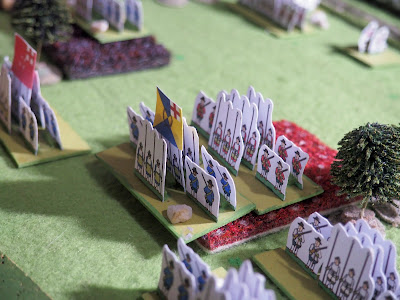 At the western end of the field the Scots were making little headway. 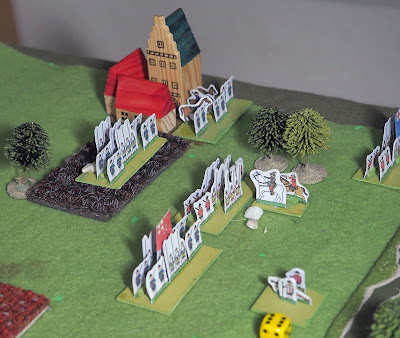 However back in the centre one of their foot regiments was fighting well. Facing Royalist foot to their front and horse to their flank they stood their ground, driving off the foot first ... 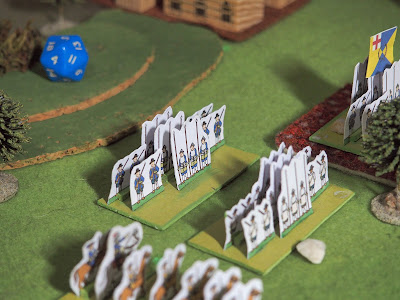 ... and then the horse to their flank. As a bonus they unhorsed the Marquis of Newcastle himself. 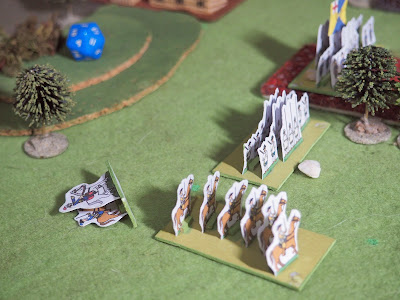 But the Scots' position was not looking good. They'd led their attack with their raw foot, hoping to bring up the trained units in support. However activations had not been kind, and the supports had had trouble crossing teh stream and getting into position. The raw foot had borne the brunt of the fighting but soon melted away. Meanwhile the Scottish horse had been completely dispersed with little loss to the Royalists, who now swept into position on the eastern flank of the Scottish army. 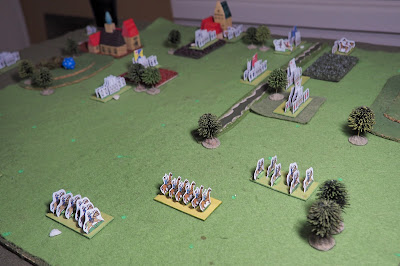 Faced with little hope of breaking the Royalist position, and with horse threating their flank, the Earl of Leven withdrew his forces, conceding the field to the Royalists.

I'd set the game at roughly ten turns; I would dice at the end of each turn from ten onwards to see if darkness ended the battle. However it actually finished in six. The end result was a lot more decisive than the historical battle. It's a tricky one to set up in that respect; you want to get a good game out of it, whilst reflecting the terrain and forces of the actual action. So closing down the terrain a little more would make the infantry fight less conclusive, by giving the Scots more cover from both musketry and horse, but would make it likely that the battle will not come to any kind of conclusions. To be fair the Scottish horse collapsed very quickly, which pushed them rapidly to their breakpoint but without the Royalists showing any sign of reaching theirs. I suspect a more cautious approach by the Scots' horse would work, using them to simply cover the flank of their foot and bringing up some of their foot in support; they have pike & shot to spare, at least initially.

So I might refight this, but with a few terrain tweaks - a couple of enclosures between the stream and the Royalists, probably - and a changes in the Scots' tactics.