Another One Hour Encounter

I replayed the encounter game from yesterday.

I didn't change any of the setup; I decided that I'd adopt the more cautious approach of allowing reinforcements to stack up before deciding when to advance. Here's the game a few moves in. The Swedes (left) had got three infantry units on, and advanced to the hill. The Russians had started with cavalry in play, and had sent them around the flank to threaten the Swedes but not, at this stage, engage. The Russians already had most of their infantry on as well - they got lucky with reinforcement rolls - and their commander was ready to bring them forward. 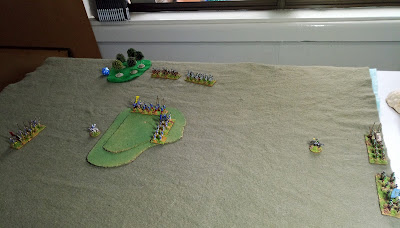 A few turns later. The Swedes had a third infantry unit in play. The Russians had simply advanced and assaulted the Swedish line. The plan had been for their cavalry to support the attack, but having moved into position it was now reluctant to charge. 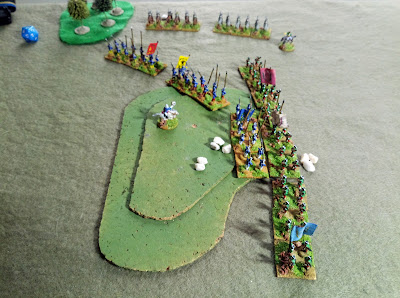 In fact the Russian attack failed, but the Swedes were so beaten up that a second attack routed them. Meanwhile the cavalry finally attacked, but became stuck in a stationary melee with Swedish infantry that just wouldn't quit. 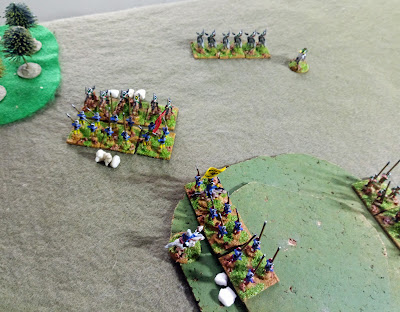 Final positions. The Swedes had finally got one unit of their horse on, too late to be of any use. Their foot was shaken and had been driven off the hill, which was now completely under Russian control. The Russians had won again. 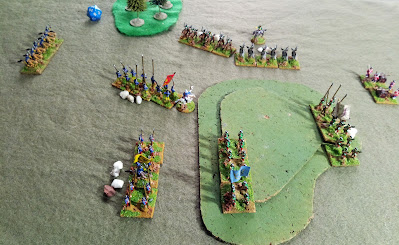 I'm not aware of any errors I made this time. And it played out in well under an hour, although not having to teach the game to a twelve week old child helped.