I'll not beat around the bush; actually gaming around here has been a bit thin on the ground lately, what with one thing and another (you can expect another 'Burlesque Update' post fairly soon, I can tell you that for free). But from time to time my mind has wandered into the gaming realm, and there's a couple of half-baked projects floating around in my head or sitting on my desk.

This was tonight's. For a while I've fancied trying some small ancient naval battles using Galleys & Galleons. So I thought I'd see if I could make a simple ship on the same lines as my lolly-stick galleons.

I checked some actual ship measurements, looked at loads of pictures to get the basic shape of ancient warships into my head, and then sketched out some ideas. This evening I cut up some card and a lolly-stick, and made this trireme. 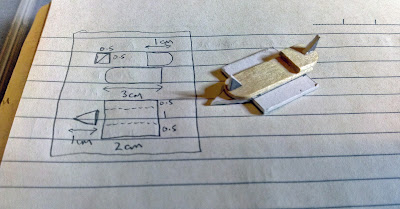 The plans were written out after the fact, mostly because if this sits on the back-burner for another year I'll need them for reference. But I was quite pleased with what I put together; it evokes the right feel.  I'll probably run a strip of thin card down the centreline as well, just to break up the deck. 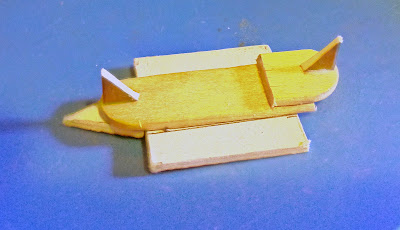 I think the design can be scaled down a little, to at least cover a bireme, and I'm certain it can be scaled up to make the larger post-classical ships. For now I wanted to keep things a bit Peloponnesian War for the sake of simplicity.

The next step, obviously, is to chop out multiple components, and make a batch of ships.
Posted by Kaptain Kobold at 21:14