When I last posted an update I had just done my first independent performance as a solo artist, at a local fundraiser. Since then I have more performances under my belt. I previewed the first in my previous update - Burlesque in Hand in Sydney. This is a monthly show that's really fun and friendly, and does a great job of showcasing both experienced performers and, as they quaintly like to call them, 'fresh meat'. It has a great reputation for giving inexperienced performers a chance to shine, and was the first show I applied to after I made my solo debut.

Although I was apprehensive about what would be my first time at a 'proper' show without the support of the rest of our burlesque school, I ended up having a fantastic time, with a keen crowd to cheer me on, a lovely bunch of other performers backstage, and smooth and friendly organisation by the Burlesque In Hand team.

Of course I added to my photo collection. For this show the photos were by Allan Rees-Bevan (@arb.photographer). He did a nice pre-show promo shot of each of us. 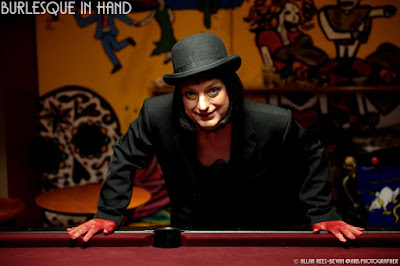 And there were proper performance shots as well. 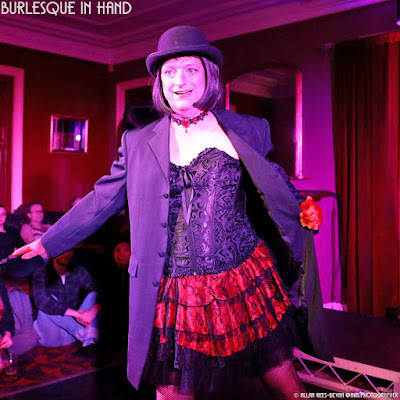 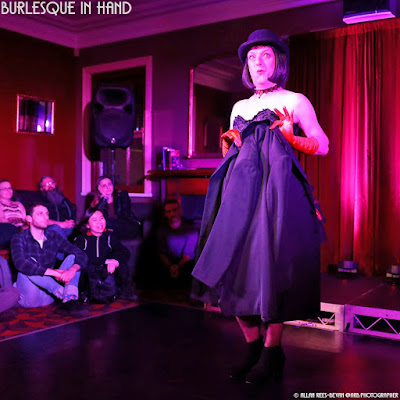 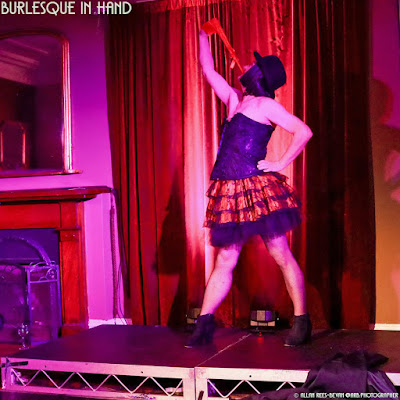 My next performance was at the closing night gala for Wollongong's Queer Arts Festival, now in its third year and growing larger with each iteration. At the centre of the festival is an exhibition of art by the local LGBT community, and both Mrs Kobold and I contributed - she a poem, and me a collection of photos taken backstage at some of our earlier burlesque shows.

Here I am posing with my contribution. 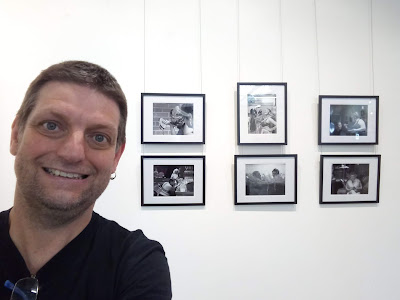 And one of the photos, featuring my lovely daughter. 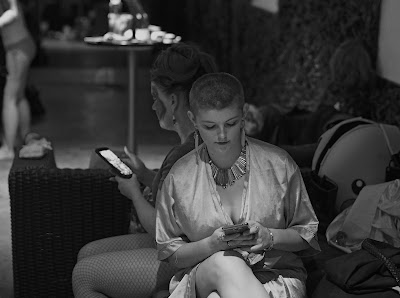 The Gala itself was a fun evening, and I was thrilled to do my performance in what was essentially a variety show rather than a straight burlesque show. To be fair the nature of the festival, and the people involved, meant that a lot of the variety were drag acts, but after burlesque performers I can't think of any group of people more fun to share a backstage with than a bunch of drag-queens. I don't think there were any official photos of the actual event, and at the time of writing haven't seen any unofficial ones either. It was the same act as before so you can imagine what it was like. But here I am mucking around taking selfies during the technical rehearsal. As you can see, the show was actually in the art gallery itself. 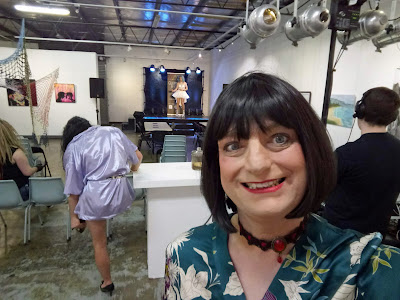 (As an aside, one of the other festival events I attended was a karaoke night. Whilst I've done it in a private room with just friends and family, I'd never done proper, public karaoke before. Let me just say that I enjoyed my first taste of it enough to go back later in the evening for another try. As with my burlesque performances, I made up for lack of talent with boundless enthusiasm.)

And this last week I was back in Sydney for another of the regular shows, Red Light Confidential. Again, there are no official photos of this event yet and the backstage ones are the same as above. This show marked the end of my independent solo performances for a while; I've done four shows in the past few months, and I think my act has had enough exposure for a while. I'm preparing for another group performance in October, but my next step is to choreograph another solo routine. This is quite daunting, but will be an interesting challenge. I've selected some music, and have a rough idea what I want the act to look like. Now I just need to build the 'story' and work out the moves.