Wildlings vs The Dukedom of Ceidonia

I fancied a game of HOTT today, and squeezed on in before we headed off to see 'Rogue One' (which was an order of magnitude better than that hideous mess the franchise cranked out this time last year). I had the Ceidonians out on the table, since they currently don't have a box to live in, so decided to use them. When I put together Prester John's army the other week I repainted some of the dodgy old knights I didn't use for the army in the Ceidonian livery, allowing me to drop the Ceidonian steam-tank if I want to run them as a more conventional medieval army. For this game the army consisted of: 4 x Knights (including the general), 4 x Spears, 2 x Shooters and 2 x Blades. A classic two-point terror.

I fancied a game with a bit of a Game of Thrones vibe, so got out the Wildlings. They defended, but I couldn't be doing with ferreting out the snow terrain, and the defended some green fields instead. The Wildlings were: 2 x Riders (including the General) 1 x Beast, 2 x Shooters, 1 x Behemoth, 5 x Warband.

With hindsight this was going to be an awkward game. The Wildlings are very strong in bad going, and without it they are vulnerable to the massed Knights of the Ceidonians. The Ceidonians are weak in bad going. So whichever army defended would be looking to set up a terrain which would seriously inconvenience the other army. I used my DBA 3 style random terrain system, the Wildlings went for four pieces of bad going and a hill and got to place them all, creating a very closed battlefield.

Here's the Wildling deployment. The Ceidonians opted to try and attack out of the worse of the bad going into the one large open area. Their deployment roll saw them doing the opposite. 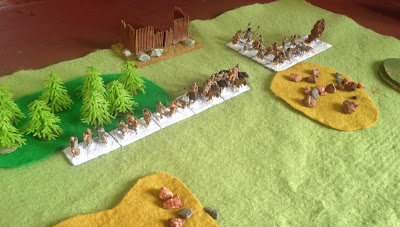 The plus side of being the attacker is that you get to set up after the defender. The Wildlings had gone for a wide, cover all approaches, deployment, so the Ceidonians went for a concentrated punch against their left, with a line of Spears backed up by a line of Knights. The former was designed to hold the Wildling Behemoth in place, whilst the Knights were there to exploit breakthroughs or provide a dangerous retaliation if the Warband destroyed any Spear elements. The two Shooters were assigned to cover the one exposed flank. 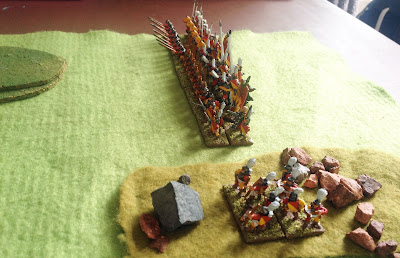 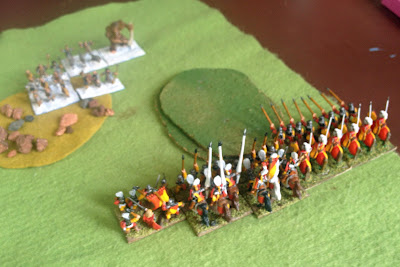 The Wildlings redeployed in response, shifting some Warband over to the endangered flank, moving the Riders up in support and pushing forward with their Shooters against the Wildling left. 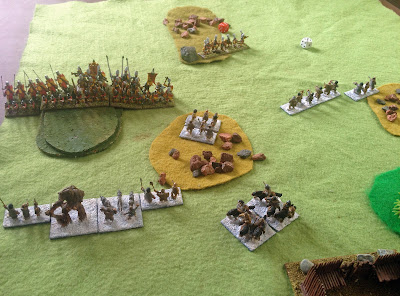 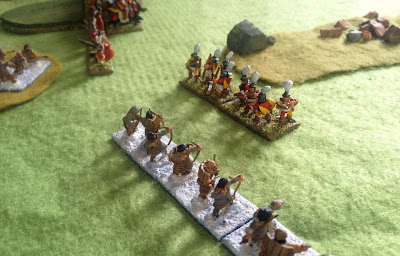 ... and the Ceidonians came off worse. 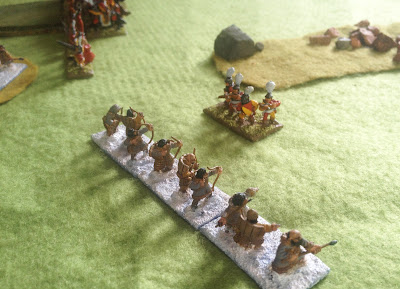 The Wildlings launched their attack. 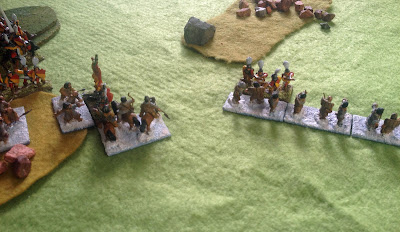 But the attack was driven off. 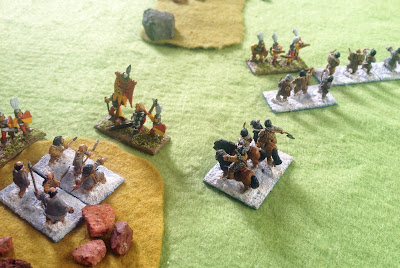 The main Ceidonian force was almost at the main Wildling line. The Duke of Ceidonia and some Spears detached from it to help bolster the flank. 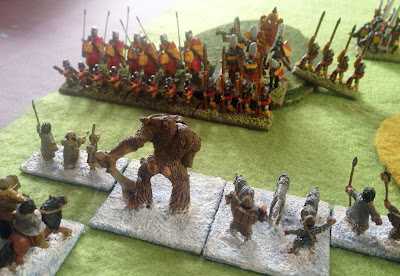 Fierce fighting in the bad going ... 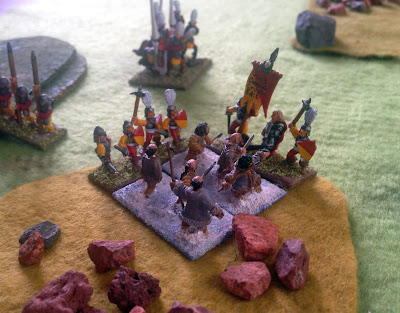 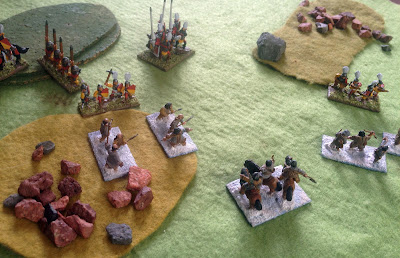 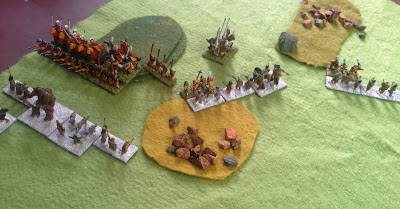 On their right they lost some Shooters to the Ceidonian crossbowmen. That was the last activity of note on that part of the field. 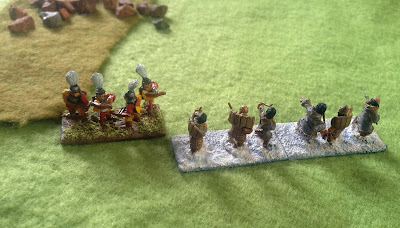 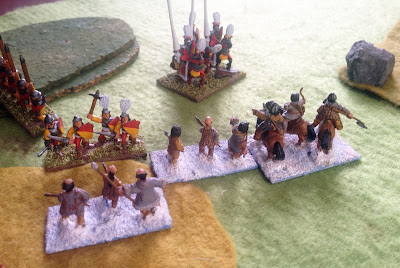 And their main force now crashed into the Wildlings ... 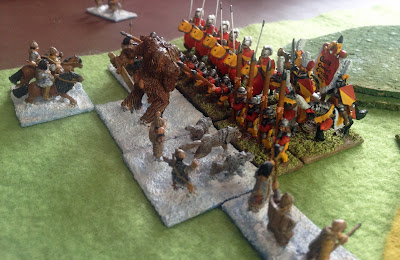 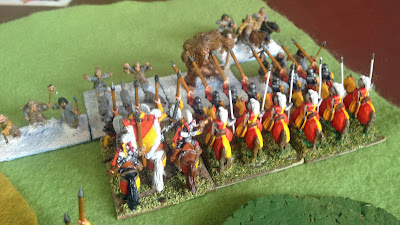 ... with mixed results. One of their Spears was destroyed by a Warband, but the Skin-changer Beasts were overwhelmed in return and the giant was driven back. 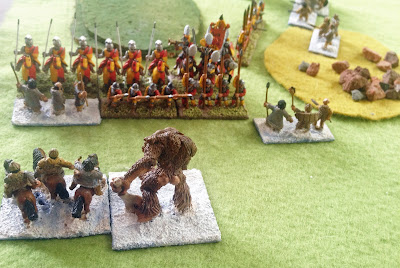 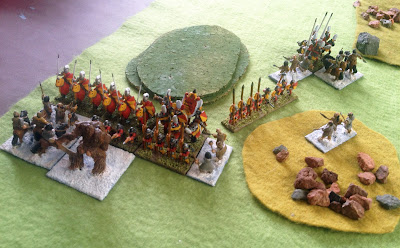 Wildling Warband fell, but so did more Ceidonian Spears. 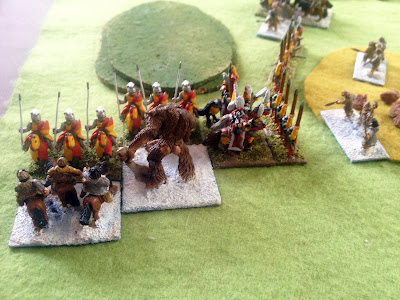 The fighting became more desperate. The Wildlings were now well ahead on points, needing only to destroy two more Ceidonian elements to win, whilst only having lost three themselves. 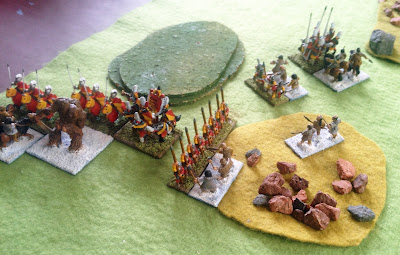 The Wildling giant smashed his way through some Knights ... 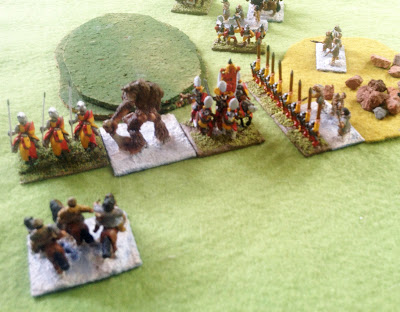 ... and turned on the Duke of Ceidonia himself. This was the crunch - literally - for the Ceidonians. They were only one element shy of defeat, and anything other than a draw or a doubling of the giant would see them lose it - either by destruction of the general, or by the giant recoiling over the Knight behind it. 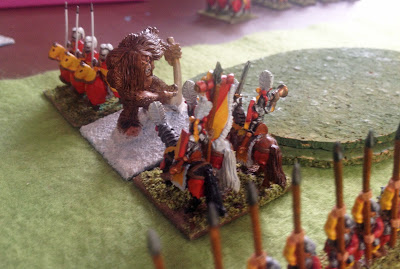 All over for the Ceidonians. 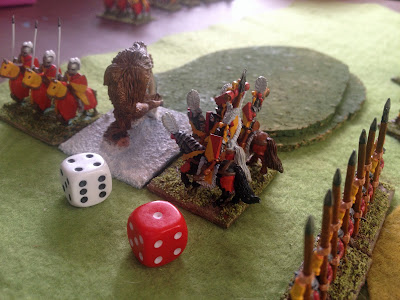 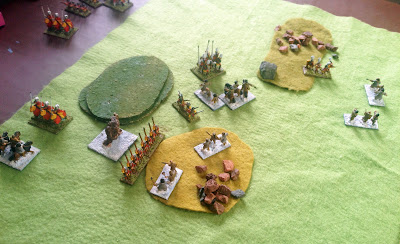 There were no key lucky moments in this game. Both armies got reasonable rolls in combat, and the Ceidonians could have pulled off a win had the dice swung slightly more in their favour. They set up a few likely kills, and any of them would have opened up the game for them. To some extent the Wildlings were mostly on the back-foot, having to redeploy in the face of the concentrated Ceidonian attack. So, all in all, the game turned out better than I thought it would.
Posted by Kaptain Kobold at 21:13