Many years ago I picked up a pile of HOTT armies on a bring and buy - and when I say 'many years' I mean 'back when I was living in the UK'. It seemed like a good purchase at the time, but when I got them home I realised that what I'd bought was a pile of badly-painted and very unexciting miniatures. They went into a box where they have remained ever since.

Until the other week, when I was looking for something else, and came across them again. Maybe I've mellowed with age, but I felt sorry for them, and decided to salvage at least some of them. A good proportion of them were medieval knights and foot-soldiers, so I decided to tidy up or redo the painting on them, and assemble a basic army out of what I had. A simple medieval European HOTT army is always worth having in one's collection, after all.

Then I started reading the army lists for David Brown's in-playtest 'Last Stand' fantasy rules. Two of them covered the mythical medieval king Prester John, and I was inspired to change the direction of my repainting project.

Prester John was a legendary Christian patriarch and king popular in European writings and legends during medieval and renaissance times. He was said to rule over a mighty Christian nation, lost amid the Muslims and pagans of the Orient or, in later writings, Africa. The legends seem to be based on accounts of isolated Christian groups beyond Europe, both in India and in Ethiopia, inflating them to mighty empires which would ride up and aid Europe against Muslim and pagan invasions.

I decided to switch my army to Africa, but go down the medieval route of assuming that they'd still mostly look like medieval Europeans in terms of weapons and armour. Essentially I did a core medieval European army, but gave all of the troops dark skin, and added in some native troops and elements for local colour. 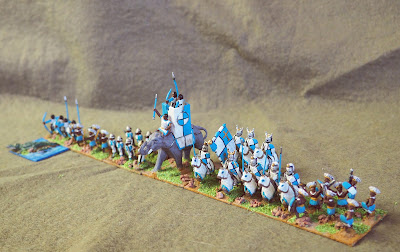 Here's Prester John himself, and his noble knights. The original figures had this blue and while colour scheme, but with some additional jarring purple as well I de-purpled them, and tidied up the rest. 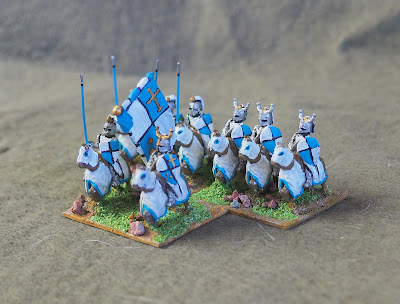 The blades. They are made up of those terrible figures that have a bent sword cast across the face that's almost impossible to cleanly cut away without hacking the figure about. 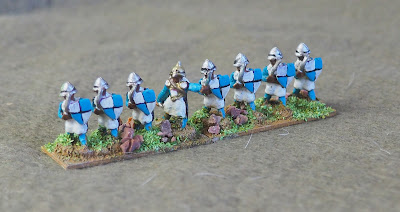 The elephant. Because who doesn't want an elephant in their army? It's from HAT's 20mm Carthaginian range; oversized for 15mm, but suitably heroic for an elephant in the army of a legendary figure like Prester John. The crew are more of those wonderful medieval figures, though. 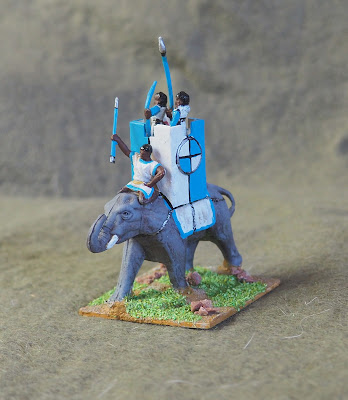 Archers. The 'regulars' are a mix of spearmen and bowmen, but count as shooters for HOTT. There was only one element of archers in the  collection, so I mixed them with an element of spearmen to stretch them out a bit. Then I only used on of them in the finished army. There's still room for expansion. The irregular archers are some 15mm Tupi I had going spare. Not African, I know, but the average medieval chronicler wouldn't care, and neither do I. 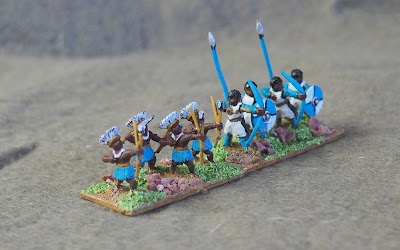 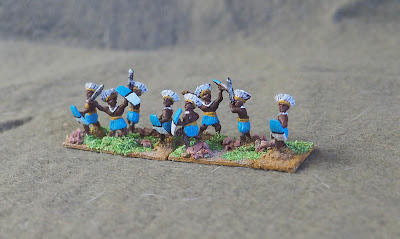 Crocodiles. Nothing says Africa like crocodile lurkers. And, again, they were going spare. 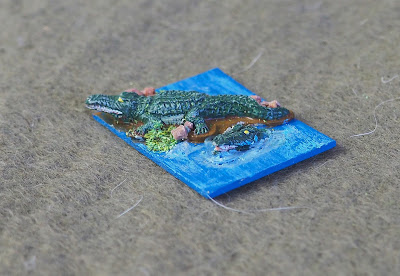 Now let's see how they fight.
Posted by Kaptain Kobold at 14:28