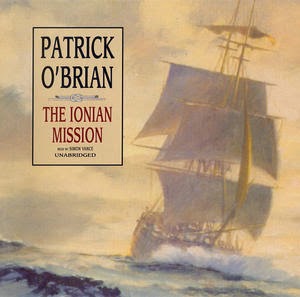 This scenario is based on an action described in the novel 'The Ionian Mission' by Patrick O'Brian. It was originally written for the first edition of the 'Form Line Of Battle' miniatures rules, but I have updated it to fit in with FLOB 4.0/5.0.

Obviously if you've not yet read 'The Ionian Mission' then this scenario is loaded with spoilers.

There's a refight at the end of the post.


Background To The Action

In an unknown year towards the end of the Napoleonic Wars, Jack Aubrey is in command of the 28 gun frigate HMS Surprise. He is sent on a mission to force the French out of a port on the Ionian Sea, and involved in negotiations with a minor Turkish ruler. The ruler captures Jack's transports and set out to sea to assert his authority. Jack puts the Surprise onto a southerly course to intercept the Turkish ships.

The Torgud mounted a pair of heavy cannon which gave its broadside an extra punch, but which hampered its sailing qualities. It therefore moves at Frigate speed but turns as if it were a ship of the line (2 points per movement phase). The heavy cannon can be used three times during the game, their use being declared before the dice are rolled. Each use adds one to the Torgud's fire factor for that shot.

Use a table approximately 6' x 4' with the N-S axis being the longest.
The ships are as follows:
S - Surprise
T - Torgud
K - Kitabi

The wind is from the South East.

Torgud and Kitabi should be lined up about 15cm apart heading NNE and about 15cm from the Southern edge of the table.

The Surprise lived up to its name and initially caught the Turks unawares. To simulate this the following special rules apply. The Turkish ships may not deviate from their initial course or fire until the phase after they are fired on or until they become alerted. They may only move on one dice although they still roll the 4 dice their attitude to the wind entitles them to. In each Turkish command and repair phase roll a dice. If the score is 5 or more the Turks are alerted. Add one to the score if the Surprise is within 20cm and 2 if it is within 10cm of a Turkish ship. On all following phases the Turks may fire and move normally.

It is recommended that the optional rul for Poor crews turning more than one point be used.

The Surprise initially engaged the Torgud in attempt to mask the fire of the Kitabi. After a fierce exchange of fire, the Torgud attempted to close on the Surprise in order to board, but was out-manouevered. This left the Surprise in a position to engage the Kitabi instead, forcing it to disengage. Both Turkish ships ran to the North West with the Surprise in hot pursuit. Kitabi and Torgud collided in their haste allowing Jack to use the corvette as a bridge to board the frigate and capture both vessels.

I first developed this scenario more than ten years ago, and have played it a few times over the years. It's actually a tricky one for the British, as FLOB can sometimes be a bit random, leaving their one ship vulnerable to a couple of unlucky rolls or card draws. But, I guess, that's how the fortune of war works.

I played this game using my ancient Navwar 1/1200th ships.

Here's the Turks, sailing along blissfully unaware that their treachery has been discovered by the British. 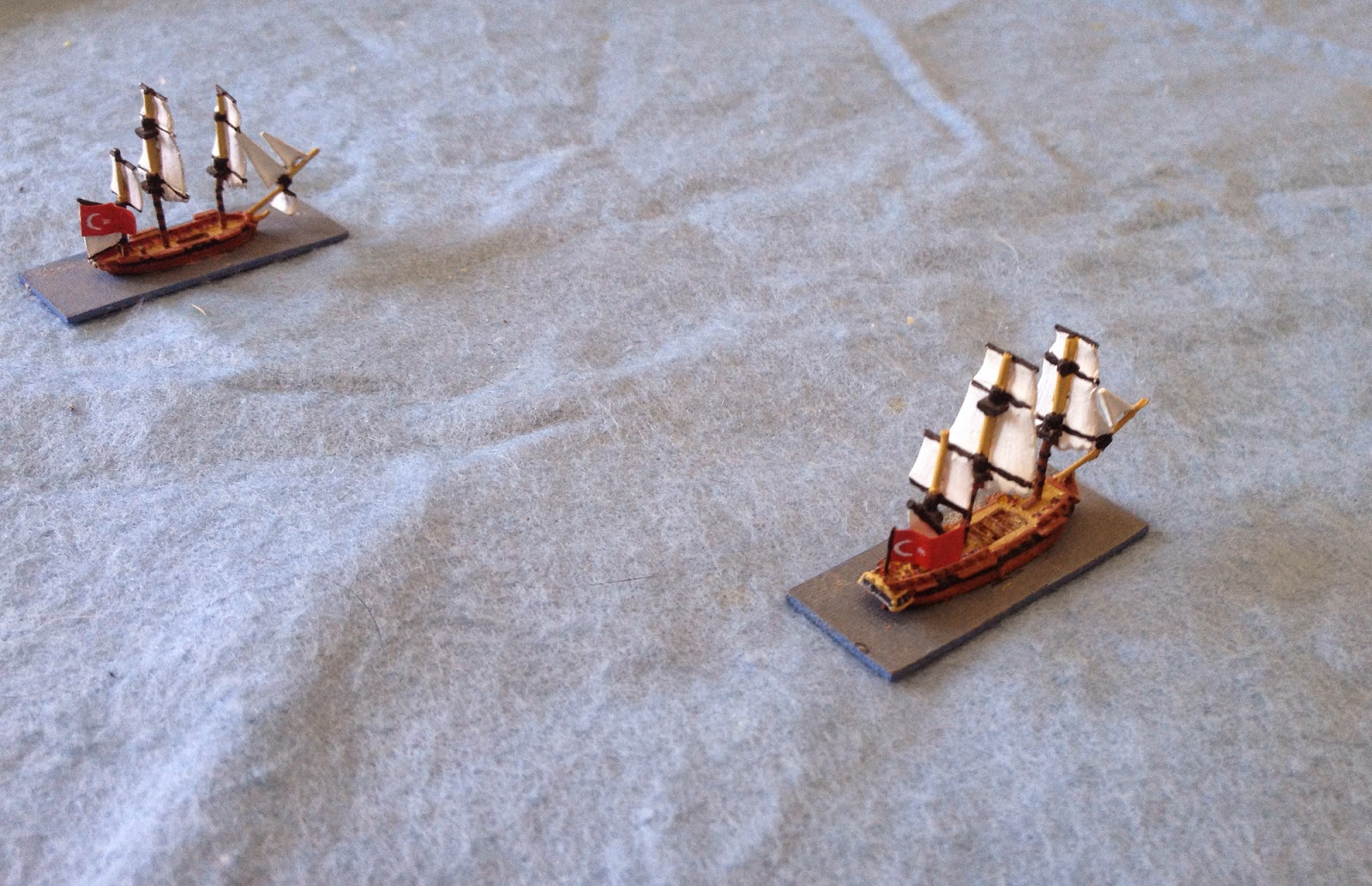 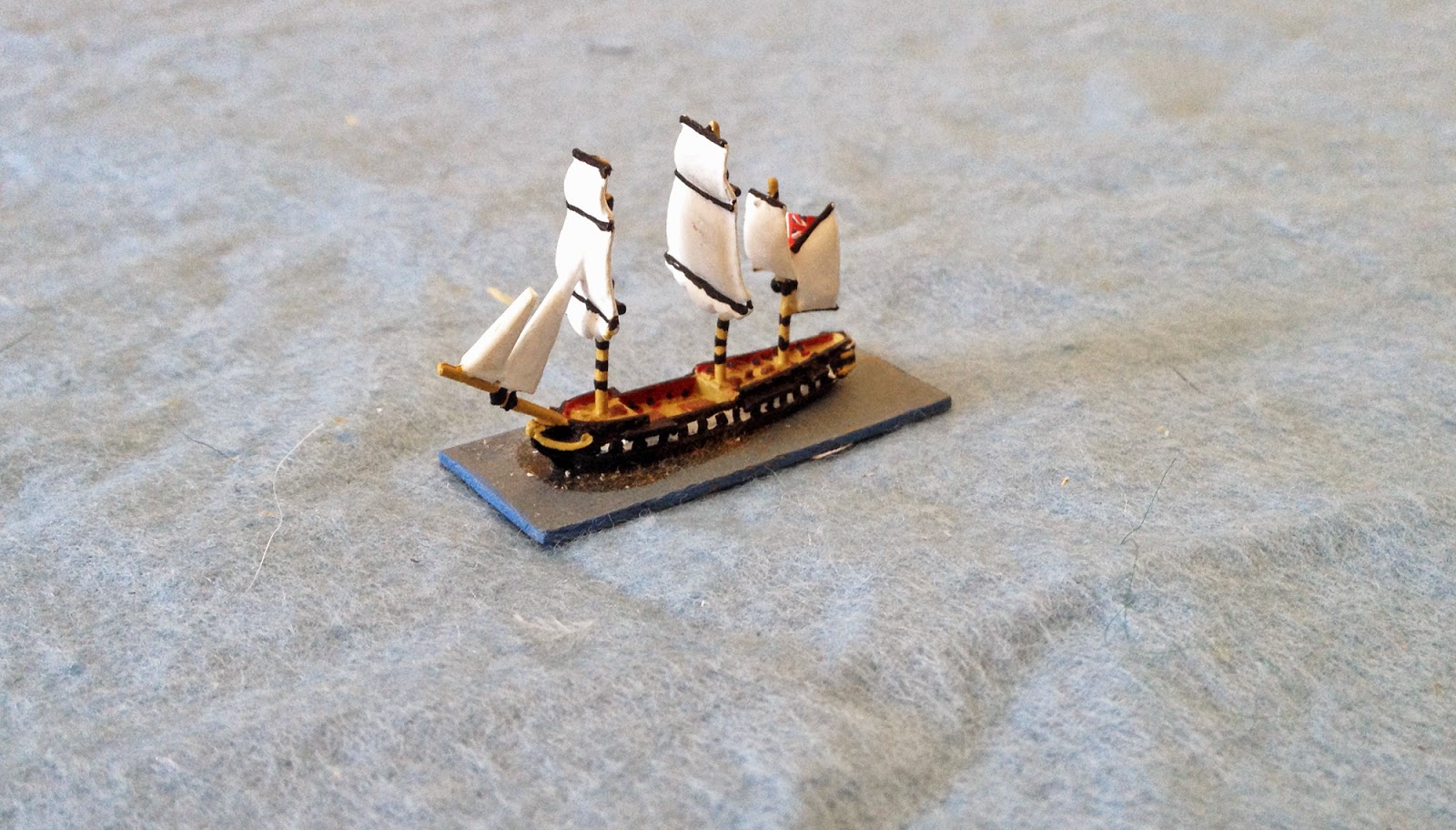 The Surprise suddenly turns downwind and fires a devastating initial broadside along the length of the Torgud. 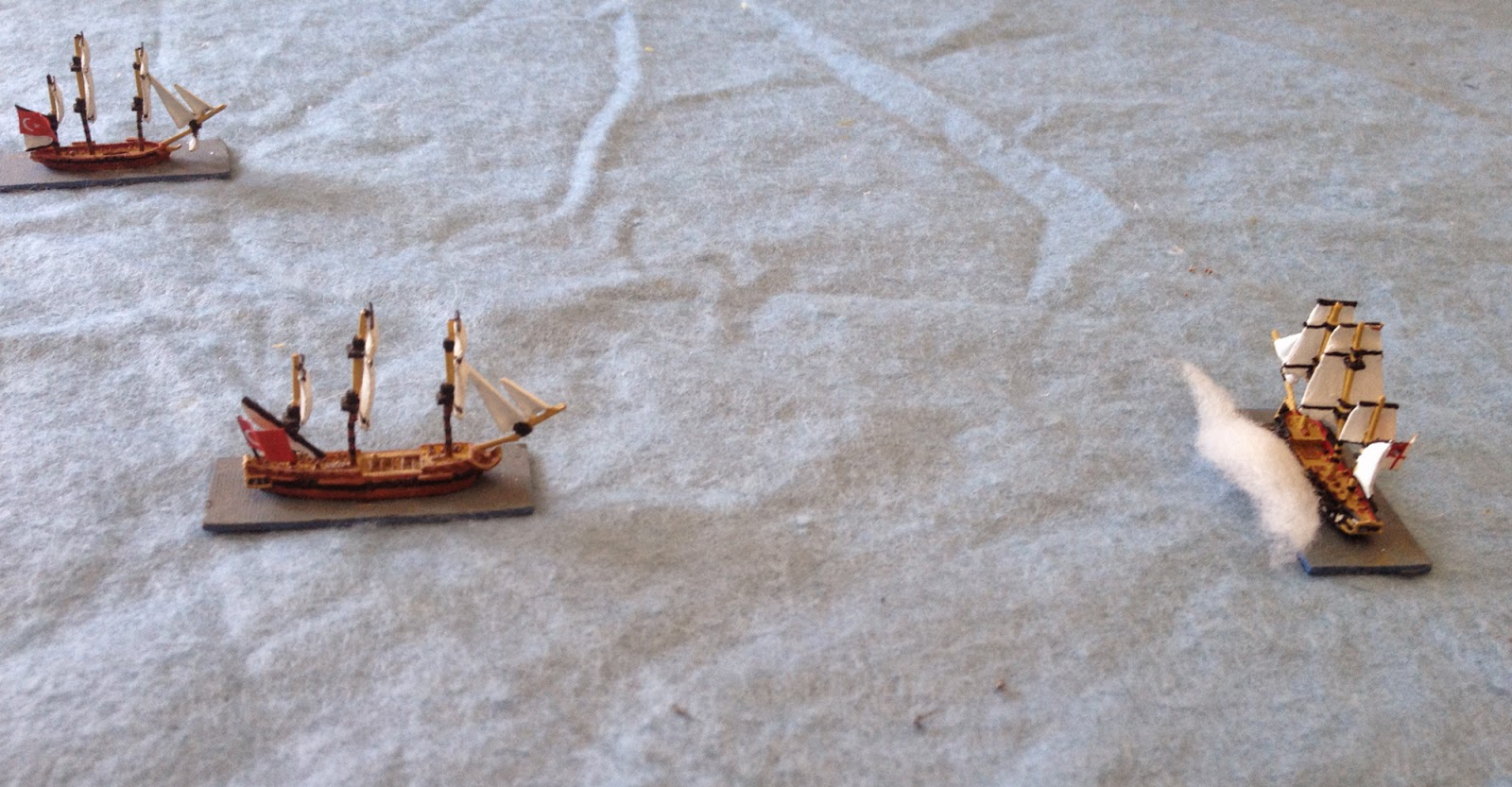 With the Torgud damaged, Surprise turns on the Kitabi, but she manages to cut across the bows of the British vessel. The Surprise is damaged, but poor Turkish gunnery means that it's not too bad. 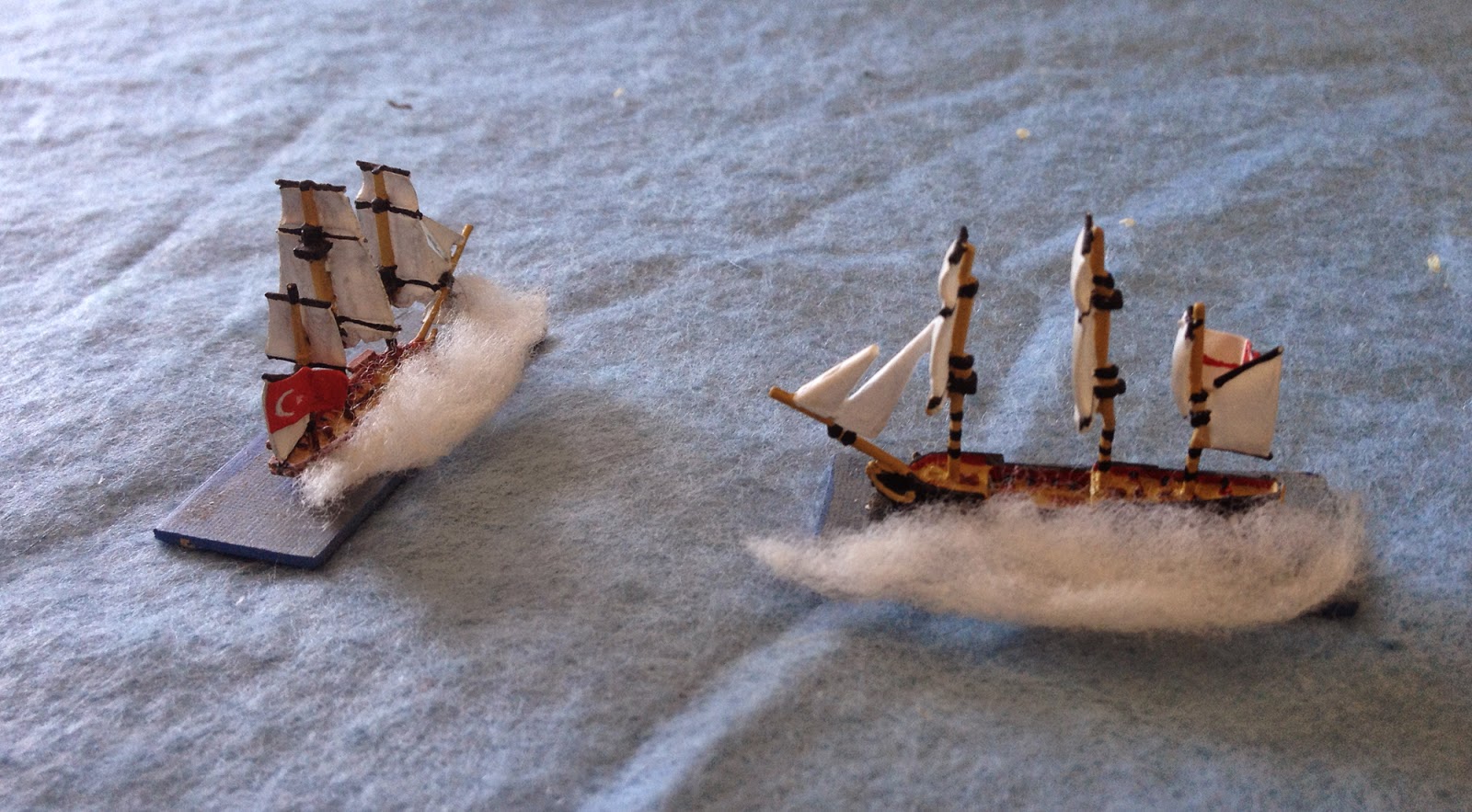 The Torgud tries to turn back into the action, but damage and the heavy guns means the ship is unwieldy and it's slow going. 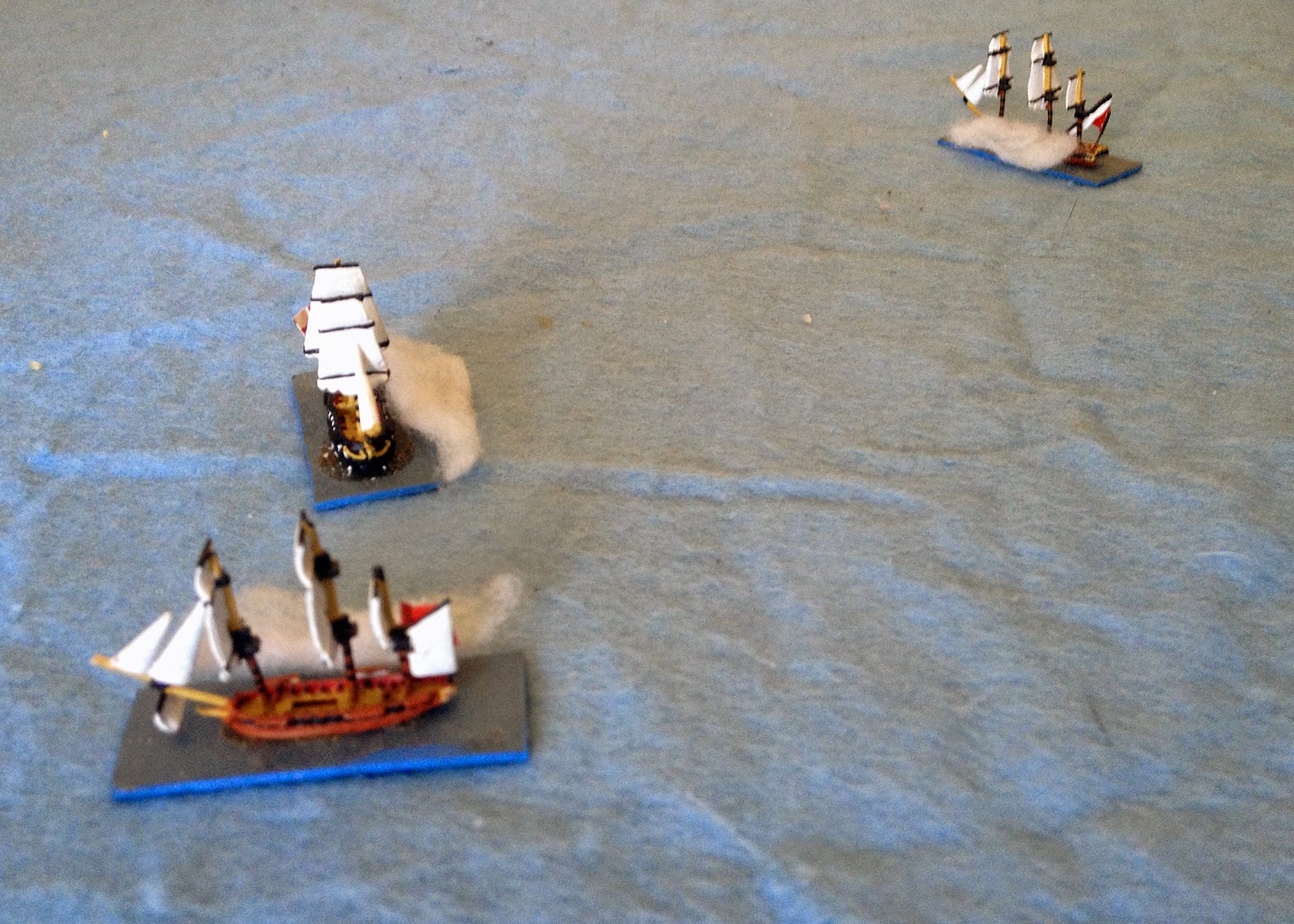 As the Kitabi turns the Surprise cuts tight under its stern, and fires its previously unused starboard guns. In a single broadside, Aubrey's well-trained crew smash the Kitabi, forcing it to strike. 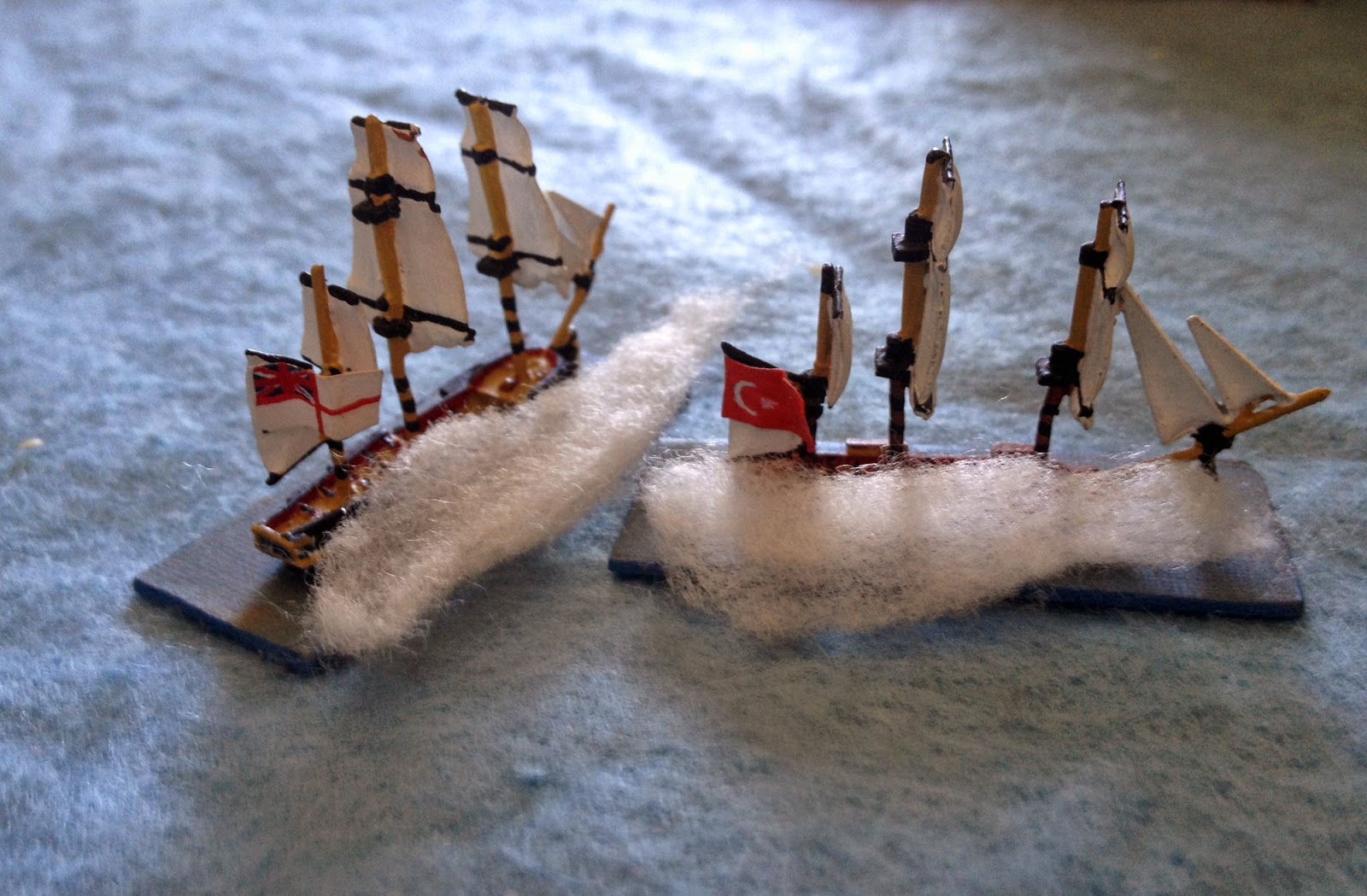 Whilst the Kitabi drifts, the Surprise and Torgud close on each other. 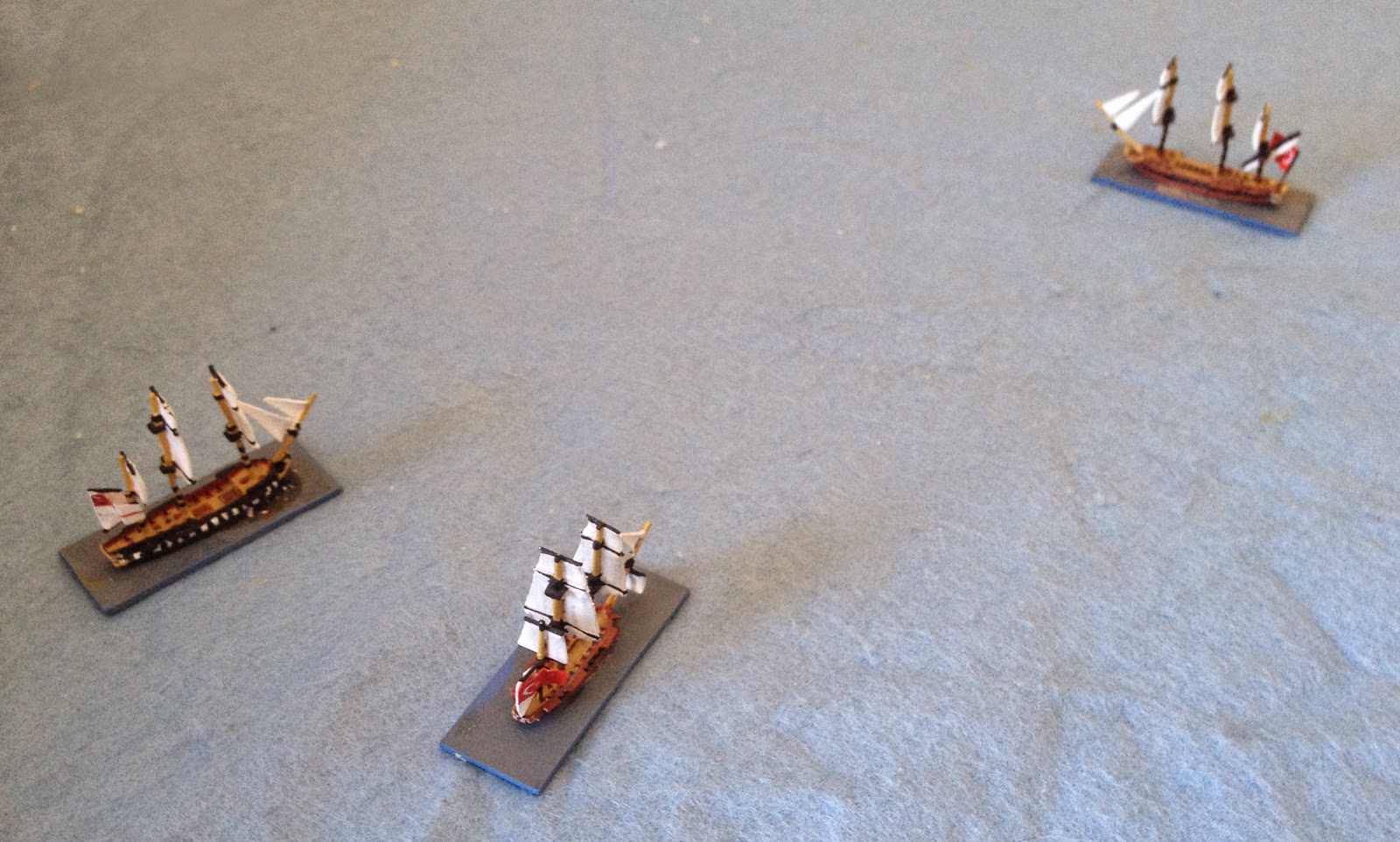 Another devastating broadside from the Surprise. 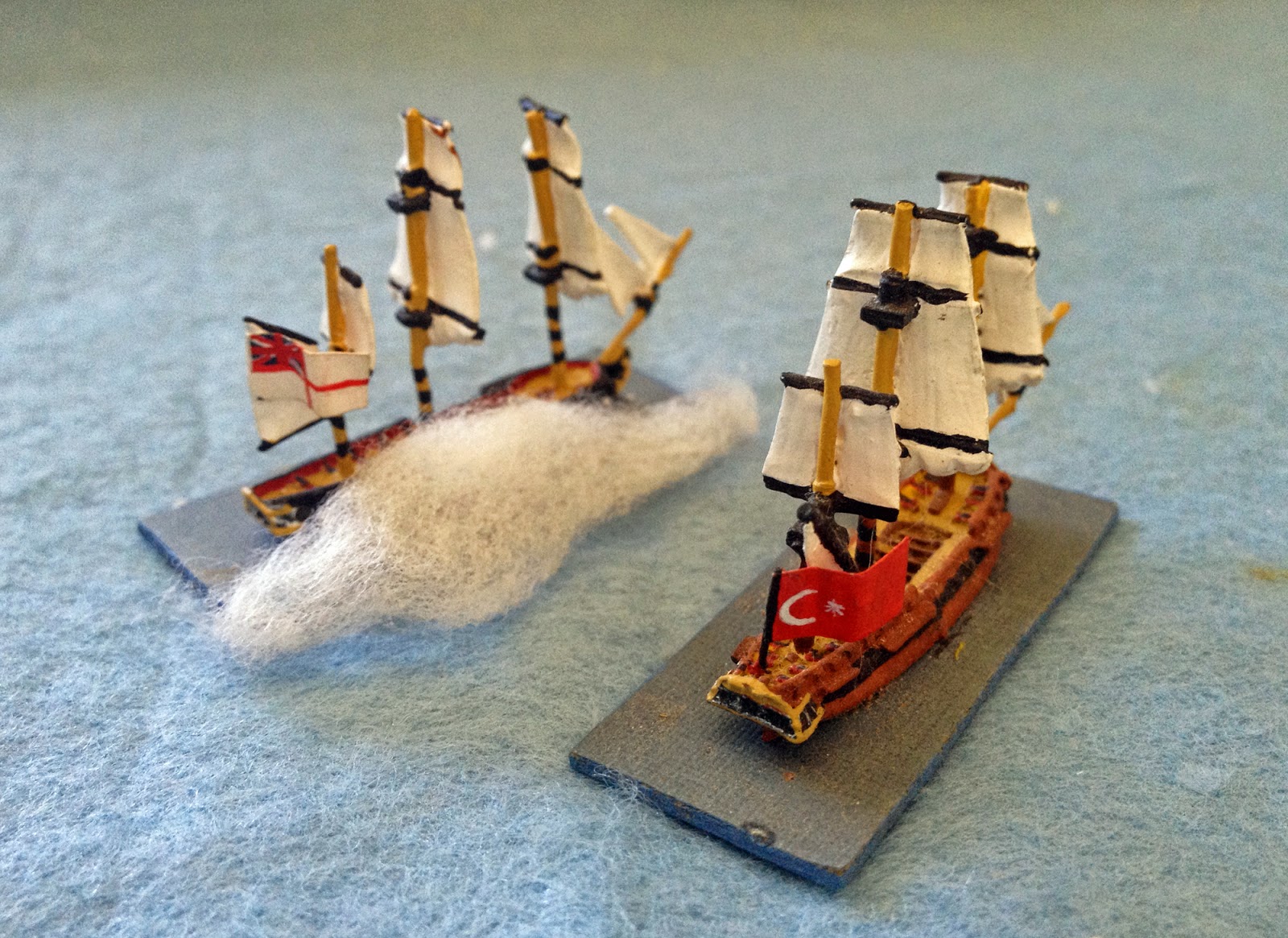 The Torgud returns fire, and starts a fire on the British ship. 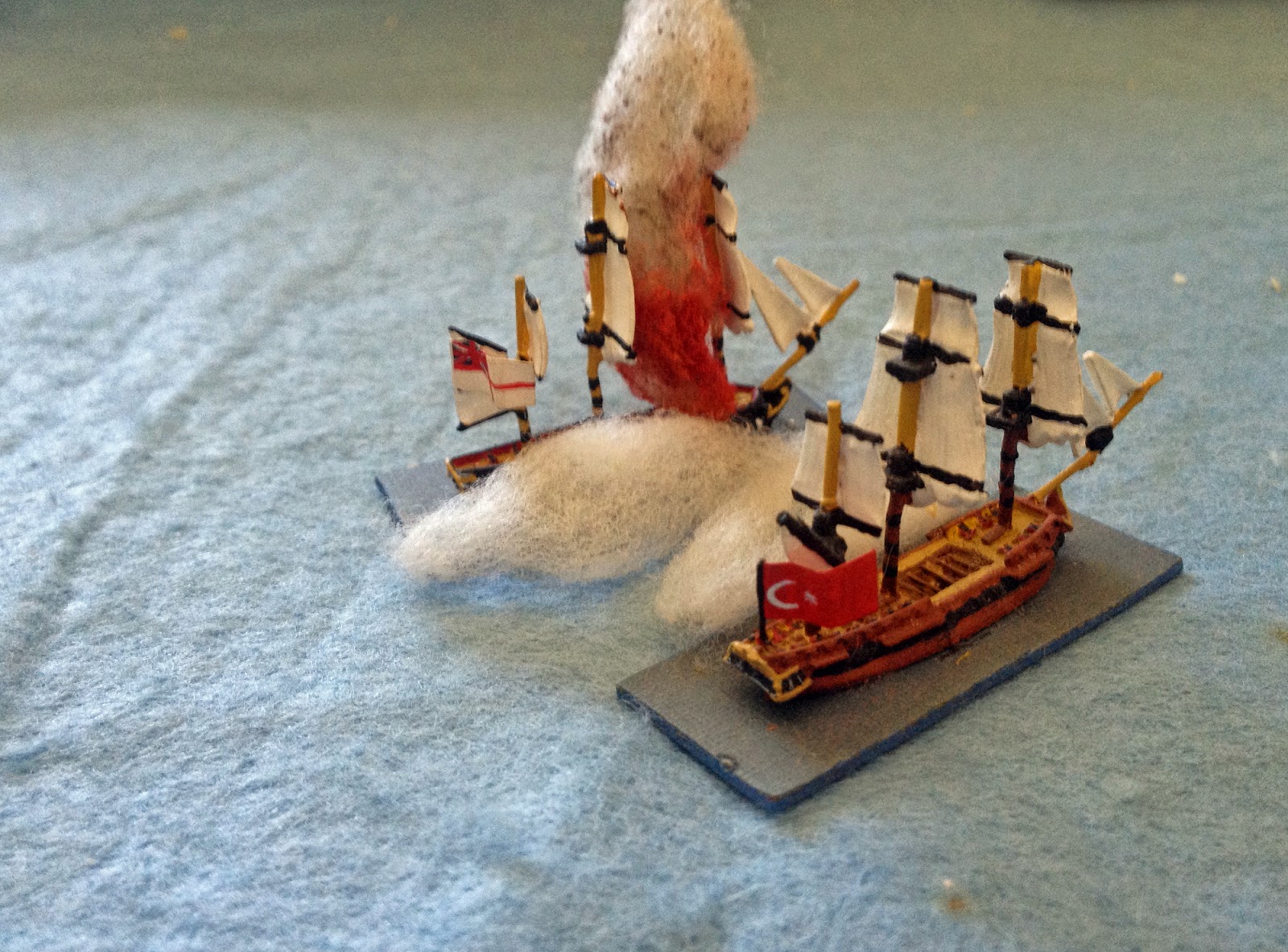 However the elite British seamen are well-drilled in extinguishing fires, and the Surprise fights on. The Torgud almost manages to cut across the British vessel's bows, but the Surprise turns to avoid this, and a final exchange of broadsides sees the Turkish ship strike. 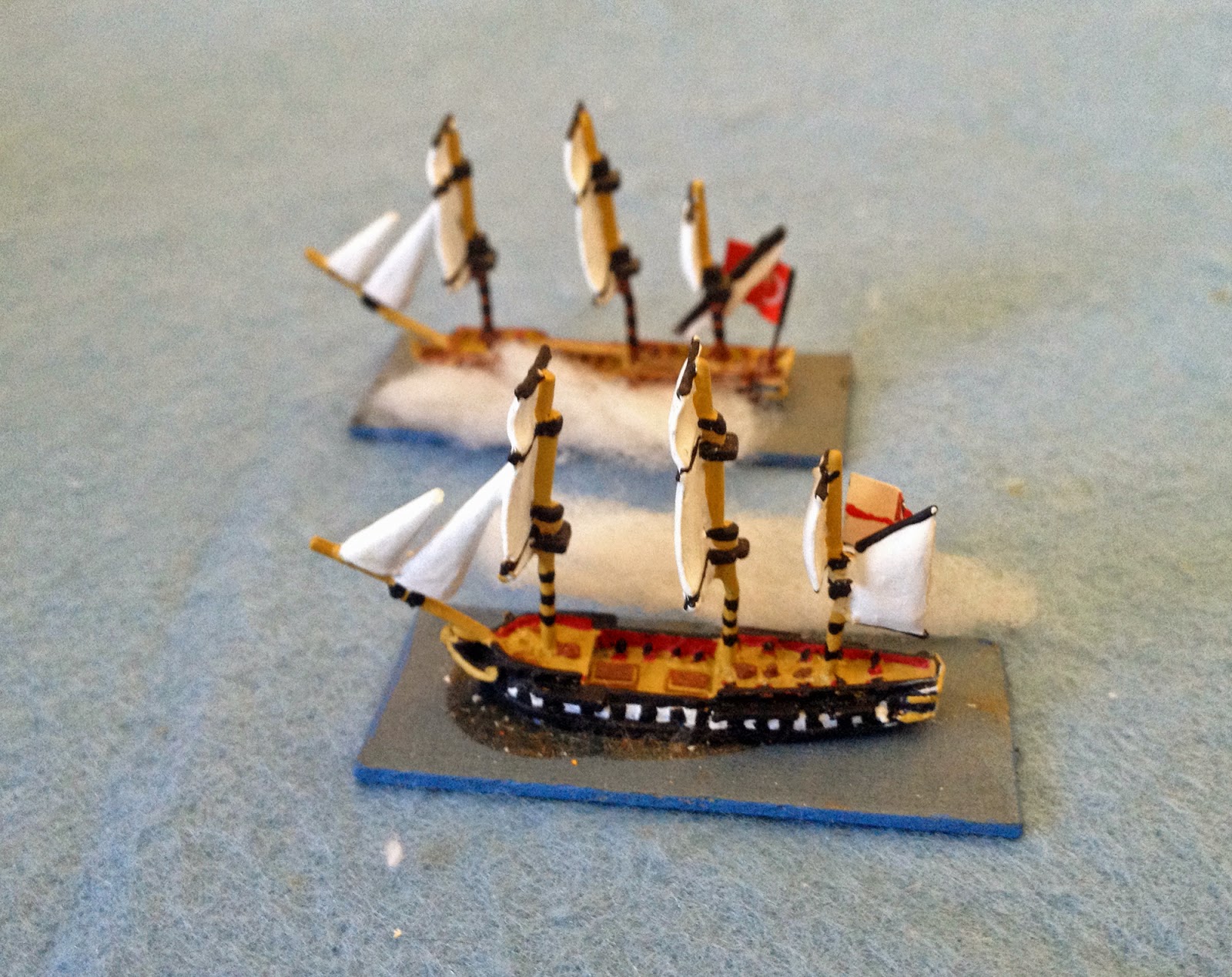 In fact at the end of the game Surprise only had one broadside factor remaining, but the with Torgud in a similar state it was always going to boil down to the massive difference in crew quality; the effect of Torgud's larger size had already been neutralised by the damage it had taken earlier on in the battle. The British victory was helped by being able to knock the Kitabi out of the fight in one shot, avoiding a sustained engagement there.