Best Game Of Maurice EVER

As you may have guessed from previous posts, Caesar and I played Maurice last night.

We used my Risk-figure Great Northern War Swedes and Russians - the Swedes had seven infantry, four cavalry, two artillery, Great Captain, A La Baionette and Cavaliers, whilst the Russians has nine infantry, four cavalry, three artillery and Maison Du Roi, which was used to upgrade two of their infantry to guard status. Aside from the guards, all troops were trained. Caesar took the dashing Swedes, whilst I took the stolid Russians.

Caesar won the scouting, and opted to defend. We ended up with a sparse terrain in what the terrain card claimed was the Tropics, but which we assumed was a forgotten part of the Steppes.

And so the pictures begin - click on them to make them bigger.

The armies deployed, with the Russians deployed in the foreground. The Russians were conventional; multiple lines of infantry. Caesar deployed the Swedes in his favourite march columns, aiming to get them where he wanted as quickly as possible. He's very good with march columns. 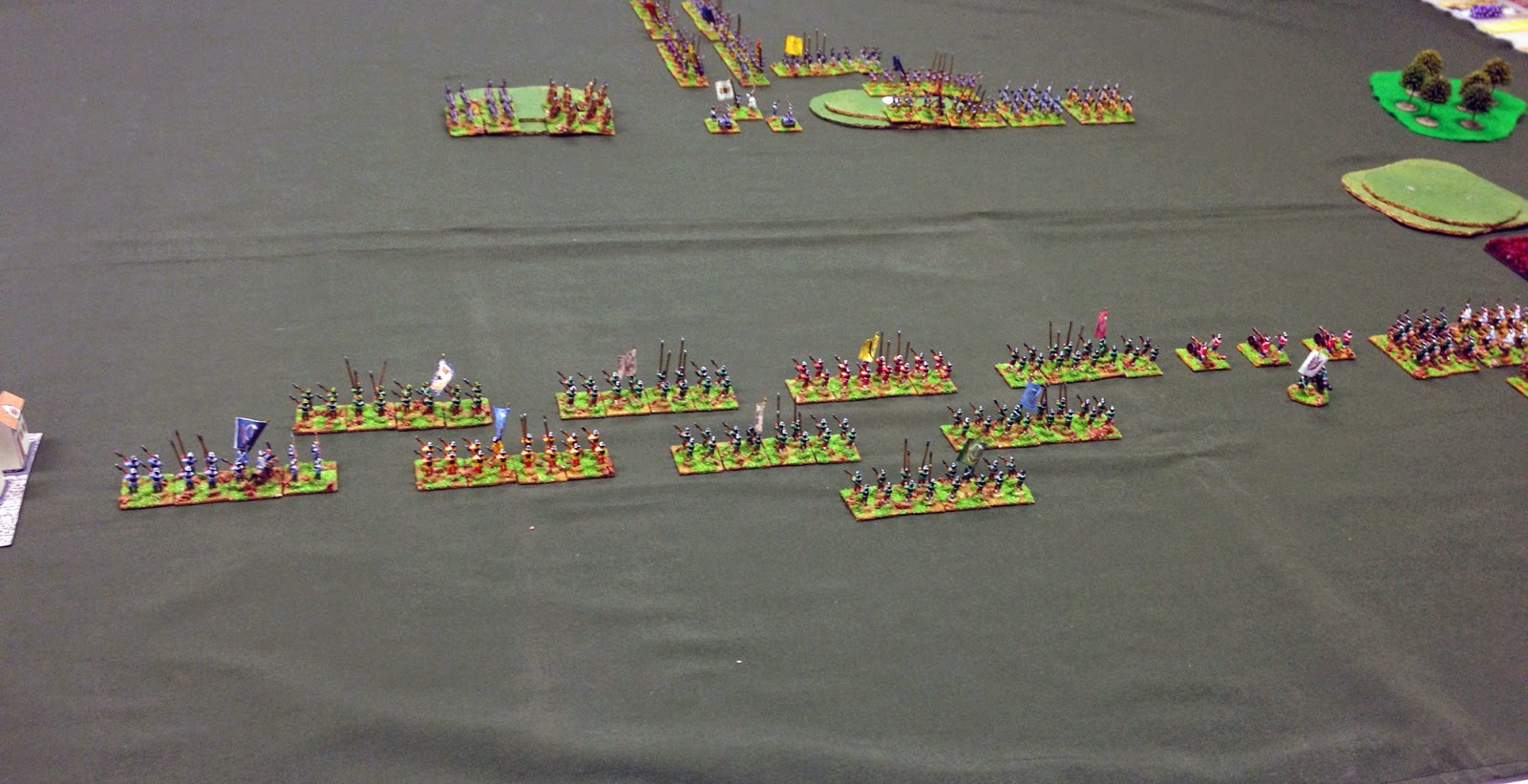 Heroic Russian infantry. Peter the Great decided to confuse the Swedes by putting his guard infantry on the left. Cunning. 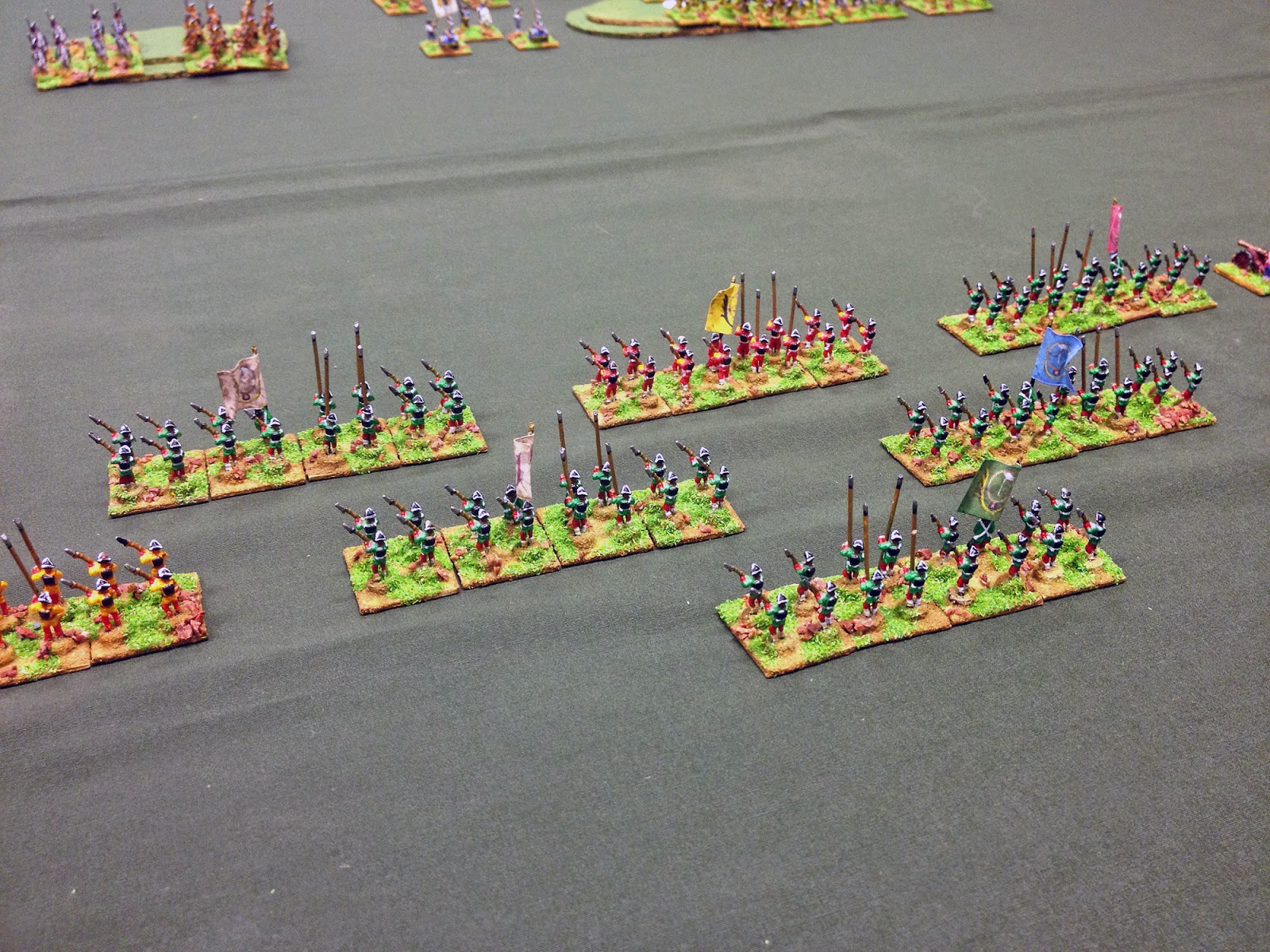 The Swedish cavalry was split between the two flanks, whilst that of the Russians, which included two units of mercenary Cossacks (because that's what you get when you're the attacker in this game) was massed on their right.. 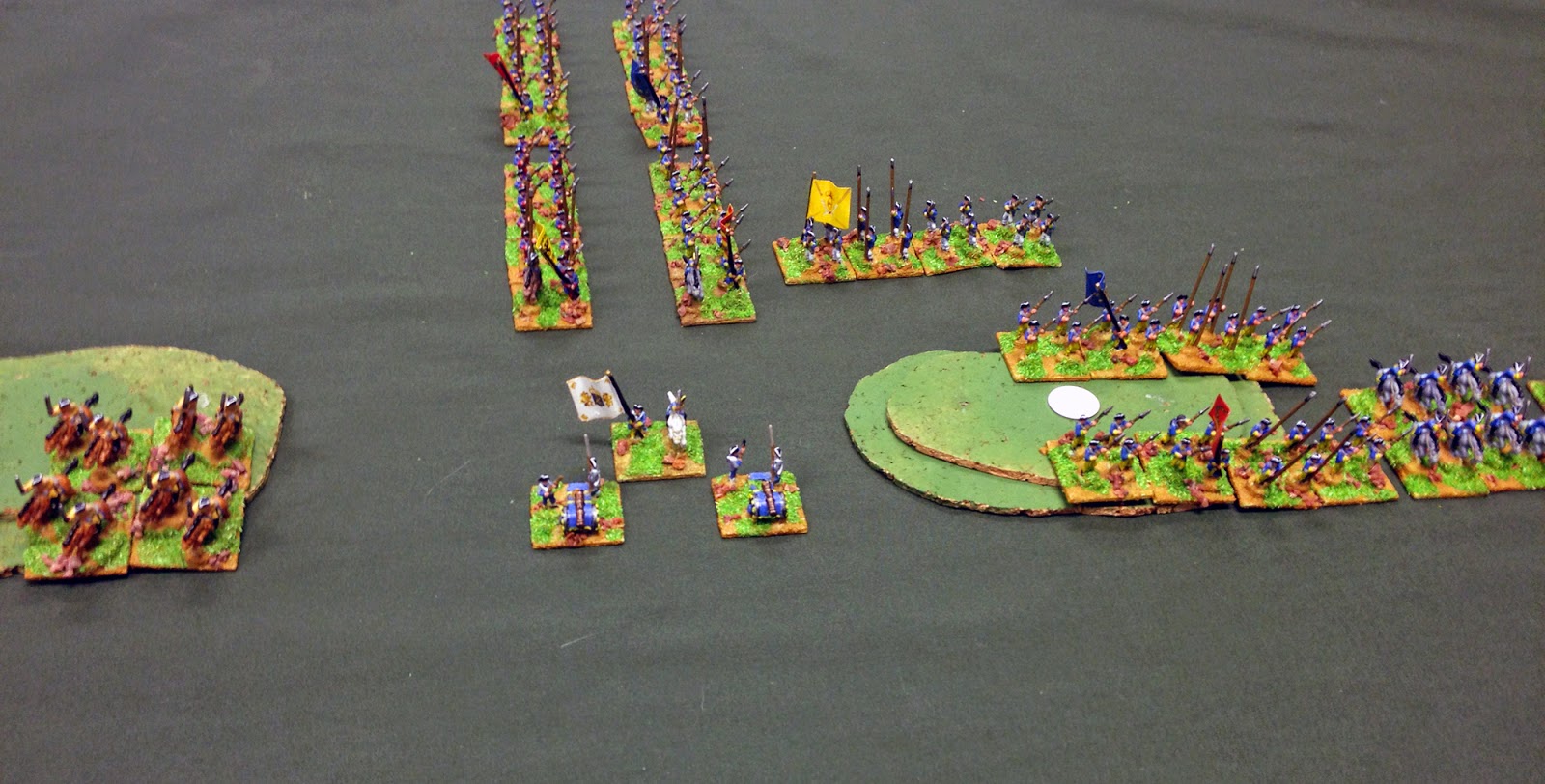 Here's the Russian cavalry massed on the right. 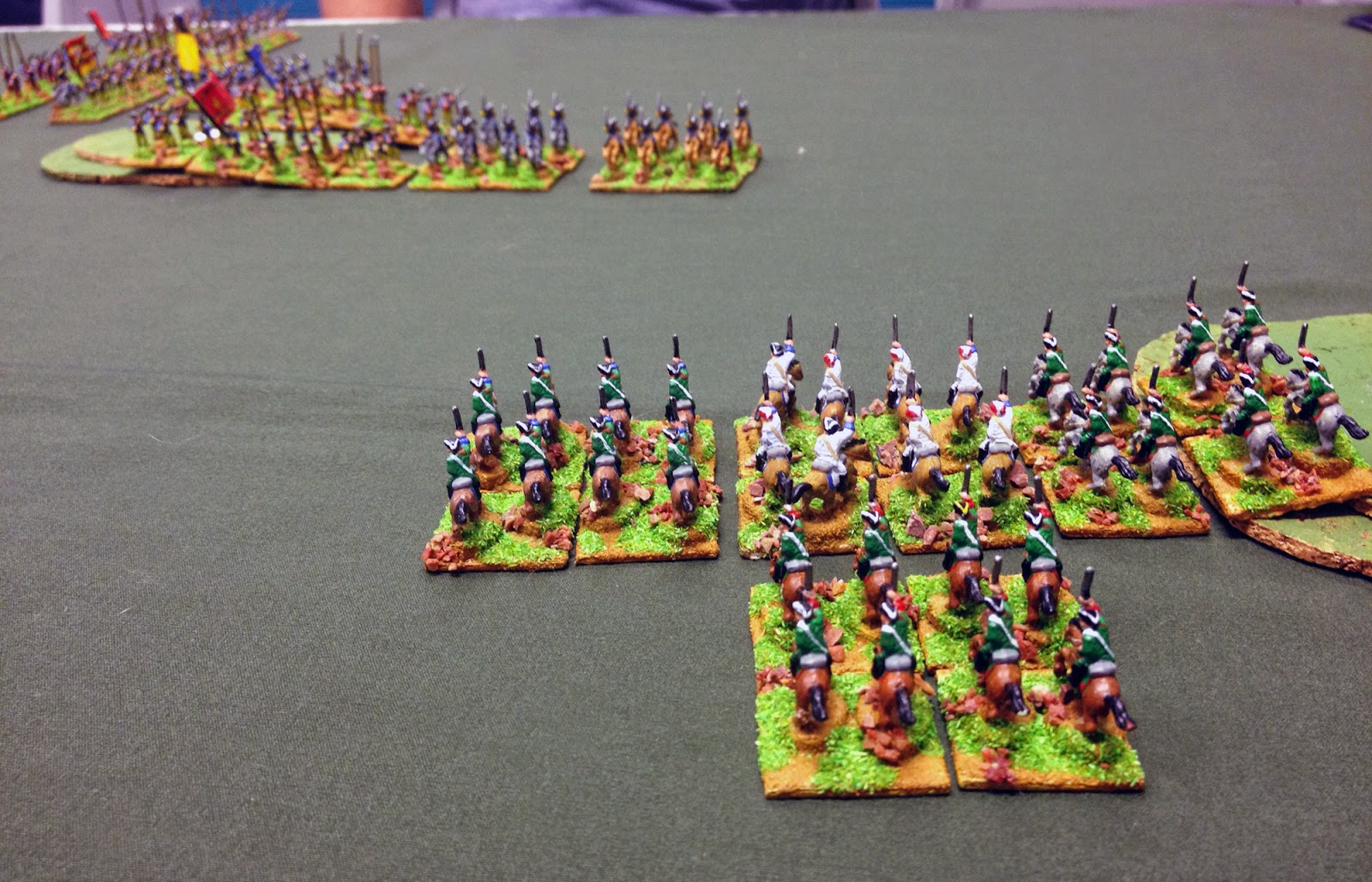 And, because I was running the Russians, it was the cavalry which lead off the attack. And - because it's traditional - the initial cavalry attack ran in to an unexpected area of marshy ground. If Maurice is to be believed, 18th century Europe was riddled with unmapped marshland. 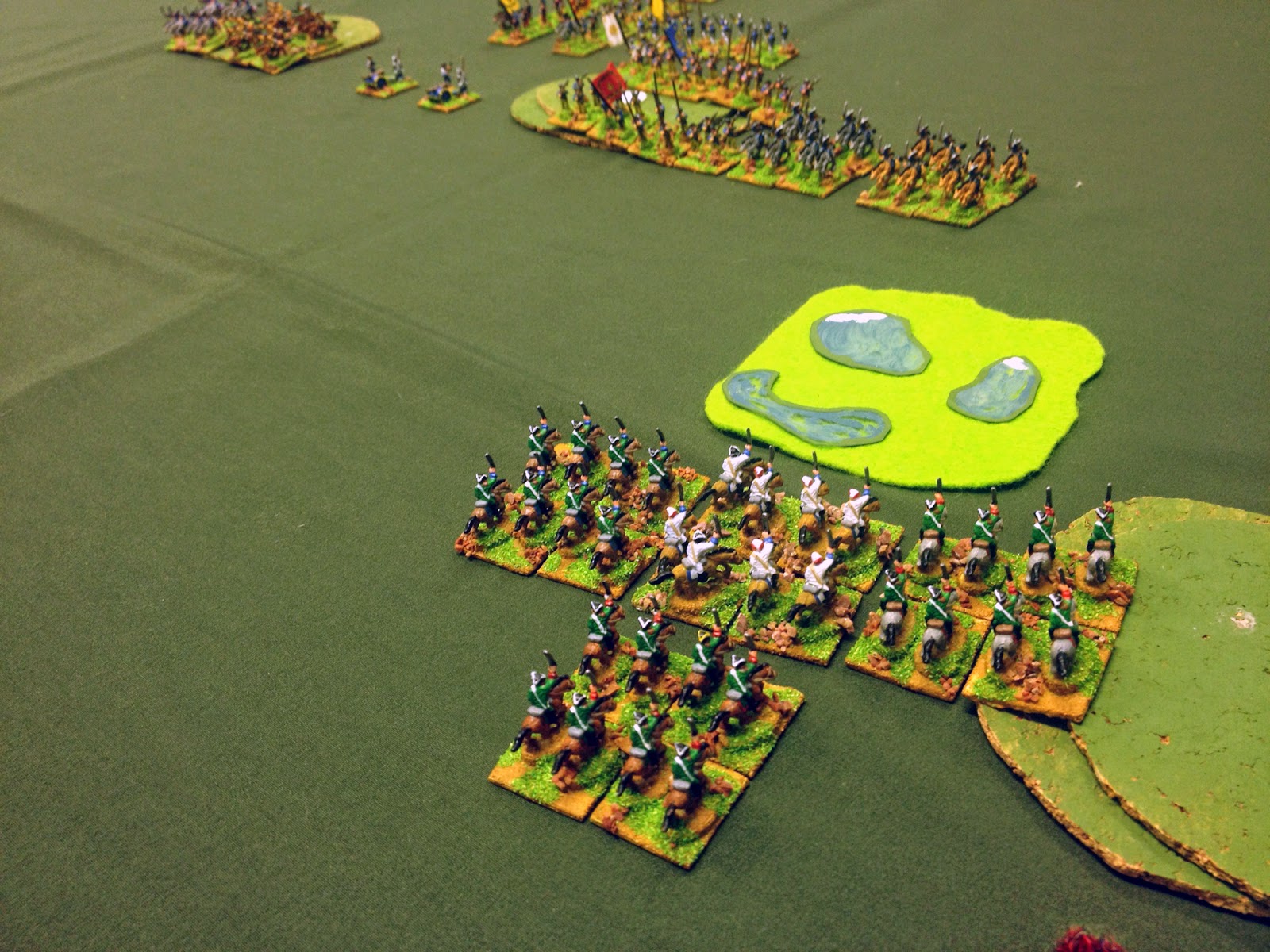 Marsh? Pah! The Russians rode straight through, hitting one Swedish unit with two of their own. The Swedes fought back, drove the Russians back into the bog and then sabred them all. To death. 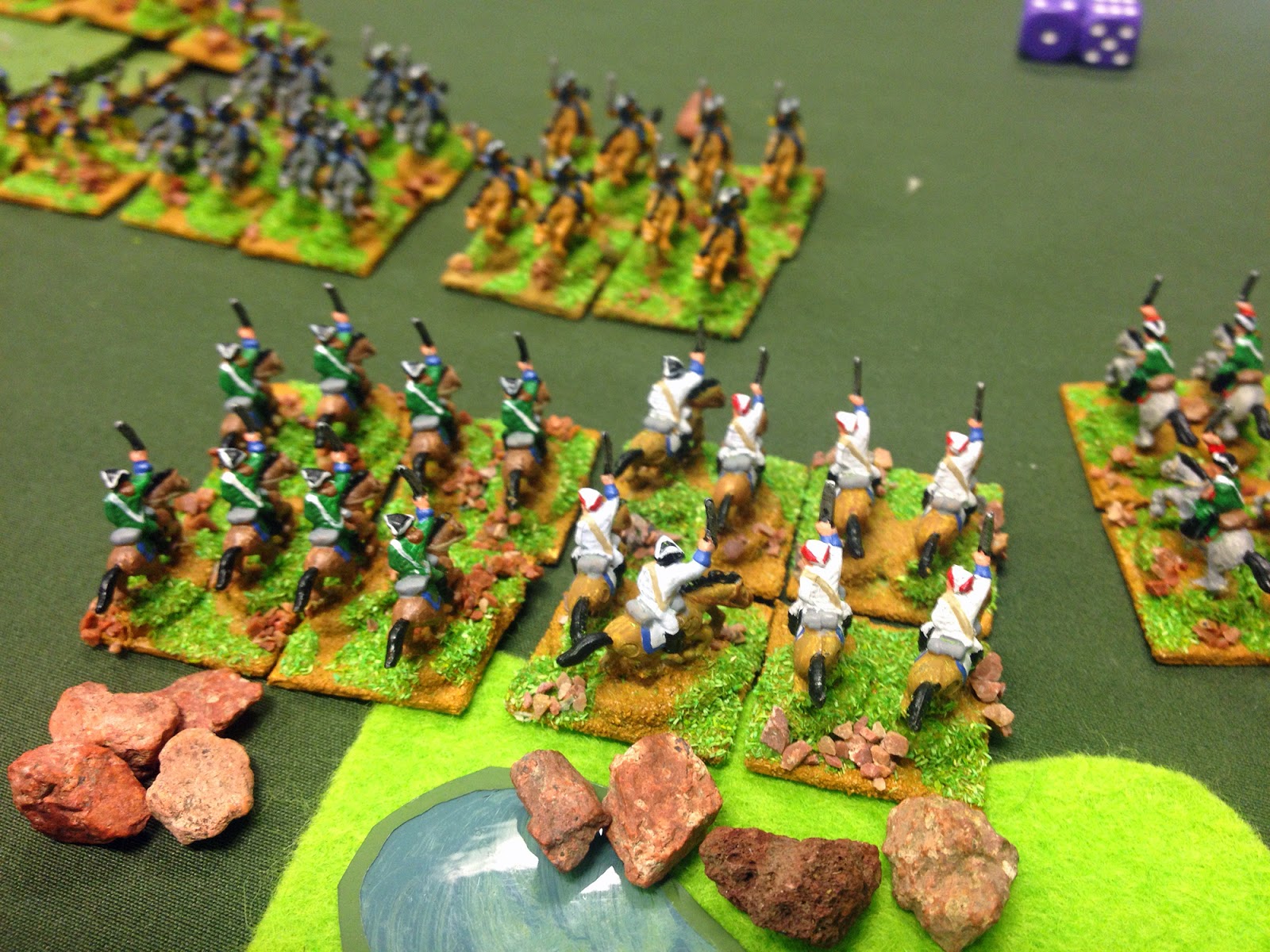 Ten minutes into the game and I'm two cavalry units down, and my right flank has a great big gap in it. I decided to switch the focus elsewhere, and advanced my entire infantry line. The infantry probably sang some stirring Russian song as they plodded forward. More importantly they brought some of Caesar's columns into musketry range, forcing him to react or have them cut to pieces. 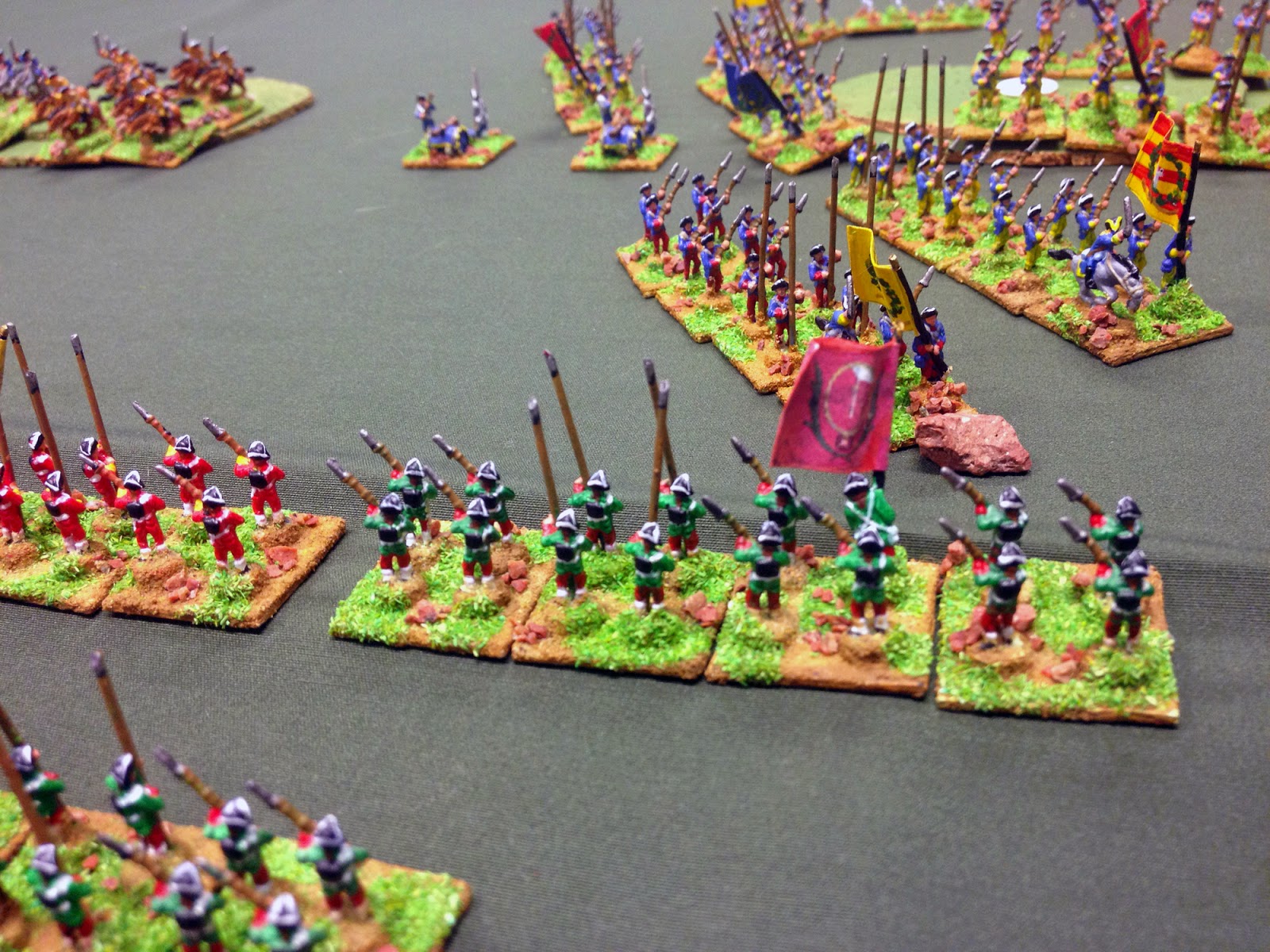 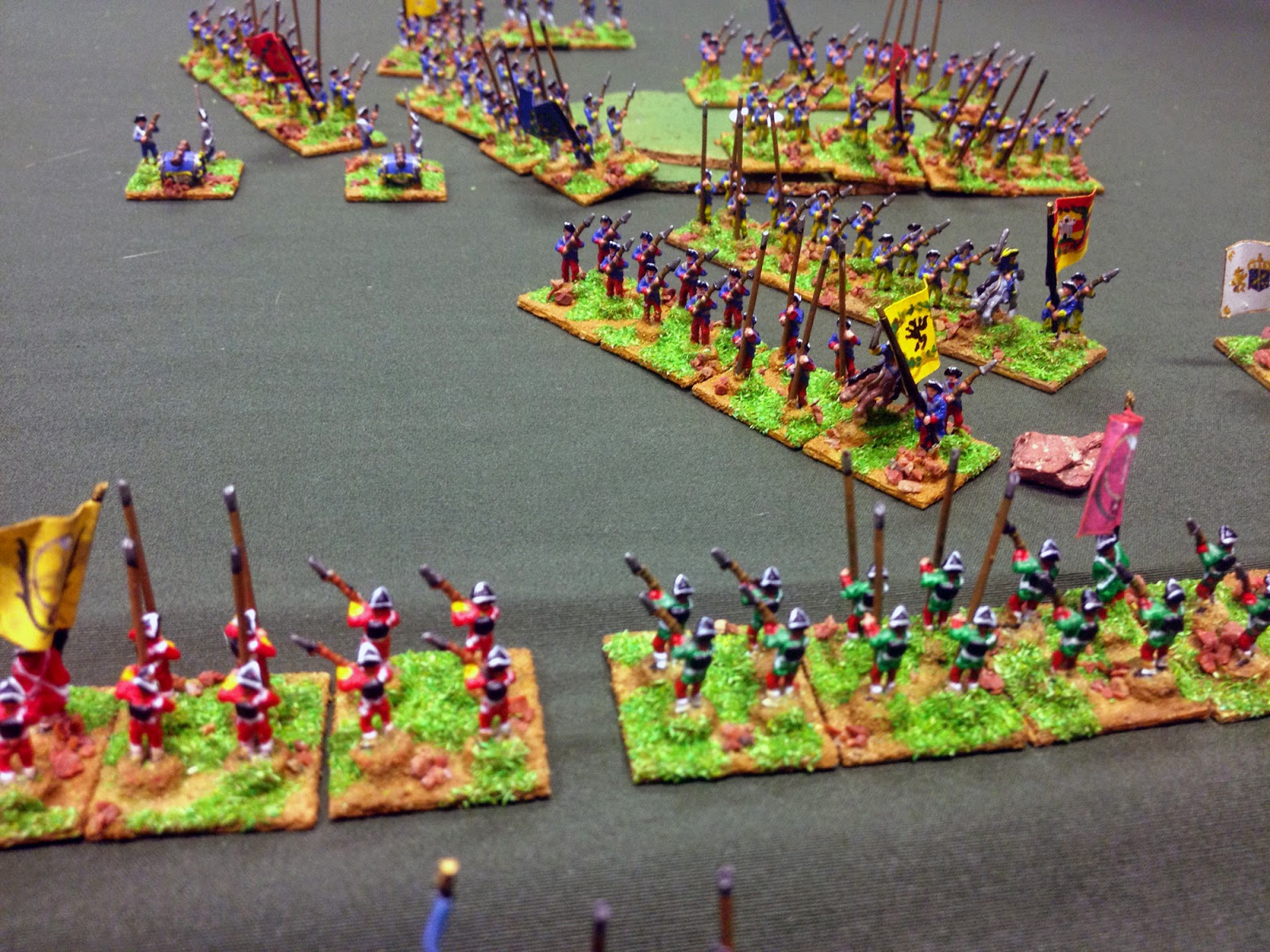 The Swedish cavalry had a go at the Russian guns. despite being bombarded they got within charge reach. But who is that hovering on their flank? My goodness! Cossacks! 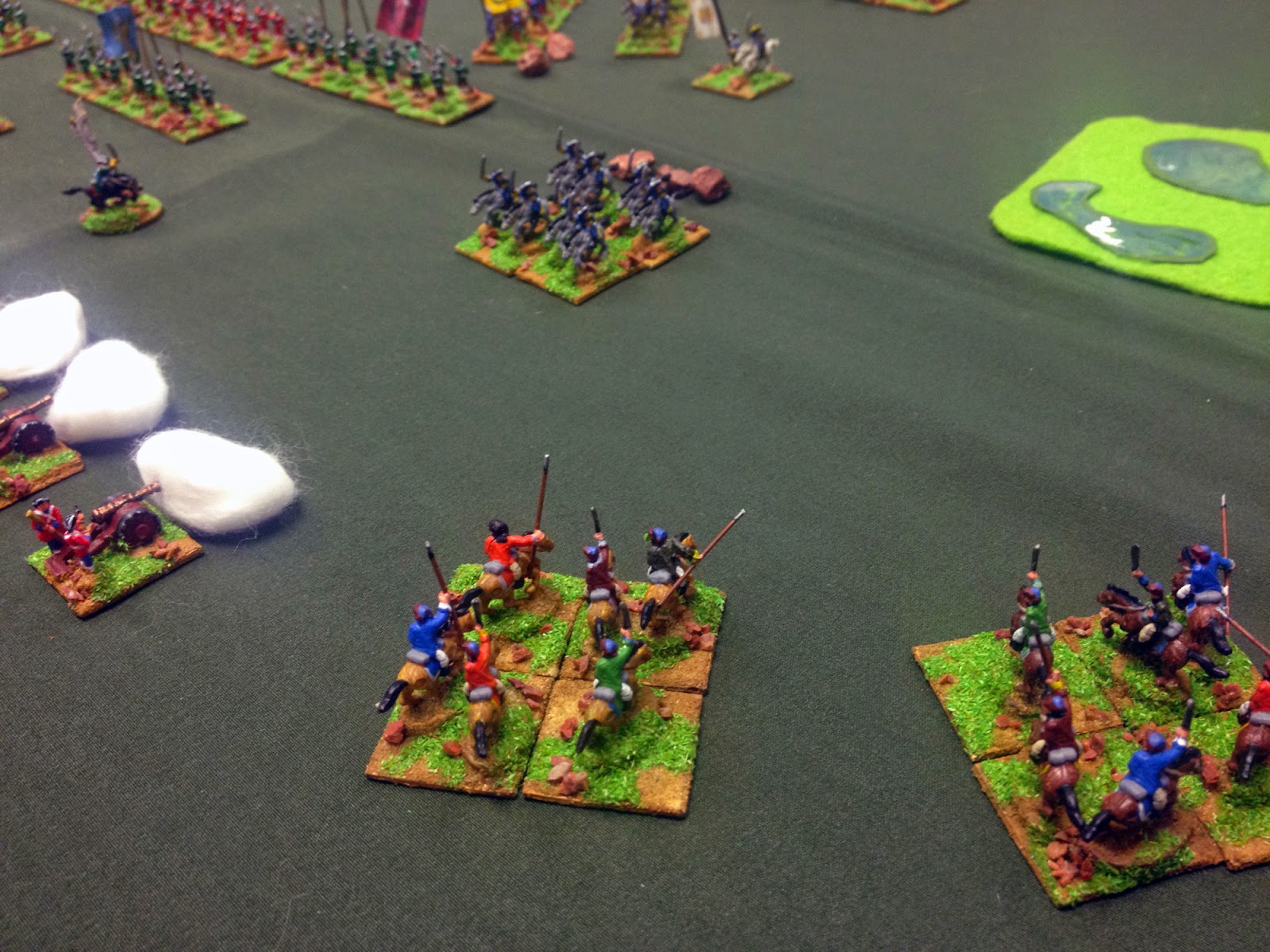 For the first time ever my beautiful Cossacks charged into action and defeated a disordered, flanked and outnumbered enemy unit in a display of great heroism, saving the Russian guns. 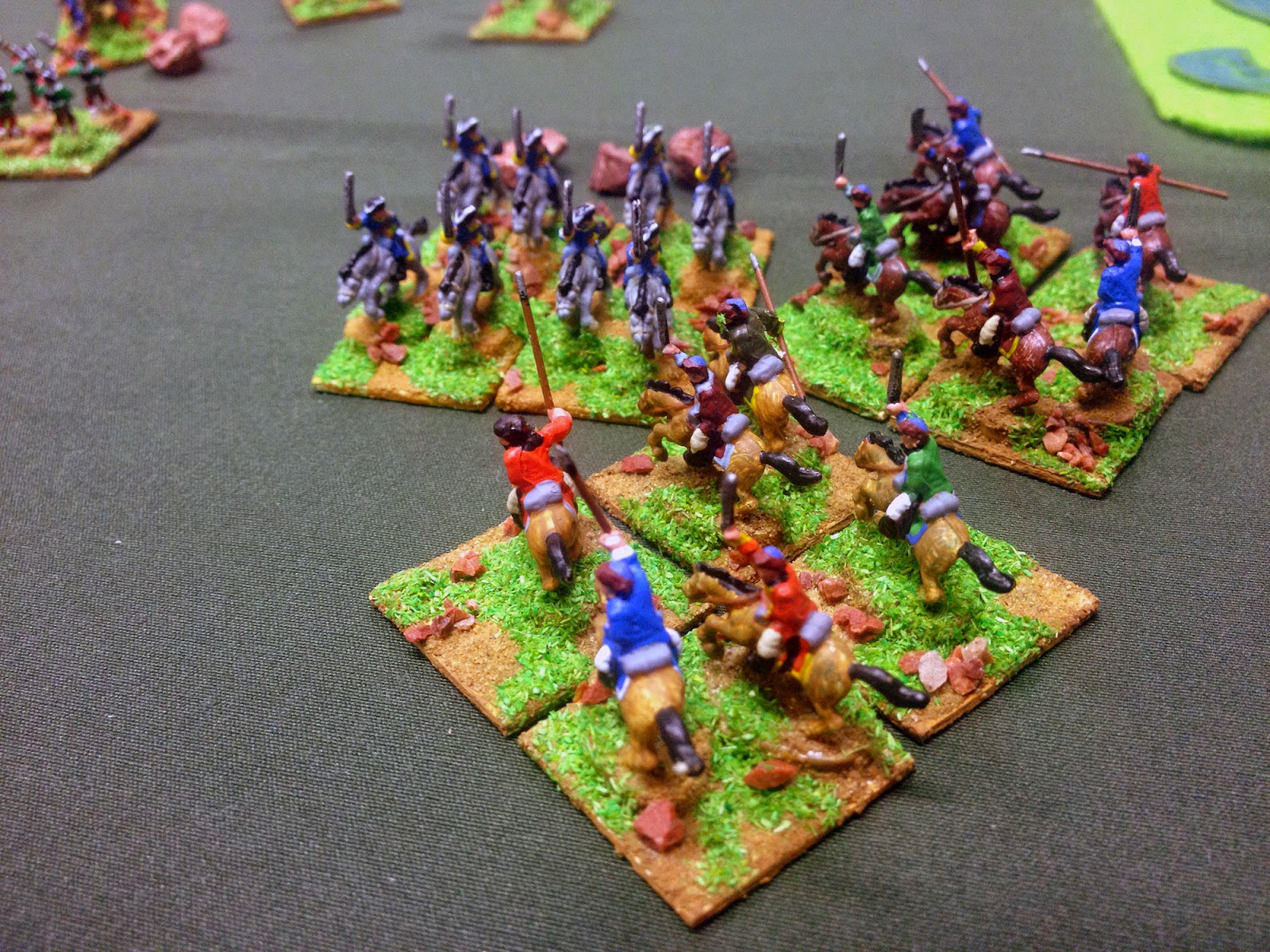 Caesar slowly deployed his columns, swinging one infantry unit at a time into line in front of the Russians, and carefully working the next column around behind it. Over many, many turns he slowly outflanked the Russian right flank. 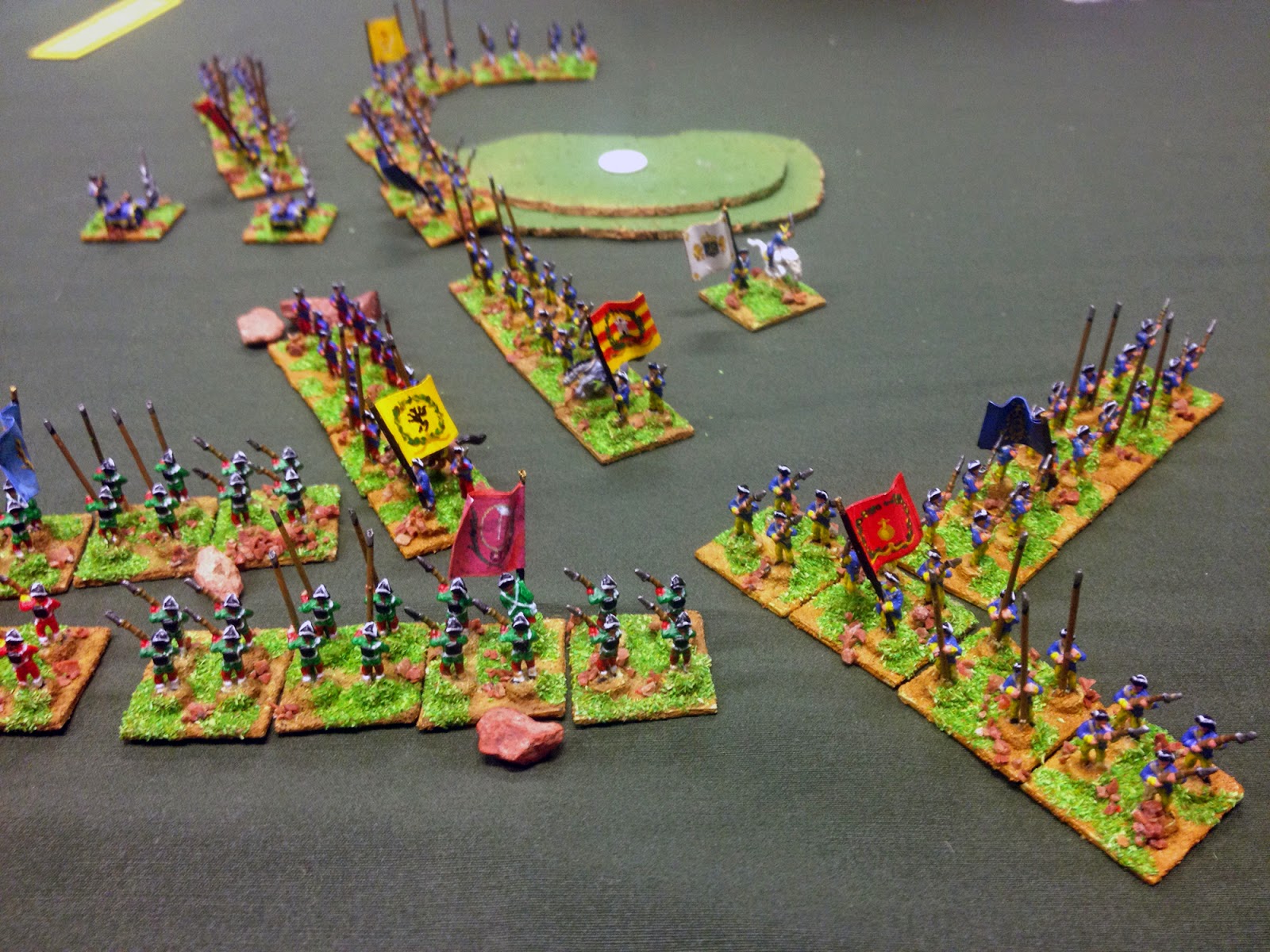 The Cossacks again! This time they charged some Russian infantry in the flank, but this is still the era, and the part of the word, where people on foot use long pointy sticks, and the Cossacks were driven off. 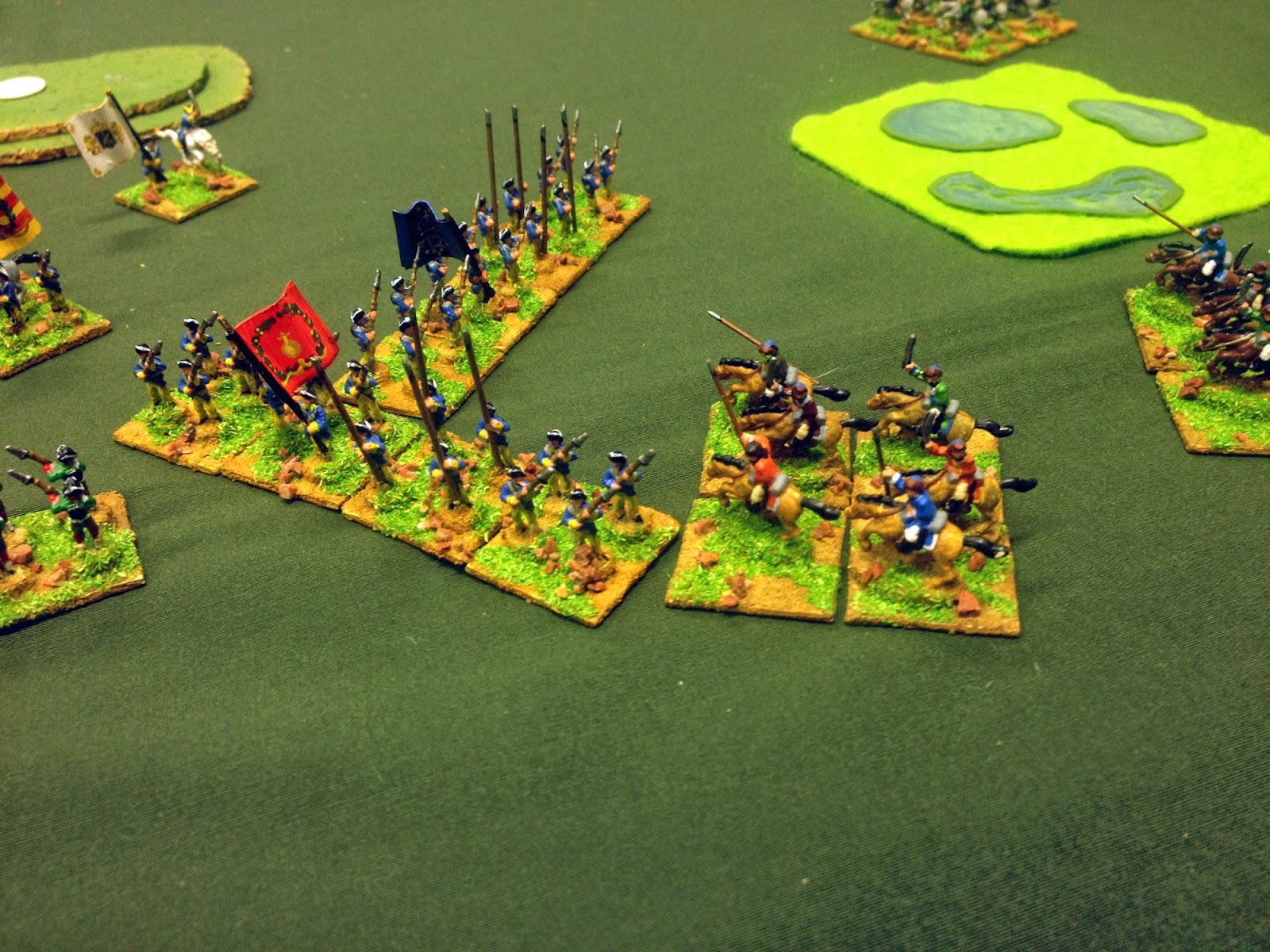 There was a gap in the photos at this stage because things got very intense as the two infantry lines blaze away at each other in a firefight punctuated by the occasional charge and countercharge. The thing with Maurice is that pike-armed infantry units are less effective at firing, so firefights are far less deadly than in later eras. A number of units hovered on the verge of breaking, before rallying and getting stuck back in. Throughout it all, though, Caesar was slowly turning the Russian right, and threatening their guns. He was delayed by the Cossacks again, who stood under fire for turn after turn, failing to charge, but also failing to retreat. By the time they fled - permanently - I had marched the bulk of my left flank infantry over to the right in order to block Caesar's advance. In this picture you can see them forming up in line beside the Russian guns. 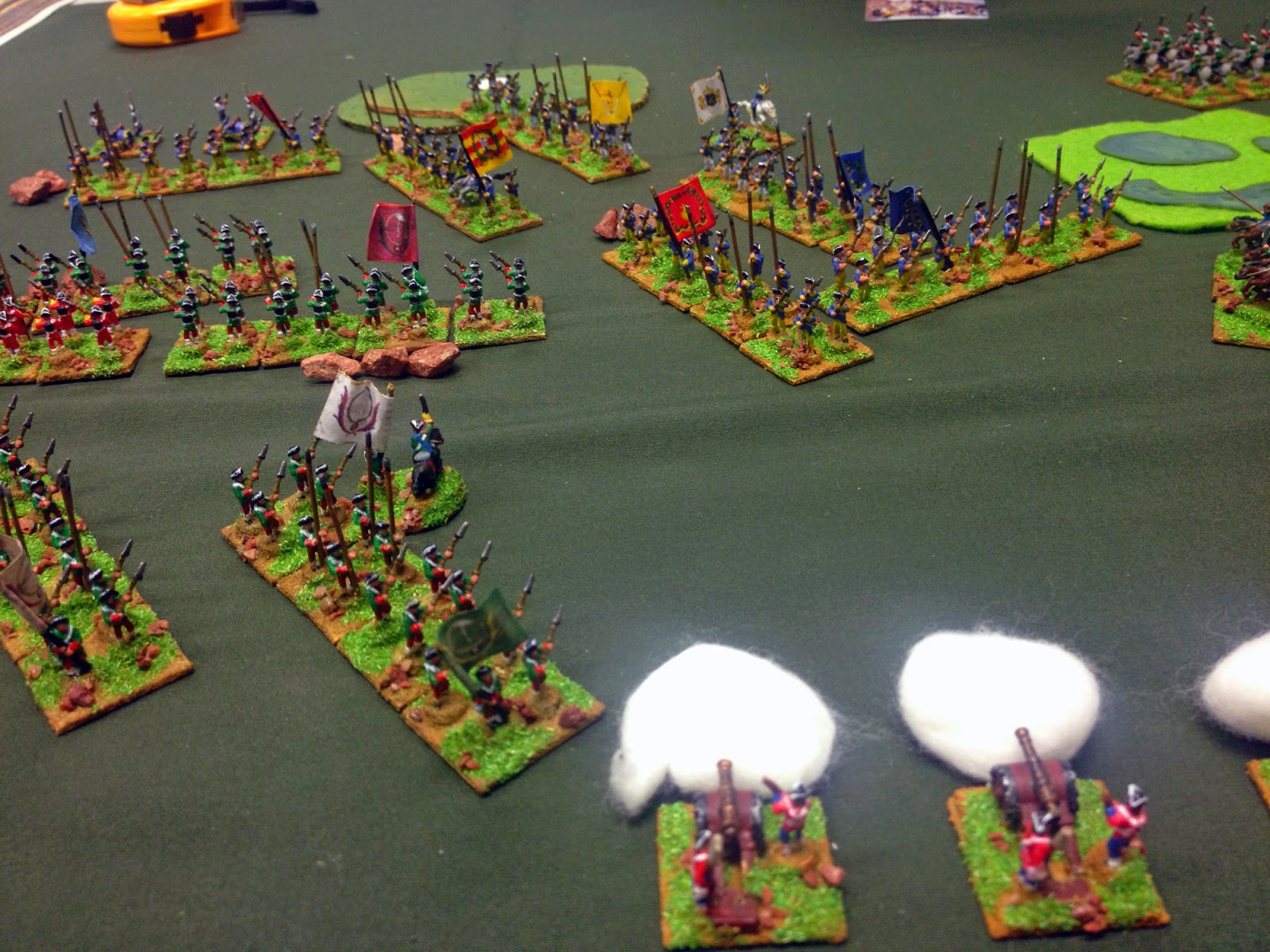 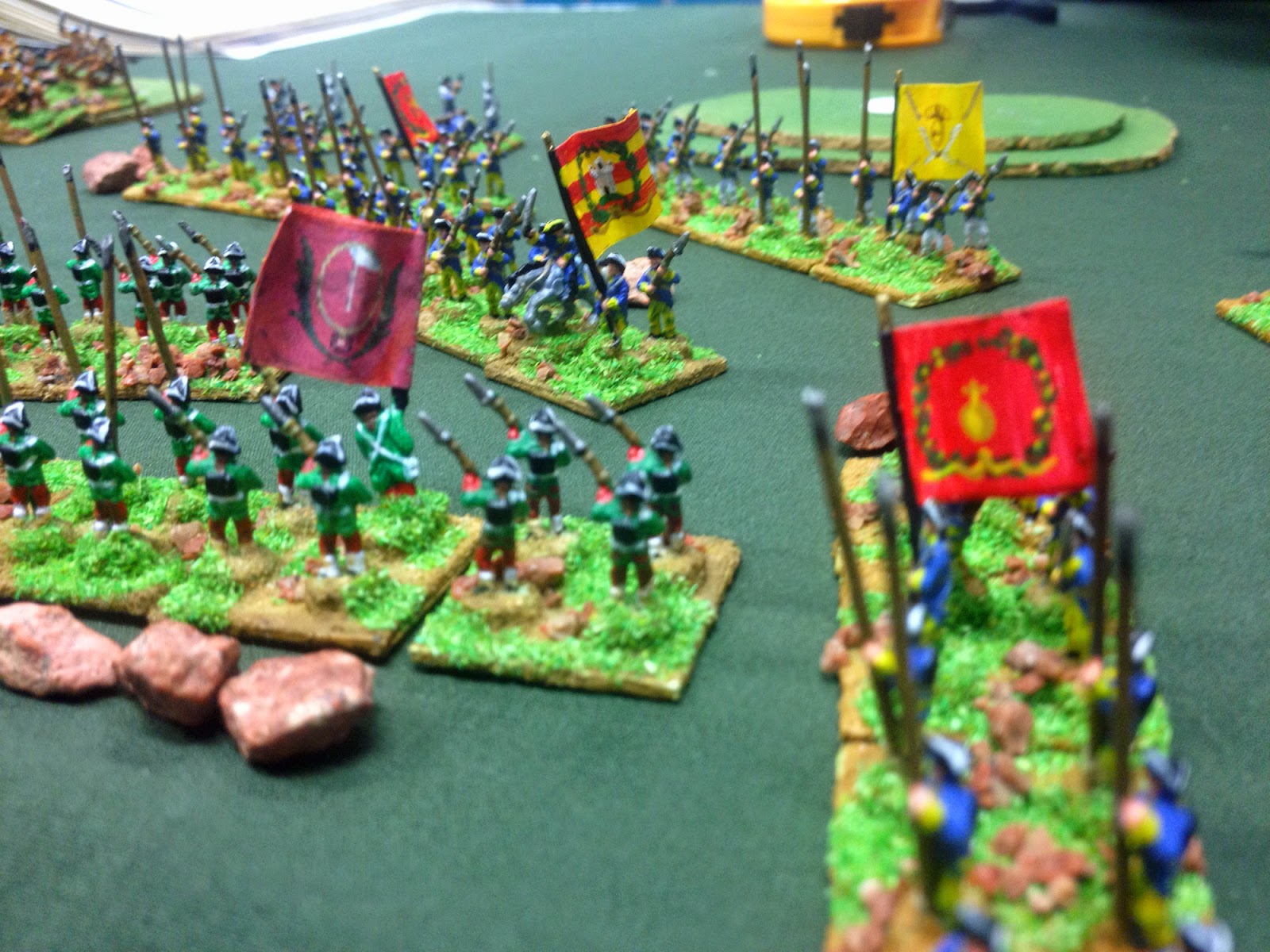 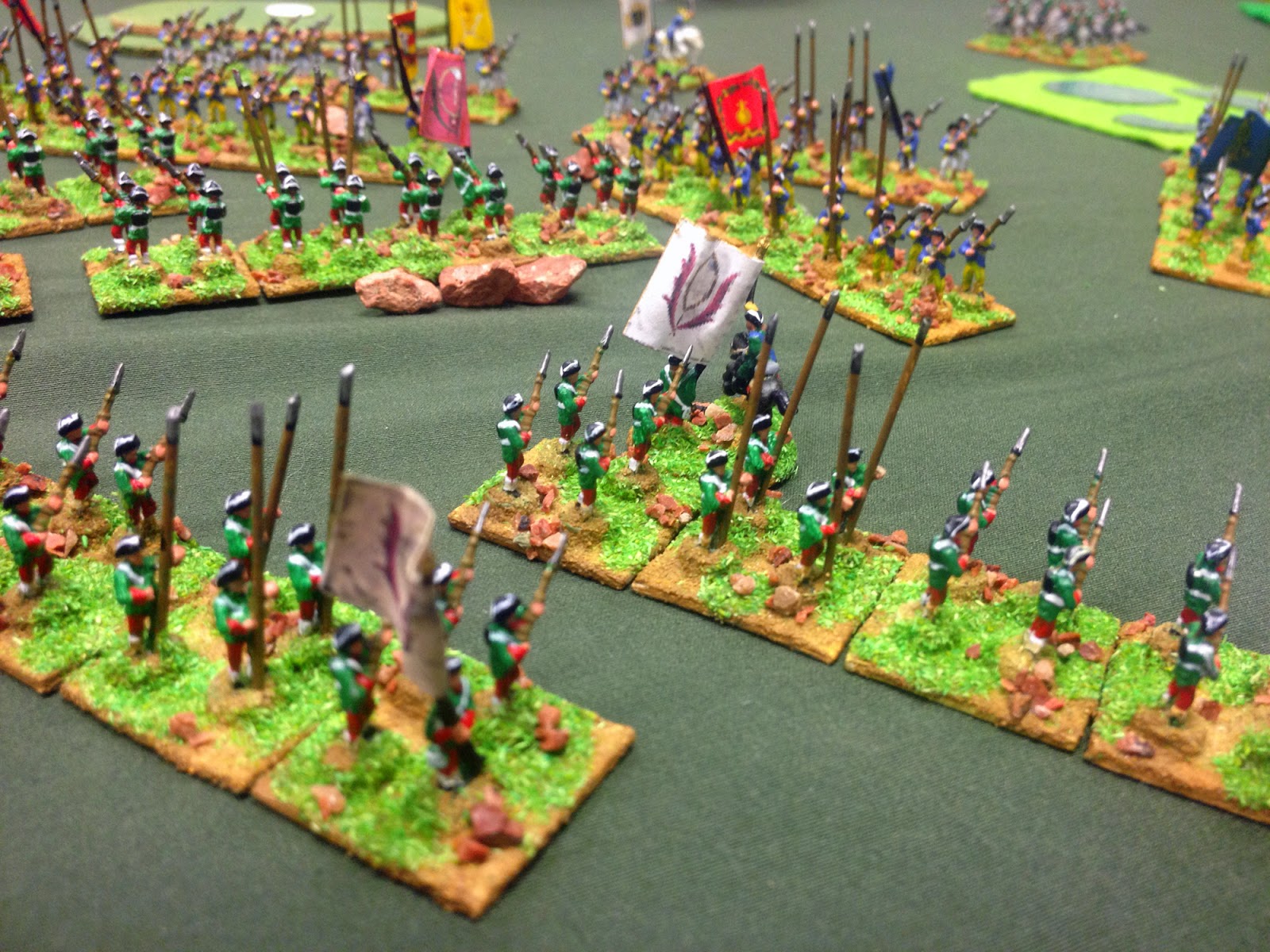 Things got very confused and messy. At this point the Swedes had charged the Russians, but were driven off by the timely play of a Grenadiers Forward card. Russian guards formed up in front of the artillery which, although it had performed well early in the game, was now becoming a vulnerable liability. 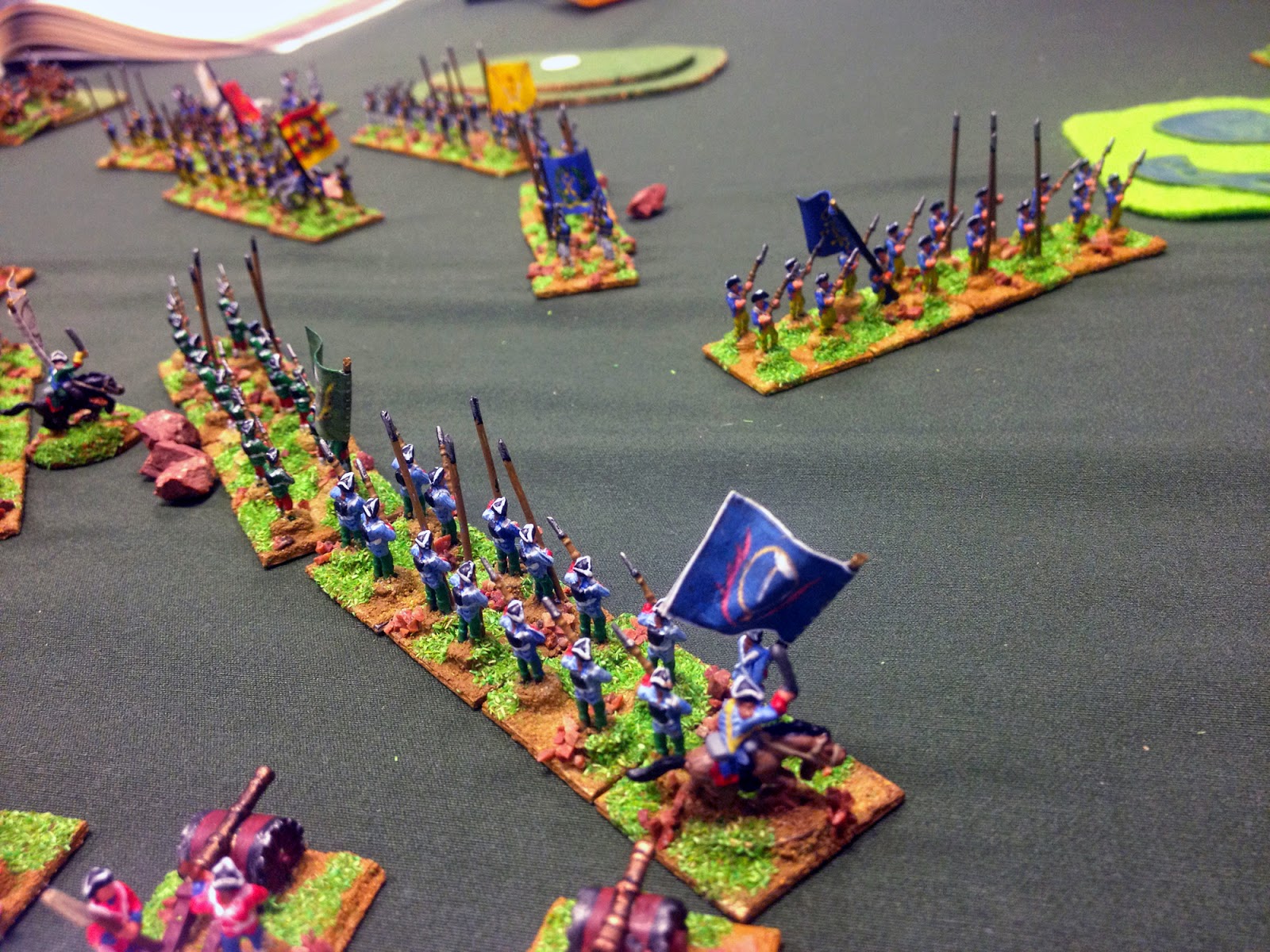 And now the focus of the battle shifted! The switch of Russian infantry from the left to the right had left a gap in their infantry line, and Caesar advanced his cavalry on that side of the battle right though it.  The surprised Russians fired one totally ineffective volley as the horsemen swept past. 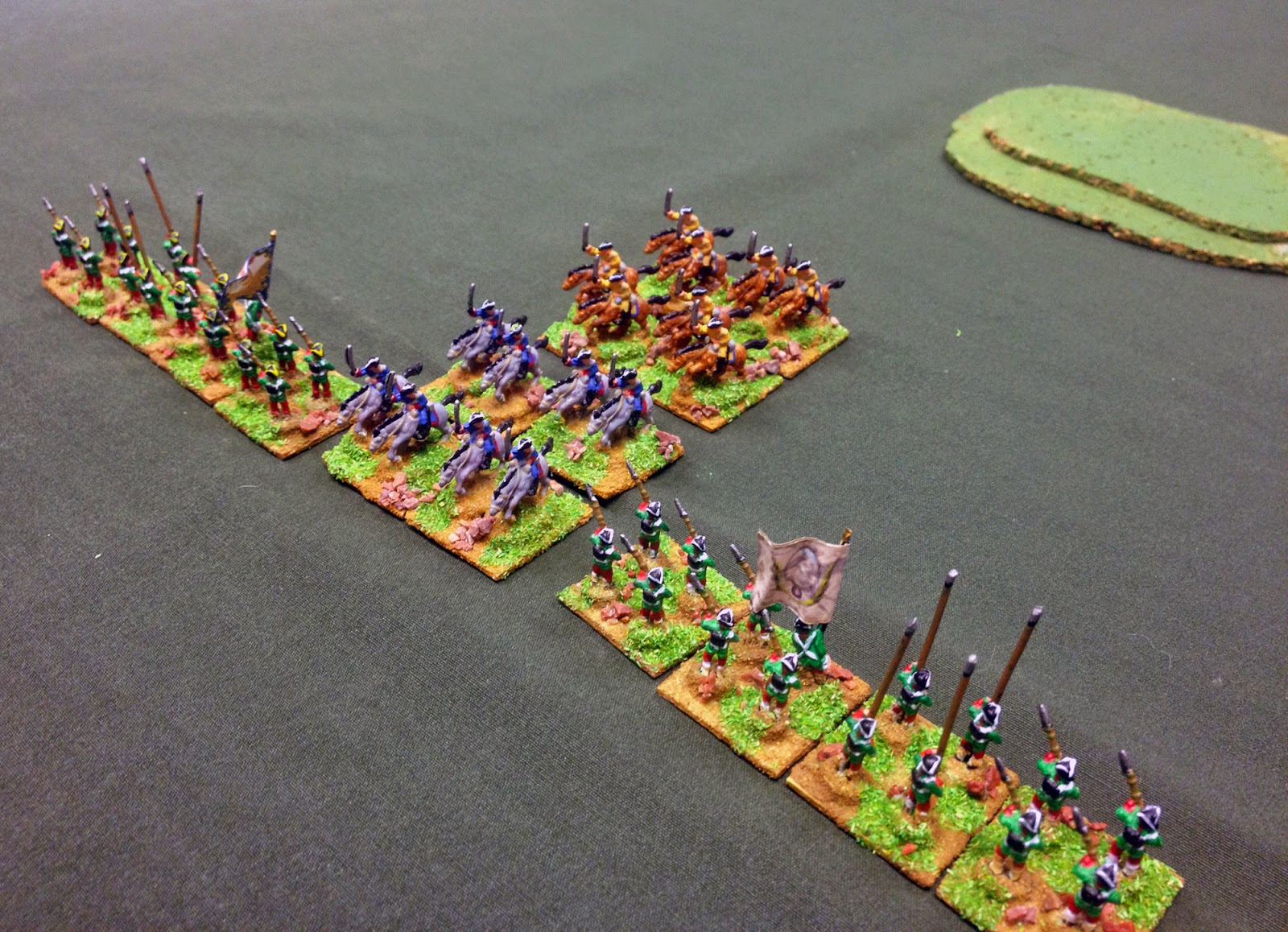 On the other flank the infantry lines were getting more organised. By this stage both armies were getting very close to defeat, with only a handful of  morale points left. 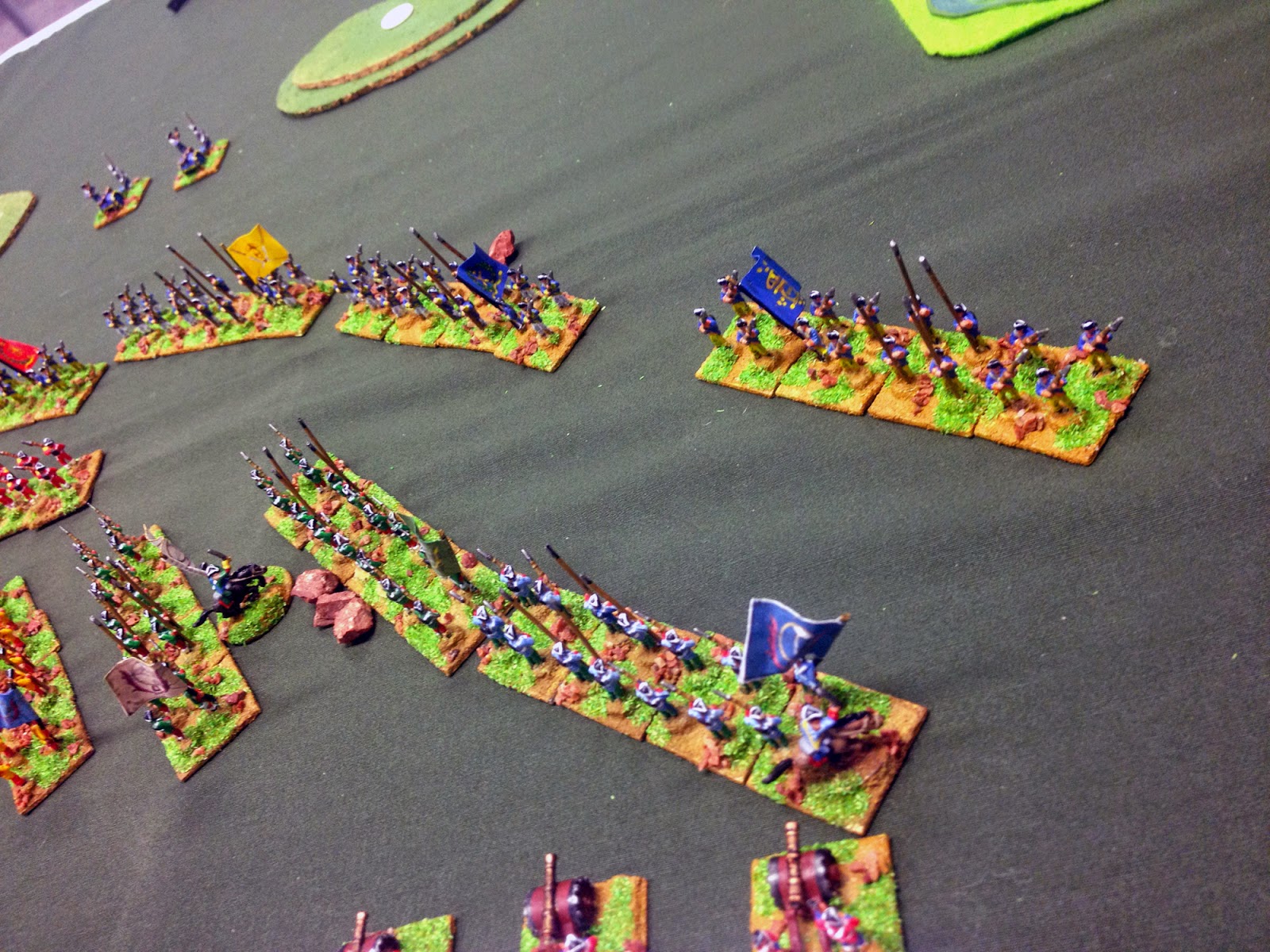 The Swedish cavalry rode dramatically along the back of the Russian line ... 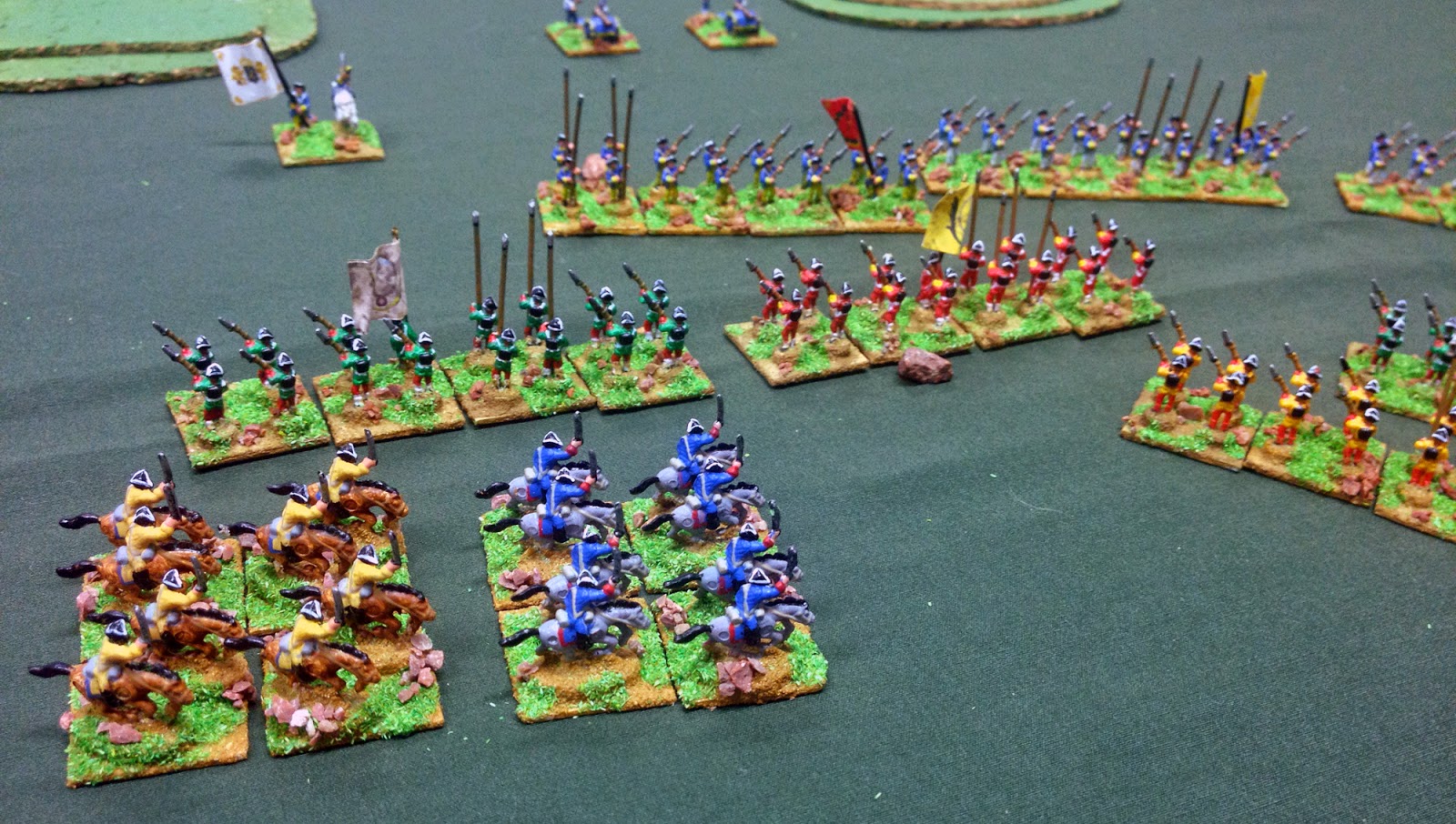 ... and encouraged a Swedish infantry unit to charge in what it thought was support (another event card). The outnumbered Swedes lost the fight, and routed. 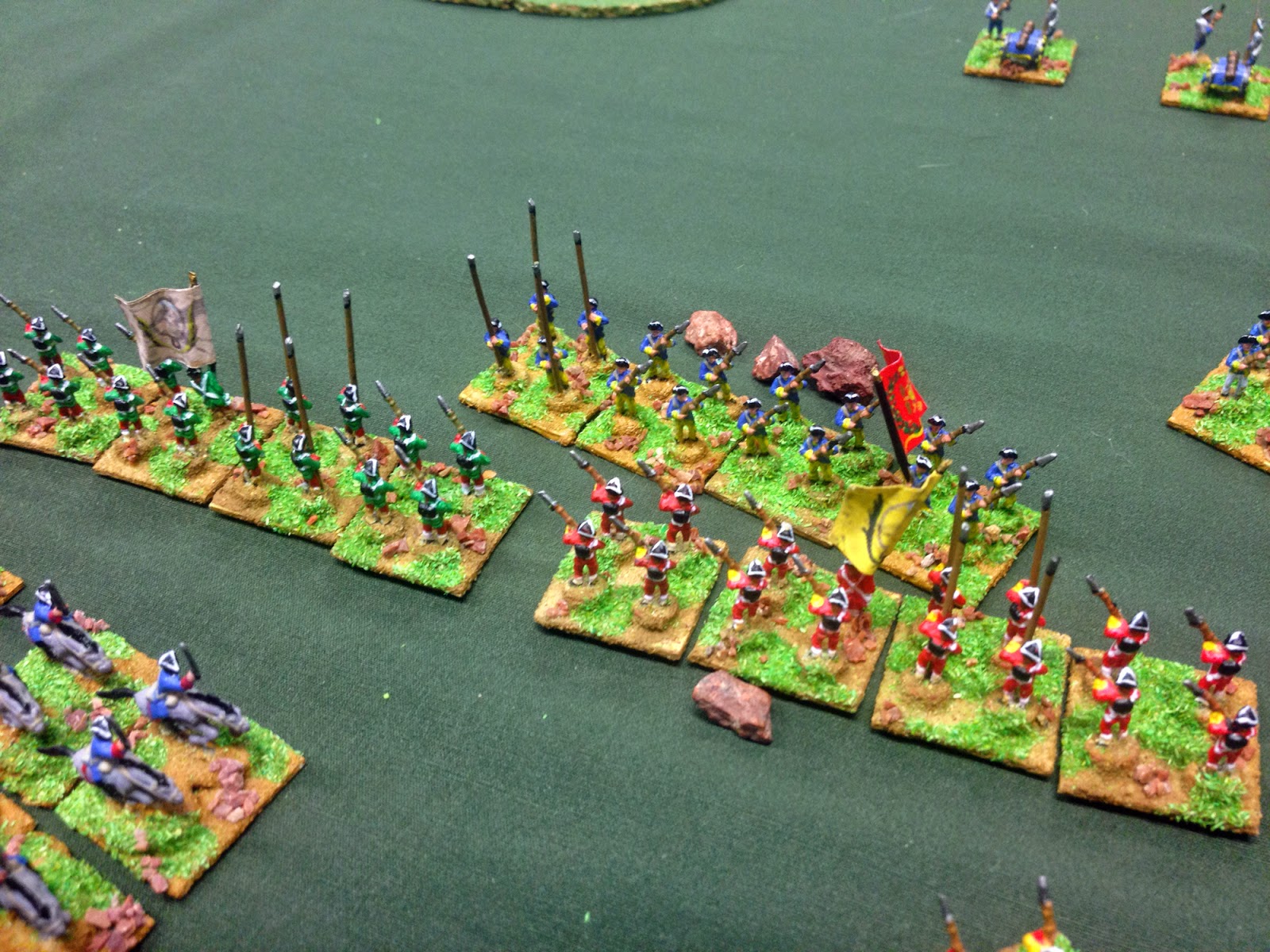 The Swedish cavalry hit the rear of a Russian unit, but couldn't quite finish it off. 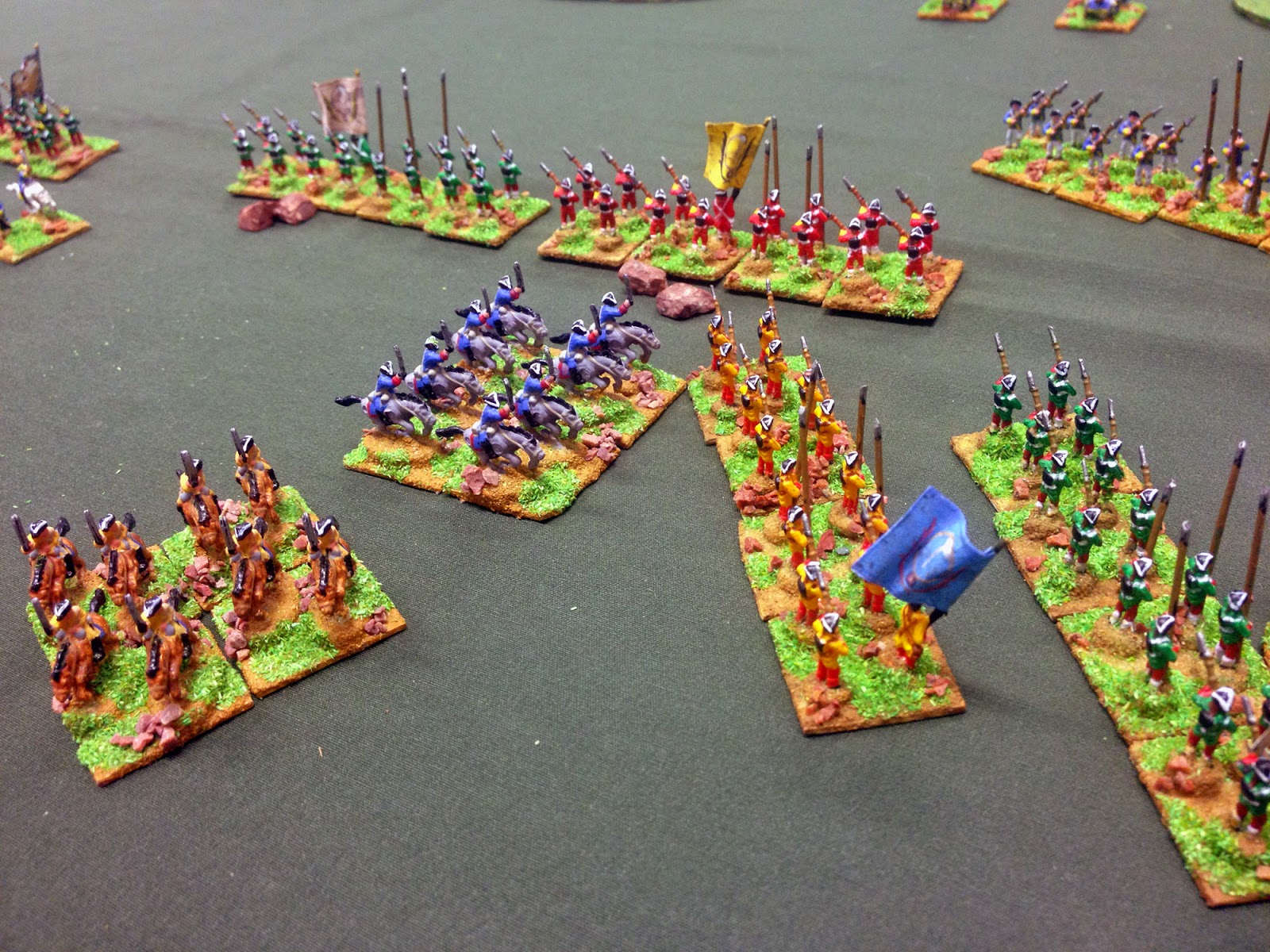 The Russians about-faced, and the Swedes veered off, aiming for the Russian guns, destroying one battery. But their attack had left their hand of cards depleted, and there was a lull in their advance as the Swedish commander paused to reconsider his options (translation - draw a new hand of cards). I exploited this to charge with my infantry, weakening two of the few remaining Swedish infantry units. 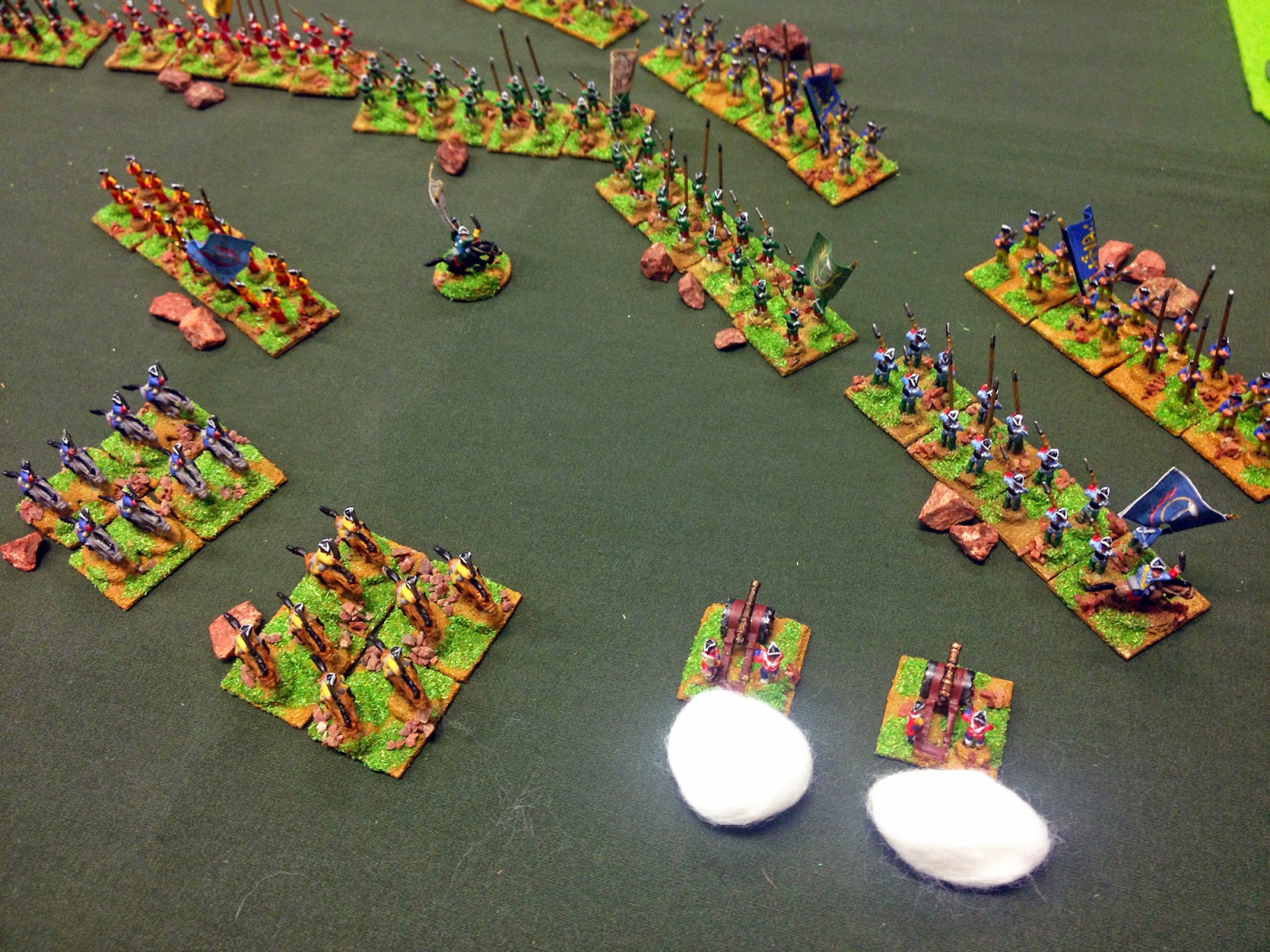 Before the cavalry could renew their attack on the Russian guns, the Russian guards fired a series of deadly volleys which routed another Swedish unit, and that loss was enough to defeat their army. 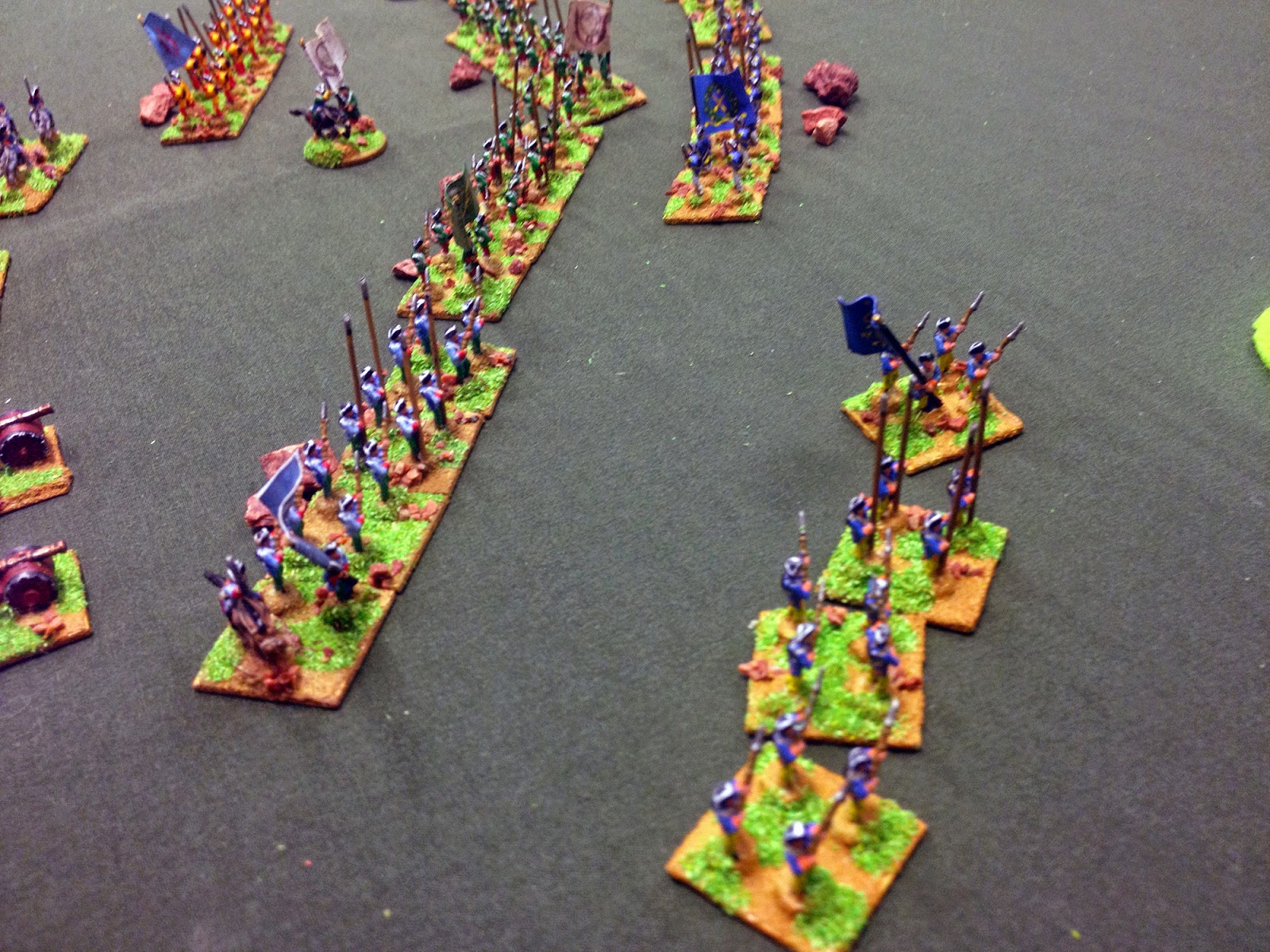 This was the closest game of Maurice I've ever played. The Russians started with 16 morale points, to the Swede's 13, but going into the last turn they had 1 left, with the Swedes wavering on 2. The last Swedish loss took the two points, but the Russians were one loss - of anything - from their own defeat.

Initiative swung back and forth throughout this game, as did the focus of the battle. It was a wonderfully intense and dramatic game; far more so than these pictures or this account can describe. Caesar is a truly cunning Maurice player, and I was lucky to clinch a victory in the face of his careful manuever. A great evening's gaming!