We played a couple of four-handed games of HOTT last night, with each player taking a 24AP army and running it as a 48AP mass-battle.

We kind of threw some terrain together and narrowed the table using rivers (which made for wonky baselines, but that was no big deal). Each of us selected an army, and we split into two teams. Three of us went for knight-heavy armies - Peter went for Crusaders but with a couple of dragons, I went for my Knights of Simba lion-centaurs and Geoff went with the Riders of Rohan. Only Caesar went with a blade-heavy medieval army, supported by a hero/paladin combination.

Here's Caesar and Peter set up, with my Knights of Simba in the foreground to the left and Geoff's Riders of Rohan to the right of them. 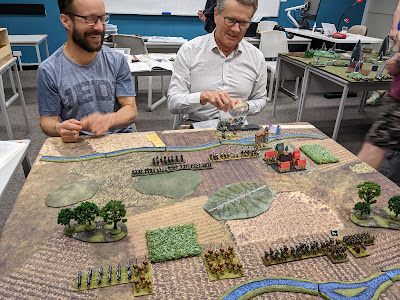 The Knights of Simba - six knights and six warband. I had a patch of bad going in my deployment area and split my army up to go around it. 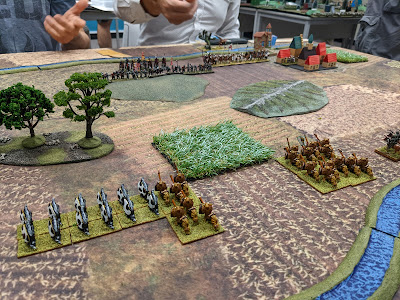 Rohan - six knights, four spears and a hero. They had a clear run at the enemy. 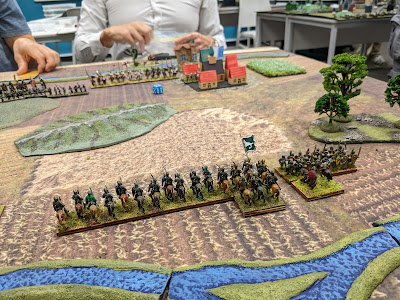 The enemy lined up along a hill and anchored against a village. 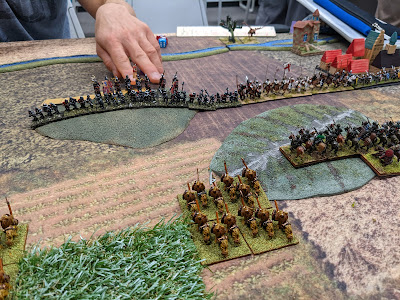 Geoff ploughed straight forward into the attack, whilst I struggled to get the PIPs to organise my troops on the other side of the field they'd skirted. 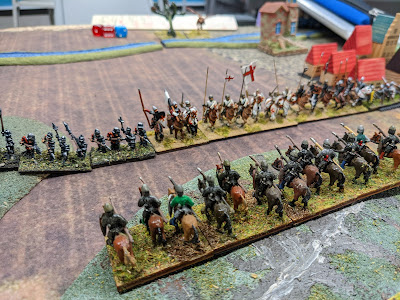 Without my support Geoff's attack was quickly flanked by some of Caesar's evil men-at-arms. 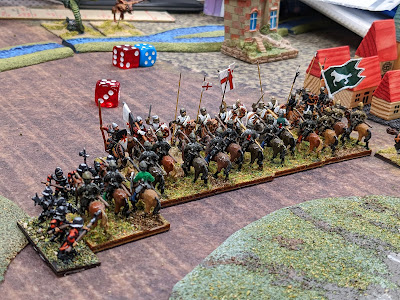 As with any combat involving knights on both sides, the lines soon broke up. Geoff was mostly getting the best of the fight at this stage. And Peter couldn't roll a six to get his dragons on. 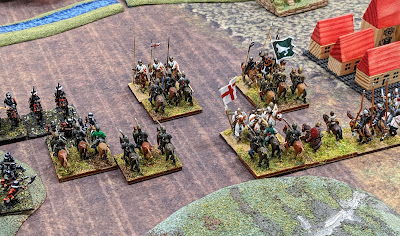 Meanwhile I had advanced on the hill, if only to pin Caesar's troops and cover Geoff's flank. 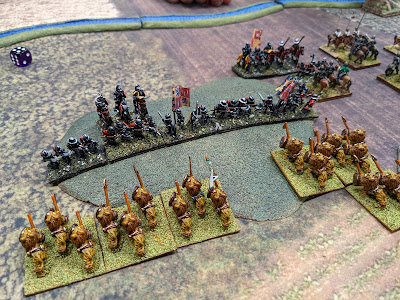 Peter's foot - classed as warband - rushed out of the village and attacked Rohan's spearmen, sweeping may of them away. At this point Geoff killed Peter's general, and teh Crusader army collapsed into demoralisation, with many elements fleeing. Unfortunately those that stayed behind did enough casualties to break the Riders of Rohan as well. 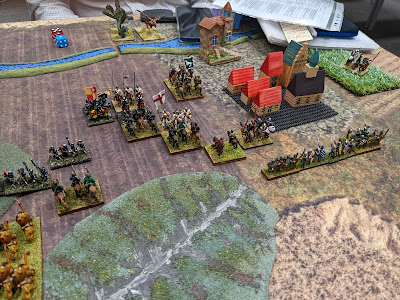 Caesar charged the Knights of Simba ... 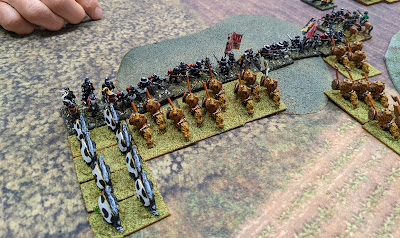 The lion-centaurs were scattered and their general killed. This caused the Knights of Simba to go demoralised as well. 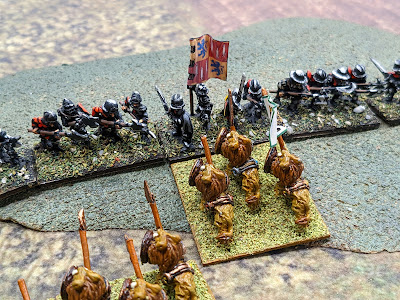 Elements started fleeing across the field, and our side's losses were enough to lose us the game. But it was close; had Peter's entire force of Crusaders fled, their army would have broken, despite Caesar not suffering any losses. 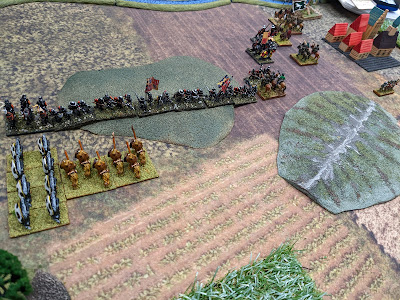 We set up a second game. Geoff had to go, but Dave stepped up in his place and took my Ophidians, with their three magicians. I used The Knights of Simba again, Caesar kept his blades and Peter swapped the dragons for an aerial hero.
This time I was quick off the mark with an attack. The aerial hero (an eagle) came in on my flank. 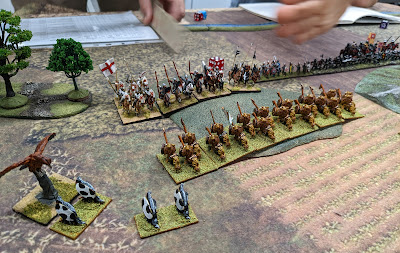 Dave took the Ophidians on a slow flank-march through a wood, so this game was kind of the reverse of the previous one in terms of one flank being delayed whilst the other attacked. 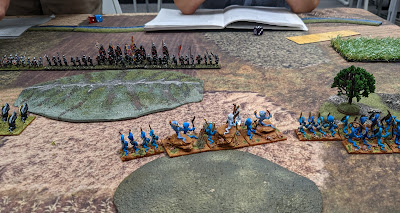 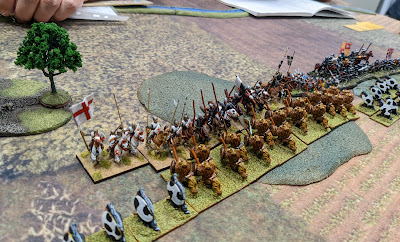 My general was hit in the rear by the aerial hero and destroyed. Once again his army became demoralised. 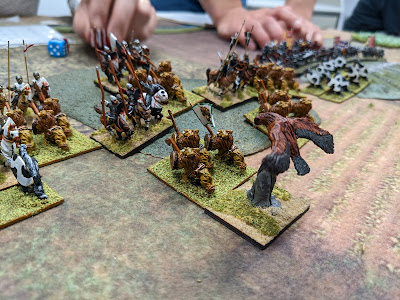 I tried to hold the troops together, but Peter and Caesar whittled the survivors down (that -1 for being demoralised is a killer). My last element was surrounded and destroyed. This broke our army. 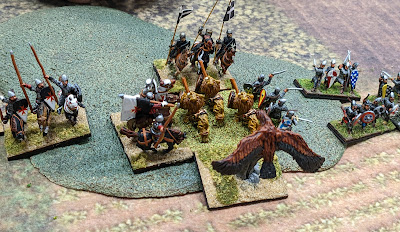 A shame, because Dave had finally got the Ophidians in position for an epic flank charge. They didn't lose a thing. Neither did the enemy. 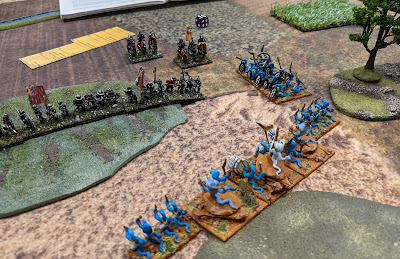 48AP is an odd size for a big HOTT battle. Since you lose the battle at 50% losses this equates to losing one of your two commands, so if a command goes demoralised that's pretty much it. With 72AP you have three commands, so losing one will, on average, only cost you a third of your army - two-thirds of the way to a loss, it's true, but enough to keep you in the game maybe.
Posted by Kaptain Kobold at 15:08