Last year I ran a club game of Galleys & Galleons featuring a battle between two large (for the game) forces of 16th century galleys. Today I set it up at home and ran it again.

The Turks had three lanternas (flagships), seven galleys and five galliots. The Venetians fielded three lanternas (also flagships), five galleys, four galliots and two galleasses. Both sides had their fleet split into three commands, each led by one of their lanternas. The stats for the ships were lifted straight from the rules - the galleys, lanternas and galliots from the basic set and the galleasses from 'Fayre Winds and Foul Tides' (there is a galleass in the basic rules, but it lacks the heavy fore and aft gunnery of the other version).

So there are at total of 29 ships in play, and roughly 870 points per side; I made up a 12pt shortfall on the Venetian side by making one of the lanternas 'Charismatic'.

Activation was by cards; each side had three cards, one for each command, and they were drawn at random with that corresponding command being allowed to attempt activations. Here's the two fleets set up, with the cards ready to be shuffled. The Turks are at the bottom on the picture and teh Venetians the top. 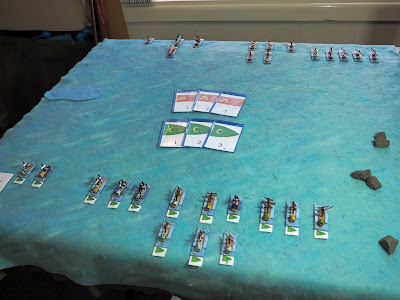 The position at the end of the opening move. You can see how the activation system has broken up some commands already; the Turkish centre and Venetian left both suffered failures that meant that not all of their vessels moved. A couple of Venetian ships had tried long-range shots. 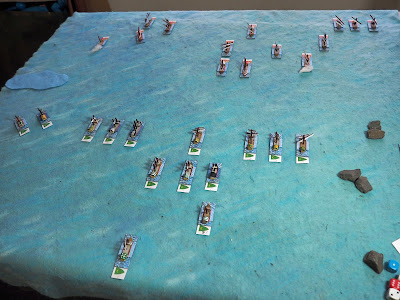 Another shot of the opening moves, showing the Turkish right. 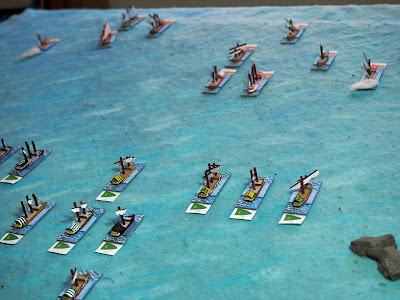 The Turkish left closed up rapidly and took the Venetian galleasses under fire, shredding the rigging of the lead one, and leaving it virtually immobilised. 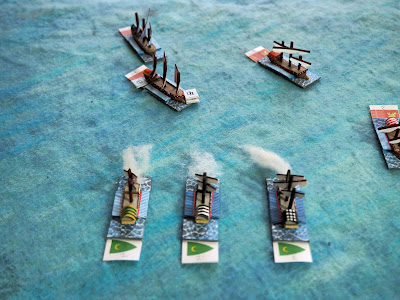 In the centre Turkish gunnery caused a Venetian galley to catch fire. The crew managed to extinguish it however. 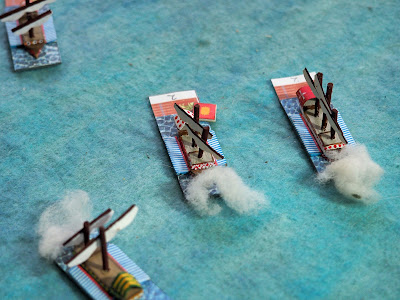 The action was developing nicely now, with plenty of gunnery across the board, and some ships taking damage. The Turkish centre still hadn't moved up, and the Venetian left was still slow as well. 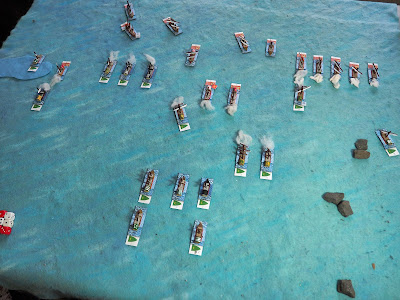 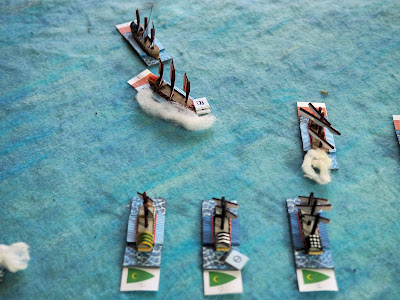 The second galleass came up as well. The gunnery from these ships is fearsome, even when firing to the bow or stern. But they aren't easy to control. 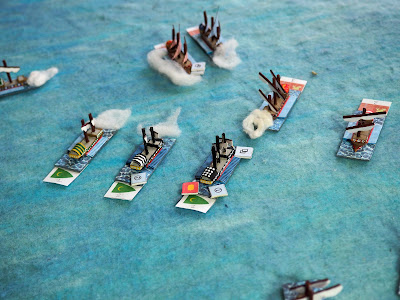 The flagship of the Venetian centre pushed ahead in an aggressive attack. This is the one with the Charismatic trait, which affects the quality of enemy ships close to it, so it made sense to get stuck in. 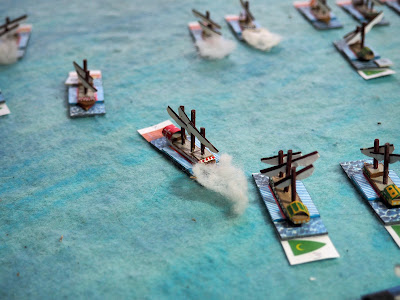 The Venetian centre was pushing forward fairly aggressively, whilst the Turks attacked past them against the inactive Venetian left. In the distance the Venetian right - the galleasses, and the Turkish left were hotly engaged. To the bottom left you can see a couple of galliots from the Turkish centre being dispatched to reinforce the attack on their right. 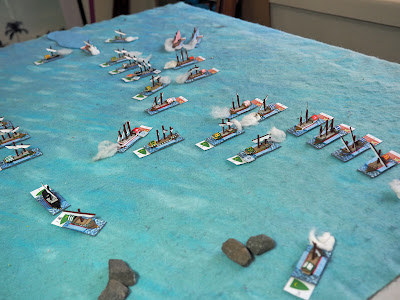 Disaster on the Turkish left! Their flagship on that flank caught fire and exploded. 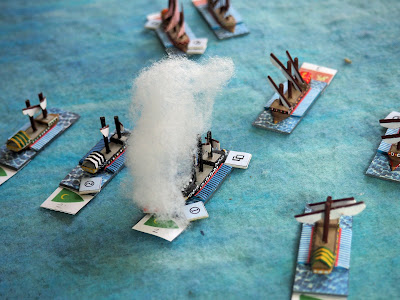 This was rapidly followed by one of their galleys being crippled by fire from the second galleass. After a promising start things were not going well for the Turks on this flank. 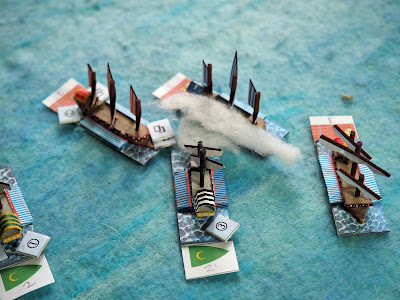 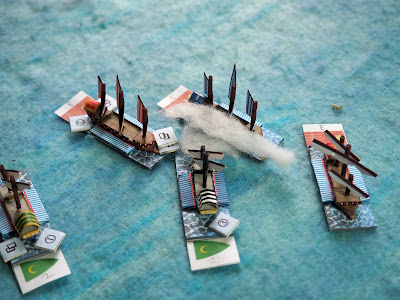 Under sustained fire the galley sank, leaving the Turks down two ships. 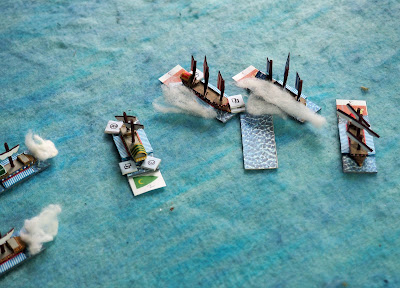 On the other flank the Turks had softened up the Venetians with gunfire and now rushed in to board them. Boarding is riskier, but can give a quick decisive result if used at the right time. 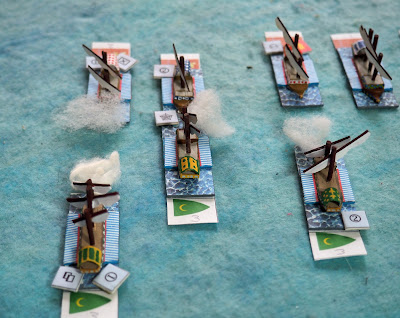 An overview of the action at the end of another turn. As you can see it's reached the chaotic stage. Across the board you can see ships closing for boarding though. 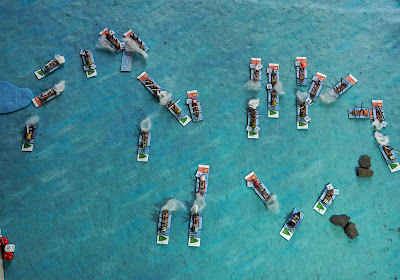 Several boarding actions were taking place on the Turkish right, and one of their ships had already struck. 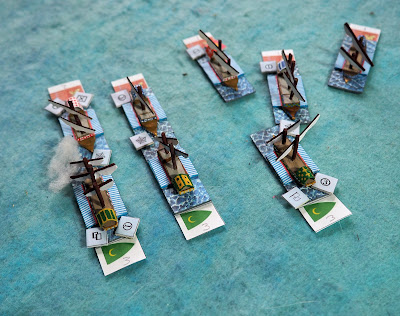 After a slow start the Venetian left was now working it was around the Turkish right, opposed by a handful of galliots.

The Turks mobbed the flagship of the Venetian right as the second galleass moved through the action still firing. 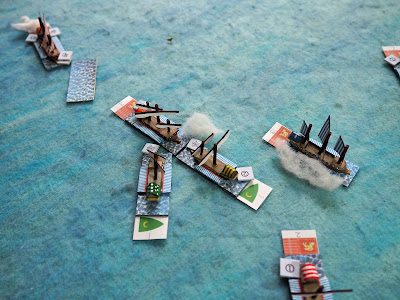 One of the Venetian ships exploded. 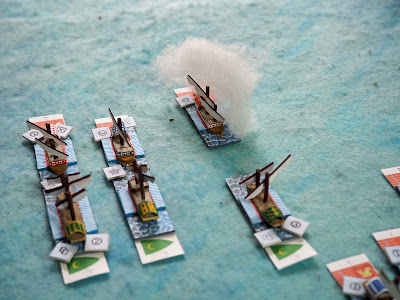 It caused two nearby ships to catch fire, and one of them - a Turkish galley, also exploded. 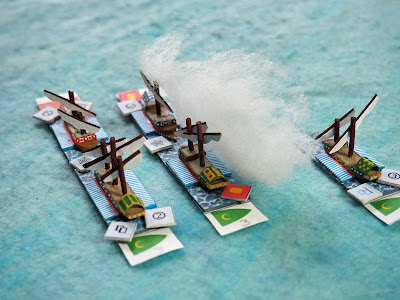 Another Turkish ship, shattered by the first galleass, burned and sank. 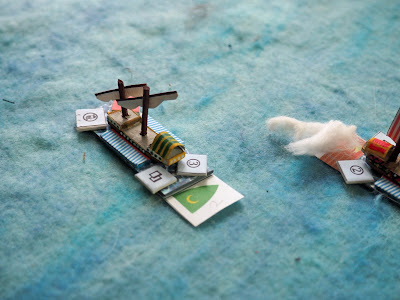 Furious action on the Turkish right as teh Venetians continue to push through. 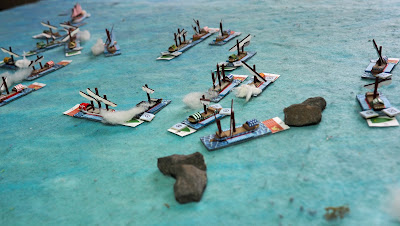 And a couple of large boarding actions in the centre. 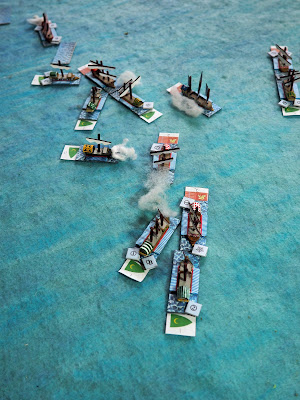 In the centre the lead galleass was damaged after a collision with a Turkish galliot. 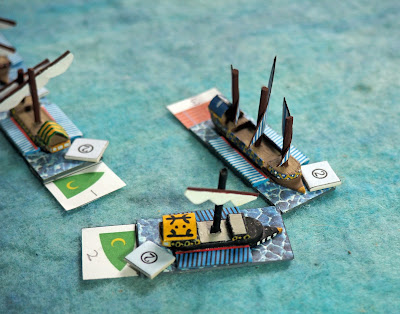 And a success for the Turks as they take a Venetian flagship by boarding. 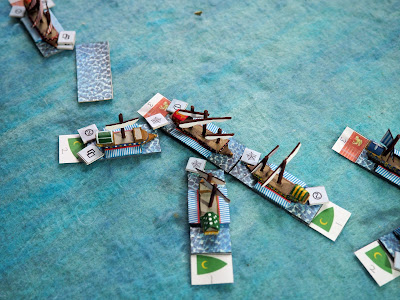 Another overview of the action. By this stage the Turks were suffering badly, and would need a miracle to come back from the brink of defeat. 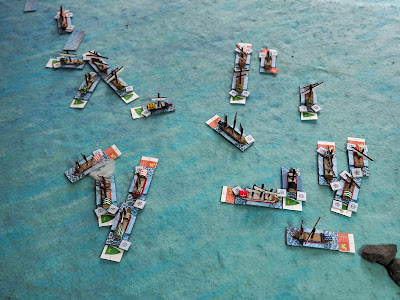 Sadly there was no miracle. I called the game in favour of the Venetians.

Here's the lineup. At the top are the active ships, although most were damaged. the Turks still had four, whilst the Venetians had ten. The second row were crippled ships, of which teh Turks had two. Below that the ships that struck; five Turkish and three Venetian. And finally ships that exploded or sank - the Turks lost for this way and the Venetians just one. 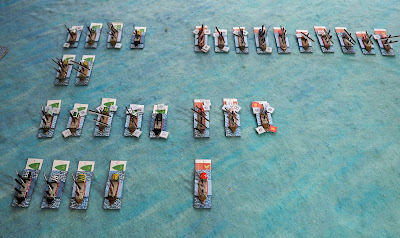 So a convincing win for the Venetians in a scrappy, confused and entertaining battle.