I've had a something of a lack of drive to do any gaming for the past week or so, but finally put some figures on the table yesterday. In fact I'd planned to play this a couple of weeks ago, but there was a Cat Incident and some of the vessels I wanted to use have been in teh shipyard for minor repairs.

Anyway, we've been watching 'The Great' recently, which is a lot of fun albeit a bit wonky in terms of historical accuracy. It got me inspired to try a Russo-Swedish action in which both sides had a mix of conventional sailing ships and some galleys.

I gave both sides the same forces. They had two squadrons, one of sailing ship and the other of galleys. For the sailing ships I used the stats for this scenario; there was a huge flagship, two smaller ships of the line and a frigate. I lifted the galley stats from the book - both sides had a lanterna flagship and three galleys. 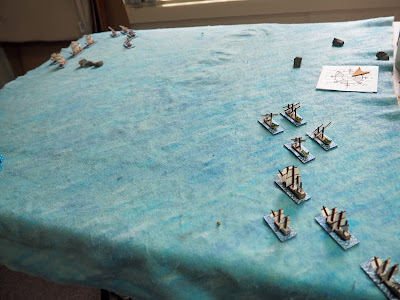 The Russians had to work around some rocks. They sent their galleys straight forward, whilst the sailing vessels headed south, looking to intercept and cut the Swedish line. 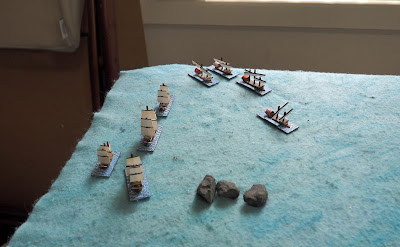 Early moves saw the Russians rounding the rocks and heading towards the Swedes, who turned to meet them. Both sides were rearranging their galleys; failed activations had broken up their lines a little. 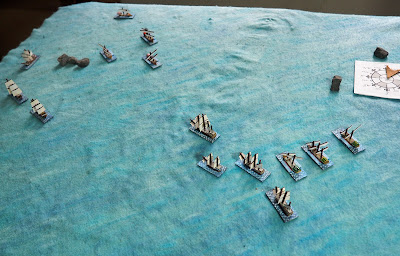 The first shot; a Russian SoL opened up on the Swedish flagship. 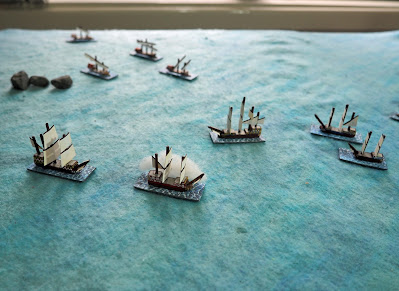 Two Russian galleys fired on a Swedish SoL as it turned into the action. 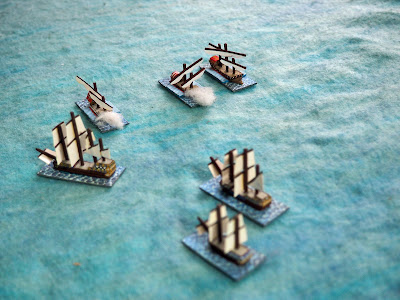 Both sides' galleys now clashed, with the Swedes rushing to grapple and board the Russian flagship galley. 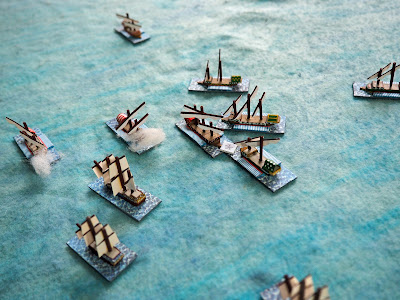 Meanwhile the sailing ships sailed past each other with little firing; the wind shifted to the north, and what limited actions the ships got were spent trying to keep formation and avoid collisions as the weather changed. 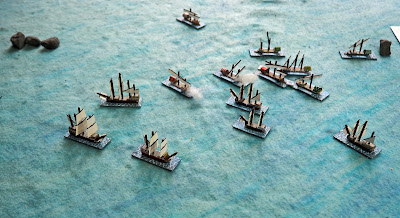 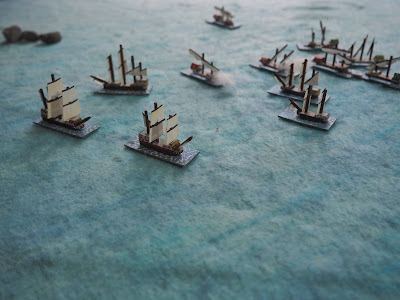 The Russians caught the Swedish frigate, and shattered it in two broadsides. 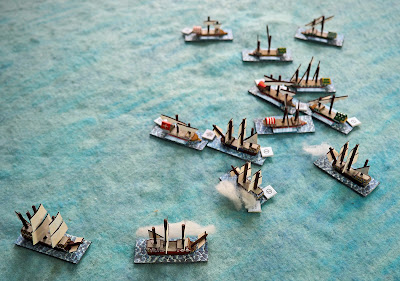 Meanwhile the boarding actions on the galleys grew in intensity. Disaster struck for the Russians when their outnumbered flagship surrendered. 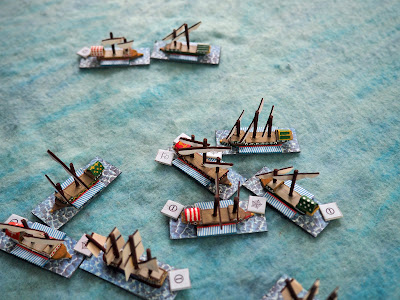 The Swedish frigate blew up. 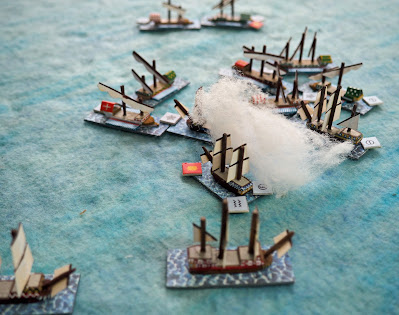 A Russian SoL damaged the flagship of the Swedish sailing squadron. However the Swede would now also spend teh rest of the action tacking to get back into the fight. 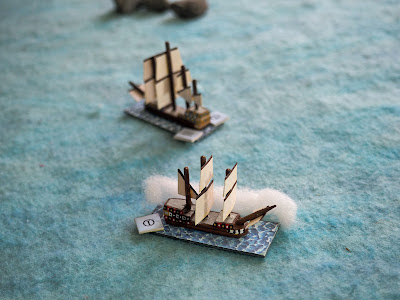 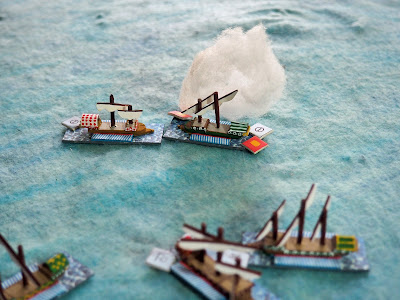 An overview of the action. The Russian galleys had suffered badly in boarding actions, and three of them had struck. The Swedes were suffering damage, but their vessels were still fighting. And the Russian sailing ships were now stuck downwind of the fight and unable to close effectively with their opponents. 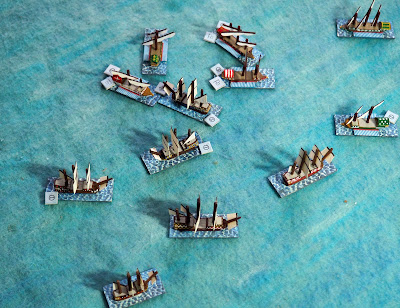 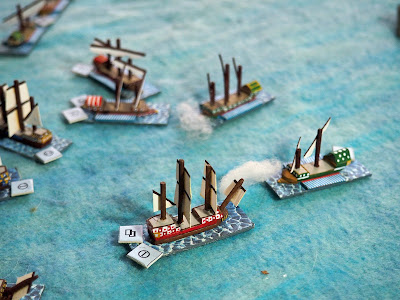 The Swedes lost one of their SoLs when some confusion of orders saw it collide with a struck Russian galley. The crew abandoned the badly damaged vessel. 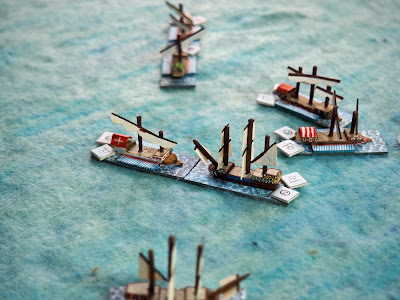 One of the Russian SoLs was locked in a gunnery duel with the flagship of the Swedish galley squadron. It would come off worse. 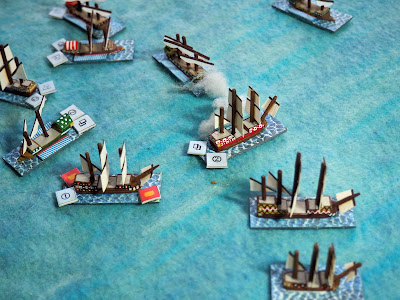 The other Russian SoL caught fire, and soon became an inferno, before it too exploded. 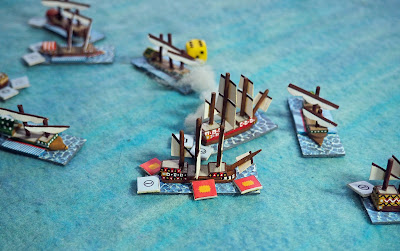 With all of their galleys struck, and two SoLs lost, the Russian flag and accompanying frigate fled the action. 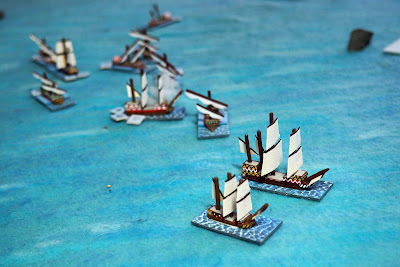 The combination of ships was interesting and something I'd like to explore again. Galleys are obviously not reliant on the wind, but their downsides are that they can't do the powerful full broadsides/rakes of the sailing ships, and that they need to expend activations to move. In this game the sailing ships of both sides suffered horrible activation failures and a really inconvenient shift in wind direction, so were never able to really exploit their advantages.
Posted by Kaptain Kobold at 12:40